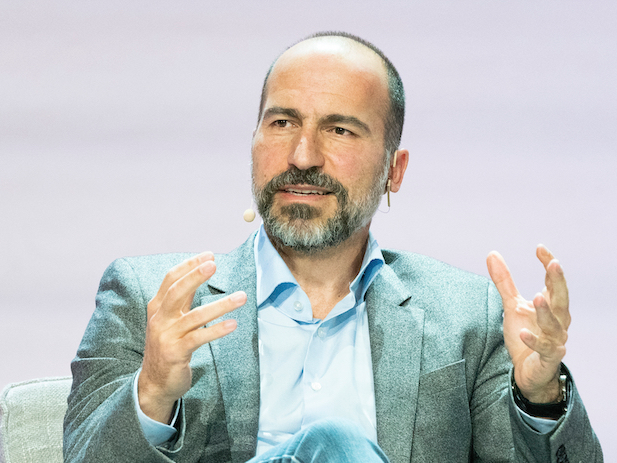 Photo by Amy Harris/Invision/APUber is doubling down on food delivery to offset losses during the pandemic.

Uber’s efforts to diversify outside of ride-hailing will continue for the foreseeable future, CEO Dara Khosrowshahi told NDTV in an interview Thursday evening.

“I think it’s going to be 50-50,” Khosrowshahi said, in response to a question about how he expects Uber’s business will be split moving forward between ride-hailing and other divisions like food delivery, which has exploded during the coronavirus pandemic.

“Our delivery business is growing at rates that, frankly, I didn’t think was possible, and we have doubled up on that.,” he said. “So we’re augmenting the organic growth with acquisition as well and I think we’re cementing a real leadership position in what’s going to be a very, very big market going forward.”

Uber announced Monday that it plans to buy Postmates for $US2.65 billion in an all-stock deal that could significantly boost its share of the US delivery market. Weeks earlier, its acquisition talks with Grubhub fell through amid rumours of antitrust concerns and disagreements between Uber and Grubhub leadership.

Uber’s expansion into food delivery comes as the company is looking to offset substantial losses during the pandemic, which caused rides to plummet as much as 94% in March. While Uber said rides have rebounded slightly, it still reported $US2.9 billion in losses for the first three months of this year and laid off more than 14% of its workforce in May in an attempt to cut costs.

Food delivery has also been massively unprofitable – both for delivery providers and restaurants. While the company said it saw a 52% jump in Uber Eats orders last quarter, it still lost $US313 million on the business.