'Nobody's making money in this business': Uber's CEO defends a possible GrubHub merger amid criticism of the reported merger talks 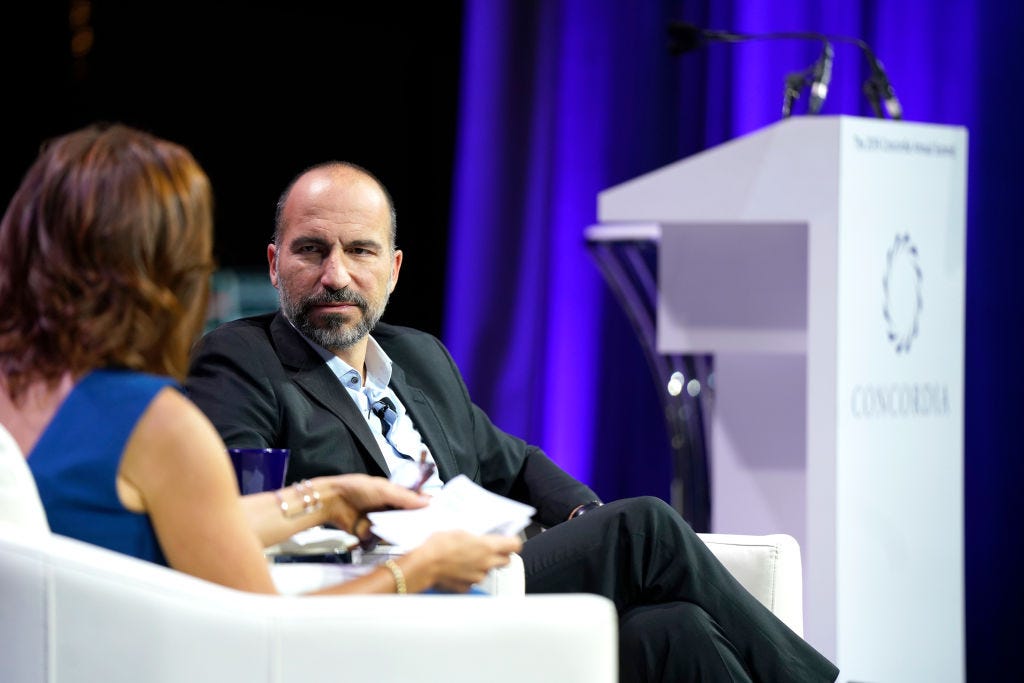 Cries that a combined Uber and GrubHub could control up to 90% of the food-delivery market are overblown, according to chief executive Dara Khosrowshahi.

As everyone from grocery stores to independent restaurants and chains make the switch to delivery amid the coronavirus pandemic, the market is growing too rapidly for any one business to grab such a dominating lead, he says.

“This market is much broader than some people are presenting it to be,” Khosrowshahi told Kara Swisher on an episode of Recode’s Decode podcast published Monday. “Restaurants deliver directly, Dominoes, et cetera, delivers directly, grocery is delivered directly including hot food, so I think that I would disagree with the definition of market. This market just got bigger … I think that this delivery of food and essentials to homes is an enormous market, and I don’t see any one or any two having 90% of that market. It’s way too big a market.”

Indeed, the market share of a combined GrubHub and Uber may not reach 90%. Depending on which estimates you read, the delivery powerhouse could command upwards of 50% of the US market, but most fall short of the 90% figure. Still, as reports of the merger talks began to leak, pushback came swiftly from Democratic lawmakers who called the unconfirmed move “pandemic profiteering” and urged federal regulators to scrutinize any forthcoming deal.

“We always have to be concerned with their concern because these are important people that you’d have to listen to,” Khosrowshahi said. “We have been a highly regulated and locally regulated business for a long time and will continue to be. If the concern comes from restaurant partners making sure that the restaurant business is sustainable and they can grow. If the concern comes from couriers getting paid, that’s a great concern. If it’s from people being able to afford this, the food being affordable and available to everybody, we are aligned in that direction.”

But, like ride-hailing, the food-delivery industry will need some form of consolidation and rationalization in order to fully thrive, he warned. In rides, for example, both Uber and Lyft had to work toward fewer coupons and promotions to pad profits and ease financial losses for the segment. In delivery, it all comes down to scale.

“The thing is, no one’s really making money in this business,” Khosrowshahi continued. “So the business itself has to be sustainable, and it has to be sustainable in a way that works for restaurants, works for couriers, and works for people who are ordering the food and it works for business, as well. So things are going to change. And we’ll definitely listen to the opinions of regulators.”

After taking out what Uber pays to couriers, Khosrowshahi said the company makes about 12% of any order’s total. The goal, he said, is to get that figure closer to 15% by “scaling the business and really, really growing it.”

Khosrowshahi also took a shot at DoorDash, which in 2019 was found to be including some tips to couriers as part of guaranteed minimum earnings, instead of passing them directly to workers.

“There were competitors who were kind of messing around with tipping being part of earnings,” he said. “We never did that. We will not do that.”

Neither GrubHub nor Uber has confirmed any of the merger talks, which were reported by many outlets including Bloomberg, The New York Times, and the Wall Street Journal. Most recently, reports said the talks hinged upon a share-ratio for the all-stock deal, which would give GrubHub investors a set number of Uber shares following the deal.

“Can we get better? Yes. But we’re building these businesses in the right way,” Khosrowshahi said, “and I think when we have a dialogue with regulators, the press will hold everyone accountable. I think that’s the power of the press, and that’s a good thing. I think people will find that we are one of the good actors and as we grow this business, we can set a standard that others can follow.”

You can listen to the full interview here.