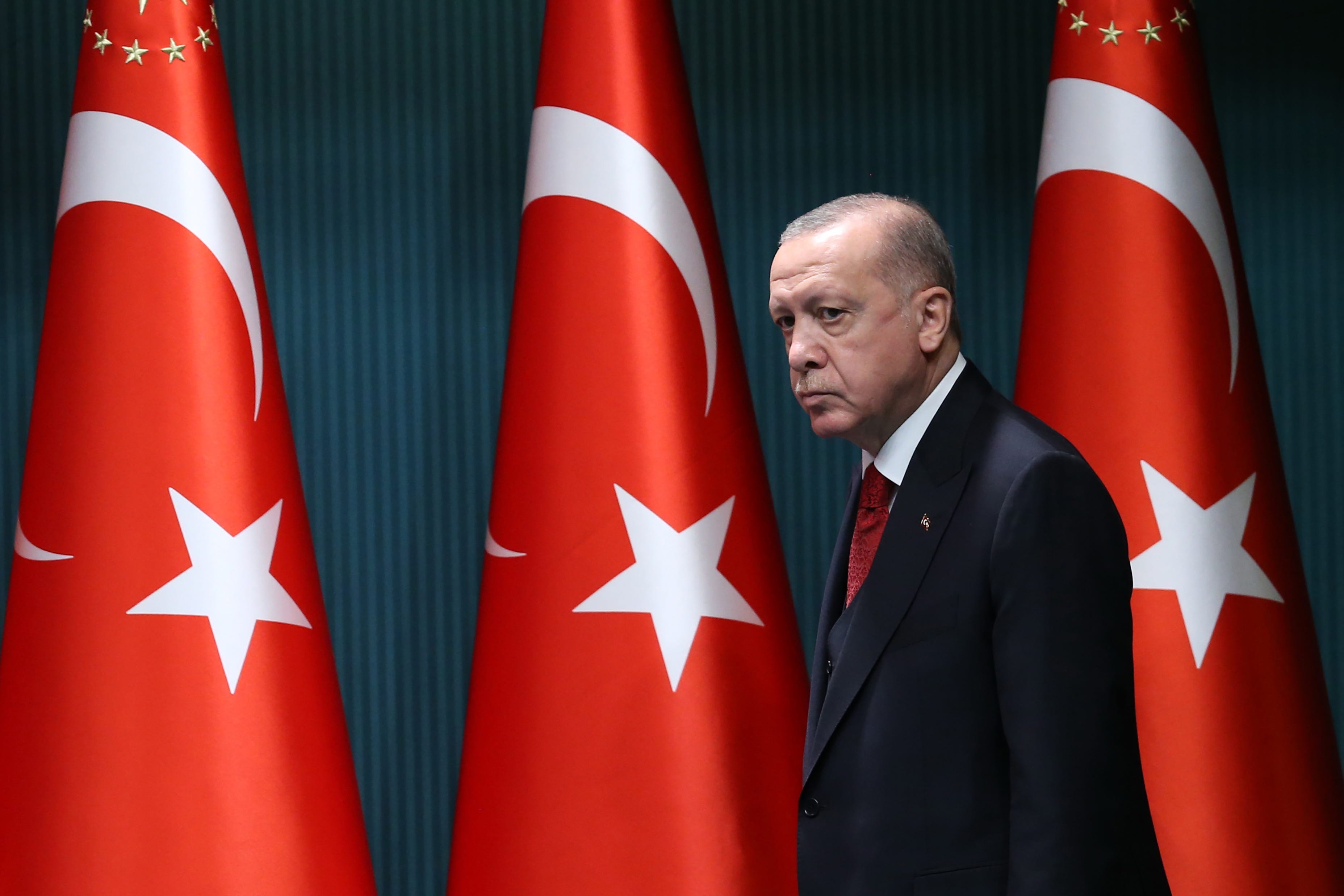 Adem Altan/Getty ImagesPresident of Turkey, Recep Tayyip Erdogan arrives to give a press conference after the cabinet meeting

The Turkish lira soared on Monday, rallying by the most against the dollar in over two years, after a political shakeout at the weekend resulted in the firing of the head of the central bank and the resignation of the treasury secretary.

“It is difficult to dismiss the notion that it was no coincidence that Albayrak decided to leave the ministry after Agbal was put in charge of the central bank. Agbal reportedly criticised Albayrak’s economic policies and his alleged preference to defend the lira with FX interventions” Piotr Matys, senior emerging-market strategist at Rabobank, said.

The lira was last up 4.3% against the dollar, marking its biggest one-day gain since late August 2018, at 8.113 lira, its strongest since the end of October.

Meanwhile, Turkish five-year credit default swaps – a form of insurance against potential sovereign debt default – fell to their lowest in over three and a half months, reflecting the improvement in investor confidence towards Turkish assets.

In the last three years, Turkish CDS have risen to as high as 517 basis points, from around 160 basis points, as investors have increasingly lost confidence in the ability of the central bank to manage monetary policy and the currency effectively. US five-year CDS, by comparison, are around 8 basis points.


A team of Wells Fargo investment strategists who studied the latest election results shares how exactly to play the most likely outcome with stocks, bonds, commodities, and tax strategies

In his time as head of the central bank, Uysal employed a combination of rate hikes and “backdoor tightening” of interest rates, which proved useless in preventing the collapse of the currency.

The lira is, by far, the worst-performing currency against the dollar this year, having lost nearly 40% in value. The lira has halved in value against the dollar in the last three years, marking a bigger loss than any other major currency in that time.

Rabobank said the unusual turn of events could mark a shift towards more orthodox monetary policies, which would support the lira and give it some much-needed respite.

“That said, we and other market watchers have given Turkey the benefit of the doubt on so many previous occasions that this time it would perhaps be prudent to wait and see concrete steps before making strong conclusions whether Governor Agbal, in close cooperation with the Erdogan administration, will be able to restore the shattered confidence in the lira,” Rabobank’s Matys said.

Following Uysal’s sacking, there will be a lot of focus on what Agbal can actually achieve, ADM Investor Services chief global economist Marc Ostwald said.

“The facts are that the weakness in the lira has been, and is, above all about political pressure on the TCMB (the Turkish central bank), and the fact that Turkey’s short-term external debt exceeds its FX reserves by a factor of three,” he said.