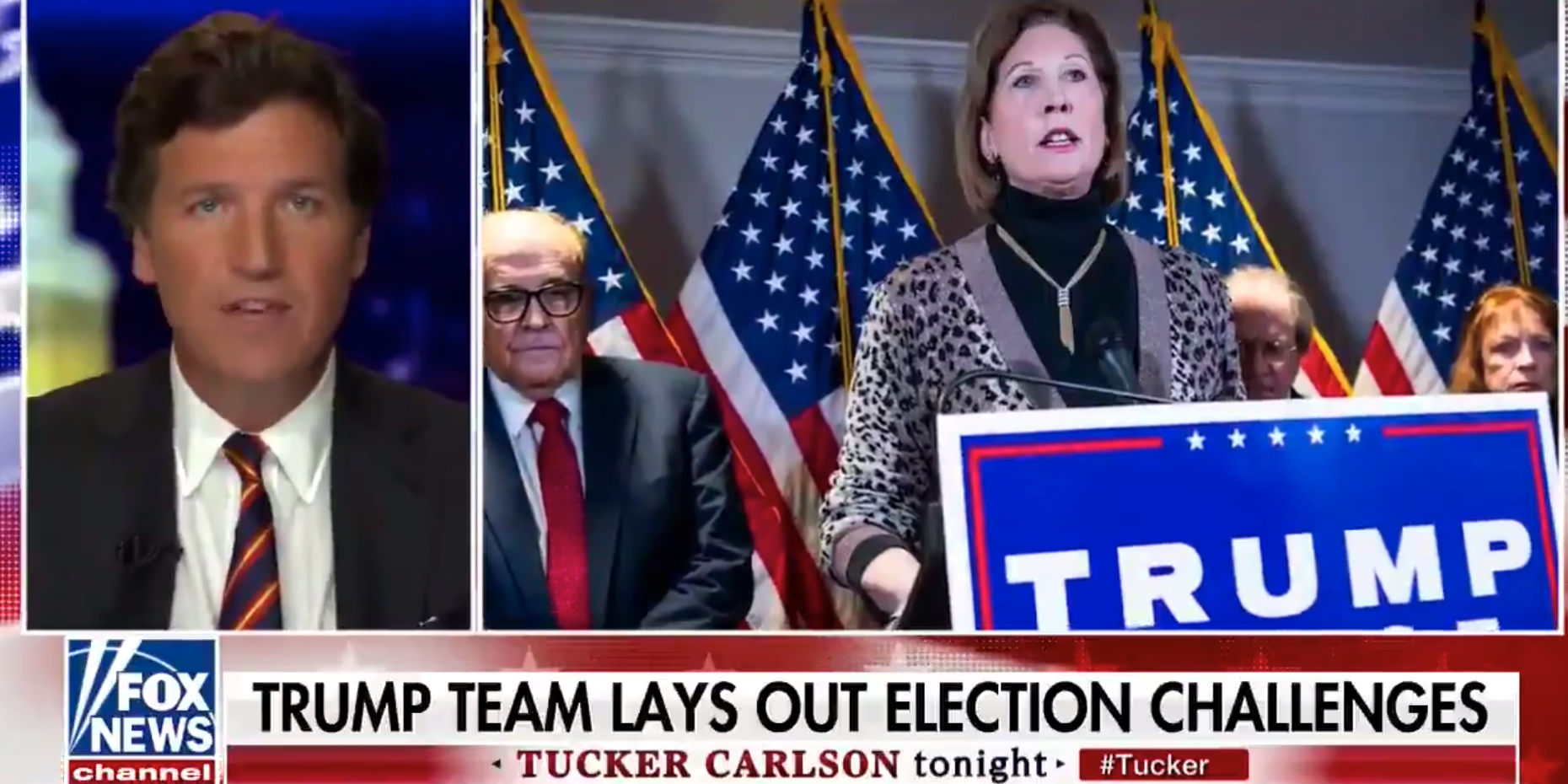 The Fox News prime-time host Tucker Carlson on Thursday lashed out at a lawyer on President Donald Trump’s election legal team for refusing to provide any evidence of Trump’s baseless claim that he won the presidential election by a “landslide.”

Carlson said that when his team reached out to the attorney, Sidney Powell, she refused to provide a single piece of evidence to support her unfounded claims that electronic voting systems had turned millions of votes for Trump into votes for President-elect Joe Biden. Carlson said he was eager to have Powell on his show and would have given her “the whole hour” or “the entire week” to detail her claims.

Instead, Powell refused to send Carlson a shred of evidence and told him to stop reaching out, he said.

“She never sent us any evidence, despite a lot of requests, polite requests â€” not a page,” the Fox News host said. “When we kept pressing, she got angry and told us to stop contacting her.”

Powell is a longtime promoter of the pro-Trump QAnon conspiracy theory, which falsely holds that the president is fighting a deep-state cabal of Satan-worshiping, child-sex-trafficking Democrats.

Carlson said Powell’s claims of a vast conspiracy to commit voter fraud would be “the single greatest crime in American history” and that he needed to see some evidence of her claims in order to promote them.

“We simply wanted to see the details,” he said. “How could you not want to see them?”

He said his show never shied away from conspiracy theories â€” “we literally do UFO segments,” he said â€” but that the Trump team’s claims were a bridge too far, even for him.

After Carlson’s Thursday night segment, Powell told the Washington Examiner that she “would continue to encourage him and all journalists to review all the materials we have provided so far and conduct their own investigations.”

The GOP is promoting Trump’s false claims and his effort to undermine the legitimacy of the election. The Republican National Committee shared a video on its Twitter account of Powell delivering the baseless allegations of voter fraud on Thursday.

There is no evidence to support the president and his allies’ claims of widespread voter fraud.

Trump’s own administration has rejected these claims. The Department of Homeland Security called this year’s election “the most secure in American history.” And the Election Infrastructure Sector Coordinating Executive Committee said in a recent statement, “There is no evidence that any voting system deleted or lost votes, changed votes, or was in any way compromised.”

Carlson has previously said “fraud took place” in the election but that it wasn’t enough to change the outcome of the presidential race.

“At this stage, the fraud that we can confirm does not seem to be enough to alter the election result,” Carlson told his viewers on November 10. “We should be honest and tell you that. Of course, that could change.”

The prime-time host â€” one of the most watched on cable TV â€” has repeatedly railed against other media outlets, falsely saying that no news organisations are investigating claims of voter fraud.

“Gathering facts is the last thing our media â€” our designated fact gatherers â€” seem to want to do. Instead, they’re demanding that you shut up and accept Joe Biden,” he said. “And if you don’t accept it, they will hurt you.”