I made mashed potatoes using 3 celebrity chefs' recipes, and all of them had issues 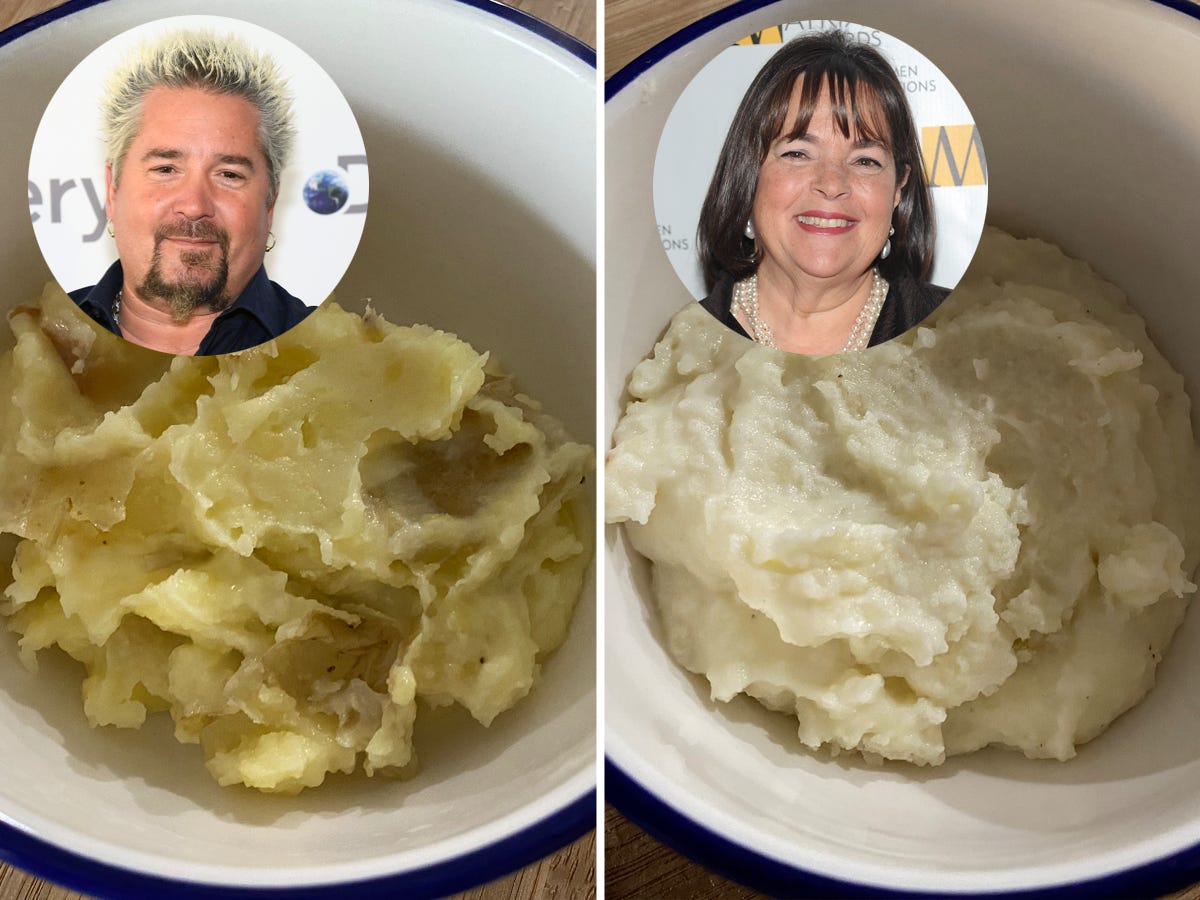 Mashed potatoes are a fan-favorite, especially around the holidays, and everyone has their own spin on the classic side – including celebrity chefs.

I decided to test recipes by Guy Fieri, Ina Garten, and Alton Brown to find which mashed potatoes have the best taste and texture.

Fieri spices things up with wasabi 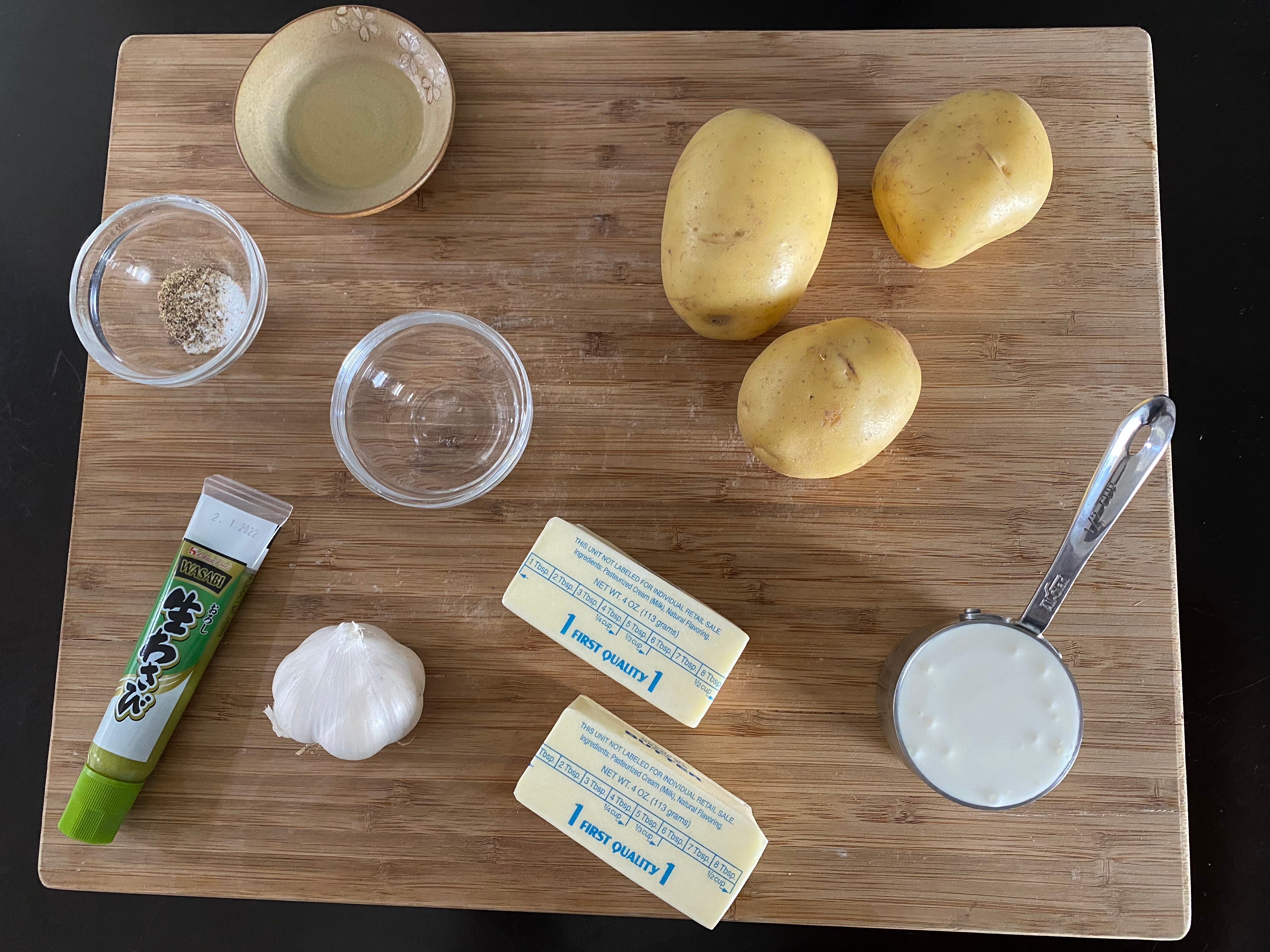 I was a little concerned by the Mayor of Flavortown’s decision to add wasabi to his mashed potatoes, but the rest of his ingredients were fairly straightforward: a head of roasted garlic, butter, heavy cream, and waxy, unpeeled potatoes.

Leaving the skin on for mashed potatoes can be divisive, but I actually don’t mind the taste or texture at all.

After roasting the garlic for 45 minutes, this recipe was quick and easy 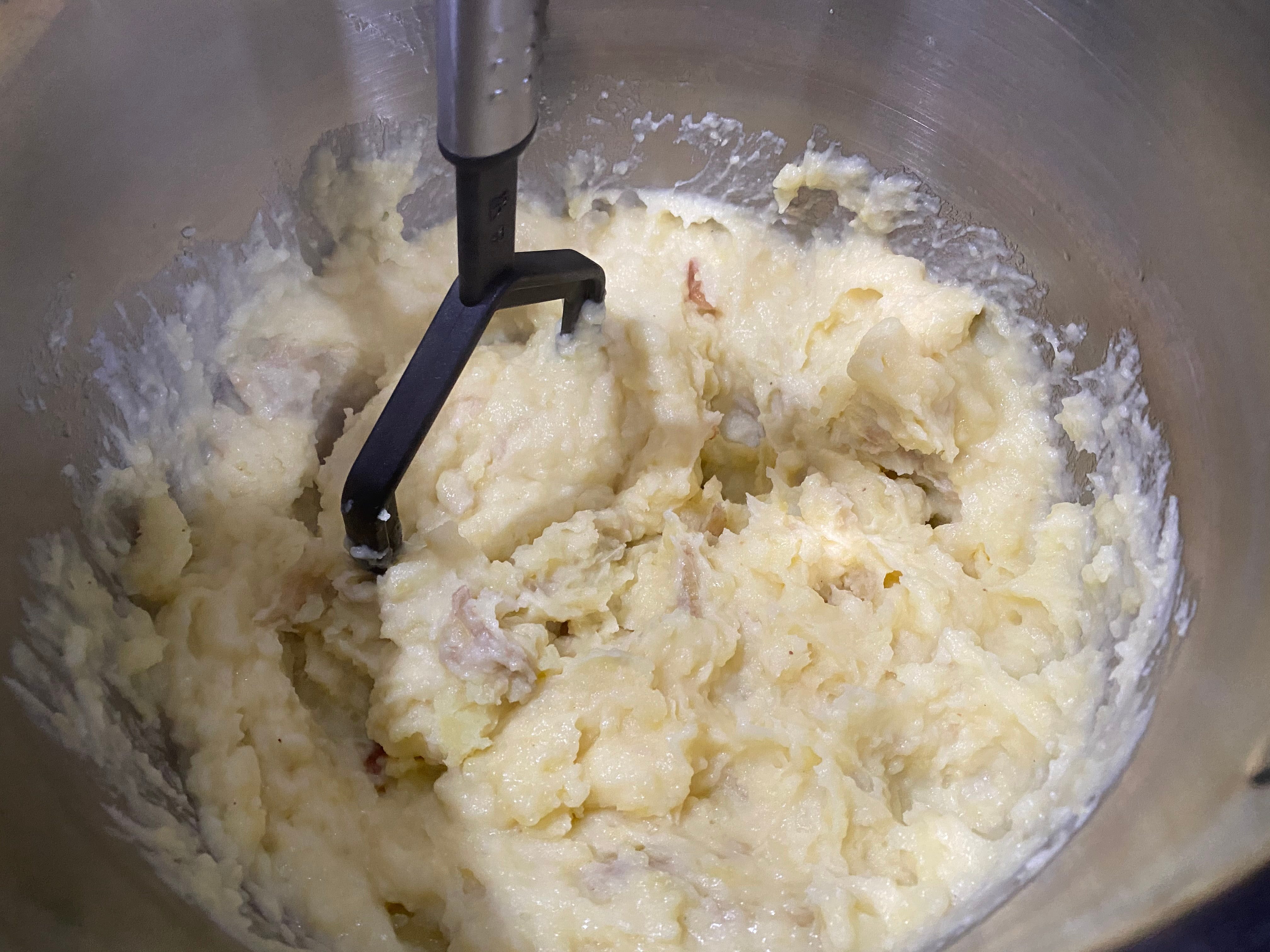 Paige Bennett for InsiderCooking the garlic was the most time-intensive part of the process.

The first step in this recipe was to roast a head of garlic for 45 minutes. I went ahead and started my potatoes on the stove about 10 minutes after putting the garlic in the oven, and everything ended up finishing at the same time.

As for the wasabi, the recipe called for a powdered variety, and then Fieri makes a paste by mixing the powder with water. My local grocery store didn’t have wasabi powder in stock, but I found wasabi paste.

Overall, this recipe was incredibly simple. Once the potatoes and garlic were done, I added the wasabi, butter, cream, garlic, salt, and pepper and mashed away.

I couldn’t taste the wasabi, and these definitely needed more salt 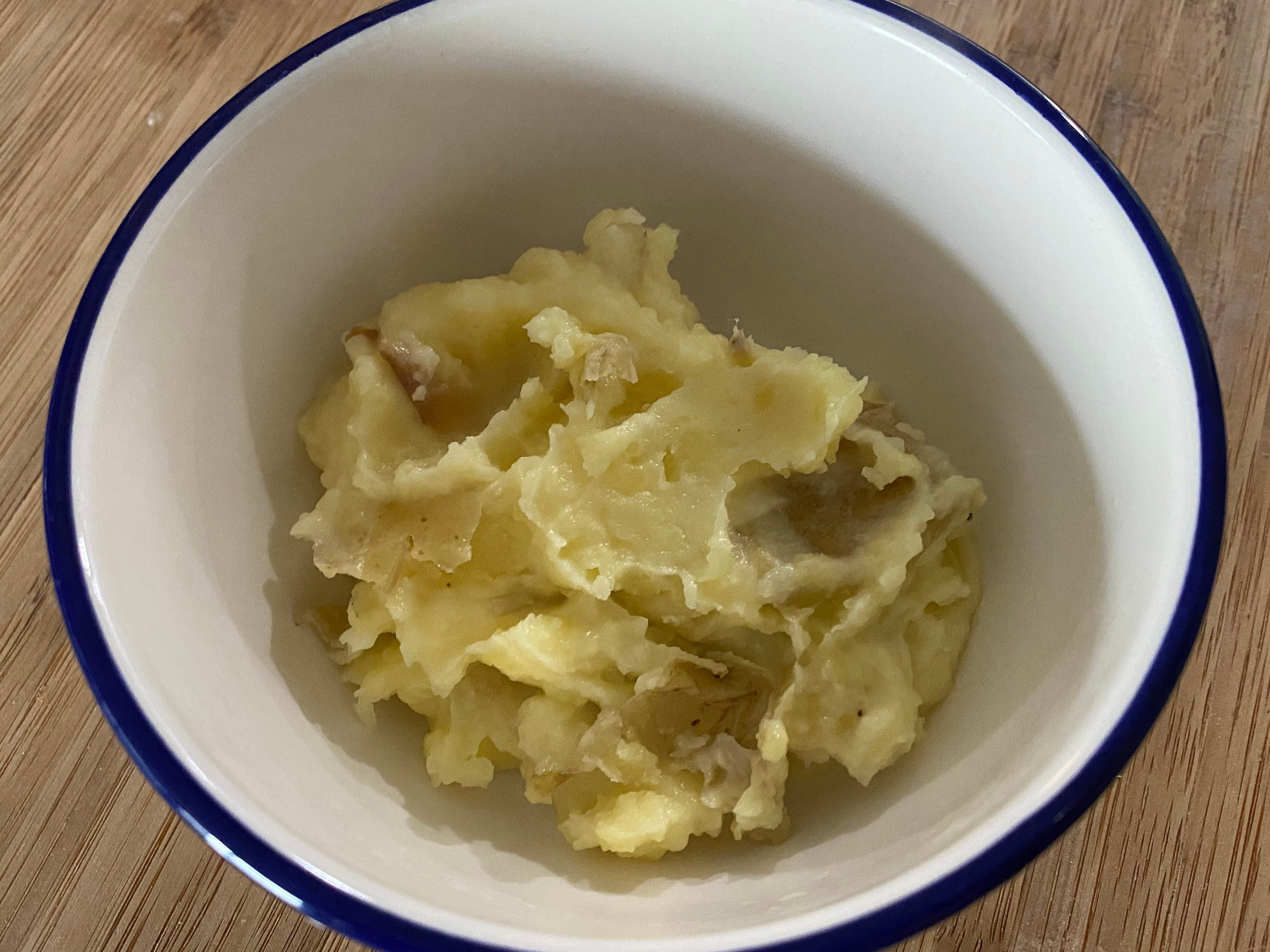 Paige Bennett for InsiderIt wasn’t the most flavorful result.

The recipe didn’t specifically say to salt the water for the potatoes, so I didn’t, but this mash definitely needed salt. Without it, the potatoes turned out somewhat bland, even after seasoning them at the end.

I went easy on the wasabi (reduced it to half a teaspoon) to avoid making the potatoes too spicy, but I probably could’ve added a full teaspoon or two. I actually couldn’t taste the wasabi at all.

As far as texture goes, I thought the potatoes were slightly greasy from the full cup of butter. 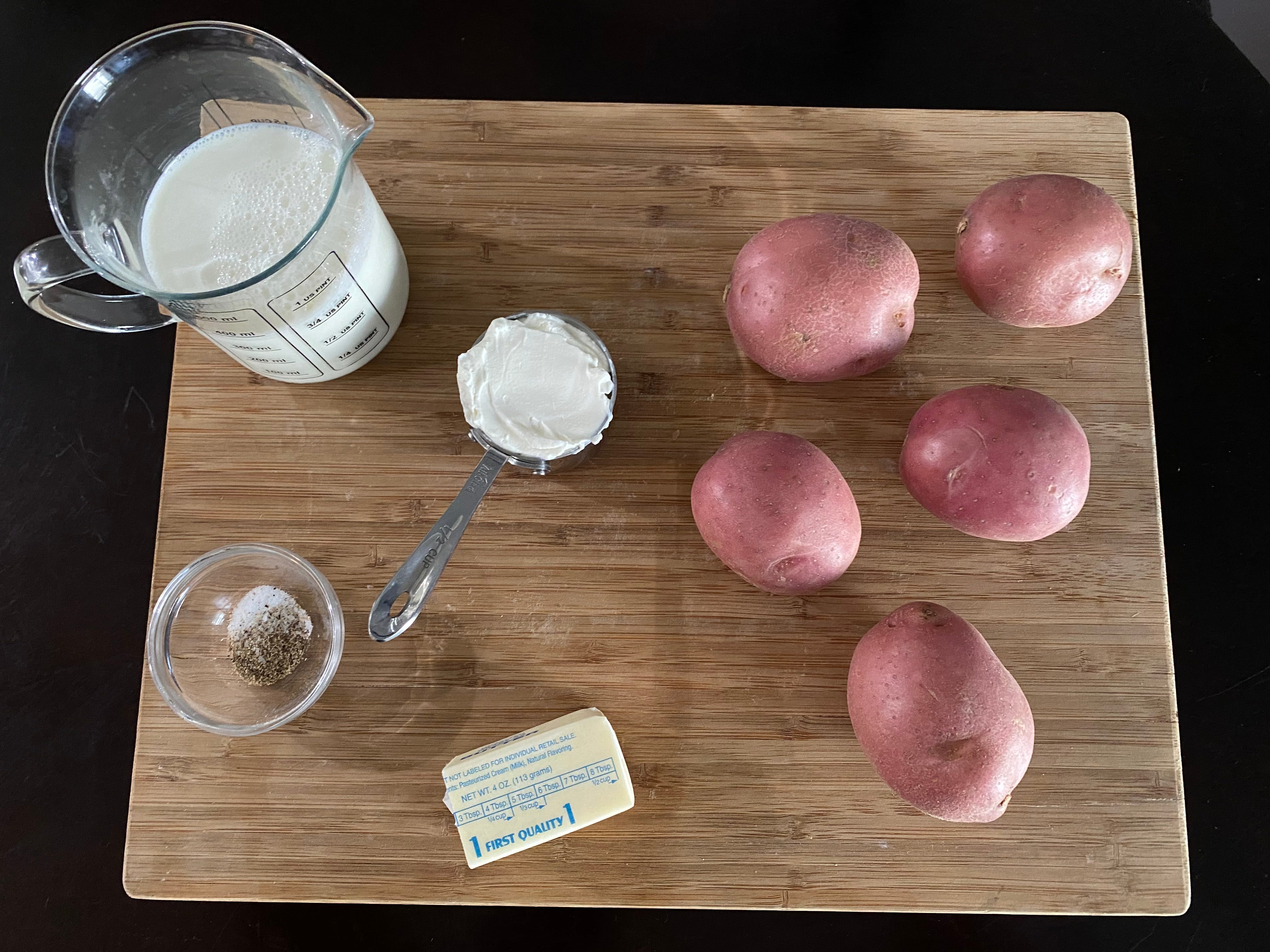 Garten’s recipe was a very traditional take on mashed potatoes, with the addition of sour cream for some tang and extra creaminess.

It took some time to put the potatoes through the ricer 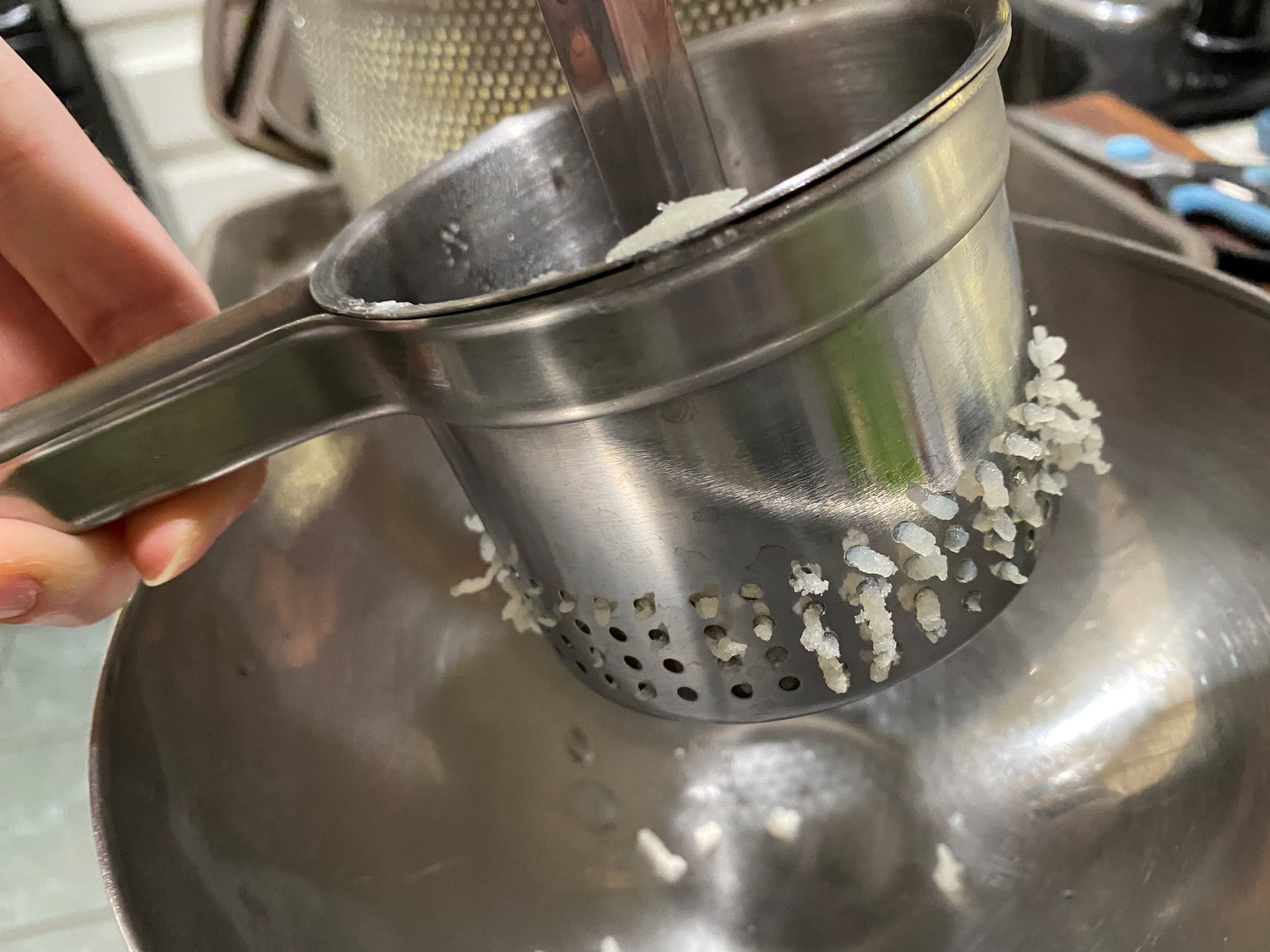 Paige Bennett for InsiderI used a ricer instead of a food mill.

There were a few more steps to this recipe than the others. First, I needed to peel, chop, and boil all of the potatoes. Then, while the potatoes boiled, I warmed the milk and butter on the stovetop.

Garten also suggested using a food mill on the potatoes rather than mashing them. I didn’t have a food mill, but I did have a ricer that I typically use when making mashed potatoes. 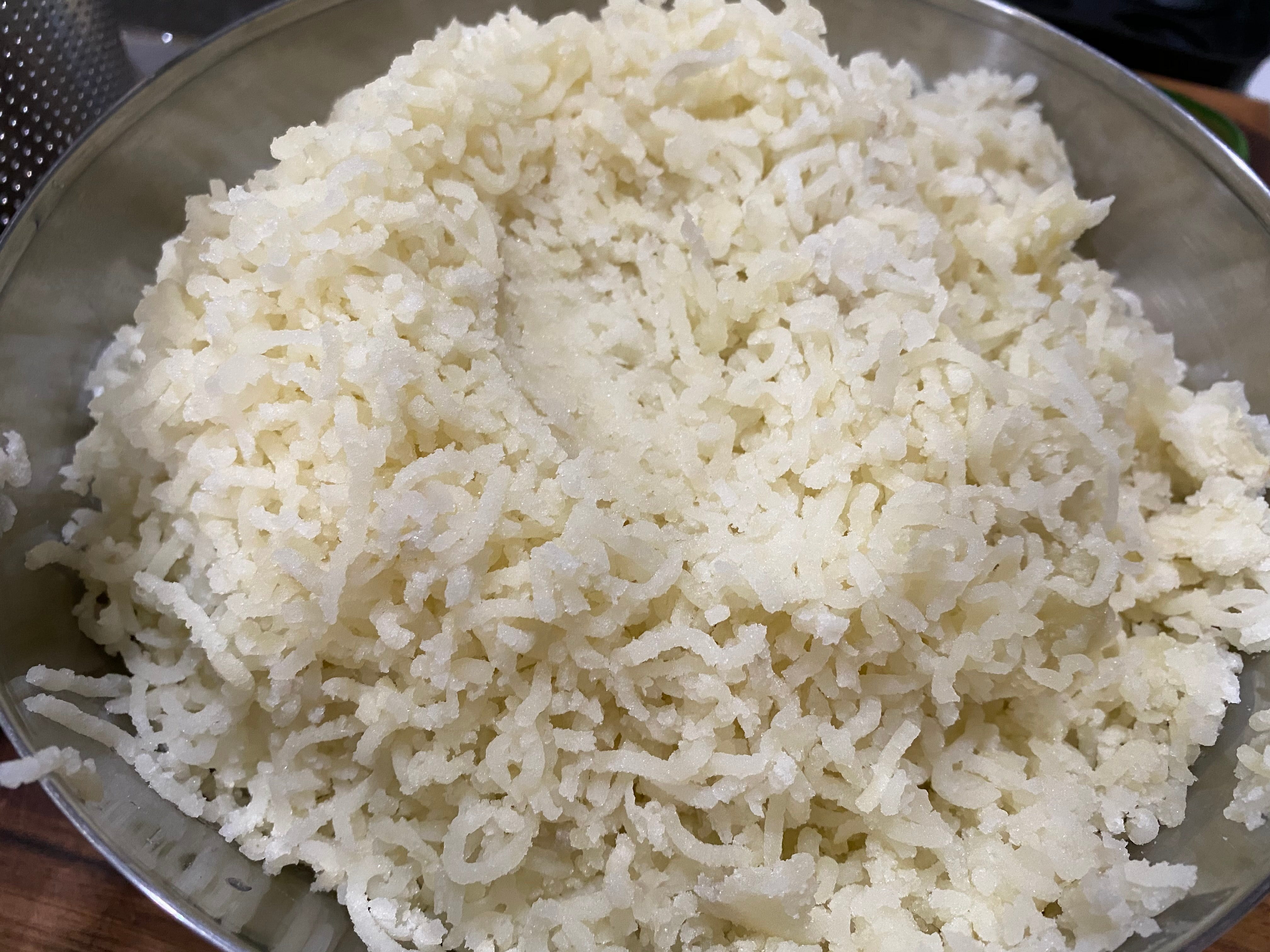 Paige Bennett for InsiderRicing all the potatoes took a long time.

Because this recipe had so many potatoes, it took some time to put them all through the ricer.

Once they were all riced, I poured in the warm milk and butter (a great tip for keeping the potatoes hot) and mixed in the sour cream, which immediately made them look creamier.

The flavor was delicious, but the texture was slightly off 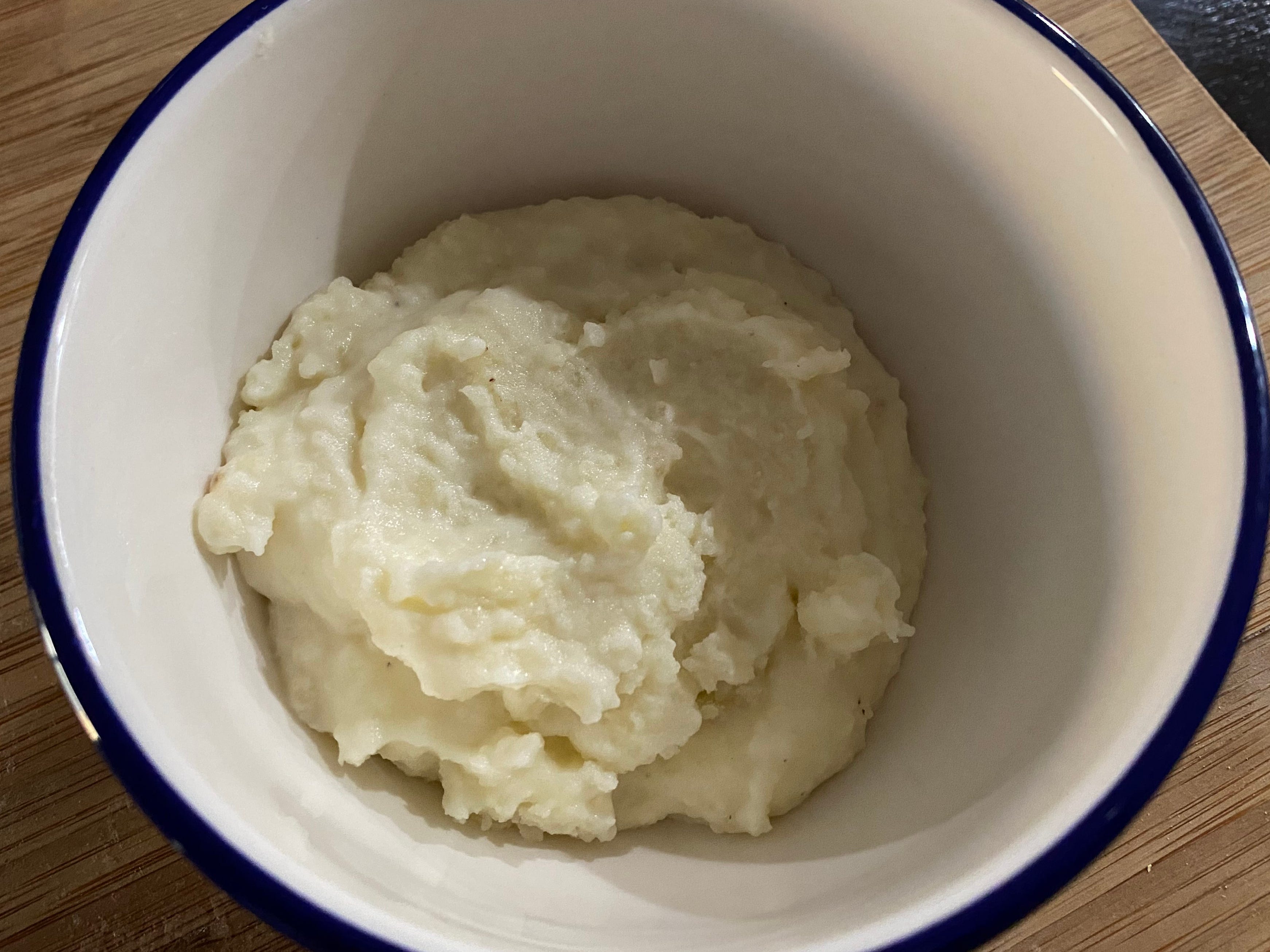 Despite boiling the potatoes for about 15 minutes longer than the recipe called for, they were slightly underdone, which gave the final product a bit of a grainy texture. I probably just needed to cut the potatoes into smaller pieces before boiling them.

But the overall flavor was incredible. The potatoes were really buttery and savory without having a greasy mouthfeel.

I was shocked to see no butter in Brown’s recipe 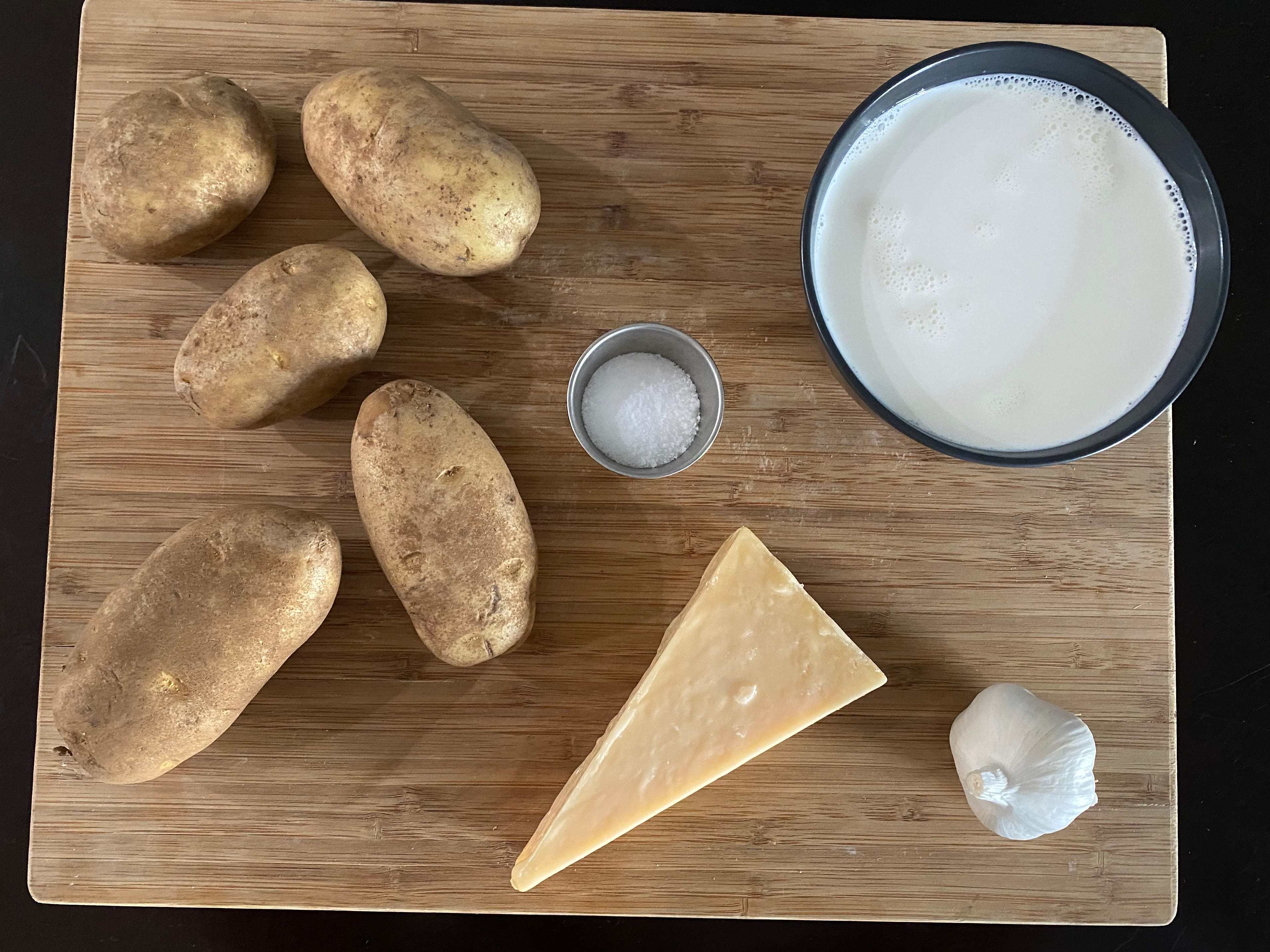 Paige Bennett for InsiderAlton Brown’s recipe was the only one without butter.

The good news about this recipe is that it has a short list of ingredients. But the first thing I noticed is that there’s no butter.

What are mashed potatoes without butter? I hoped the 170.10g of Parmesan cheese would make the lack of butter forgivable.

These potatoes were the easiest to make 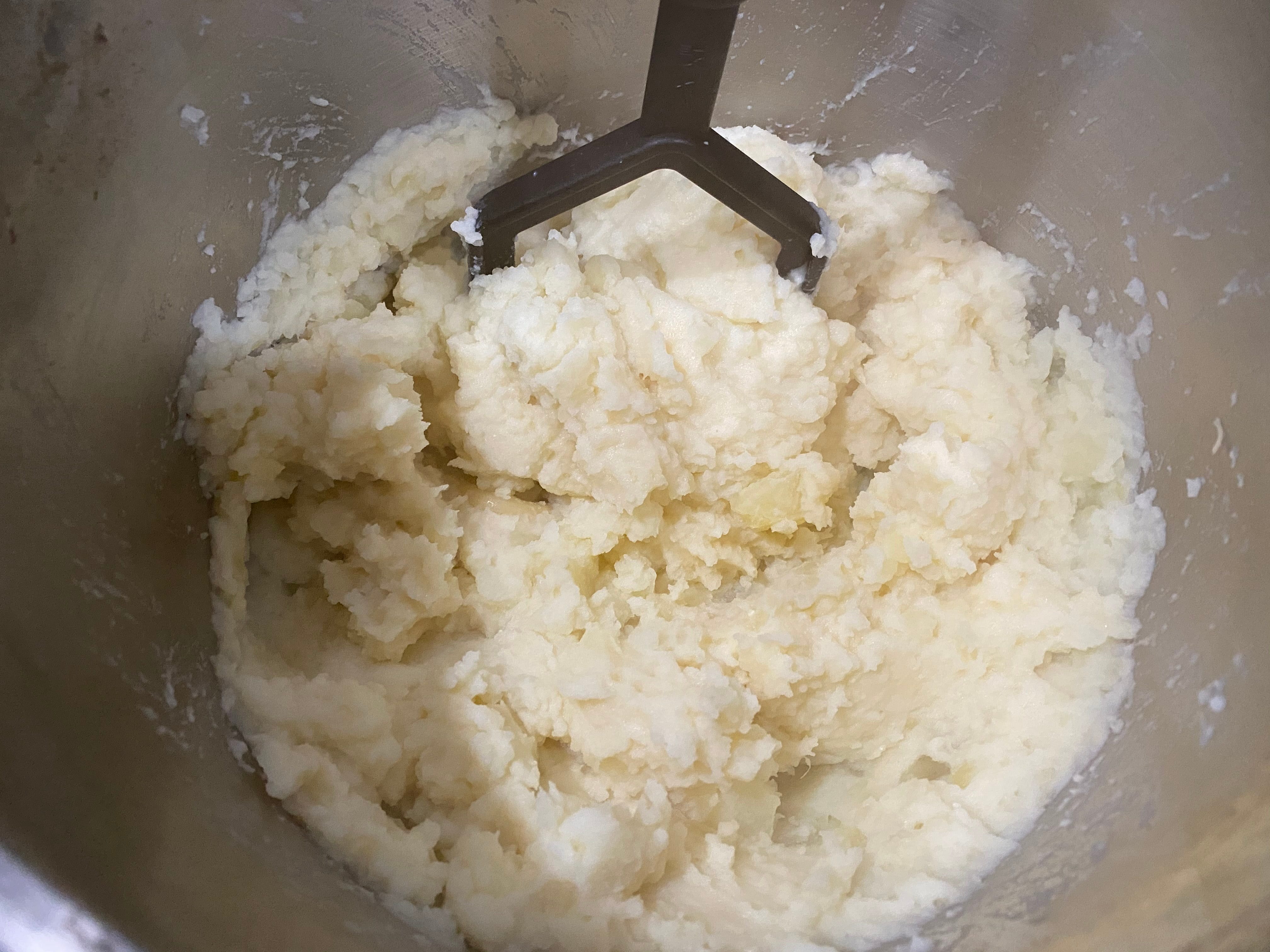 Brown’s recipe was simple from start to finish.

I peeled and chopped the russet potatoes, covered them in salted water, and brought the water to a boil. While that was going, I heated half-and-half and crushed garlic cloves in a pan and set it aside.

After draining the potatoes, I added in the half-and-half and garlic, mashed everything together, and folded all the cheese in.

I was not surprised to find that these potatoes needed butter 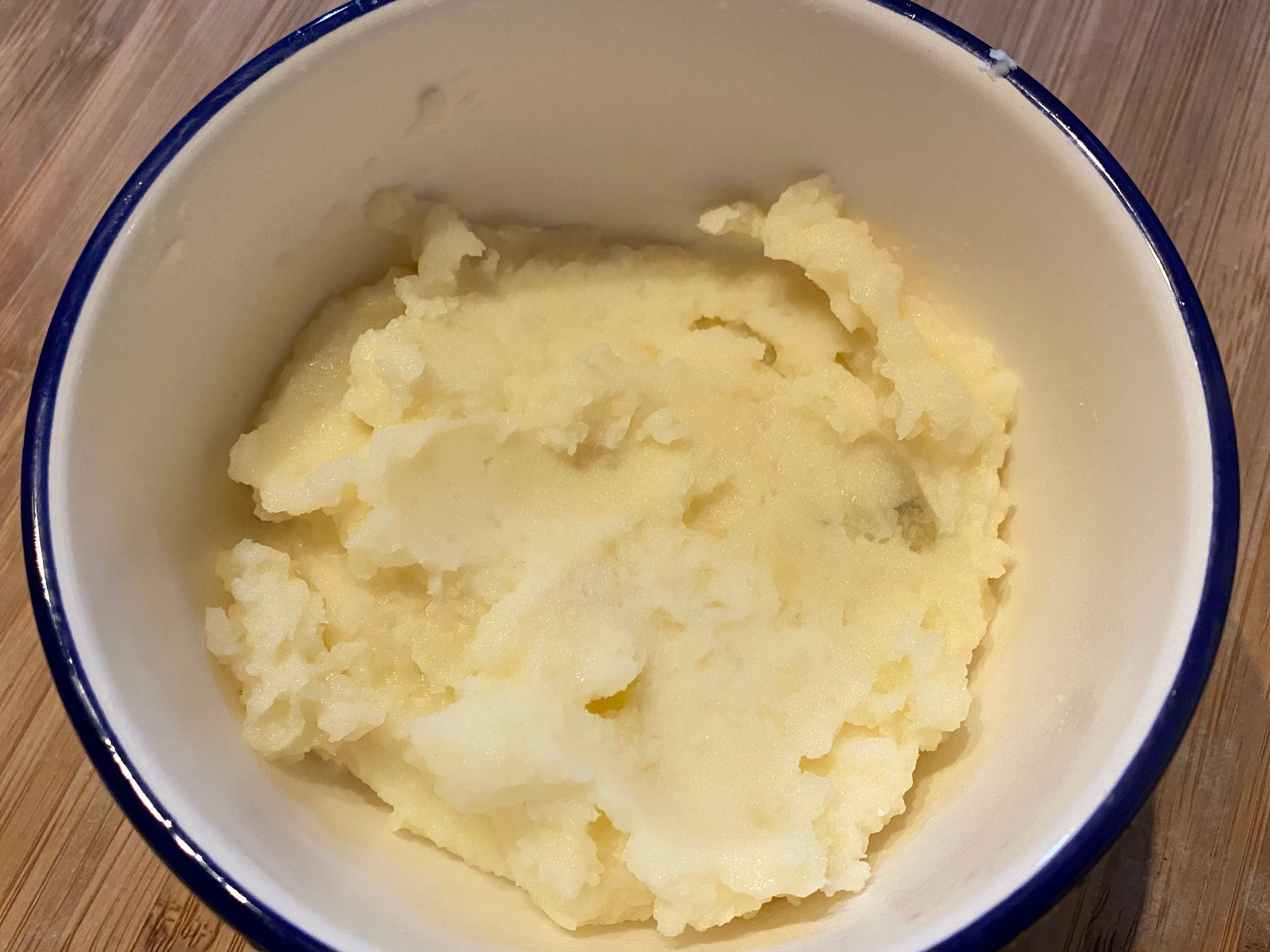 Paige Bennett for InsiderThey ended up being a little dry.

Something was missing here, and that something was butter. Although there was cream, these potatoes were on the drier side.

The Parmesan flavor was undeniably delicious, but I’d actually trade about half of the cheese for a stick of butter in this recipe. Then, I have no doubt that it would be perfect because it already had a nice creamy texture.

Had I cooked the potatoes longer, Garten’s recipe would be my favorite 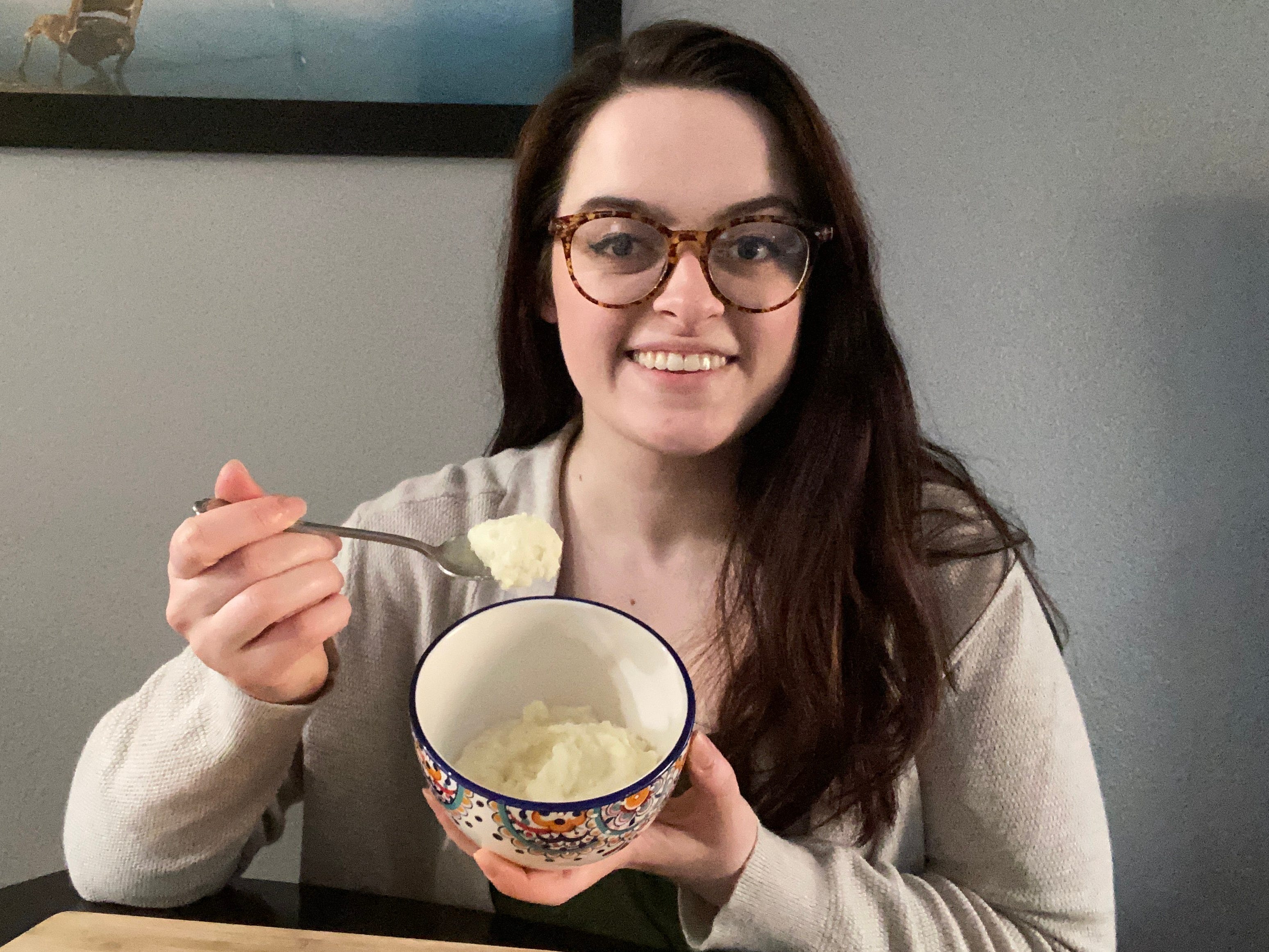 Paige Bennett for InsiderIna Garten’s recipe was the best of the bunch.

It was hard to choose my top pick here because they each had great elements.

I’d simply add more salt at the start of the cooking process for Fieri’s potatoes – and a little less butter at the end to alleviate the greasy texture. And for Brown’s potatoes, I’d swap some of the cheese for a nice helping of butter.

I loved the flavor of Garten’s potatoes as is. The only issue was the texture, and that was more on me for not cutting the potatoes into small enough pieces.

When it comes down to it, I’d make all of these recipes again with my tweaks.

Click to check out the other celebrity-chef recipes we’ve put head-to-head so far.