I tried Costco's famous bacon that's less than $4 per pound, and I get why it has so many fans 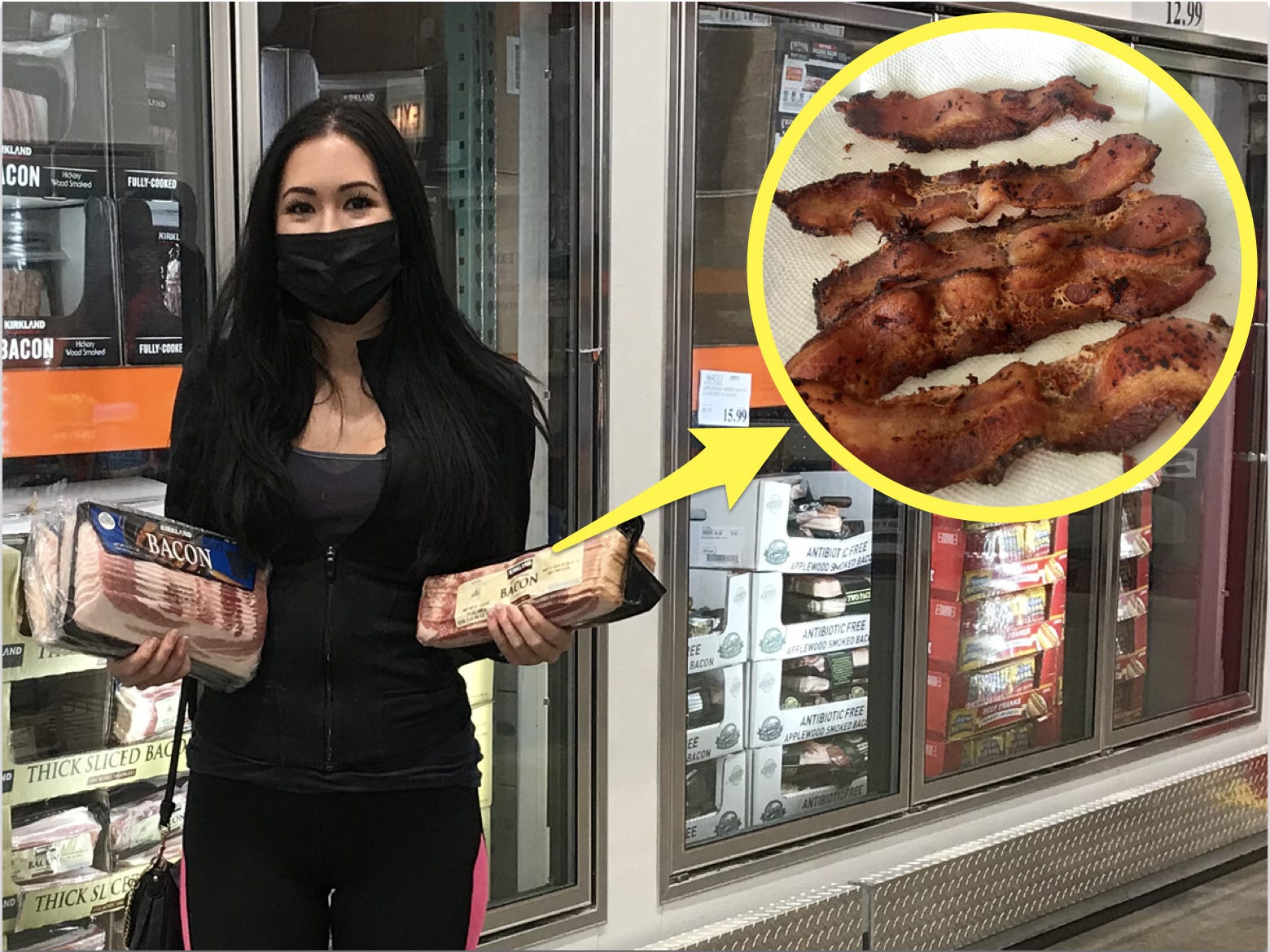 Lara Walsh for InsiderCostco’s bacon is a fan favorite.

Some things don’t need to be bought in bulk, but Costco’s Kirkland Signature bacon isn’t one of them.

The bacon, according to the Wall Street Journal, is about 20% cheaper than comparable brands. And people have taken notice of this deal, seeing as the wholesale store has reportedly seen a higher demand for the product amid the coronavirus pandemic.

When I saw an article from Consumer Reports that called Kirkland Signature bacon “the only excellent product” when measured up against competitors like Oscar Mayer, Trader Joe’s, and Niman Ranch, it piqued my interest.

But I also saw some recent customer reviews stating that Costco was pulling a “bait and switch” by hiding fattier, smaller pieces of bacon under meatier slices in the packaging.

With all this in mind, I decided to try both varieties of the bacon, regular and thick-sliced, to see if they lived up to the hype or left me wanting more.

Read on to see how it went.

This bacon is in high demand, so I was happy to find it in stock 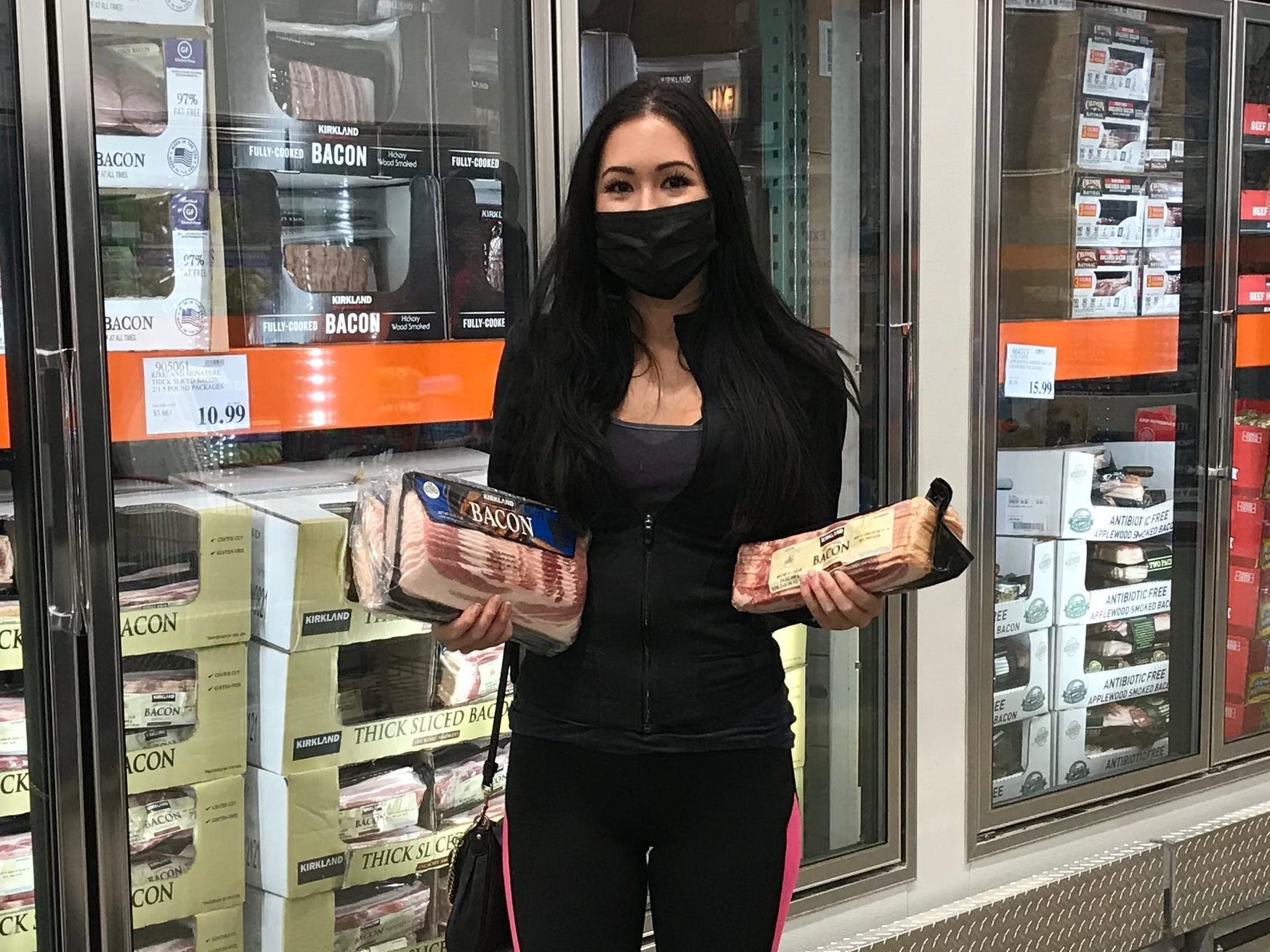 Lara Walsh for InsiderI picked up regular and thick-sliced bacon from Costco.

Luckily, I was able to pick up a package of the regular bacon, which comes with four 0kg bags, for $13.49 (or $3.37 a pound). I checked the package to make sure I hadn’t gotten one with a lot of visible fatty, thin, or broken pieces.

I also picked up a package of the Kirkland Signature thick-sliced bacon, which cost $10.99 for three pounds (or $3.66 a pound).

Once I had the products, I was ready to take them home and cook them both in a frying pan and in the oven to compare. 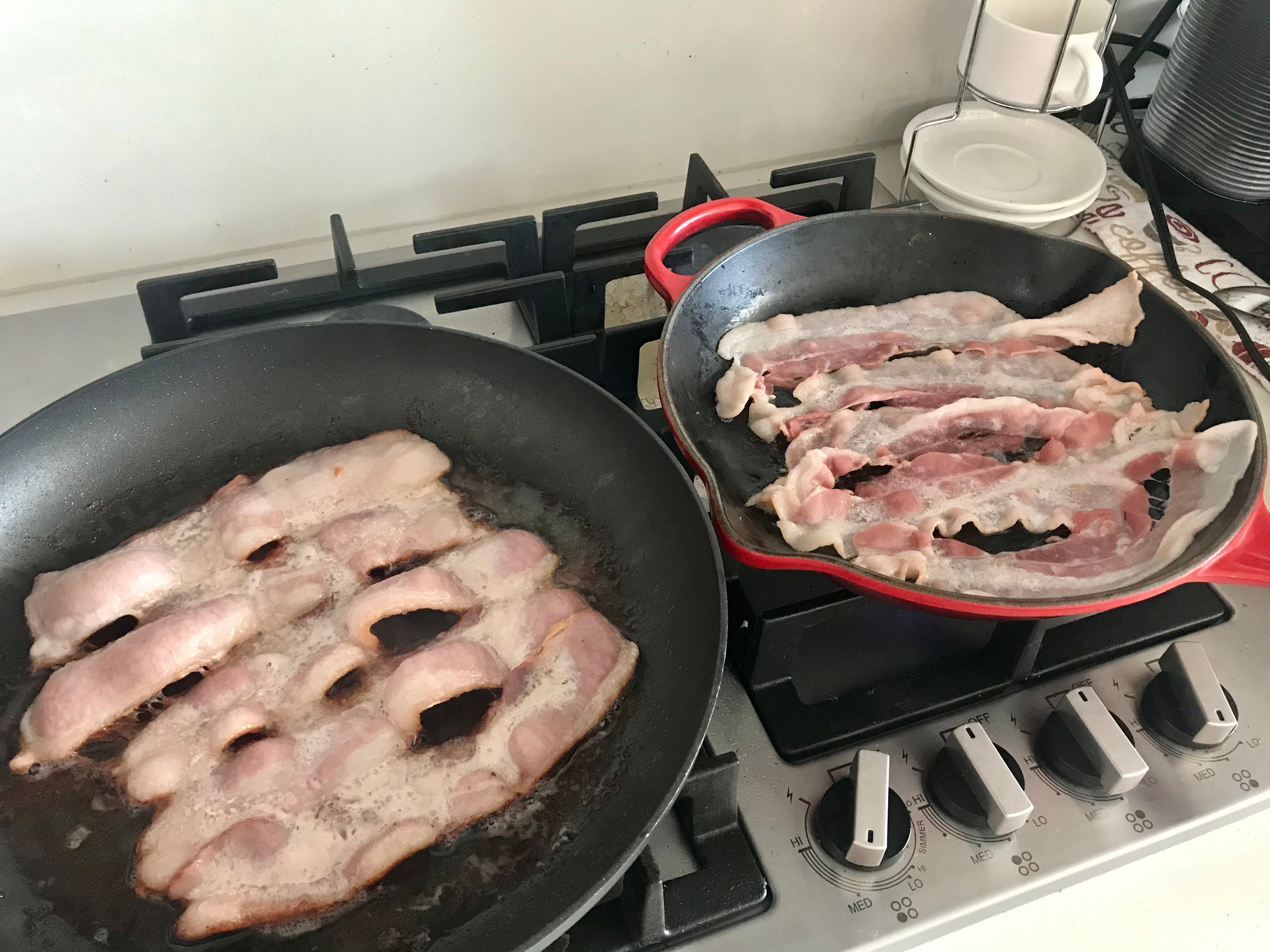 Lara Walsh for InsiderI cooked the bacon in a skillet and in the oven to compare.

I’ve generally noticed that, throughout the pandemic, the bacon I’ve been picking up from the grocery store has been a little fattier than usual. So I kept that in mind as I inspected the Costco package.

I placed my strips of regular bacon in a cold cast-iron skillet, turned up the heat to medium, and flipped them occasionally until they were done.

In general, I noticed that it was kind of difficult to make sure the bacon cooked evenly.

Unsurprisingly, some of the pieces shrank a lot in the pan, and because of the varying fat content, they got a little burnt. But I like my bacon more on the “done” side, so this was kind of a blessing in disguise for me. 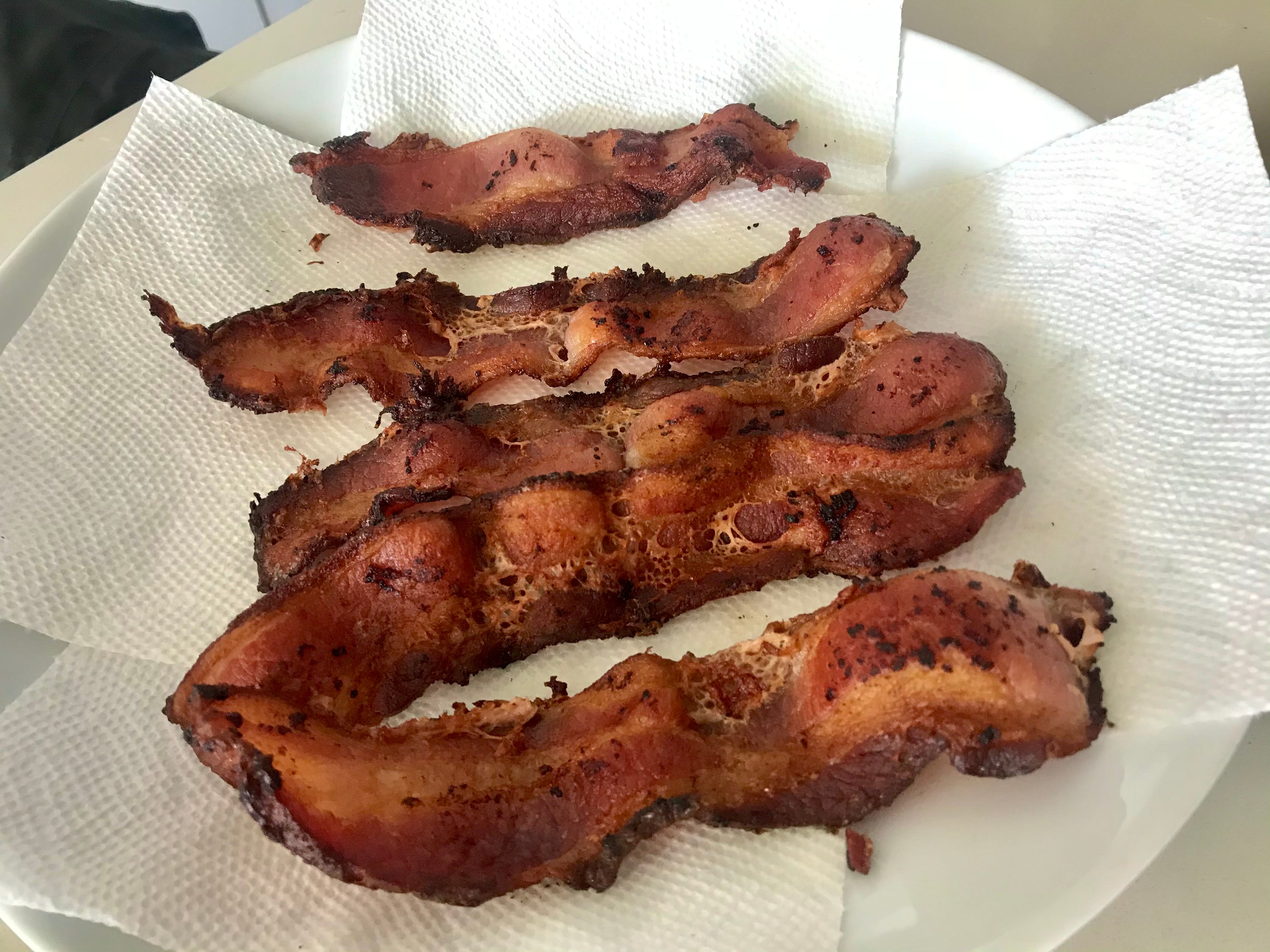 Cooking the regular bacon in the oven was significantly easier than frying. I popped the strips in for 20 minutes at 375 degrees Fahrenheit, flipping them halfway through.

Not only was there slightly less shrinkage – making the bacon appear meatier – but I think the pieces also cooked more evenly.

Flavor-wise, I didn’t get the hickory-smoke taste as much as I thought I would. But the smokiness was definitely there, and the bacon was crispy and salty, making it pleasant to eat even if it wasn’t restaurant-worthy.

On the other hand, the thick-sliced bacon was comparable to more expensive brands 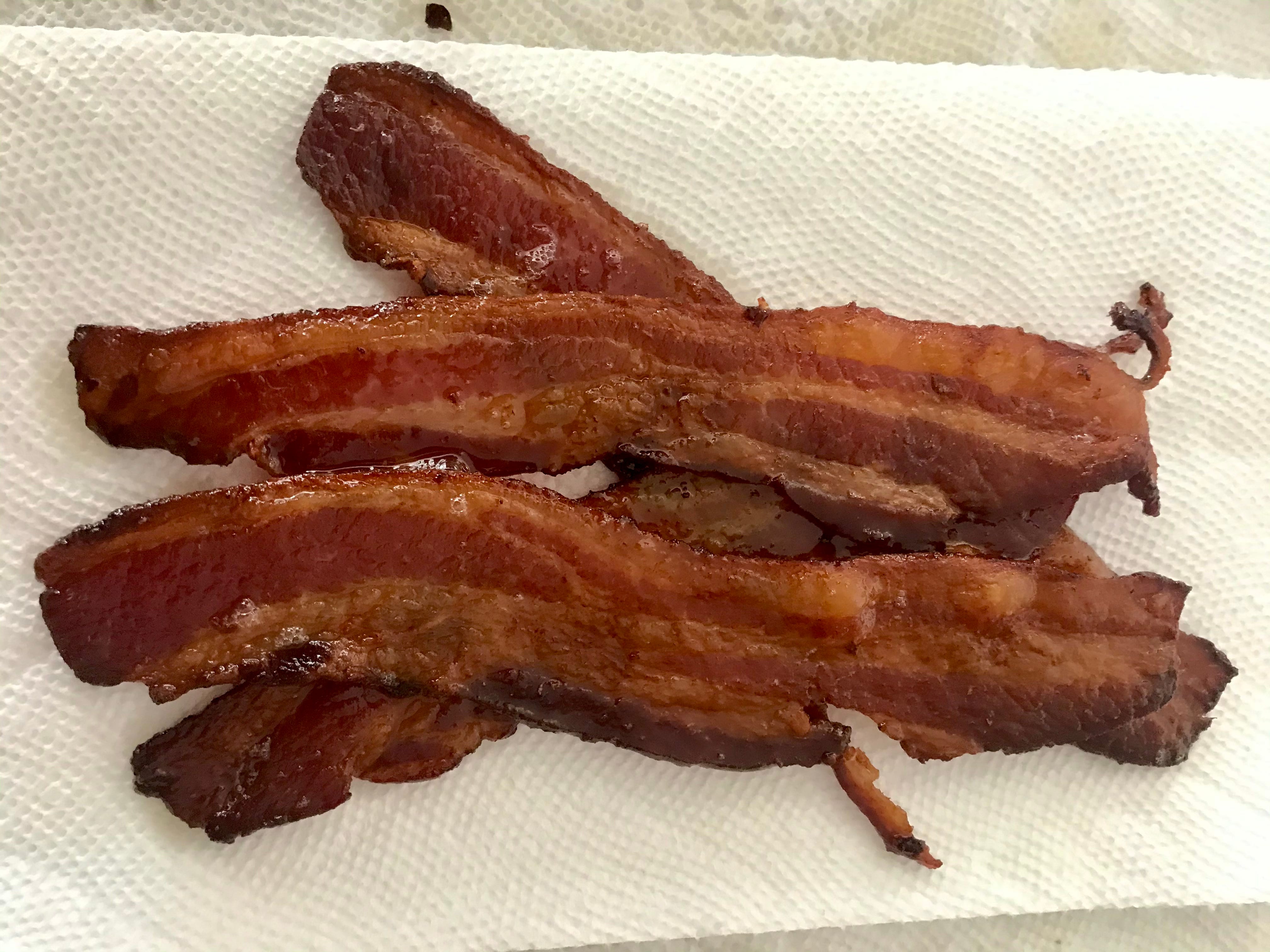 Lara Walsh for InsiderI was much more impressed with the thick-sliced strips.

I cooked the thick-sliced strips in a cold nonstick pan, turning them frequently until they were done.

I immediately noticed this bacon didn’t have as much shrinkage or fat, and it seemed to cook a lot more evenly.

The high-quality results were even more pronounced when I cooked the strips in the oven for 20 minutes at 375 degrees Fahrenheit, turning them halfway to ensure even crispiness.

The smokiness from the hickory wood was stronger with this bacon. I personally prefer the flavor of applewood-smoked bacon, but this tasted exactly as it should: salty and crispy without too much grease. 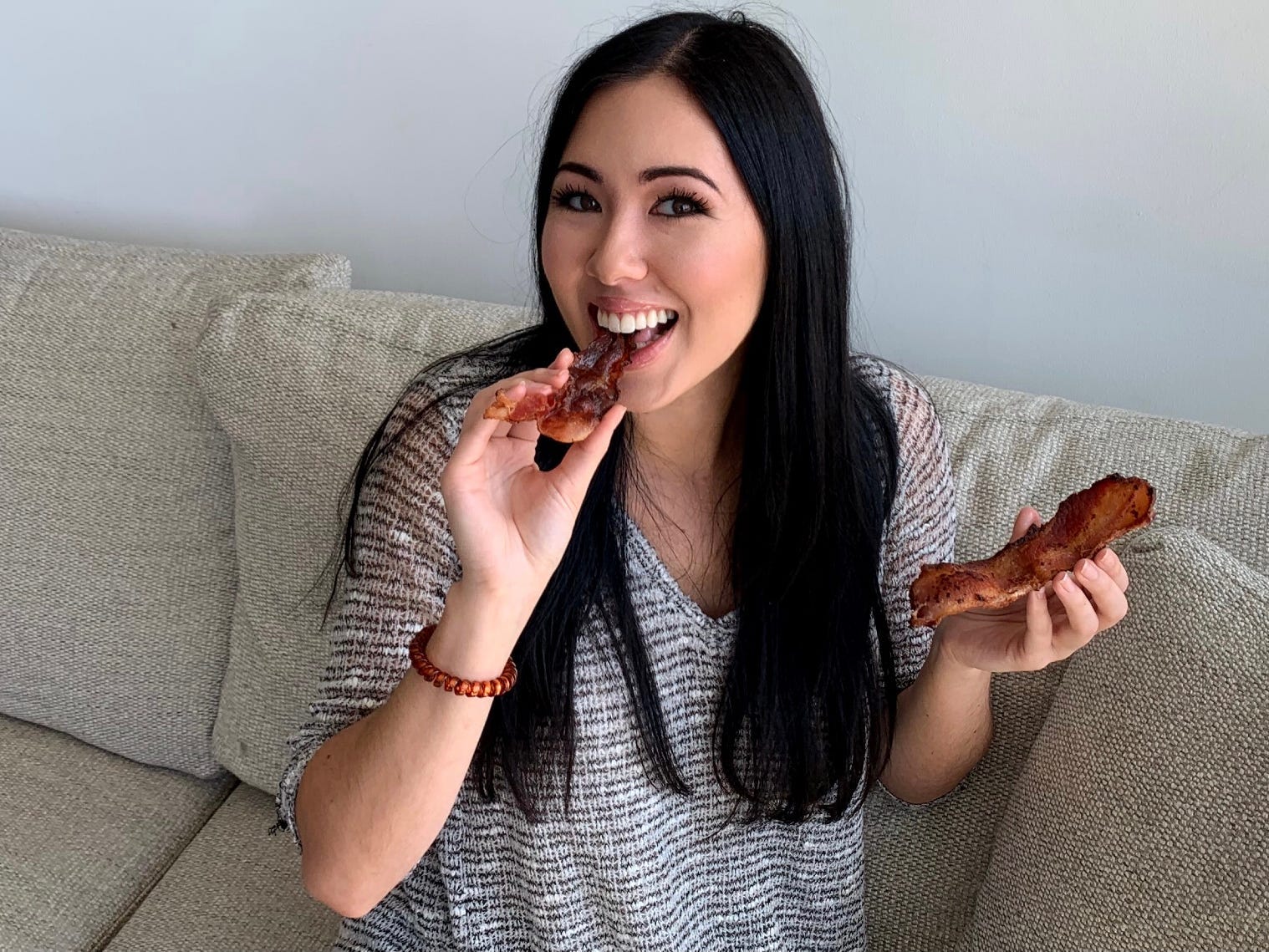 I’m generally a bigger fan of thin and crispy bacon, but this thicker, hickory-smoked option really provided good value, flavor, and texture. For the price, this really blew it out of the water.

Its thin-cut counterpart was tasty, but not something I’d call “excellent.”

Considering that it was just 30 cents more per pound than the regular bacon, I’ll be buying the thick-sliced variety every time.

Both packs were cheaper than other brands, but they definitely didn’t taste like it. I think a trip to Costco would be well worth it just to load up on the thick strips.