Trump told Americans: 'Don't be afraid of COVID.' Here's why his odds are better than almost anyone else of his age and condition. 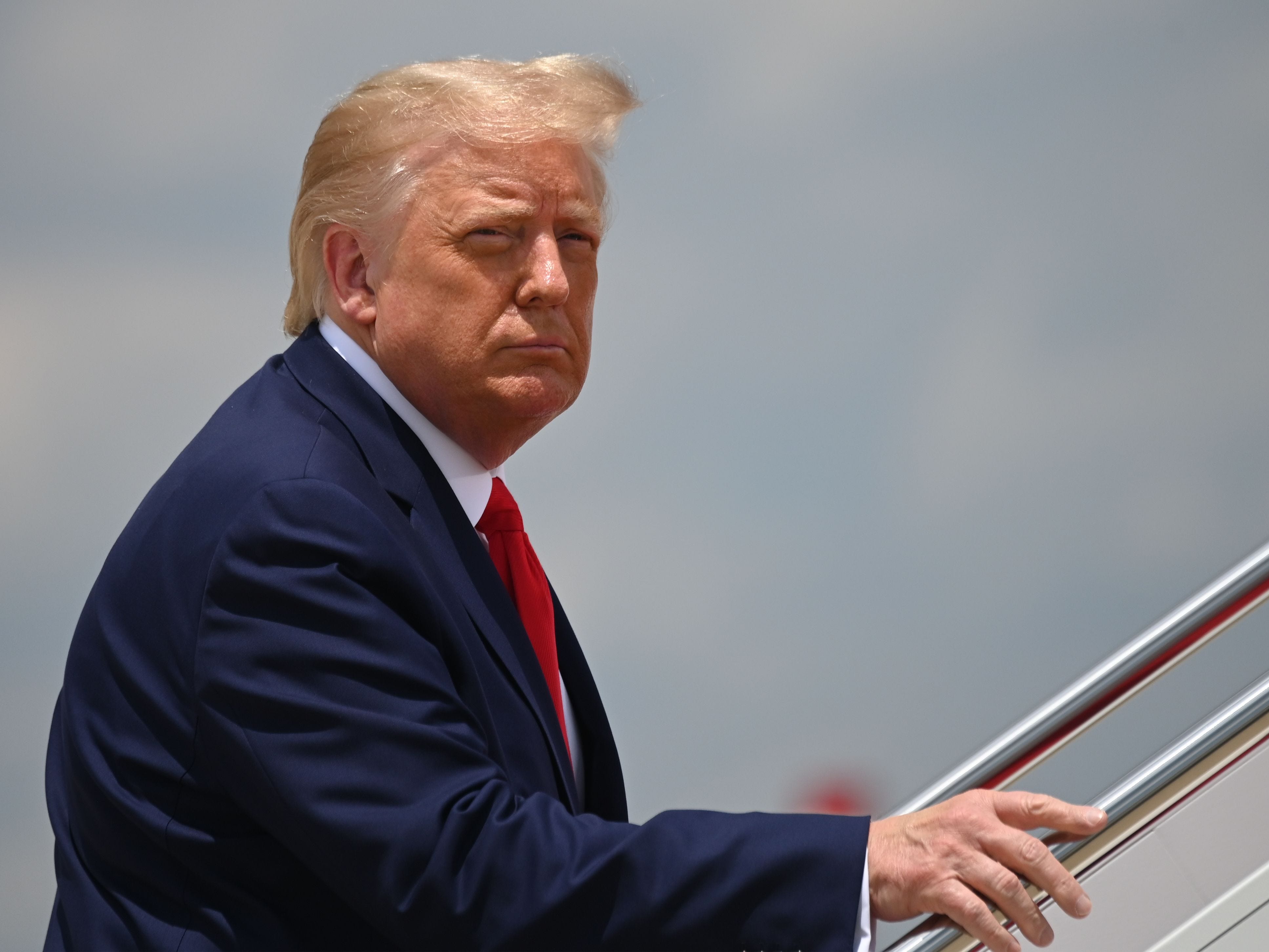 JIM WATSON/AFP via Getty ImagesUS President Donald Trump boards Air Force One at Joint Base Andrews in Maryland on July 15, 2020, as he travels to Atlanta.

President Donald Trump is in a unique position to recover from the coronavirus. His role as one of the most powerful people in the country means he’ll have access to the best possible care, and his race and wealthiness increase his odds of survival.

The president tweeted Monday afternoon, “Don’t be afraid of Covid. Don’t let it dominate your life.” For those who do not hold the highest office in the land, that’s not so simple.

Trump does face a relatively high risk of developing serious symptoms because he is over 70, clinically obese, and male. But, as a white person, he’s less likely to die of COVID-19 compared to non-white Americans, who are subjected to more health-affecting hardships.

As a VIP patient, the president had the privilege of getting tested often, leading to an early diagnosis. He and the First Lady will have access to around-the-clock medical care and can easily afford the latest experimental treatments.

“The medical team is going to be under significantly more pressure,” UchÃ© Blackstock, MD, emergency medicine physician and founder of Advancing Health Equity, told Insider. “Because he is the president, and that may influence the decisions that they make, or have to make, about his course of treatment.”

Trump’s whiteness means he’s more likely to have a mild case of coronavirus, even after accounting for his age. As a white person, Trump has not been subjected to the structural racism that underpins the disparities in preexisting conditions and health outcomes between white Americans and Americans of colour.

“Structural factors including health care access, density of households, unemployment, pervasive discrimination, and others,” are what is driving COVID-19 disparities, and “not intrinsic characteristics of Black communities or individual-level factors,” an analysis by amfAR found.

As of August 18, the Centres for Disease Control and Prevention reported that Black and brown Americans are more likely to contract the coronavirus, require hospitalisation, and die of the disease. Black Americans are at least twice as likely to die of COVID-19 and nearly five times more likely to be hospitalized compared to white Americans, the report found.

The risk of hospitalisation and death increases with age for people of all races, but the race disparity in death rates persists. In Trump’s age bracket, adults aged 65-74, Black Americans have a death rate five times higher and Latinx Americans four times higher than their white counterparts, per a Brookings Institute analysis of CDC data.

Additionally, the layers of privilege that paved Trump’s way to the presidency mean that he’s previously had access to healthcare and hasn’t been subjected to the structural forces that discriminate against poor people and people of colour in this country, Jeremy Faust, MD, told Insider.

“The thing about being a VIP is that it means that you already have a lot of good things going for you,” Faust, an emergency medicine doctor at Brigham and Women’s Hospital, said. “It means that you don’t have the disadvantages that face so many Americans today: that they lack primary care, and therefore they develop preexisting conditions that were possibly preventable if it weren’t for the lack of access.”

Trump’s ability to get tested frequently led to an early diagnosis, which bodes well for his recovery

The president gets tested for coronavirus often â€” at least every two or three days â€” so he and the First Lady were able to be diagnosed in the early stage of their illness. They will likely be watched closely and treated immediately if their conditions worsen.

“The sooner you are diagnosed, the sooner you can be monitored for symptoms and signs of deterioration,” Blackstock said. “And if you start worsening, you can be given some therapeutics, given oxygen, and that can actually help improve outcomes.”

On Friday, Blackstock said she wouldn’t be surprised if Trump’s medical team took a more aggressive approach and started a treatment like remdesivir, which has been helped some hospitalized COVID-19 patients recover faster, before his condition worsens to the point of requiring hospitalisation.

Since then, the president has begun a five-day course of remdesivir, and he has also received an experimental antibody cocktail and the steroid dexamethasone.

Another factor in Trump’s recovery is that he won’t have to worry about the cost of the treatments he may need, many of which are “incredibly expensive” and some not even available at community hospitals, Blackstock said.

While Trump’s VIP status means he’ll likely get more care, doing the most is not always in the patient’s best interest, Faust told Insider.

“There’s this illusion that doing more is somehow better,” Faust said. “Of course, that’s not true when the things you’re doing haven’t been proven to work. So what you’re really doing in those situations is you’re potentially putting your patients at risk without really giving them much of a benefit.”

Trump will have access to a host of experimental treatments in various stages of FDA approval. To date, he’s received a not-yet-approved antibody treatment made by the biotech company Regeneron, as well as remdesivir and dexamethasone, which have both been approved for emergency use.

Dexamethasone, a common steroid found to reduce the mortality rate for COVID-19 patients who require ventilators, can be harmful for those who opt to take it early. Patients with no symptoms or mild symptoms actually worsened on the steroid, Faust said. Trump was administered dexamethasone over the weekend, according to his doctors.

“Regardless of what they want to say to the media, I can’t imagine any physician in good mind, knowing that data right now, would be pulling the trigger on these medications if the patient wasn’t deteriorating,” Galiatsatos told Insider. “I understand there’s conflict, but I’m hoping clinical judgment has not been lost in a time like this.”

But Trump could push for aggressive treatment regardless of what the science, and his own doctors, have to say.

“Donald Trump is the VIP of VIPs â€” and just by his personality, he’s aggressive, he wants to do stuff,” Faust said. “I don’t envy the physicians who have to have these conversations.”