Trump's waging a phony war against the military-industrial complex

“America First” is both a campaign slogan and a flexible iteration of right-wing nationalism, used over decades to justify everything from isolationism in the face of literal Nazis â€” “not our problem” â€” to invading Iraq in unilateral defiance of the United Nations and liberal busybodies in Europe.

The flexibility of the slogan-doctrine is embodied by Donald Trump, a US president who has advocated for war crimes while bashing “forever wars.” He has escalated nearly every conflict he inherited while withdrawing troops from peacetime Germany; and all the while calling his generals both “p—ies” and warmongers. His is a foreign policy of erratic militarism, one that disdains any action that reeks of helping others â€” sometimes mistaken for a principled, noninterventionist mindset â€” but eager to drop a bomb if it will play well on American television.

Outside of a peculiar deference to Russian interests, the only real constant is opportunism: saying, but only sometimes doing, that which seems popular at the moment.

So, in a jam over reportedly calling dead US soldiers “losers” and “suckers,” Trump this week picked up on a tactic adopted by some of his supporters, acting as if the disparaging leaks were merely a byproduct of his war on the deep state. While denying the report, the president who put a defence industry lobbyist in charge of the Pentagon, implied its anonymous sources were only serving the military-industrial complex.

“They want to do nothing but fight wars,” Trump said of US military leaders, “so that all of those wonderful companies that make the bombs and make the planes and make everything else stay happy.”

This is an odd line of attack. This US president has increased spending on the US military â€” and by extension, its suppliers and contractors â€” each year that he has been in office up to the proposed $US705 billion for this year. He has also used that military in a way that benefits the makers of bombs and planes, and by design.

It only took Trump 48 months to authorise as many drone strikes as Barack Obama did over eight years. Just weeks into his administration, a US airstrike in Syria resulted in a massacre: dozens of civilians killed as they worshipped inside of a mosque. That proved just to be the first shot in a ramped US war on terror across Syria and Iraq â€” one that saw an average of 80 civilian deaths each month, under the previous administration, jump to more than 360.

In 2019, the president dropped a record number of bombs on Afghanistan, in the process killing more civilians than the Taliban, and mused about wiping Afghanistan “off the face of the earth.” Even a pandemic didn’t hinder this administration’s propensity to escalate: by April 2020, more US bombs had been dropped on Somalia than in any previous year on record.

BANARAS KHAN/AFP via Getty ImagesPakistani protesters burn a US flag and a banner bearing an image of the US President Donald Trump during a demonstration against a US airstrike in Afghanistan in Quetta on April 3, 2018. The United Nations said on April 3 it was investigating ‘disturbing reports of serious harm to civilians’ in an Afghan airstrike on a religious school that security sources say left dozens of children dead or wounded.

That’s a lot of money for the US defence industry. But expanding a US-led war is not the only way to benefit US arms makers, as Trump himself knows â€” he’s boasted of selling hundreds of billions of dollars in weapons to Saudi Arabia, furthering its aimless war in Yemen, and asked “US military attaches and diplomats to help drum up billions of dollars more business overseas for the US weapons industry,” as Reuters reported in 2018.

This is indeed one area where Trump has fulfilled a promise. In 2016, the president campaigned on “bombing the hell” out of suspected terrorists with the help of skyrocketing military budgets; saying he would target the family of a terrorist â€” women and children â€” too, and complaining when his intelligence agencies have failed to do so.

Scott Olson/Getty ImagesFREELAND, MICHIGAN – SEPTEMBER 10: Vendors offer merchandise for sale outside of a rally with President Donald Trump on September 10, 2020 in Freeland, Michigan. Recent polls show Joe Biden has a slight lead in the battleground state.

But there is an alternate reality, inhabited by some pundits and Republican politicians, where a president who has never been hesitant to inflame a conflict is portrayed as something of a peace activist.

“President Trump is the first president in a generation to seek to end war rather than start one,” US Sen. Rand Paul claimed at the Republican National Convention. “He is bringing our men and women home.”

But if some US troops are now coming back, that’s only because President Trump deployed them abroad. In Afghanistan, Trump reversed a drawdown, increasing the number of boots on the ground from 8,400 to 14,000 to accompany his record-breaking campaign of airstrikes.

In Iraq, Trump’s predecessor reduced the number of troops from 177,000 to about 5,500; 10 months into the job, Trump had increased that to just under 9,000, an increase of 60%. Only after the Iraqi parliament voted to expel foreign troops did Trump, following years of intensified war â€” and amid a reelection campaign â€” announce that he would bring some, but not all, home. 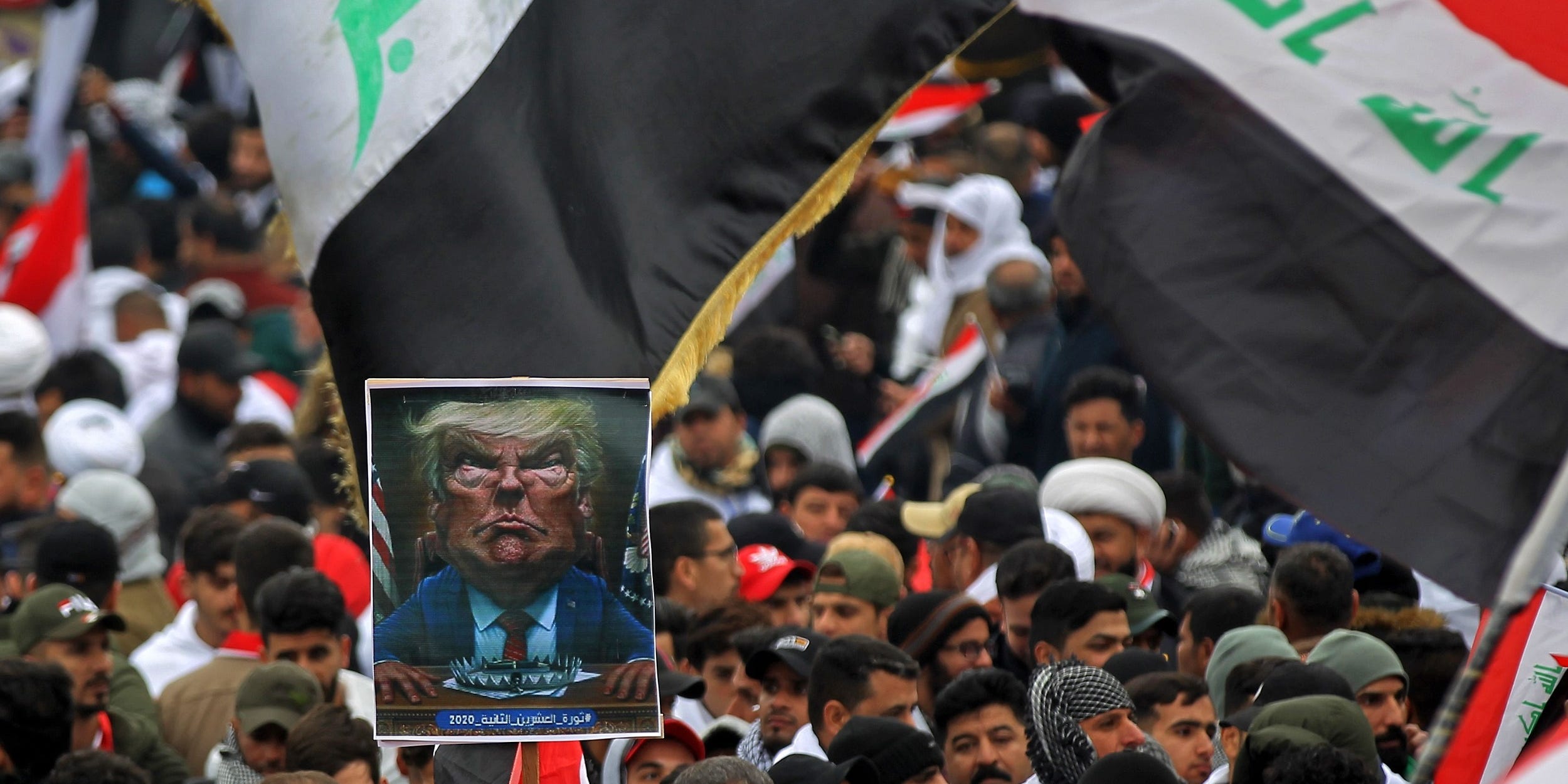 AHMAD AL-RUBAYE/AFP via Getty ImagesProtesters carry a caricature of US President Donald Trump as supporters of Iraqi cleric Moqtada Sadr gather in the capital Baghdad for a ‘million-strong’ march to demand an end to the presence of US forces in their country, on January 24, 2020.

Does Trump deserve credit for “bringing our men and women home?” Yes, if it’s qualified with an observation: he’s the one who ordered them were away. And bringing them home, not from a war zone but from Germany â€” while keeping the drone killing machines in the skies, from Africa to Central Asia â€” speaks to the motivation here: not ending war, to protect human life, but to ending any relationship that isn’t based in easily digestible self-interest.

Military leaders may balk at rupturing traditional alliances, and needing to explain their commander’s tweets to colleagues in NATO, but reporting suggests it hasn’t been the generals with an itchy air-raid finger.

“You had to be careful what options you gave him,” one former Trump staffer, Joseph Yun, told CNN, describing fears that the president might start a war, intentionally or not, over North Korea. “We were being very cautious because any options you put out there, he could use them.”

That appears to have been the case with Trump’s decision to kill Iranian general (and war criminal) Qasem Soleimani: the decision to violate Iraqi sovereignty may have expedited the removal of US troops, but it was not deeply considered, having been made in a room at Mar-a-Lago. Pentagon officials only gave the option in the hopes that it would make the less aggressive choices seem more palatable, The New York Times reported. “They didn’t think he would take it.”

In professing to oppose war (and the laws governing it), Trump is not so different than any other president; no leader campaigns on their willingness to start one, and every Democrat who ran to replace Trump this year, including the eventual nominee, has pledged to reduce overseas adventurism. Few objected to the goal of withdrawing a couple of hundred troops from Syria, for example; the objection was hastily announcing it via tweet, to the mutual benefit of a tyrant in Damascus and a strongman in Turkey (and then not really following through). 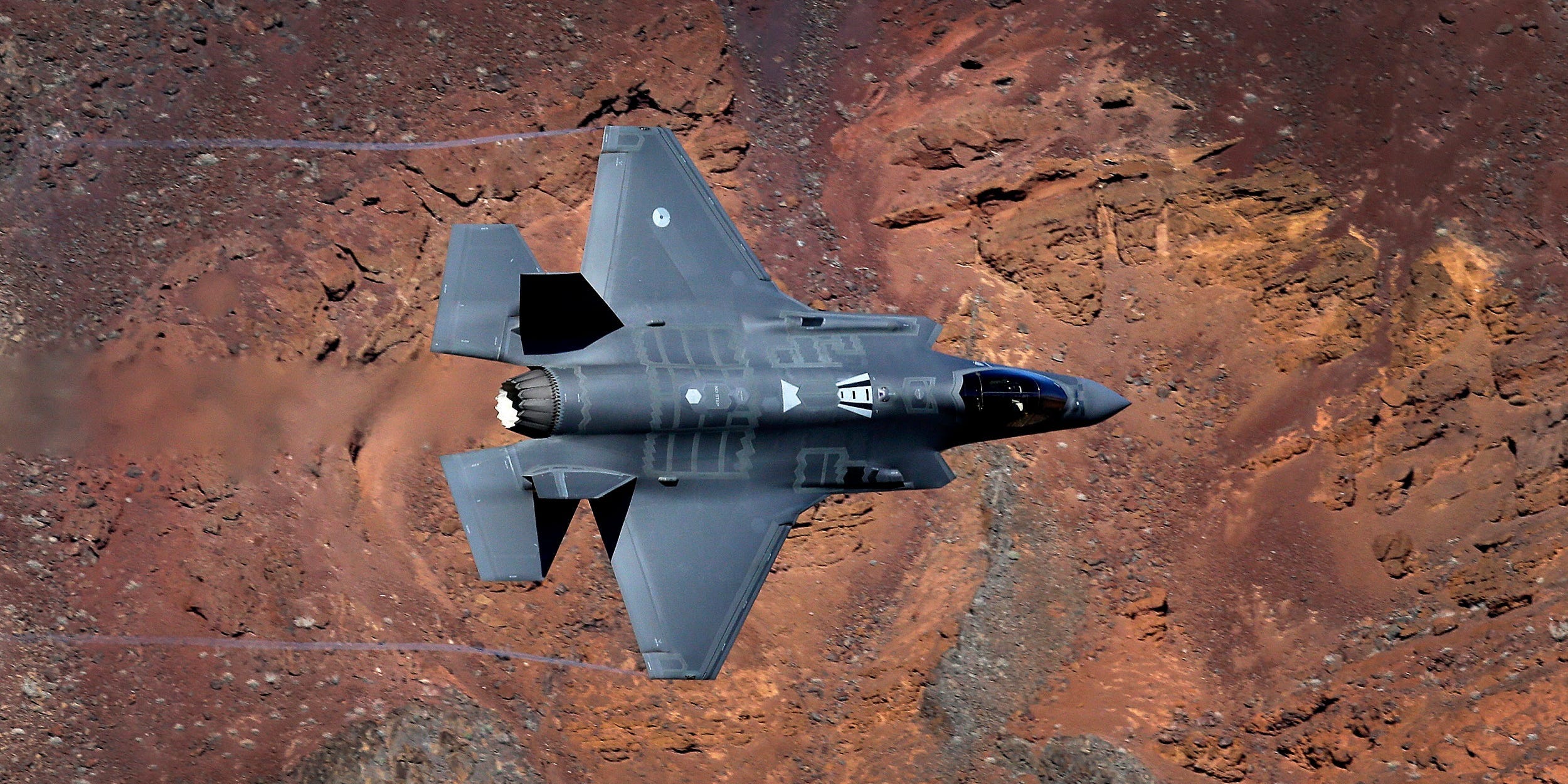 AP Photo/Ben Margot, FileIn this Feb. 28, 2017, file photo, a Lockheed Martin F-35A Lighting II from the 323 Squadron, Royal Netherlands Air Force flies through the nicknamed Star Wars Canyon on the Jedi transition in Death Valley National Park, Calif. Shares of three major U.S. defence contractors are hitting all-time highs, Monday, May 22, 2017, in the first day of trading after President Donald Trump bestowed Saudi Arabia with a $US110 billion arms deal. The deal, which could expand up to $US350 billion over 10 years, sent shares of Lockheed Martin Corp., Northrop Grumman Corp. and Raytheon Co. to unprecedented heights.

Some, seeing a Republican convention where isolationist rhetoric was more popular than George W. Bush, might think we have entered a period of political realignment: that Trump, with his attacks on the Iraq war and its architects like John Bolton, and expressed desire to get along with a nuclear-armed Moscow, represents the unlikely side of doves. And Democrats, by not as aggressively pursuing appeasement toward Russia, are now the party of neoconservatism and a new Cold War.

But Trump’s actions in office, which include bad-mouthing Bolton only after he hired him, suggest instead that we have entered a period not of realignment but of shamelessness. Those who boosted the invasion of Iraq can question their opponent’s patriotism in one Republican presidency, and pivot, sans apology, to calling them warmongers in the next. It’s an age of saying one thing, doing another, and taking credit or assigning blame based on the political needs of the next 30 minutes â€” confident that social media limits the public’s memory to the last 30 seconds.

Pay attention for longer than a news cycle, though, and this much becomes clear: that Donald Trump is quite fond of deploying military force, whether at home or abroad, and under his command, the military-industrial complex is doing just fine.