Trump's impeachment defence is basically 'Don't hold me accountable for violence or there might be more violence.' 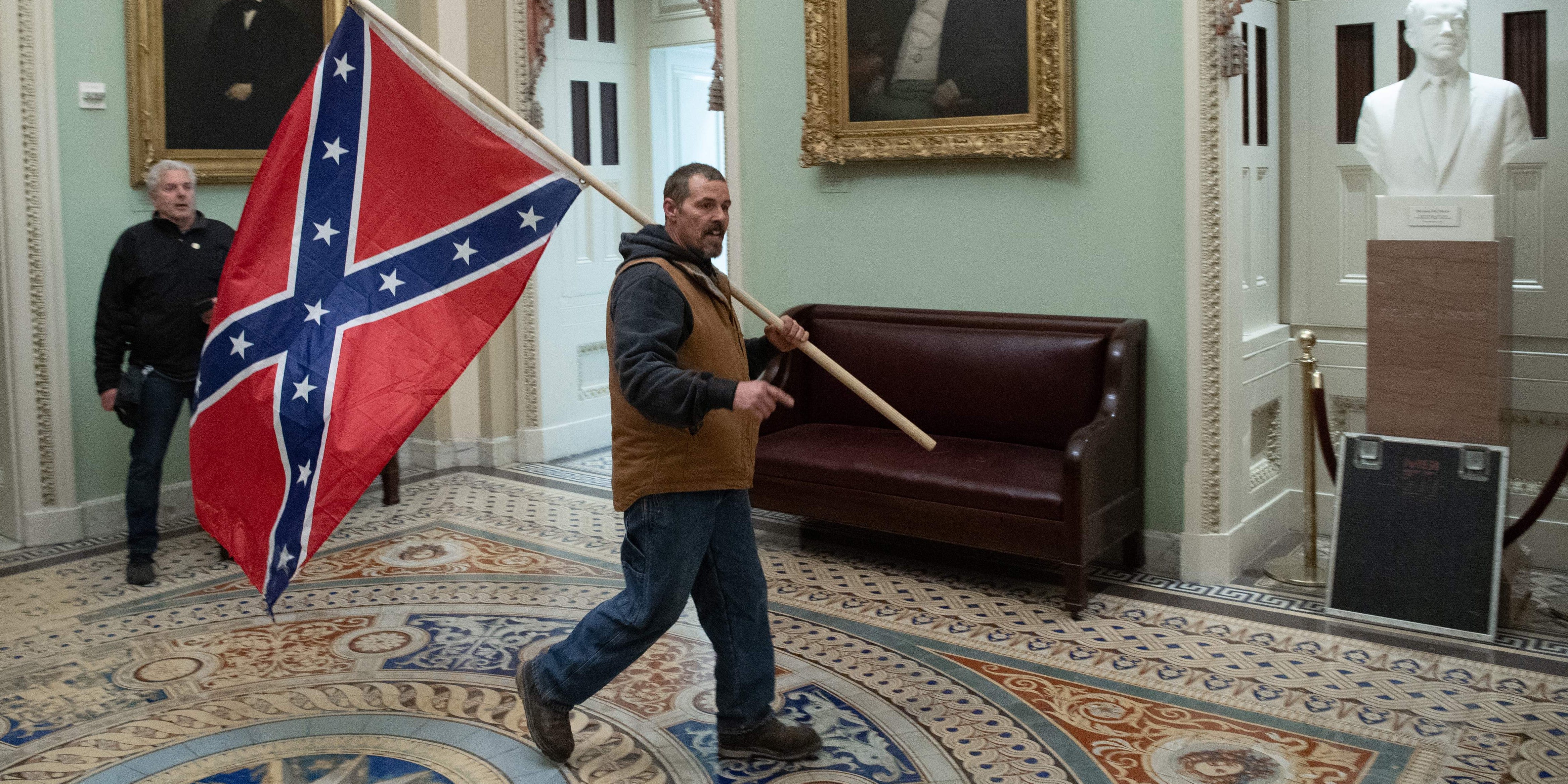 SAUL LOEB/AFP via Getty ImagesSupporters of US President Donald Trump protest in the US Capitol Rotunda on January 6, 2021, in Washington, DC.

It was a defence by way of a veiled threat.

David Schoen, one of the lawyers defending twice-impeached former President Donald Trump said during an opening statement Tuesday: “This trial will tear this country apart, perhaps like we’ve only ever seen once in history.”

The “once in history” Schoen was almost certainly referring to was the Civil War, which resulted in upwards of 750,000 dead Americans.

It’s also a war where one side was fighting to preserve the institution of slavery, making it unimpeachably more evil than the other.

Schoen didn’t elaborate on his provocative point, so we don’t know on which side of the Union vs. Confederate fight he’d metaphorically place Trump supporters â€” even if some of them stormed the Capitol carrying the secessionists’ battle flag.

The insurrectionists also smeared faeces on the walls of the Capitol, threatened national security, and contributed to the killing of a police officer and injuries to at least 140.

Such trivialities don’t concern the 45th president’s lawyer. It’s the fact that the trial is happening at all that, to their minds, is a threat to the future of the Republic.

But Trump’s counsel unwittingly said the quiet part out loud.

Schoen â€” and many others arguing against the trial â€” are using the threat of more violence to demand no accountability for the previous violence.

This isn’t the language of someone looking to turn down the temperature, it’s a threat.

Republicans have taken to calling this a “show trial,” which is both correct and totally wrong.

But it’s also a correct analogy, because most Senate Republicans have made it clear that they think the trial itself is illegitimate because the defendant is no longer in office. Their participation in the trial is purely ceremonial.

With acquittal all but guaranteed, the Republican argument against impeachment is that it’s merely an act of vengeance.

And it’s not so much Trump that they’re worried about, it’s the tens of millions who voted for him that would be “disenfranchised” by the trial.

This is all madness.

But trying to strong arm elected officials and the vice president to overturn election results is. For that matter, so is inciting a violent mob to forcefully stop the certification of an election.

That’s what the trial is about. Not vengeance, but justice and accountability.

Schoen’s implication that holding a former president to the law for actions committed while still in office would lead to a Civil War-level of division would be asinine if it weren’t so dangerous.

Republicans with any sense of integrity should take the president’s lawyer’s words as a challenge, and at least admit that the trial itself isn’t an exercise in partisan hackery or a justification for further political violence.

Making Trump answer for his crimes against American democracy, in the form of a Senate trial, isn’t an act of violence. And shame on anyone who tries to pre-normalize further political violence in response to impeachment.