Trump has repeatedly been endorsed by white supremacist groups and other far-right extremists, and they have looked to him as a source of encouragement 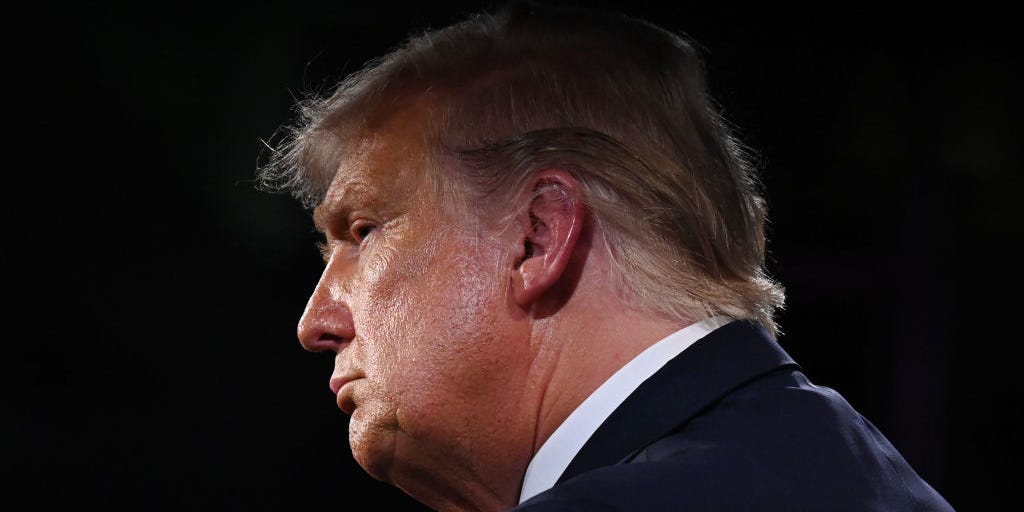 President Donald Trump refused to explicitly condemn white supremacist groups during the first 2020 presidential debate on Tuesday, instead opting to issue a rallying cry to a far-right extremist group with a history of engaging in street violence.

“Are you willing, tonight, to condemn white supremacists and militia groups and to say that they need to stand down?” debate moderator Chris Wallace asked.

“Proud Boys, stand back and stand by! But I’ll tell you what, somebody’s got to do something about antifa and the left,” Trump said, after additional prompting from former Vice President Joe Biden.

The Proud Boys are a far-right group of self-described “western chauvinists.” The group has rejected the notion that it promotes white supremacy, even as its leaders regularly share white nationalist memes and “maintain affiliations with known extremists,” according to the Southern Poverty Law Centre. The SPLC considers the Proud Boys to be a hate group.

The Proud Boys have frequently been involved in street violence, and a former Proud Boys member helped organise the “Unite the Right” rally that prompted deadly violence in Charlottesville, Virginia, in August 2017.

After Trump’s comments during the Tuesday night debate, far right groups took to social media to celebrate, and experts on extremism warned that the president essentially just helped the Proud Boys recruit.

Rita Katz, the executive director of SITE intelligence Group, which tracks far-right groups, told the Washington Post that Trump “legitimized” the Proud Boys in a way that “nobody in the community expected.”

“It’s unbelievable. The celebration is incredible,” Katz said. “In my 20 years of tracking terrorism and extremism, I never thought I’d see anything like this from a U.S. president.”

Chris Wallace: "Are you willing, tonight, to condemn white supremacists and militia groups and to say that they need to stand down…"

Trump: "Proud Boys, stand back and stand by! But I'll tell you what, somebody's got to do something about antifa and the left." pic.twitter.com/4vrPocKzcu

The president on Friday claimed he doesn’t know who the Proud Boys are, but the damage was already done. The group got a massive boost on social media and was trending topic on Twitter for most of Friday.

As remarkable as it was to see a sitting US president dodge an opportunity to decry white supremacists while elevating a far-right extremist group, what happened on Tuesday was not an isolated incident for Trump.

For years, white supremacists have looked at Trump’s racist, xenophobic rhetoric as a source of encouragement. And some of the most prominent far right groups have openly embraced and endorsed the president.

Trump has not made a particularly strong effort to disavow their support, and his behaviour has often aligned with their toxic worldviews. Earlier this month at a rally in Minnesota, for example, Trump told a crowd of nearly all white supporters that they have “good genes,” echoing the views of neo-Nazis that white people are genetically superior.

In 2016, the Ku Klux Klan’s official newspaper endorsed Trump for president. The Trump campaign denounced the endorsement, even as Trump continued to spread disinformation on immigrants and refugees in an effort to dehumanize and villify them.

Shortly after Trump won the election in 2016, white nationalists gathered for a conference in Washington to celebrate Trump’s victory with Nazi salutes. Richard Spencer, a well-known neo-Nazi, in a speech opening up the conference said: “Hail Trump, hail our people, hail victory!”

Trump quickly disavowed Spencer, but his behaviour did not change. The president put barring people from Muslim countries from the US at the top of his agenda after being inaugurated, despite slim evidence it would benefit US national security in a palpable way.

In one of the most infamous moments of his presidency, Trump in August 2017 blamed “many sides” for deadly neo-Nazi violence in Charlottesville. The president said there were “very fine people” on “both sides.” Trump and his allies have since claimed that Democrats and the media have embellished his remarks after the white nationalist rally, but what he said is on video and can also be found on the White House website (which transcribes his public remarks).

Pres. Trump on Charlottesville: "There's blame on both sides…you also had people that were very fine people on both sides." pic.twitter.com/ayX9eHABsN

White nationalist groups were also encouraged by Trump’s response to Charlottesville and the false equivalence he presented between violent neo-Nazis and counterprotesters. Former Ku Klux Klan leader David Duke at the time celebrated Trump’s remarks via Twitter, thanking the president for condemning the “leftist terrorists.”

After the backlash to his initial remarks, Trump issued a more forceful condemnation of white nationalist groups. But it was too little too late.

Amid ongoing protests over racism and police brutality following the death of George Floyd, Trump has relied heavily on white supremacist ploys in an effort to boost his reelection campaign. The president has lauded supporters who’ve headed into Portland to confront and antagonize anti-racism protesters, which has already had deadly consequences. Meanwhile, he’s decried those protesting racism as “terrorists” and praised violent crackdowns by law enforcement.

Trump’s condemnation of white supremacist groups has almost always been prompted by widespread backlash over comments he’s made in concert with their ideologies. This pattern has played out over and over throughout his tenure, with virtually no changes in his overall behaviour. As the US draws closer to Election Day, Trump appears to have abandoned the facade altogether.

Former Vice President Joe Biden called Trump a “racist” to his face on the debate stage on Tuesday, and the president didn’t flinch.