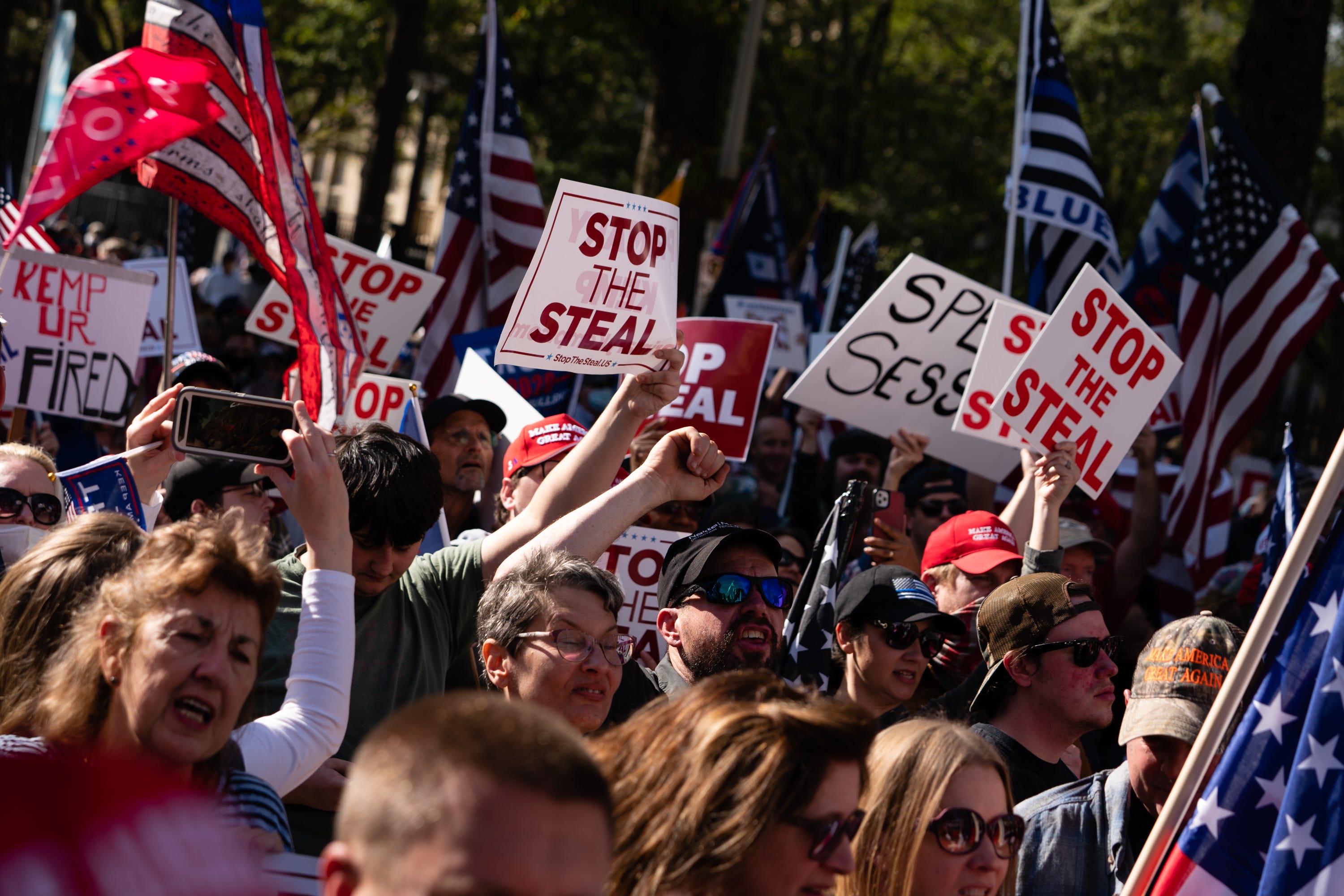 Elijah Nouvelage/Getty ImagesProtesters rally outside the Georgia State Capitol during a ‘March for Trump’ protest against the results of the 2020 Presidential election on November 21, 2020 in Atlanta, Georgia.

President Donald Trump is fuelling a wave of hatred and violent threats toward local officials in key swing states where he’s challenging the 2020 election results.

“So this is fun…multiple attempted hacks of my emails, police protection around my home, the threats,” Gabriel Sterling, the voting system implementation manager for Georgia’s Secretary of State, wrote on Twitter on the weekend.

Sterling, a Republican, shared the social media post one day after Georgia officially certified President-elect Joe Biden as the winner of its 16 electoral votes. Trump’s team immediately requested a recount, even though an audit that included a hand recount of more than 5 million ballots cast statewide put Biden in the lead by roughly 12,000 votes.

A PBS “Frontline” investigation also showed that state officials in Pennsylvania, Michigan, Arizona, and Nevada are facing death threats. Biden is projected to carry each state and the Trump campaign has launched multiple lawsuits to overturn those results, but hasn’t won any so far. Still, Trump refuses to concede to Biden and continues to push unfounded claims that fraudulent ballots led to the election being stolen from him.

Local law enforcement officials are investigating the threats that come as poll workers tirelessly tally votes ahead of each state’s certification deadline in the coming days.

Georgia’s Secretary of State Brad Raffensperger has voiced concerns about death threats directed at him and his wife. He is a Republican and certified the state’s results on Friday.

“The Raffenspergers should be put on trial for treason and face execution,” read a text message that his wife received after the election.

Judges previously rejected two of Trump’s legal bids in Georgia since there is no evidence of electoral fraud or voting irregularities.

Republican City Commissioner of Philadelphia Al Schmidt disclosed earlier this month that his office got death threats for counting votes, while the Trump campaign was trying to halt the count.

“From the inside looking out, it feels all very deranged,” Schmidt said in a “60 Minutes” interview.

Trump’s lawyers alleged that Republicans weren’t present to watch the vote-counting process. It was later revealed that GOP poll watchers were indeed present, prompting a judge to dismiss the case. The president’s legal team has filed 11 lawsuits in the state, losing nine, with two pending.

Pennsylvania is expected to certify its election results on Monday.

Canvassers in Michigan, where Biden is ahead by more than 155,000 votes, are expected to certify the state’s Electoral College votes on Monday.

In the interim, local workers have fended off threats, including during a Zoom meeting when a person interrupted the call with threats of rape and violence, according to PBS.

PBS reviewed a police report of a November 6 call to Nevada’s Secretary of State Election Division, in which the person said: “You all are lucky there that I am an elderly man that is too old to fight and don’t own any guns, but I’ll tell you what, you’re about to get bum rushed by a bunch of young, 20-year-old boys. You’re worthless.”

Trump’s lawyers have lost two cases attempting to stop the ballot count in the state. Nevada officials are preparing to certify Biden as its election winner on Tuesday.

Threading a needle while riding a bike:’ How Republicans with 2024 ambitions are navigating the prospect of another Trump White House campaign

Arizona’s Secretary of State Katie Hobbs, a Democrat, said last week that she has faced “ongoing and escalating” threats as did her family and staff.

“Let’s burn her house down and kill her family and teach these fraudsters a lesson,” said one social media post aimed at Hobbs, according to the Associated Press.

Two lawsuits by the Trump campaign have been rejected in Arizona due to baseless assertions that Republican votes were being thrown out and invalidated. Biden’s win in the state will be certified next week.