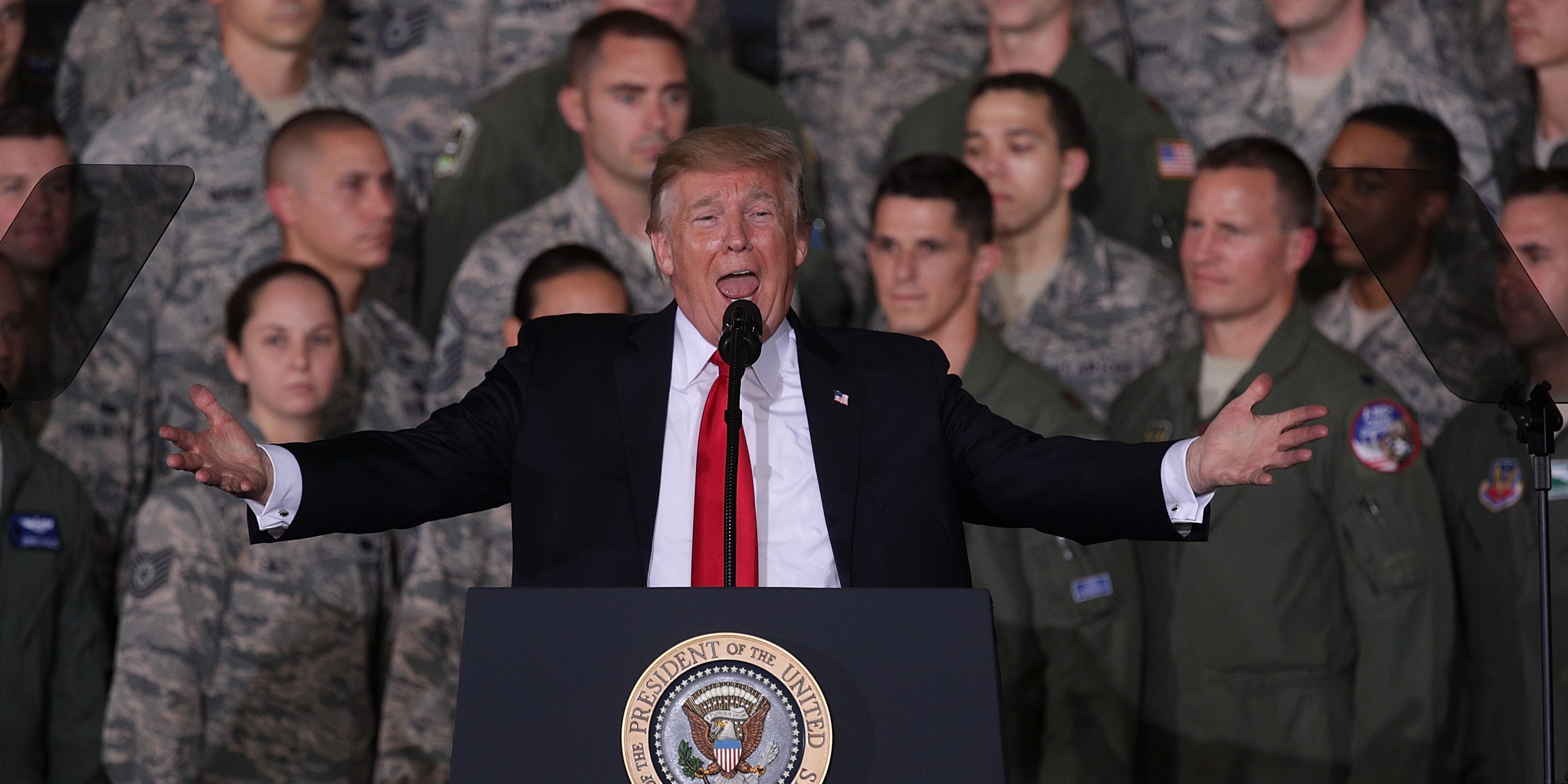 Alex Wong/Getty ImagesU.S. President Donald Trump speaks to Air Force personnel during an event September 15, 2017 at Joint Base Andrews in Maryland. President Trump attended the event to celebrate the 70th birthday of the U.S. Air Force.

President Donald Trump is demanding that ballots coming in after Election Day be tossed as ballots from military voters are likely still arriving in key battleground states like Pennsylvania, North Carolina, and Georgia.

Trump, the commander-in-chief of the armed forces, tweeted in all caps Thursday morning that “ANY VOTE THAT CAME IN AFTER ELECTION DAY WILL NOT BE COUNTED!”

Not only would not counting these votes potentially disenfranchise thousands of military voters, but it would also break the law in a number of states.

In 2016, more than 250,000 active-duty military personnel voted by absentee ballot, according to the US Election Assistance Commission. This year, that number is expected to be higher,Military.com recently reported. In North Carolina, 9,749 military absentee ballots have already been cast. That’s thousands more than the last election, according to The Hill.

Absentee voting rights for US military personnel deployed overseas or in domestic locations away from home are guaranteed by the Uniformed and Overseas Citizens Absentee Voting Act. States often provide additional assistance to protect these votes.

In more than two dozen states and DC, ballots from US military personnel are allowed to be counted after the polls close on Election Day. In Pennsylvania, for example, ballots have to be signed by Nov. 2 but can be received as late as Nov. 10, according to Count Every Heroes, an organisation dedicated to making sure military votes count.

NOT TRUE, and below is a @McClatchy chart of how long #Military #AbsenteeBallots have to be counted in each of those critical #Georgia #Pennsylvania2020 #NorthCarolina2020 battleground states. @realDonaldTrump –
"ANY VOTE THAT CAME IN AFTER ELECTION DAY WILL NOT BE COUNTED!" pic.twitter.com/Eetc649NBQ

“We won’t know the exact number of ballots outstanding, but past elections show the importance of counting these votes,” Jack Noland, research manager at Count Every Heroes, told The Hill. “An important caveat is that we can’t know for certain, but I think it goes without saying that if the race becomes particularly tight these ballots could be vital.”

Thousands of military ballots potentially still rolling in could have a significant impact in the presidential race, as well as some of the ongoing congressional races, but the president is determined to see that these votes go uncounted â€” even though if the counting of legal ballots stopped now, Biden would win the presidency.

The president has already tried to declare victory and claim states where votes are still being counted.