Trump had a meltdown and yelled at aides backstage when he realised how empty his rally in Tulsa was, reports say 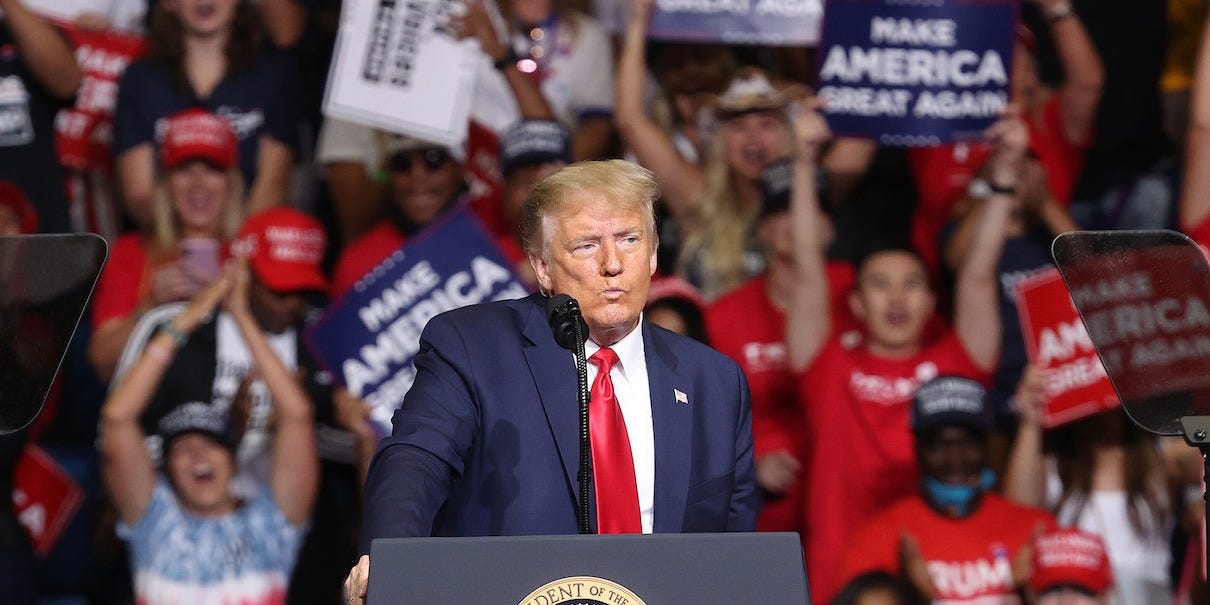 Win McNamee/Getty ImagesPresident Donald Trump at a campaign rally at the BOK Centre in Tulsa, Oklahoma, on Saturday.

President Donald Trump yelled at aides backstage at the BOK Centre in Tulsa, Oklahoma, when he realised how low the turnout was for his rally there on Saturday, The New York Times reported on Sunday.

About 6,200 people showed up to the 19,000-seat venue, despite the Trump campaign’s confident assertions that nearly 1 million people had expressed interest in the event.

A person familiar with the discussions told NBC News that the president was already frustrated that news coverage of the rally had been dominated by the revelation that six members of his campaign team tested positive for the coronavirus.

He was warned on Air Force One about the disappointing audience numbers but boiled over when he saw for himself how empty the venue looked, The Times reported, citing four people familiar with what happened.

The four people told the paper that the president yelled at aides when he saw the sparsely filled seats from backstage. NBC News reported that multiple people close to the White House described Trump as “furious.”

Advisers told The Times that Trump’s mood rallied as he gave the two-hour address on stage but that he appeared deflated afterward.

Citing officials with knowledge of the events, The Washington Post reported that Trump fumed on Air Force One on his way back to the White House and through the rest of the weekend.

Widely shared video footage showed the president arriving at the White House with a dejected expression, his red tie undone and a “Make America Great Again” cap in his hand.

OVERNIGHT: President Trump arrives at the White House from Joint Base Andrews. He is holding a 'Make America Great Again' hat. pic.twitter.com/6mcskCpgA8

Numerous reasons have been given for the low turnout. Expectations may have been inflated by TikTok users and K-pop fans who registered for the event in large numbers with no intention of attending.

There were few reports of protests. The Post said that one point a group of protesters blocked an entrance to the venue for about 15 minutes, though most people had already entered.

He instead blamed the low turnout on “a week’s worth of the fake news media warning people away from the rally because of COVID and protestors.”

Campaign advisers have since emphasised the event’s online reach, according to The Hill. Tim Murtaugh, the communications director for the campaign, said the rally attracted more than 4 million viewers.