That’s according to the veteran reporter Bob Woodward’s upcoming book, “Rage,” set to be released next Tuesday. Insider obtained a copy of the book.

Woodward conducted 18 wide-ranging interviews with the president for the book, as well as interviews with multiple senior White House officials and former administration officials. Still, Trump last month slammed the book as “a FAKE, as always, just as many of the others have been.”

Woodward wrote that Trump called him on January 22 shortly after attending the World Economic Forum in Davos, Switzerland. During the conversation, Woodward pressed the president about Khashoggi’s gruesome murder.

Khashoggi, 59, a longtime Washington Post columnist known for his criticism of the Saudi kingdom, was assassinated and dismembered at the Saudi Consulate in Istanbul on October 2, 2018, after going there to get paperwork for his upcoming marriage.

The CIA concluded a little over a month later that Prince Mohammed, also known as MBS, had personally ordered Khashoggi’s murder.

“The people at the Post are upset about the Khashoggi killing,” Woodward told Trump on January 22, his book says. “That is one of the most gruesome things. You yourself have said.”

“Yeah, but Iran is killing 36 people a day, so â€”” Trump began, before Woodward redirected the conversation and continued to press Trump about MBS’s role in ordering Khashoggi’s killing.

The White House did not offer a comment when contacted by Insider.

When a reporter pressed Trump on Thursday about what the president meant when he said he’d “saved” the Saudi leader’s “arse,” Trump replied: “You’ll have to figure that out yourself.”

During his January 22 conversation with Woodward, the president said: “Well, I understand what you’re saying, and I’ve gotten involved very much. I know everything about the whole situation.”

Trump added that Saudi Arabia spent billions of dollars on US products. He also stressed MBS’s claim that he’s innocent, though US intelligence and other foreign intelligence agencies have concluded otherwise. 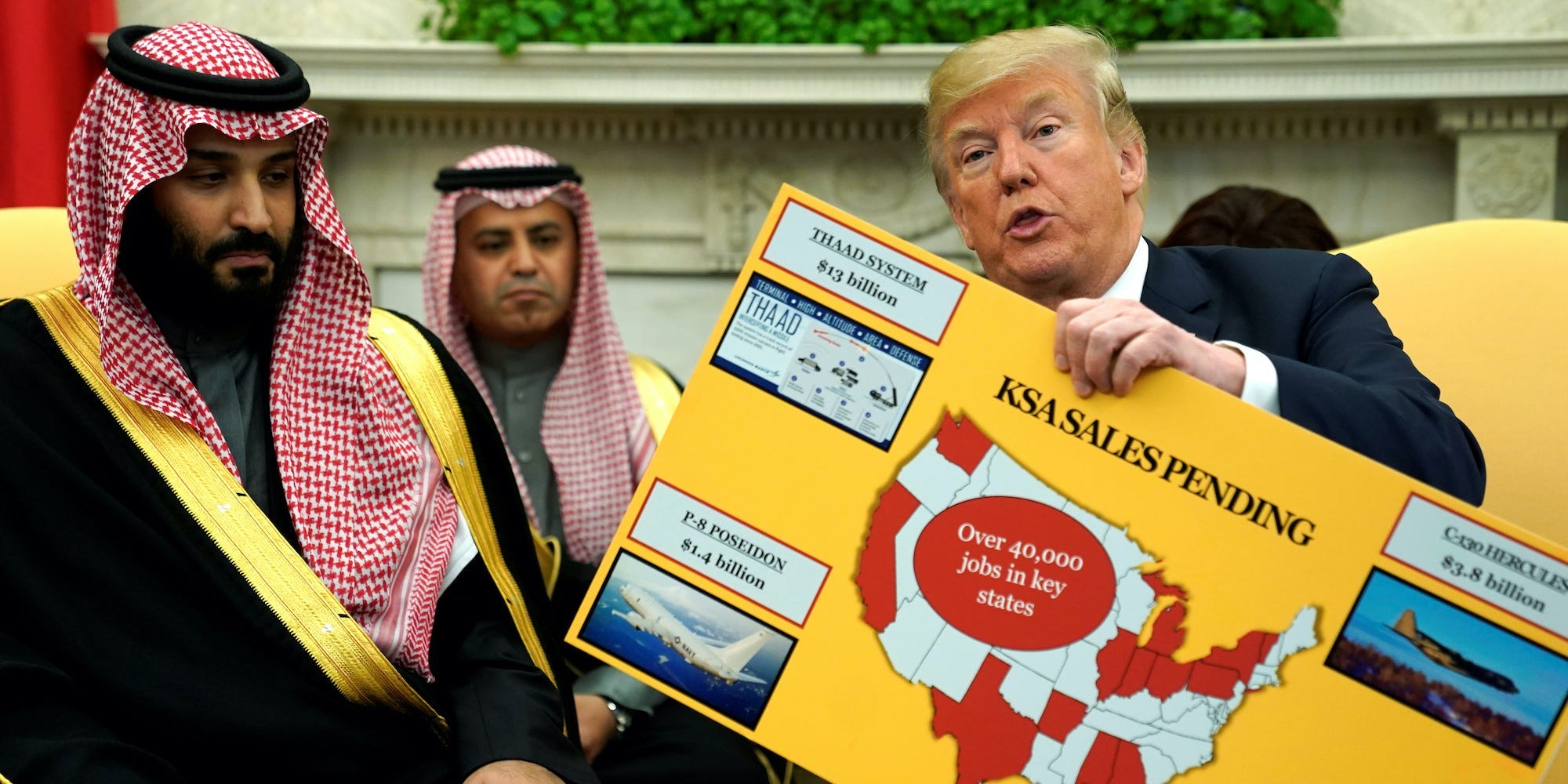 Jonathan Ernst/ReutersTrump holds a chart of military hardware sales next to Prince Mohammed in the White House on March 20, 2018.

“Do you believe that he did it?” Woodward asked.

“No, he says that he didn’t do it,” Trump replied.

“I know, but do you really believe â€”” Woodward said before Trump cut him off.

“He says very strongly that he didn’t do it,” Trump said. “Bob, they spent $US400 billion over a fairly short period of time.”

“They wouldn’t last a week if we’re not there, and they know it,” he said.

Last year, he vetoed a bipartisan bill to end US support for the Saudis in Yemen. The war in Yemen has led to a devastating humanitarian crisis, and the Saudi-led coalition has killed civilians using US-made bombs.

The president also bypassed Congress to push through an arms sale worth roughly $US8 billion to the Saudis and the United Arab Emirates, and he later vetoed several resolutions blocking the sale.

More recently, Trump has moved to circumvent a decades-old arms-control pact in order to sell weaponised drones to the Saudis and to other countries in the region, sparking backlash from Democrats and Republicans in Congress.