Trump is considering barring all officials from listening to his phone calls with foreign leaders, which could be 'catastrophic' for national security 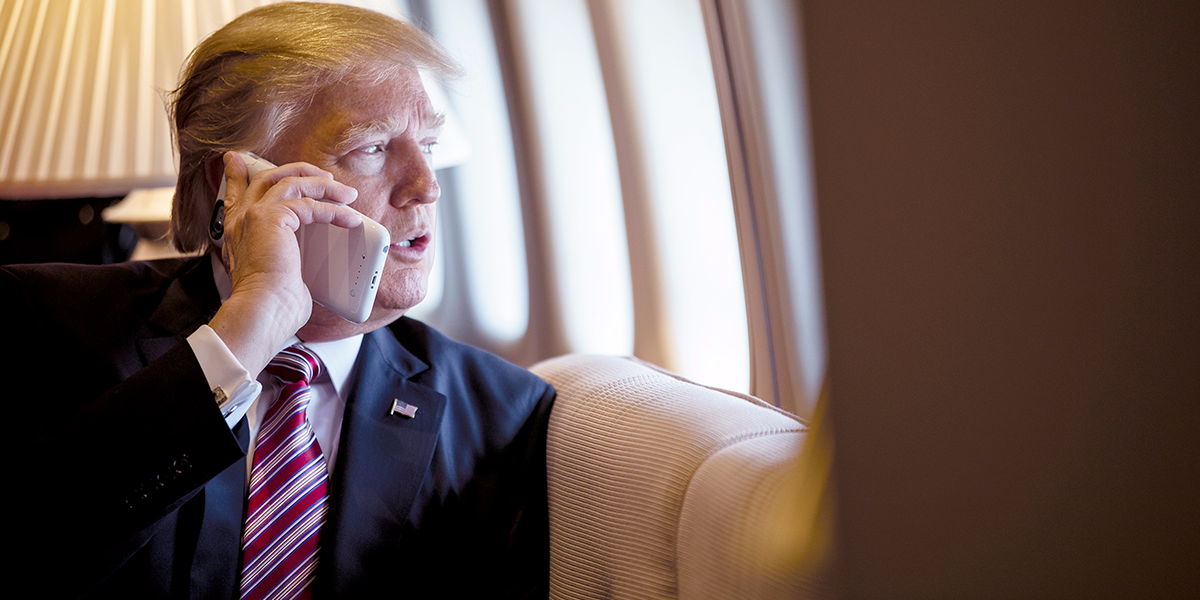 President Donald Trump said he might block all officials from listening in on his phone calls with foreign leaders.

“I may end the practice entirely,” Trump told the Fox News personality Geraldo Rivera in a radio interview that aired on Thursday.

It is a long-running practice for select White House staffers, national-security officials, and cabinet members to listen in on the US president’s phone conversations with foreign leaders, primarily to take notes and use the talking points to help craft foreign policy.

National-security veterans say there are serious risks associated with blocking officials from listening in on conversations with foreign leaders.

“The practice is indispensable to the coordination and implementation of sound foreign policy and national-security practices,” Edward Price, who served as senior director on the National Security Council under President Barack Obama, told Insider. “No president – but especially not this one – can or should be relied upon to backbrief senior advisers on details that can often be extraordinarily nuanced.”

Trump’s remarks show he’s “willing to forgo the potential utility of these discussions in order to see to it that he can fulfil his agenda, rather than the national interest, without would-be witnesses listening in,” Price added.

The national-security risks associated with Trump, in particular, are also significantly elevated.

The president has repeatedly acted recklessly with classified matters. In May 2017, he revealed top-secret intelligence the US got from Israel, a close ally, to two Russian officials during an Oval Office meeting.

Last year, he tweeted a photo from a classified briefing that intelligence experts said could provide a gold mine for foreign espionage services.

“Right now, President Trump is a nightmare to every intel and [national-security] officer, and this is all stuff he’s done with their knowledge,” one former senior National Security Agency official told Insider. “Allowing him to conduct these calls in private would be catastrophic for us.”

This isn’t the first time the president has sought to keep his conversations with foreign heads of state secret.

The Washington Post, which cited US officials, reported last year that “there is no detailed record, even in classified files, of Trump’s face-to-face interactions with the Russian leader at five locations over the past two years.”

The report said that after one meeting with Russian President Vladimir Putin in 2017, Trump told his interpreter not to tell other US officials what was said and then seized the interpreter’s notes.

At the G20 summit in 2018, Trump again met with Putin privately and without allowing a US official to attend the meeting and take notes.

Trump’s musing about conducting his calls with foreign leaders in secret come after an anonymous US intelligence official blew the whistle on his phone call in July with Ukrainian President Volodymyr Zelensky.

During the conversation, Trump repeatedly pressured Zelensky to investigate former Vice President Joe Biden, one of Trump’s 2020 rivals, and the Democratic Party as a whole.

Multiple people listened in on the call, including Secretary of State Mike Pompeo, members of the National Security Council who worked on Ukraine policy, and senior White House officials.

The whistleblower said several people had informed them of the contents of the call and raised concerns that Trump violated campaign-finance laws by soliciting foreign interference in the upcoming election. Lt. Col. Alexander Vindman, the NSC’s former top Ukraine expert, directly listened in on the call and immediately reported it to John Eisenberg, the NSC’s chief lawyer.

Eisenberg told Vindman not to tell anyone else what he’d heard, according to Vindman’s testimony in the impeachment inquiry against Trump. Eisenberg subsequently moved the full transcript of the call to a top-secret code-word NSC server typically used to store sensitive information pertaining to national security.

That phone call was the focal point of the impeachment inquiry, which culminated in the House of Representatives charging Trump with abuse of power and obstruction of Congress. Both charges were linked to his efforts to strong-arm Ukraine into intervening in the election while withholding nearly $US400 million in vital military aid and a White House meeting that Zelensky desperately wants and still hasn’t gotten.

Throughout the course of the investigation, testimony from Vindman and others revealed that the phone call was just one data point in a monthslong campaign by Trump and his allies to bully Ukraine to cave to his personal demands while leveraging US policy and taxpayer dollars to force Zelensky’s hand.

Last week, the Republican-controlled Senate voted to acquit Trump of both charges after refusing to hear new witness testimony or subpoena documents. Just one Republican senator, Mitt Romney of Utah, sided with Democrats to vote to convict Trump of abuse of power.