“I don’t kid.” –President Trump, confirming that he wasn’t joking when he said he asked officials to slow down coronavirus testing. 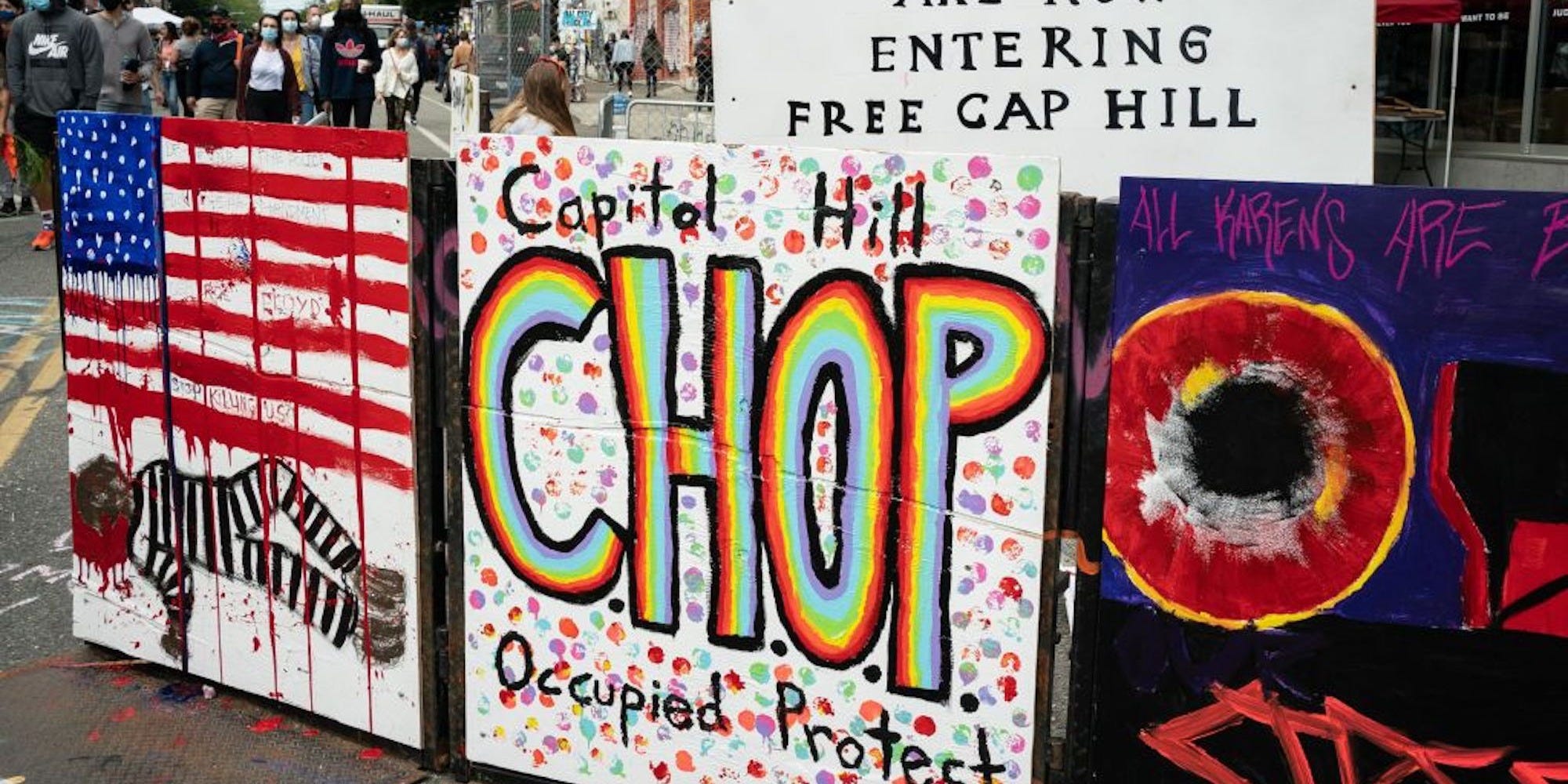 David Ryder/Getty ImagesA signs reads ‘Capitol Hill Occupied Protest’ in area that has been referred to by protesters by that name as well as ‘Capitol Hill Organised Protest, or CHOP, on June 14, 2020 in Seattle, Washington.

Trump wants to send another round of $US1,200 stimulus checks. Congress will take up another economic rescue bill in July, and Trump wants checks included because he thinks it will help his reelection campaign.

Seattle will shut down the cop-free autonomous zone. After two nighttime shootings and other violence, the mayor says police will return to the Capitol Hill neighbourhood.

COVID-19 cases are spiking across the South and West. New cases are up 30% in the past two weeks, even as cases try to roll back reopening and require masking. Elsewhere, Saudi Arabia limited the Hajj to 1,000 pilgrims.

The European Union may block visitors from the US when its borders reopen on July 1. According to the New York Times, European leaders are prepared to block non-essential American visitors because the US has failed to contain the coronavirus pandemic. 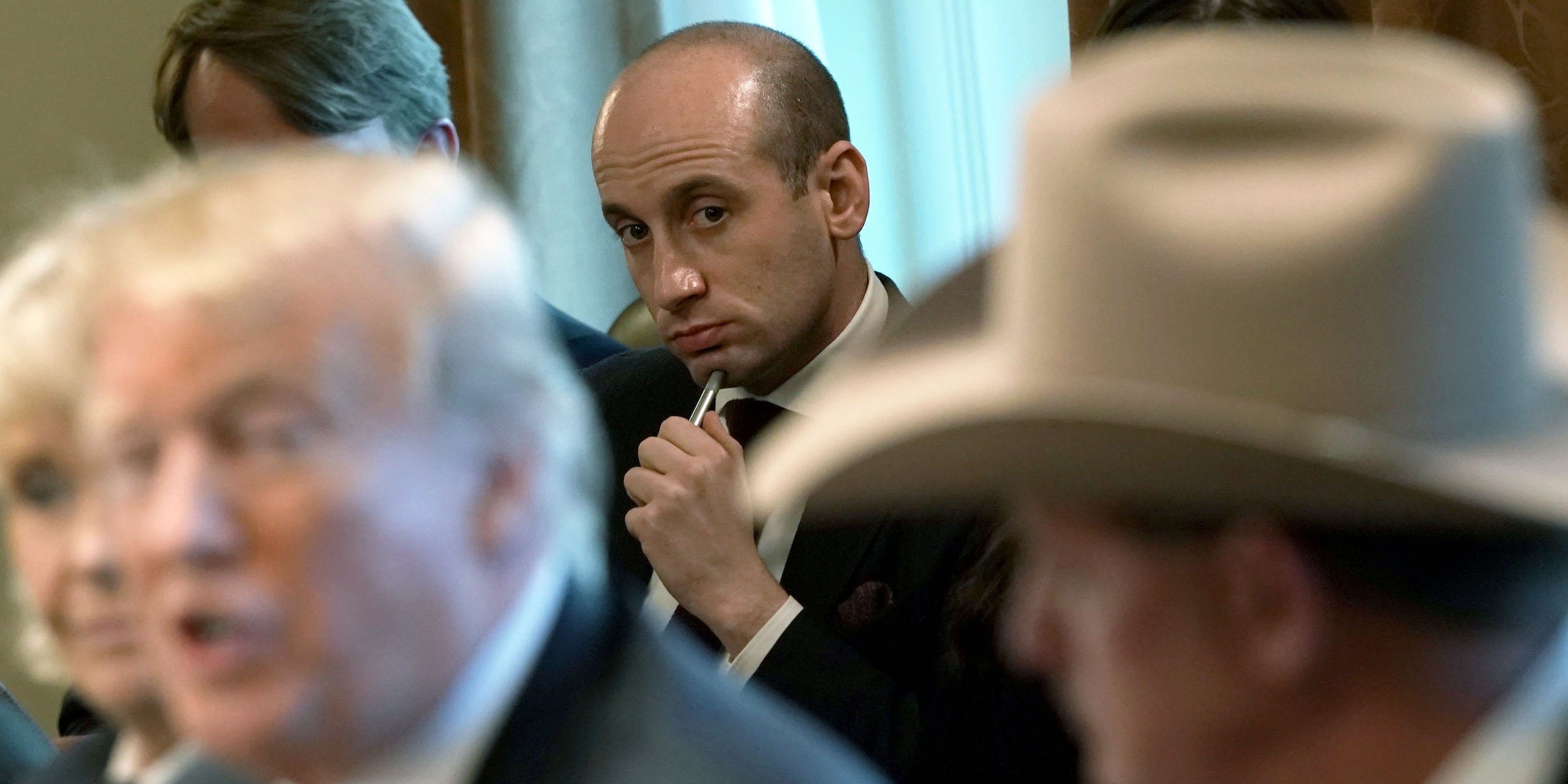 President Trump has extended a suspension of immigration work visas through the end of the year, The suspension includes H1-B visas for highly skilled technology and science workers that the US tech industry depends on.

The administration justified the move by pointing to today’s extreme US unemployment and saying the suspension would prevent immigrants from taking jobs that would otherwise go to Americans. But the move is also in keeping with Trump’s desire to reduce all immigration, not just illegal immigration and asylum.

The idea that reducing immigration preserves jobs for Americans may sound reasonable, but it’s wrong. The US economy does not have a finite and fixed number of jobs. If it did, we would have run out of jobs centuries ago. Instead, the US job market continually expands as the population grows. Like Americans, immigrants who work and live in the United States spend the money they earn. And the money they spend, combined with ever-increasing productivity, creates more jobs.

H1-B visas, in particular, are big job-creators. Studies suggest that the economic contribution from each H1-B immigrant creates another 2 to 5 jobs for Americans. An estimated 30% of the US science and tech workforce was born outside the country. More than 40% of Fortune 500 companies were started by immigrants and their children.

America was built by immigrants, and immigration helps keep America’s economy the largest and most innovative in the world. Reducing immigration, especially skilled immigration, won’t “protect” jobs for Americans. It will reduce the number of jobs that the US economy creates. It will also make the US less competitive, as ambitious, skilled people who weren’t born here decide to build their companies in other countries.

Why is the Trump White House falling apart now? Why not six months ago?

The Trump White House, never exactly a well oiled machine, has been belching black smoke all week – every statement ill-planned, every venture half-baked.

Peter Navarro announced that the China trade deal was “over,” spinning markets into confusion, then recanted.

President Trump bragged about slowing down coronavirus testing – essentially confirming an accusation made by critics. An agitated White House said he was joking. The Vice President said he was making an offhand remark. Then the President rejected both excuses, and said he meant it.

Attorney General Bill Barr tried to axe Manhattan US Attorney Geoffrey Berman and replace him with a crony, was unprepared when Berman refused to leave, had to drag the President into the mess, and then ended up with a legendarily incorruptible prosecutor taking Berman’s place.

Half the administration is preparing for a second wave; half is saying the virus is over.

And of course the Tulsa rally turned into Trump’s very own Fyre Festival.

After three and a half years, none of these incidents of incompetence surprises. Trump is ruled by caprice. Plus he has chopped through staff so relentlessly that his White House is down to the D students. Still, this week marks a new low, and perhaps a fundamental change in the administration.

When a system of the body or brain has been worn down by age, stress, and fatigue, it often suddenly collapses. The term for this is decompensation. A previously functioning system just falls apart, no longer able to handle all the stressors it was previously able to compensate for (Hence, “decompensation”).

For years, the Trump administration has compensated brilliantly – more brilliantly than its critics expected. When threatened, Trump distracted with chaos. Or the good economy mollified people. Or conservative allies protected him with excuses.

But the last few weeks have introduced too many stressors: virus, recession, mass protests, falling poll numbers, Trump’s obsession with reelection. Not even this president can withstand it. The system has broken. Decompensation has begun. – DP


If you’re enjoying this story, sign up now for the Insider Today newsletter to receive more of these insights from Henry Blodget and David Plotz

The area, encompassing about six square blocks, has been operating under its own authority, with some likening it to a cross between Occupy Wall Street and a festival. Protesters have monitored the perimeters, and very few agents of the city have been allowed to enter.

Seattle authorities had been tolerant, even supportive, of the protests and the occupation of public space. Last week the mayor’s office issued a statement saying the city “is committed to maintaining space for community to come together, protest and exercise their first amendment rights.”

But after three shootings this weekend in the CHOP area – one fatal – Mayor Jenny Durkan said Monday that “It’s time for people to go home.” It’s unclear whether the shootings had anything to do with the protests or were just part of the reality of inner-city life in the heavily-armed United States.

Rather than emulate the harsh overnight crackdowns on Occupy encampments that effectively ended that movement in 2011, Durkan says she wants to phase out the CHOP area by encouraging people to leave at night, which the CHOP organisers have also been encouraging so that the area stops “being a chaotic, immobile zone” overnight.

This experiment in anarchic community-building was not built to last. This is not to lay blame on CHOP’s organisers and protesters, but violence was always the most likely way the city’s tolerance for a cop-free zone would end.

Polls show the public is firmly behind the protests against racism and police brutality, but they’re not ready to abolish police, nor abandon the rule of law in chunks of their cities. –Anthony Fisher

Still CHOP should be an inspiration for other protests and other experiments.

Well, Anthony Fisher, I can’t say that I’m surprised that Seattle police are returning to CHOP after a spate of violence. Utopias never last as long as you hope. But it’s a shame.

Maybe a police-free zone filled with armed residents wasn’t destined to end well. But given the crisis of confidence in policing, we could use lots more experiments like CHOP. Could a city set up a carless-precinct, where cops only walk? Or a precinct with just nighttime patrols? Or one where the cops all live within precinct boundaries? CHOP may have failed as an experiment in law enforcement, but may 100 other experiments flourish! – DP

There’s so much news today, but don’t miss this. It was the grimmest story from the fall of Communism: thousands of Romanian babies chucked into vicious orphanages, neglected, untouched, unloved. The Atlantic’s Melissa Fay Greene tracks down some these poor children, 30 years on, to find out what happened to them, and chronicles the life of one extraordinary boy, now the 39-year-old manager of a KFC in Colorado. The article is both hopeful and unbearably sad. – DP 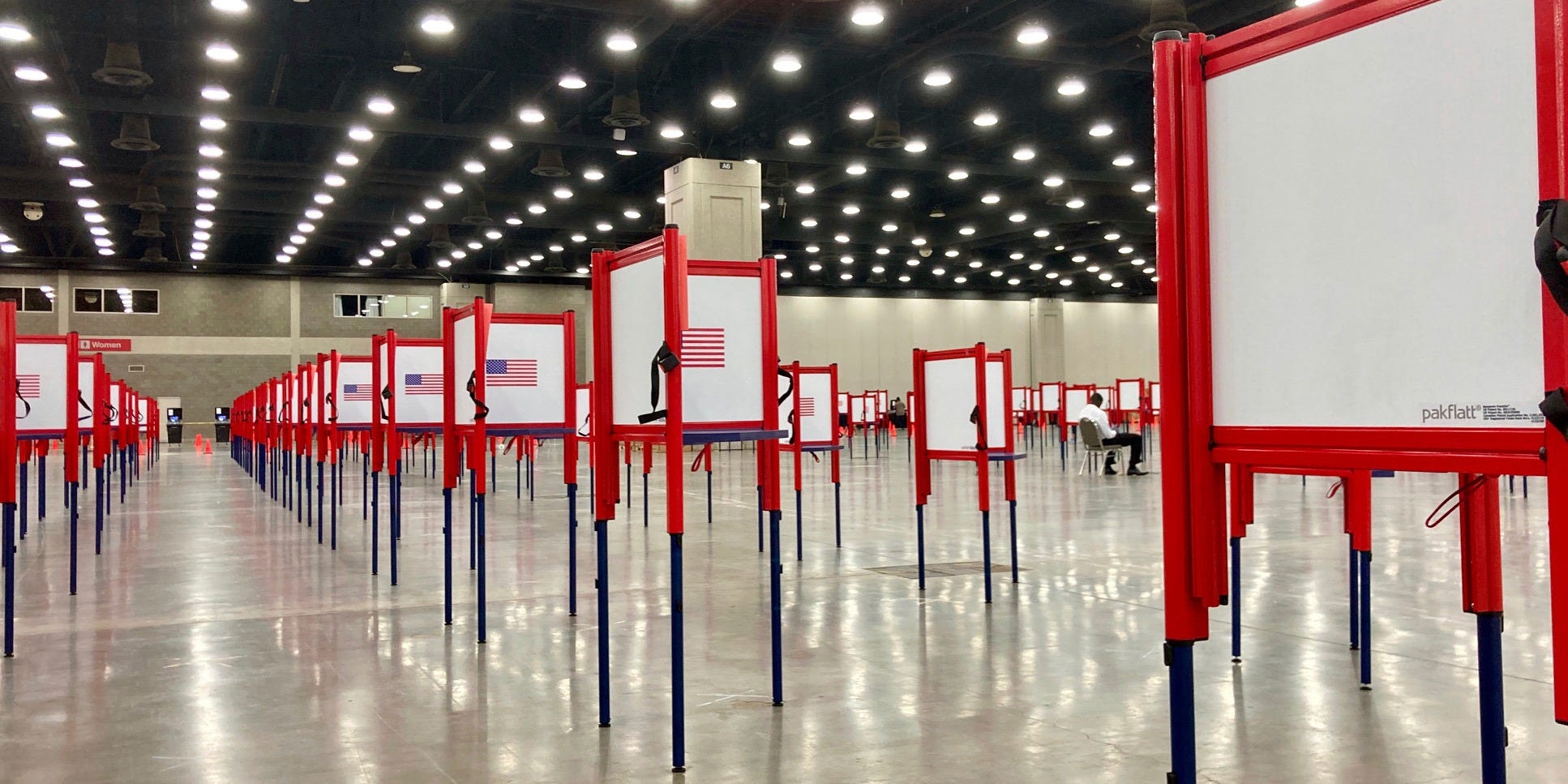 Eyes open for voting problems in Kentucky and New York. Both states are holding primaries today, and Kentucky was only able to open 200 polling stations. It used to have 3,700. Voting rights activists are wondering if easier absentee voting, early voting, and vote-by-mail will prevent an election day fiasco. iPhone upgrades, its own chips for Macs, handwashing detection for the Apple Watch. Here’s everything Apple announced at its biggest annual event.

How did $US2 billion go missing from Wirecard?An expert in forensic accounting tries to explain what might have happened at the fintech firm.

Tina Fey pulled episodes of30 Rockthat used blackface from Amazon Prime and Hulu. “I understand now that ‘intent’ is not a free pass for white people to use these images. I apologise for pain they have caused,” Fey said.

Look inside one of the weirdest houses in America. The “Invisible House” in Joshua Tree looks a skyscraper on its side; it’s covered in mirrors; and you can rent it for $US5,000 a day. 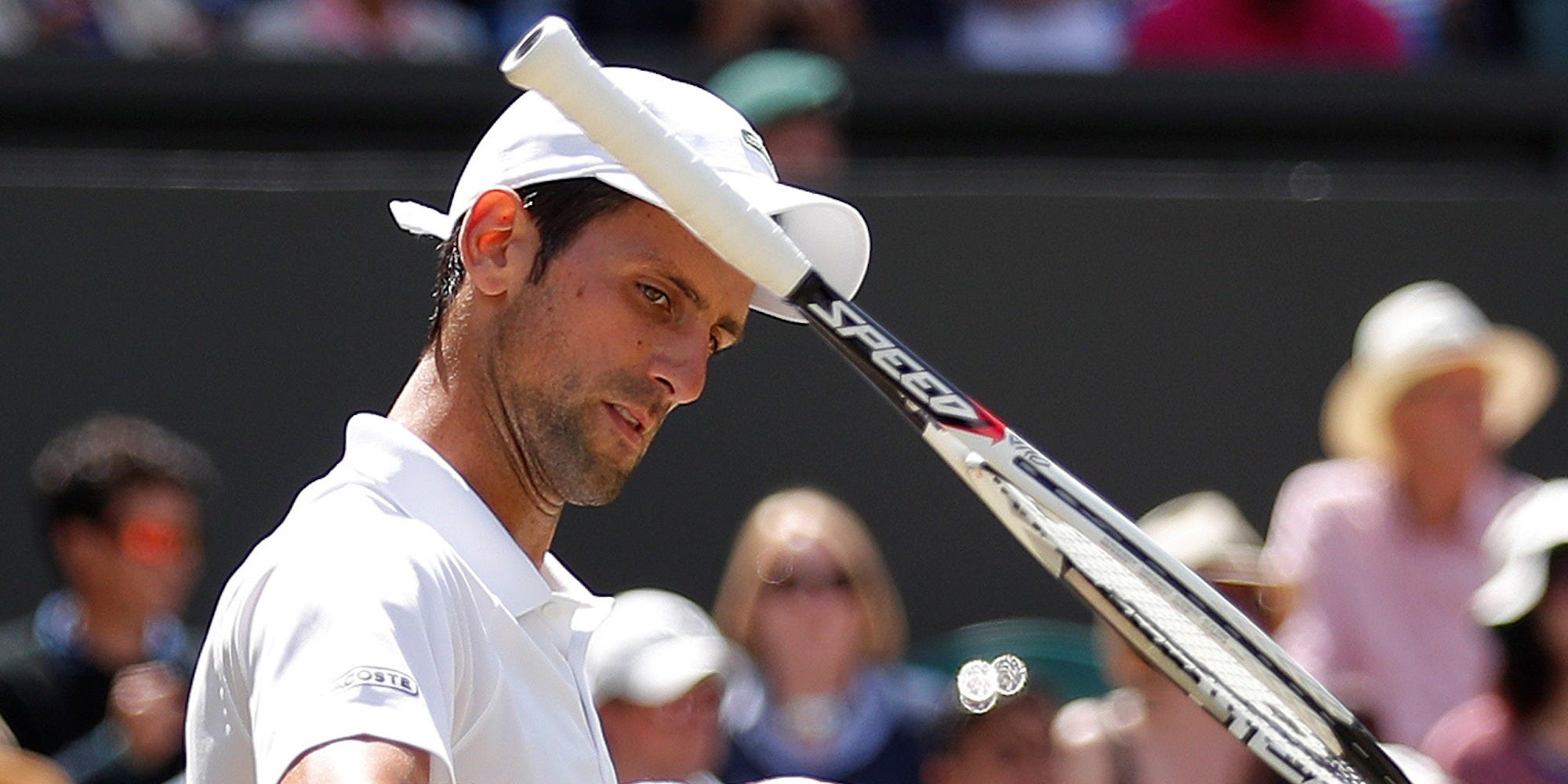 UK covered up evidence of Russia’s “likely hold” on Trump, says ex-spy Steele. Author of the famous “dossier” says British officials suppressed his evidence of Trump’s ties to Putin when he presented them before the 2016 election.

Novak Djokovic tests positive for coronavirus. Just a few days ago, the tennis superstar had been partying topless in a Serbian nightclub.

“Everyone should be worried.” Top White House economic adviser Kevin Hassett leaves the Trump administration, delivers ominous warning about the post-pandemic economy on the way out the door.