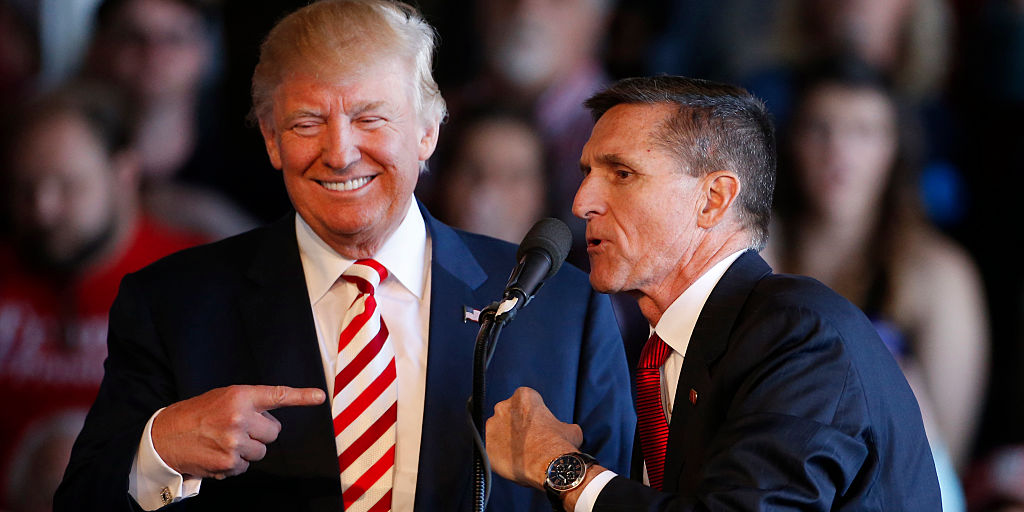 President Donald Trump tweeted on Sunday that he is “strongly considering” pardoning his former national security adviser, Michael Flynn, who pleaded guilty to lying to the FBI.

“So now it is reported that, after destroying his life & the life of his wonderful family (and many others also), the FBI, working in conjunction with the Justice Department, has ‘lost’ the records of General Michael Flynn,” Trump tweeted. “How convenient. I am strongly considering a Full Pardon!”

Flynn pleaded guilty in December 2017 to one count of lying to investigators as part of the FBI’s investigation into Russian interference in the 2016 US election.

The former national security adviser’s attorney, Sidney Powell, accused the FBI of manipulating official records of Flynn’s January 2017 FBI interview in which he misled investigators. There is no evidence to date to support these claims, and the Justice Department pushed back on Powell’s accusations in a separate filing last year.

Moreover, Powell’s allegations were made over a month ago, and it’s unclear why the president raised the issue on Sunday.

Trump was also sharply criticised for tweeting about Flynn as the US and the rest of the world continue grappling with the rapid spread of the novel coronavirus, which causes a potentially deadly disease known as COVID-19.

The World Health Organisation declared the coronavirus a pandemic on Wednesday. As of Sunday afternoon, more than 156,000 people, globally, have been infected with the virus and 5,833 have died.

In the US as of Sunday, 2,815 people in 49 states, Washington, DC, and Puerto Rico have tested positive and 59 have dued.

Make no mistake, the president sees a national emergency in which Americans are afraid for their lives as an opportunity for him to get away with egregious constitutional abuse. https://t.co/RQfM96G8rq

"Now it is reported"?

There hasn't been a filing of substance on the issues in a month, literally.

The filings were all reported on then.

So, is the President just hearing about some of Flynn's attorney's accusations today or is it convenient for him to tweet about it now? https://t.co/p8tYeuknBk

It is very strange to watch the United States go through a potentially life-changing pandemic without a president https://t.co/mti58Z4lMt

Flynn initially cooperated with the FBI after pleading guilty and prosecutors praised the former national security adviser for supplying them with useful information related to several ongoing criminal investigations in addition to the Russia probe.

But Flynn later decided to take a more combative stance, firing his entire defence team and replacing it with Powell, who often spouts conspiracies and accuses the Justice Department and FBI of running a “deep-state” plot against Flynn and Trump. Since taking over as Flynn’s defence lawyer, Powell has worked overtime to try to get his case dismissed.

In January, the former national security adviser filed a motion to officially withdraw his guilty plea in the Russia investigation, citing “the government’s bad faith, vindictiveness, and breach of the plea agreement.”

Shortly after, the Justice Department reversed its recommendation for Flynn to only receive probation and asked a federal judge to sentence him to up to six months in prison.

They made the request because they claimed Flynn was no longer showing the remorse he once did when they initially made a sentencing recommendation and that he had now taken on a more combative posture.

“Far from accepting the consequences of his unlawful actions, he has sought to blame almost every other person and entity involved in his case, including his former counsel,” prosecutors wrote in a memo to US District Court Judge Emmet Sullivan. “Most blatantly, the defendant now professes his innocence.”