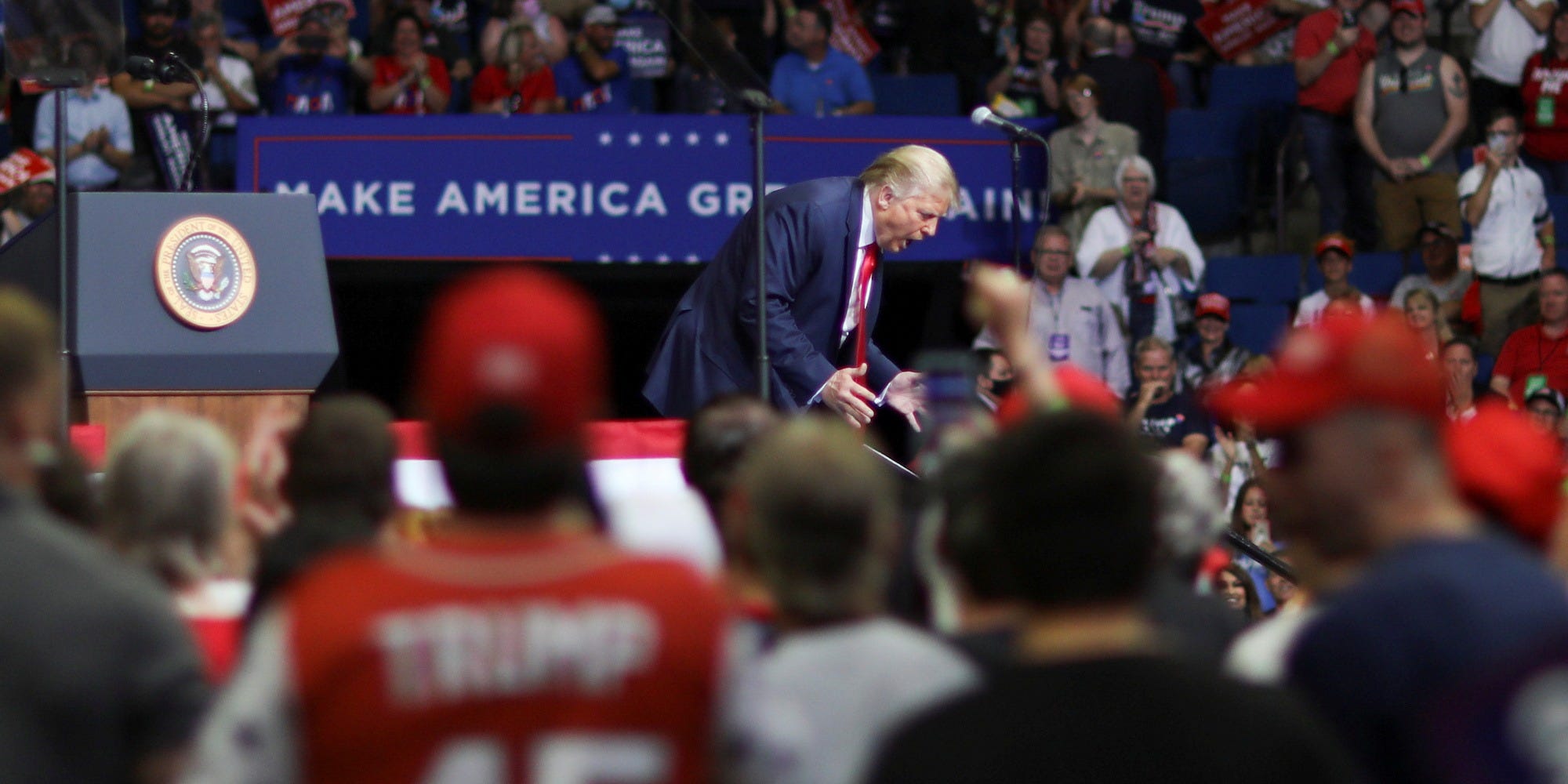 Reuters/Leah MillisUS President Donald Trump re-enacts his walking down a ramp at the end of the recent US Military Academy commencement ceremonies at West Point, during a speech at the BOK Centre in Tulsa, Oklahoma, US, June 20, 2020.

President Donald Trump gave a lengthy explanation during his campaign rally in Tulsa, Oklahoma, on Saturday about his struggle to walk down a ramp the previous weekend, which was captured on video and prompted speculation about his health.

At one point on Saturday, Trump jokingly reenacted his descent down the ramp at West Point, where he had spoken to graduating students.

Trump is reenacting walking down the West Point ramp. pic.twitter.com/46TgmwgkRD

Trump told the Tulsa crowd he had struggled with the ramp in part because he was wearing leather-bottomed shoes and had been worn out from the heat and saluting roughly 600 cadets.

He also said the ramp was slippery, “like an ice skating rink,” and had no handrails for him to grip.

“I said, ‘There’s no way.’ You understand – I just saluted almost 600 times, I just made a big speech, I sat for other speeches, I’m being baked, I’m being baked like a cake,” Trump said. “I said, ‘General, there is no way I can make it down that ramp without falling on my arse, general.'”

He said he started his “journey” down the ramp “inch by inch,” and demonstrated by stumbling across the Tulsa stage, while the audience responded with laughter and applause.

Trump also accused the media of cutting off the end of the clip, in which he claimed he “ran down” the remaining 10 feet of the ramp.

“I looked very handsome,” Trump said. “I wouldn’t want to run down the whole thing, because the fall there would be definitely bad. So I took these little steps, I ran down the last 10.”

Video clips of the incident did not appear to show Trump running down the ramp, but he could be seen taking a few small, quick steps at the bottom.

Trump descended a ramp extremely carefully at the end of his West Point speech today pic.twitter.com/uMG3KyB1V1

Trump also appeared irritated at the speculation about his health, noting that the first lady had told him some viewers believed he had Parkinson’s disease.

He also discussed criticism over how he had struggled to lift a glass of water to his mouth. Trump then lifted a glass of water and drank from it in front of the Tulsa crowd, to cheers and applause.

Trump just demonstrated that he could drink out of a water glass without any problem.

The crowd erupted in cheers of "Four More Years."