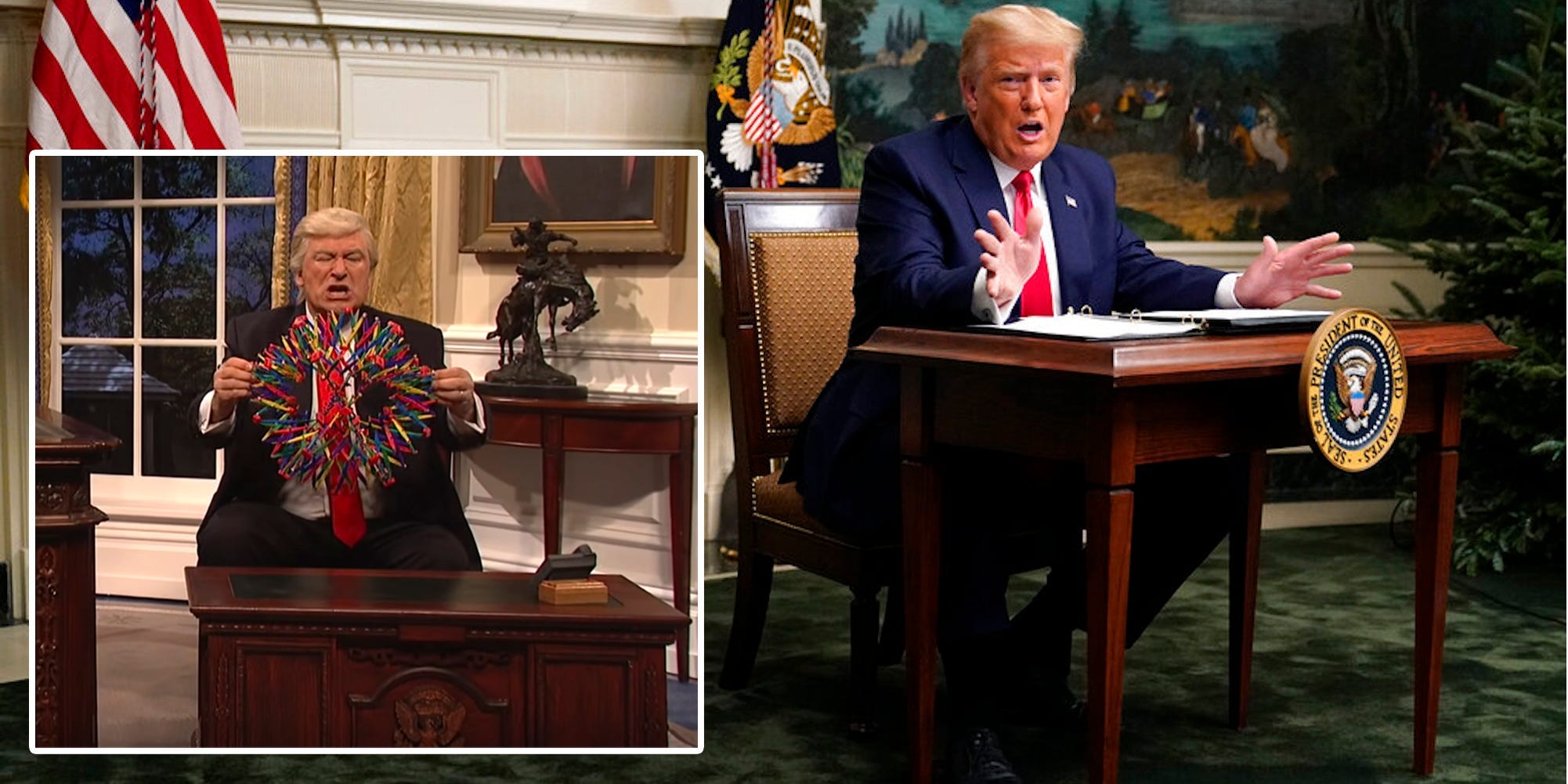 President Donald Trump’s press conference on Thursday was his first since losing the US election â€” but an unusually small piece of furniture stole the show.

After conducting a call with US troops for Thanksgiving, Trump responded to reporters’ questions about the election largely by stirring baseless allegations of electoral fraud, at one point snapping at a reporter.

Many viewers, however, seemed distracted by the tiny desk at which the president was seated. Some likened it to a child’s desk and wondered whether images showing it had been altered (they had not).

#DiaperDon was soon trending on Twitter, and the president was compared to a child banished to a kid’s table on Thanksgiving for throwing a tantrum.

The topic seemed to rile the president, who in a tweet accused the platform of fabricating “totally false ‘Trends’ that have absolutely nothing to do with what is really trending in the world.”

When they sit you at the children’s table for Thanksgiving. #DiaperDon pic.twitter.com/tltMv27Q7l

Trump’s next appearance should be at one of those elementary school chairs that are attached to half a desk https://t.co/OI97JDmHuc

Others noticed uncanny similarities between Thursday’s press conference and a 2017 “Saturday Night Live” sketch that used a tiny desk as a punch line.

In the skit, Alec Baldwin played a Trump who was relegated to a child’s desk to play with a toy while Steve Bannon (then Trump’s influential chief strategist, depicted on “SNL” as the Grim Reaper) worked from the Resolute Desk.

Trump at his mini Resolute Desk reminds me of this old SNL skit ???? pic.twitter.com/2H6vCjiI2W

There is something very odd here. Either ⁦@realDonaldTrump⁩ has grown, or his desk has shrunk. But the proportions look just weird. pic.twitter.com/82H61qrUvM

One Twitter user had an explanation for the desk, noting that it had been used by former presidents for photo ops while signing executive orders.

Its size would help accommodate a massed crowd gathering for photo opportunities, but it looked strange with the president seated alone.

It is not clear why Trump used that desk to take questions from reporters, rather than doing it in one of the White House’s briefing rooms.

Here’s the thing about the small desk Trump is sitting at. It’s like… a bill-signing desk. It’s meant to have a dozen or so people around it. I think it might be small so that more people can cram in for a photo op.

It is not intended to be a desk you sit at alone. pic.twitter.com/LOc0M1bImE