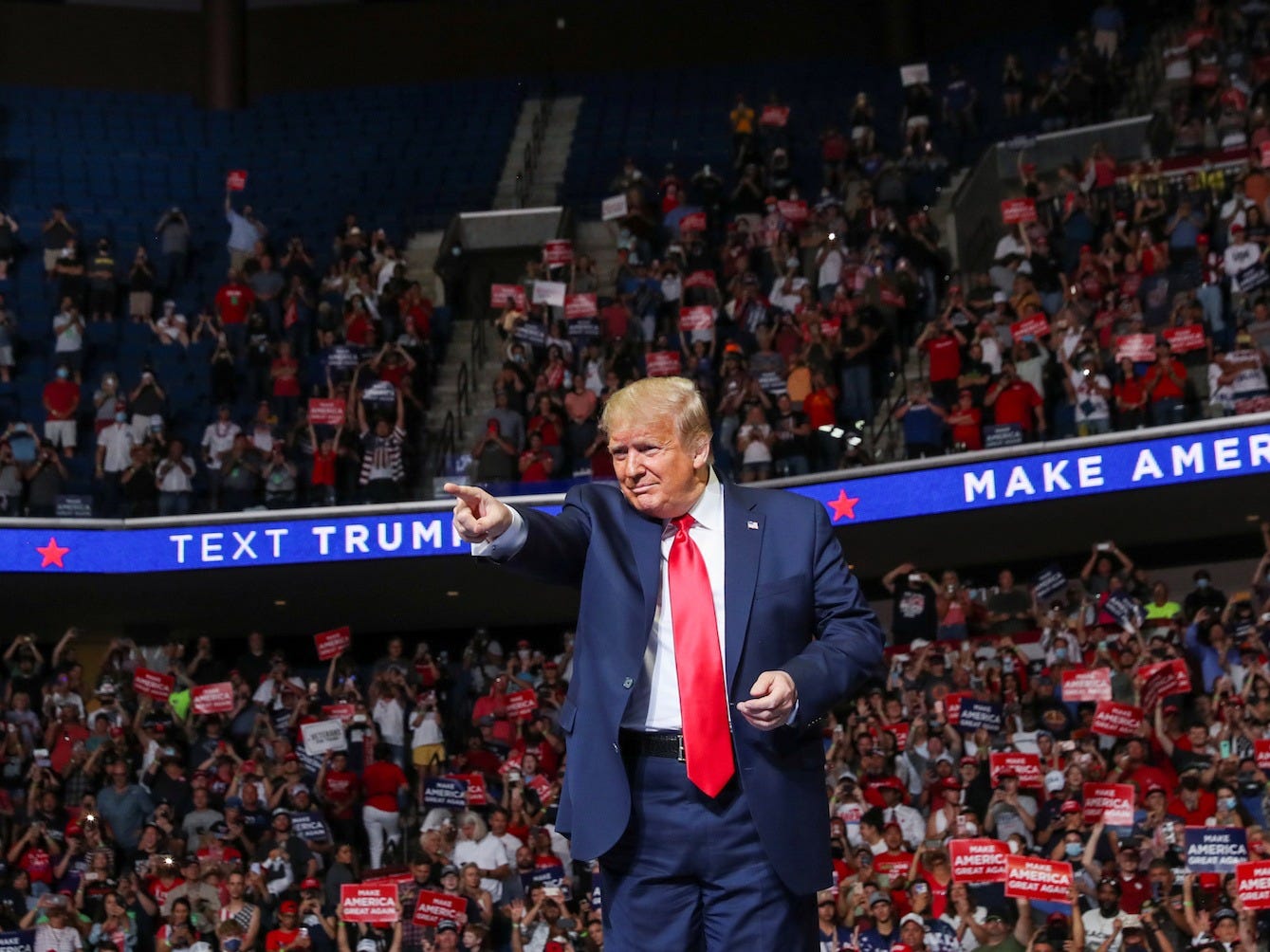 Leah Millis/ReutersPresident Donald Trump points at the crowd as he enters his first re-election campaign rally at the BOK Centre in Tulsa, Oklahoma, on June 20, 2020.

Donald Trump’s reelection campaign is claiming that 4 million viewers tuned in online to watch the president’s rally in Tulsa, Oklahoma.

“President Trump’s rally in Tulsa attracted over 4 million unique viewers across all of the campaign’s digital media channels,”Trump 2020 Communications Director Tim Murtaugh said in a statement. “The live-streamed pre-rally shows drew an audience of more than 2.5 million unique viewers by themselves. These numbers don’t even include television viewers.”

Murtaugh’s statement comes after the in-person rally drew a smaller-than-expected crowd. Trump’s team had expected a massive crowd to come Saturday night, especially since it was his first rally since the pandemic shut down the country in March.

However, the anticipated large crowd never came to fruition.

Inside the BOK Centre, where the rally was held, thousands of seats were left empty. At full capacity, the arena can hold over 19,000 people, but the Tulsa fire department reported that just under 6,200 attended the event.

The Trump campaign initially said it received over 1 million ticket requests for the event, which was revealed to be the work of TikTok users and K-Pop stans, who purposely requested tickets with the intention of never showing up.

The campaign even set up an overflow area, designated for those who could not fit inside the initial theatre, though it had to be scrapped due to low audience turn out, the Washington Post reported.

As noted by the Washington Post, Murtaugh and Trump’s campaign manager, Brad Parscale, blamed protesters, and the media for low audience turnout, while Trump referred to those protesting outside his rally as “thugs.”

Trump’s campaign held the rally last night, despite the ongoing threat of the coronavirus. NBC News’s Kristen Welker reported that Tulsa County saw a 100% spike in cases the week leading up to Trump’s rally, and the day of, reported 136 new cases as death’s in the state continue to rise.

Shortly before the event began, it was revealed that six of his staffers tested positive for the virus. At the rally, Business Insider’s Sophia Ankel reported that Trump ordered the “slow down” of coronavirus testing, calling it a “double-edged sword” because more testing leads to finding more cases.