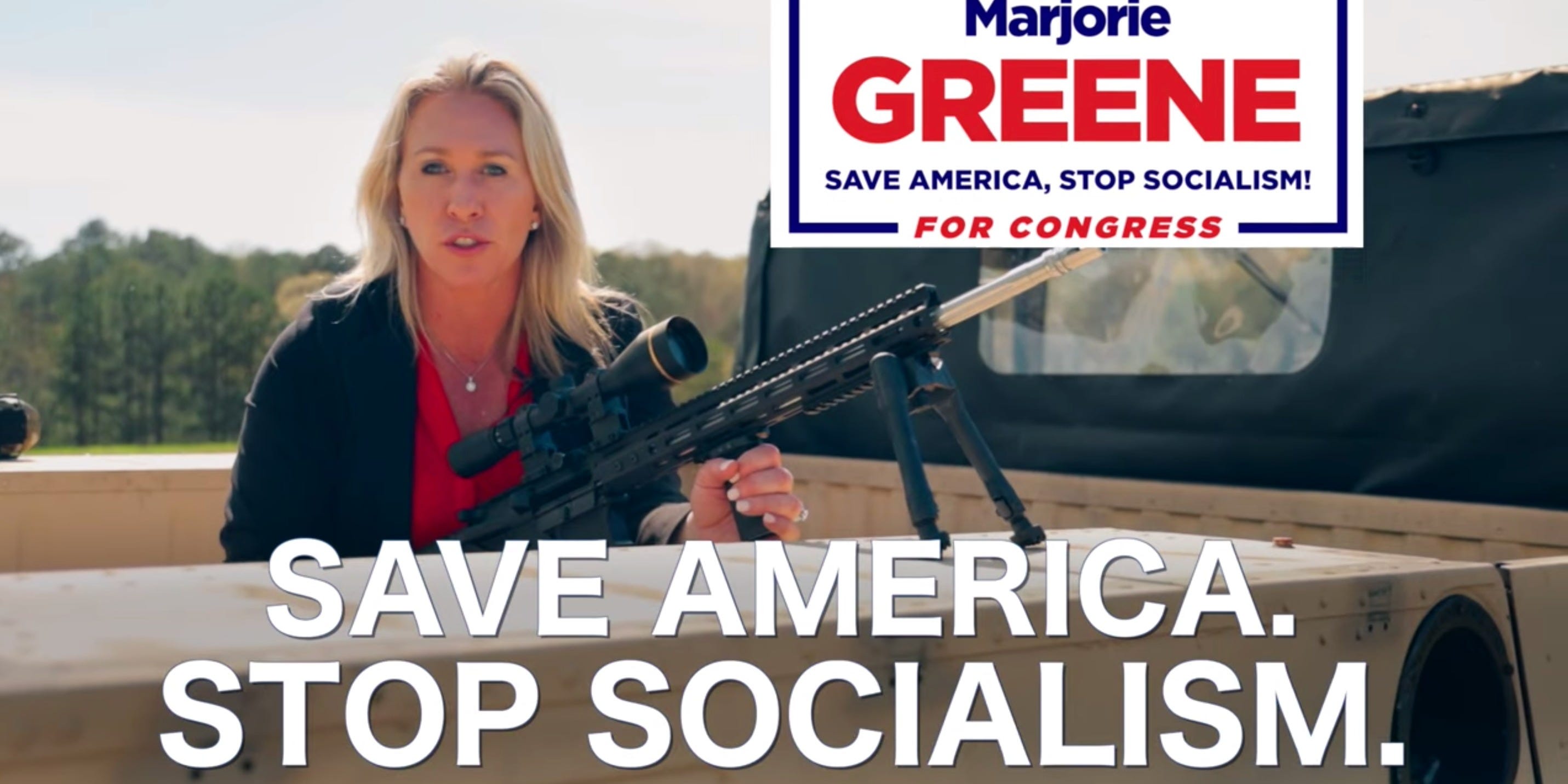 Greene, a construction company owner who has largely self-financed her run for office, is an outspoken supporter of President Donald Trump and has built her political brand over the last few years on anti-immigrant, Islamophobic, and anti-trans positions. She’s also trafficked in a host of alt-right conspiracies.

Because no candidate in the crowded field won a majority of the vote, she will face fellow Republican John Cowan, a neurosurgeon and toy store owner, in the district’s August runoff. As of the afternoon of June 10, Greene had won 41% of the vote to Cowan’s 19%, according to Decision Desk HQ.

She faced criticism after posing for photos with the well-known former Ku Klux Klan leader, Chester Doles, who has expressed support for her bid.

“Our friend Marjorie Greene is running for Congress. She’s part of the Q movement,” Doles wrote in a March social media post. “Good friend to have.”

Greene’s campaign told the Atlanta Journal-Constitution that questions about the candidate’s association with Doles were “silly and the same type of sleazy attacks the Fake News Media levels against President Trump.”

And Greene has repeatedly posted online in support of the pro-Trump QAnon conspiracy.

Greene is just the latest in a long line of Trump supporters to subscribe to the QAnon conspiracy theory.

QAnon centres around an anonymous online individual known as “Q,” who claims to have top-secret security clearance. The Daily Beast reported that “Q” first surfaced in October 2017 on the fringe website 4chan, before moving over to 8chan.

Broadly, the conspiracy theory claims that the world is run by a Satanic cabal of elites intent on bringing down the Trump presidency.

It alleges, among other things, that the former special counsel Robert Mueller was appointed to investigate Hillary Clinton, Barack Obama, and other top Democrats who opposed Trump; that the so-called American “deep state” tried to shoot down Air Force One before Trump’s summit in North Korea last year.

Followers believe there will be a “Great Awakening” before a “storm” – an idea derived from the president’s unclear reference in 2017 to “the calm before the storm” – during which Trump will conquer elites, globalists, and the deep state. Ultimately, they believe, Trump is going to fix everything by sending Obama, Clinton, and others to Guantanamo Bay.

There is no evidence that any aspect of the conspiracy theory is true, and it has been debunked by multiple media outlets. Still, it’s not unusual to spot multiple signs promoting QAnon at Trump rallies.

Last year, the Trump campaign drew backlash when it released an ad that featured multiple supporters holding QAnon signs, weeks after the FBI warned that conspiracy theories are a domestic terrorism threat.

Folks, a QAnon supporter is probably going to Congress: Marjorie Taylor Greene, who extensively supports QAnon, came in 1st in her primary yesterday by a wide margin & will go a runoff in August. She's likely favored in the runoff & then in November in this very GOP district. pic.twitter.com/AhLuX2aozV

At a Trump rally in March of last year, dozens of his supporters wore T-shirts emblazoned with the letter “Q,” held signs reading “We are Q,” and shouted support for “Q” while waiting in line in Grand Rapids, Michigan.

From the fringe to mainstream GOP politics

Greene’s success despite her extremist views shows how the QAnon conspiracy – and conspiracy thinking in general – has made its way from the darkest corners of the right-wing fever swamp to mainstream Republican politics.

The House Freedom Fund, a conservative PAC associated with White House chief of staff Mark Meadows, has poured tens of thousands of dollars into Greene’s campaign.

Earlier this week, Facebook removed one of Greene’s campaign ads in which she holds an AR-15 assault rifle and warns antifa to “stay the hell out of northwest Georgia.”

Antifa is a loosely organised far-left movement that holds anti-fascist views and has been accused by Trump and other Republicans of stoking riots in police brutality protests taking place across the country following the Memorial Day death of George Floyd. Despite the allegations, a closer review of court records, media reports, and social media activity shows little evidence of a coordinated or organised effort by antifa to infiltrate the demonstrations.

Facebook said in a statement that Greene’s ad violated its policy against inciting violence because it “advocates the use of deadly weapons against a clearly defined group of people.”

In an interview with Fox News, Greene accused Facebook of “defending terrorists.” The candidate has spent more than $US106,000 on Facebook ads – over double what the next-highest spender in the race allocated to digital ads, Open Secrets reported on Monday.