Following Trump's YouTube ban, it is feared his supporters are migrating to a 'Wild West' of video-sharing, mingling with far-right and neo-Nazis terror groups 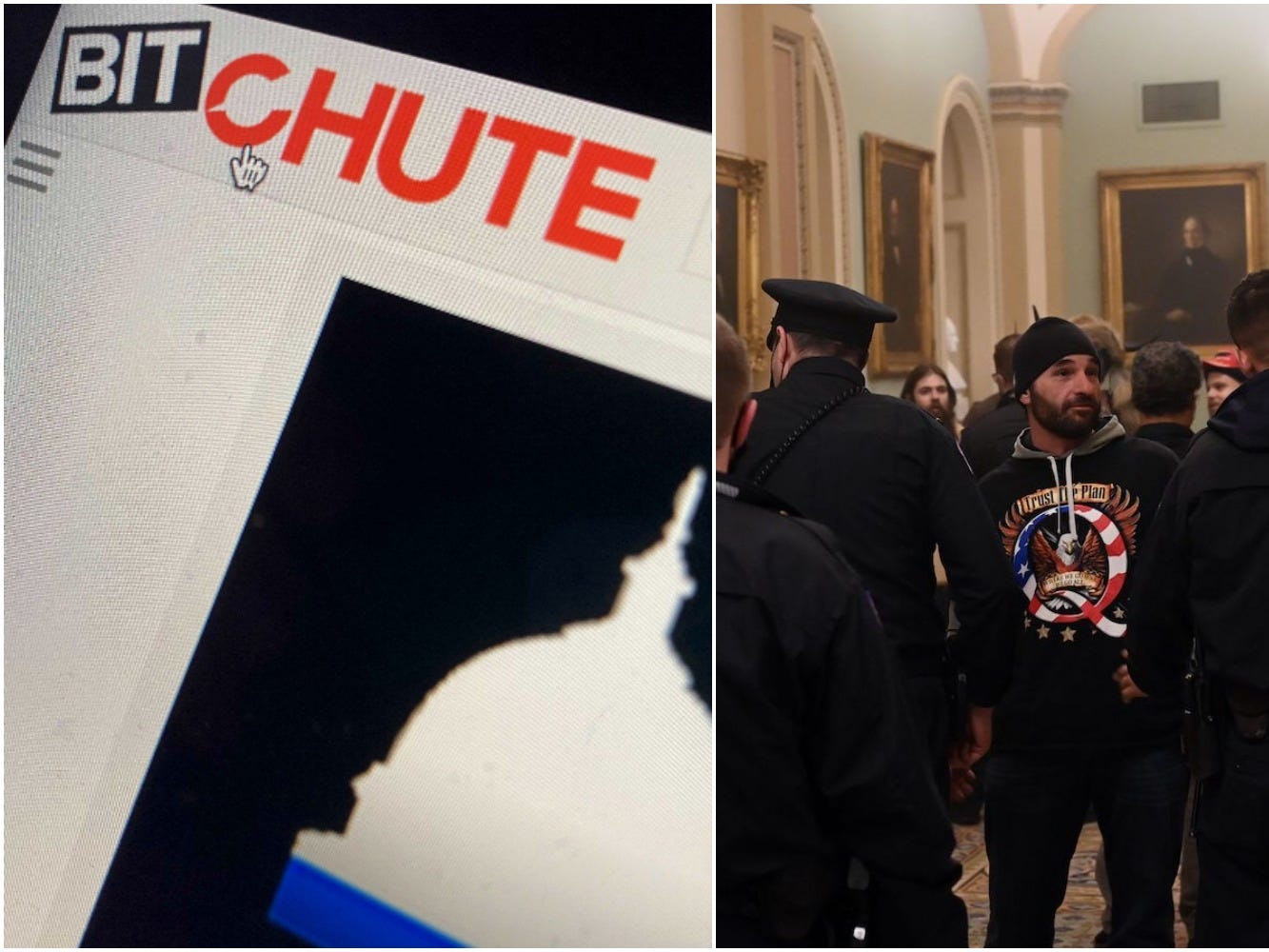 APIt is feared that Trump’s supporters are migrating to websites such as BitChube.

Many of President Donald Trump’s supporters have been searching for a new home online ever since major social media platforms banished the president and cracked down on violent content.

With Parler unavailable and YouTube inhospitable to them, a growing number are choosing to migrate to smaller ‘free-speech’ platforms that do little to moderate hateful and sometimes criminal videos.

Why Trump’s most extreme followers are migrating to other websites

The search for a new digital home was accelerated by the events of last week’s siege of the US Capitol building when social media giants responded to the chaos and violence by suspending President Donald Trump’s accounts.

In solidarity, many of his supporters announced that they too, would leave these platforms. #GoodbyeTwitter, for example, was a trending topic on the platform on the day of his suspension.

Free speech is invaluable. We are a global movement, we the conservatives are not going anywhere.

We must fight globally for liberty, against tyranny

We won't let this happen

Might as well change your logo you commie trash censorship media. All that will be "left" is the obnoxious SJW's. #goodbyetwitter #censorship #TrumpRally pic.twitter.com/Th4w8IoC6A

Some of the president’s supporters, pre-empting Trump’s possible appearance on the app, shared their plans to move to Parler.

Parler reported a surge in downloads, indicating that the app was the preferred destination for those on the right choosing to shun major social media platforms.

This may be the last time you see me or any real patriots on this app.

If so, it’s been a nice ride. Find me on Parler.

Parler’s growth, however, was short-lived. Amazon kicked the app off its web-hosting servers, forcing the site to go dark.

Then YouTube, the last major platform to remove Trump, announced steps to crack down on content that might incite violence. It removed content that violated the platform’s guidelines and banned Trump from posting new videos for a “minimum” of a week.


Read more:
VCs warn that Twitter and Facebook will face backlash on all fronts from banning Trump: Tech ‘dictatorships’ are over

YouTube’s far-right alternatives are more popular than ever

“The migration to other websites has existed for a while. We’ve seen a lot of content splitting off into smaller channels as a result of previous crackdowns that were happening on YouTube from as early as 2019,” Dr. Andre Oboler â€” CEO of the Online Hate Prevention Institute â€” told Insider.

Last week’s suspensions, however, have sped up the process. “The far-right’s gravitation towards these platforms for has now certainly been accelerated,” Oboler said.

BitChute, a British video hosting website founded in 2017, has drawn in those suspicious of YouTube’s moderation policies for over three years. Recently, however, it has seen a massive spike in interest.

Google TrendsInterest over time in BitChute. A value of 100 represents peak popularity for the website.

BitChute reached its peak popularity in the immediate aftermath of the attempted coup in Washington DC and Trump’s subsequent social media exile.

Google Trends, a tool monitoring search queries, shows that BitChute is currently being searched for more than at any other point in its history.

The peak period was the week of January 10, 2021 â€” immediately following Trump’s ban from Twitter and suspension from YouTube.

“Growth is strong and traffic has doubled this week,” a BitChute spokesperson told Insider.

Hit Google where it hurts and change your browser to DuckDuckGo (private browser) change from YoubTube to Brandnewtube get retweeting and let’s get these control freaks in the pockets ????????

Other video hubs, less well established than BitChute, have also drawn in those looking to view and post content without the fear of censorship.

BrandNewTube, a platform that advertises itself as one which “wouldn’t suppress your opinions,” has seen a boost in recent weeks.

Google TrendsInterest over time in BrandNewTube, where a value of 100 represents peak popularity.

The video-sharing site, launched in May 2020, has seen a peak in popularity since last month, according to Google Trends.

Other websites, such as WorldTruthVideos â€” a site popular with anti-vaxxers and climate change sceptics, have also launched and promoted themselves to the far-right in the past year.

Dr. Ben Horne, assistant professor of Information Studies at the University of Tennessee Knoxville, said: “We’re seeing a bunch of people attempting to create alternative sites to YouTube and seeing which ones stick.”

The platform advertises itself as “a service that they [creators] can use to flourish and express their ideas freely.”

Based on the videos published on the platform, it is evident that BitChute is popular with Trump supporters, members of the far-right, and followers of QAnon.

It hosts several far-right conspiracy theorists who had previously been banished from YouTube, most notably InfoWars’Alex Jones.

InfoWars, infamous for promoting 9/11 conspiracy theories and alleging that Sandy Hook Elementary School’s shooting was a hoax, has over 100,000 subscribers on BitChute. 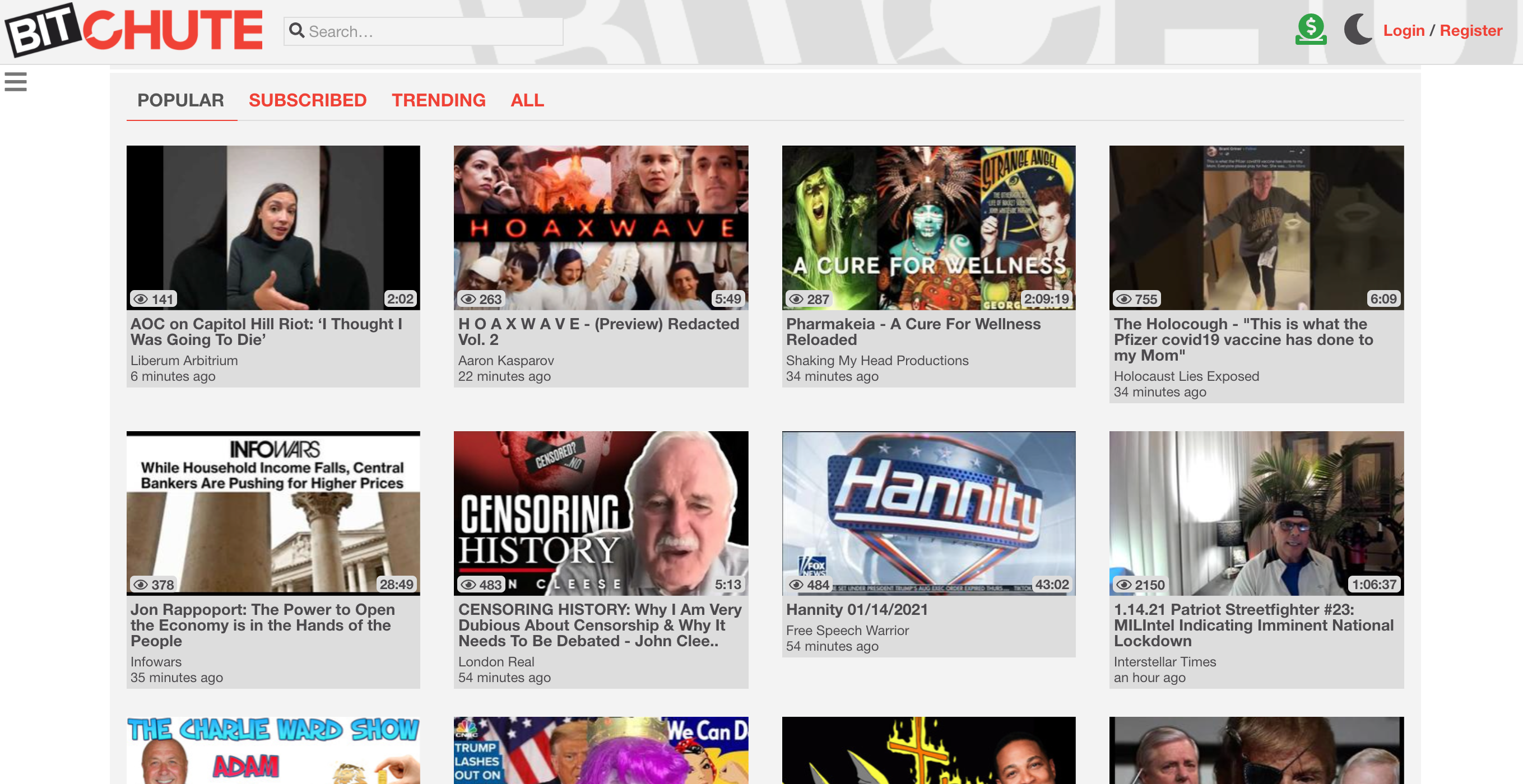 “The content is very extreme and the only videos that get any sort of engagement are very, very extreme,” Dr. Ben Horne told Insider.

A quick search of ‘Holocaust’ on BitChute’s browser reveals thousands of videos falsely alleging that the Holocaust did not happen or was exaggerated. Similarly, ‘Holohoax’ brings up more than 1,500 videos. 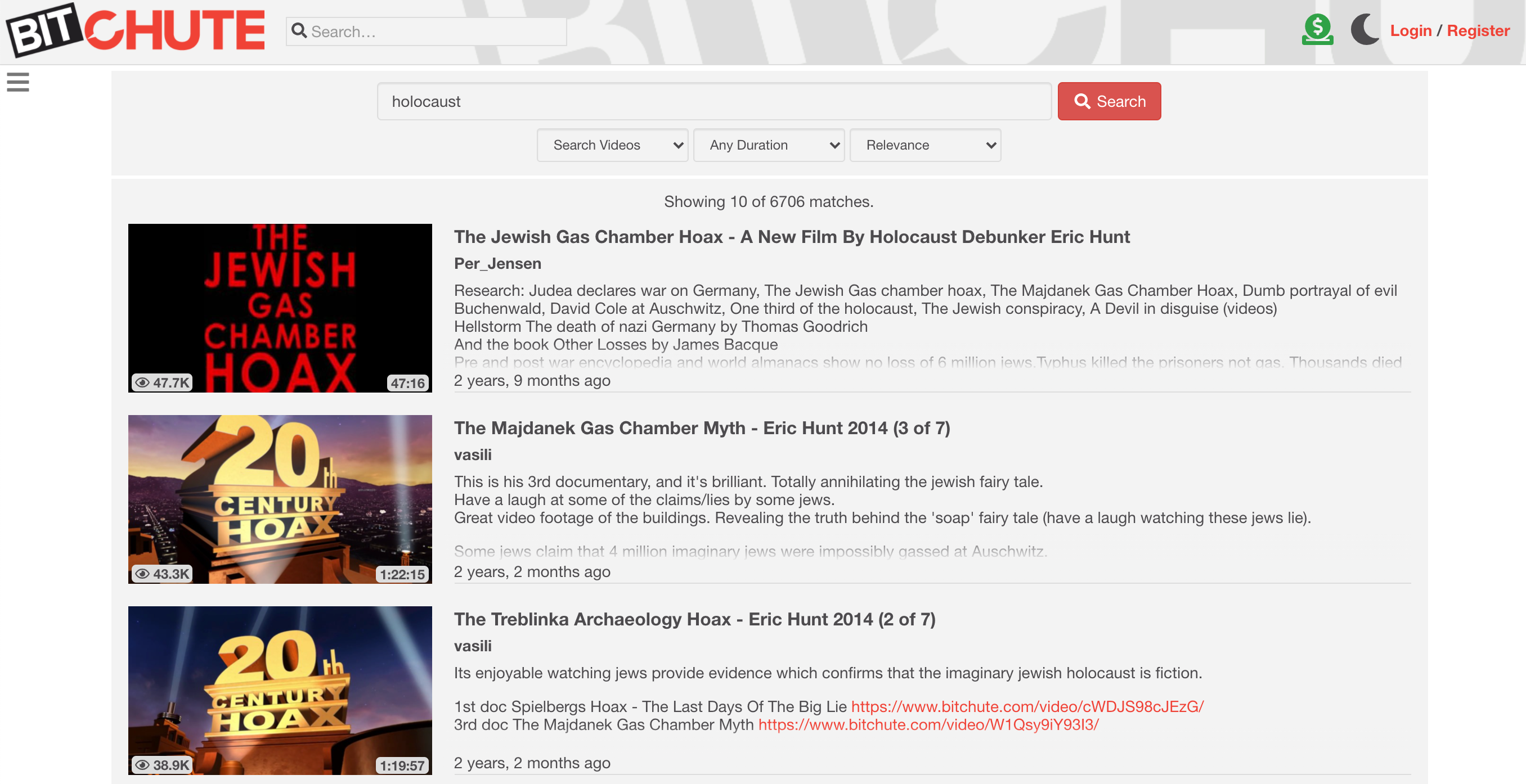 According to a 2020 study by charity Hope Not Hate, 114 videos supporting proscribed terrorist groups on BitChute â€” including 23 videos supporting National Action and 86 videos promoting ISIS â€” were available on the website.

“There are still plenty of videos that are glorifying terrorists and calling for people to do similar things. Atomwaffen and similar groups in Europe use these sites to promote propaganda videos,” the charity’s researcher Patrik Hermansson told Insider.

Dr. Ben Horne said that these videos actively recruit on the website. “We have found very explicit videos of terrorist groups recruiting with encrypted email links urging people to join them,” he said.

Some of the videos are also disturbingly graphic. “The videos we have seen on BitChute include videos of actual terrorist attacks filmed by the terrorists themselves,” Dave Rich of the Community Security Trust (CST) â€” a British charity that combats antisemitism â€” told Insider. 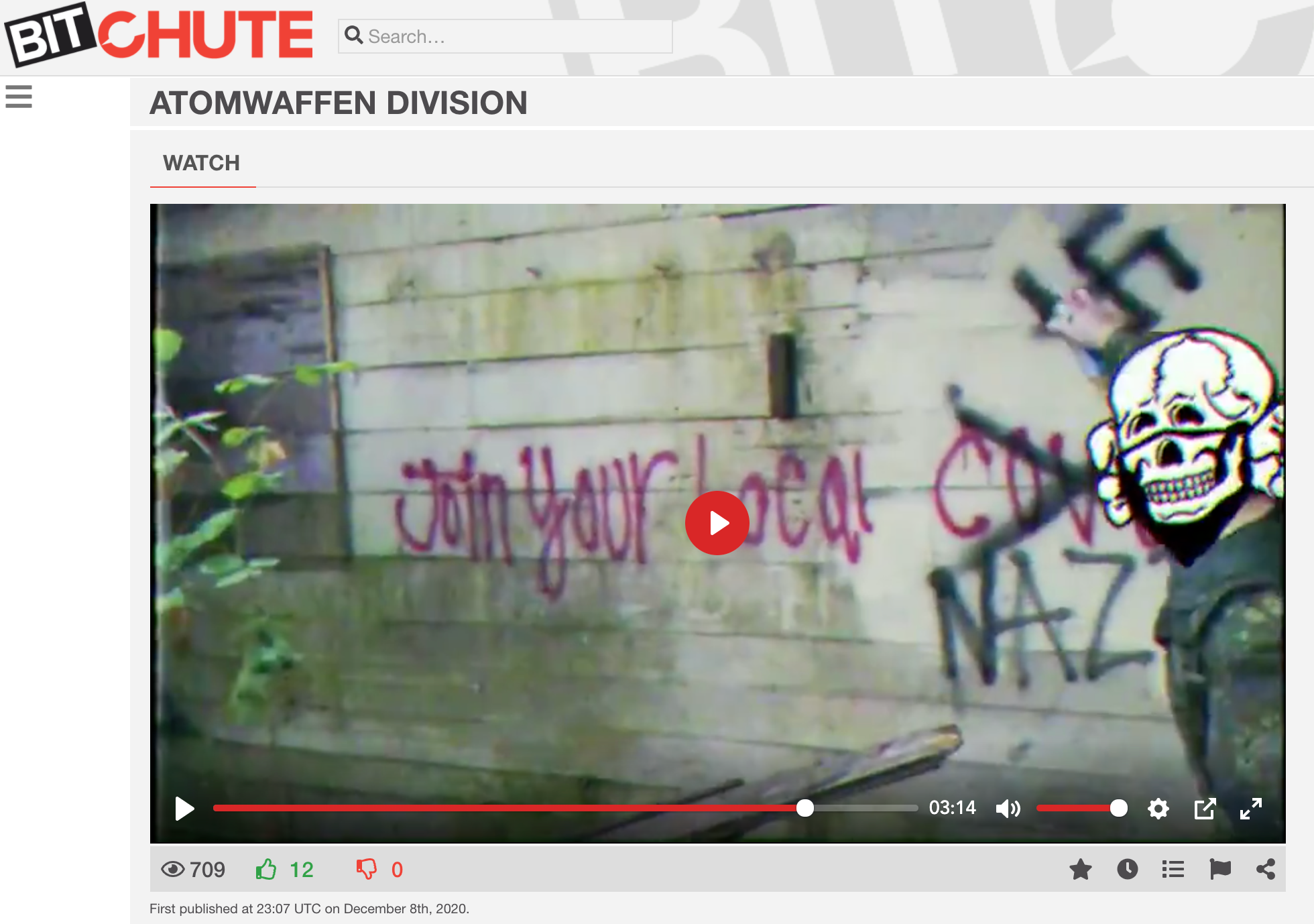 There is very little moderation on BitChute

Despite many of these videos breaching laws in numerous countries, it appears that BitChute is doing little to remove them.

BitChute’s CEO Ray Vahey told Insider: “Our guidelines are intended to prohibit illegal content and unacceptable behaviour that leads to oppression and incitement. We endeavour to enforce our guidelines in a way that is fair, transparent, and does not infringe on the right to freedom of expression or the ability to hold power to account.”

Experts strongly dispute that these guidelines are enforced.


Read more:
MeWe doesn’t want to be the next Parler. But extremist hordes are coming to the social-media site anyway.

Hope Not Hate’s Patrick Hermansson told Insider: “They could argue that they just haven’t seen the dangerous content but, in reality, it is on their front page. They must look at their front page sometimes.”

The CST echoes this view.

Dave Rich, the organisation’s head of policy, said: “It’s a site that is disproportionately used by extremists to post really disgusting, hateful, violent, and racist stuff, and BitChute seems to be doing the bare minimum to discourage or remove this material.”

BrandNewTube is another site that has seen a rise in popularity over the past month.

It is a honeypot for conspiracy theorists claiming the COVID-19 pandemic is orchestrated by a shadowy world government.

The website’s most popular videos are anti-vaxxer films, many proudly advertising that they are “now banned on YouTube and Facebook.” 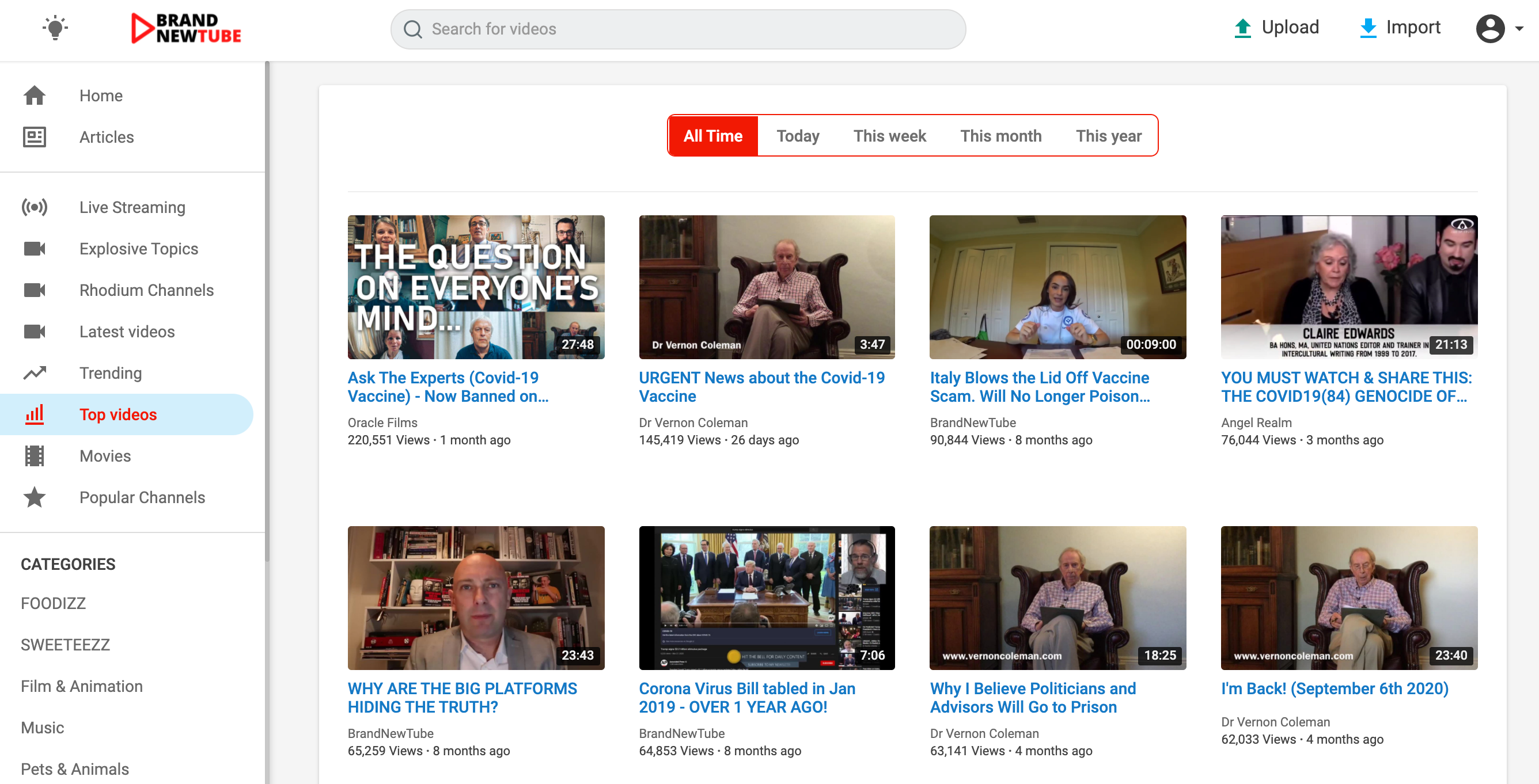 The most popular creator, Dr. Vernon Coleman, shares videos that wrongly suggest that COVID-19 vaccines and national lockdowns are a form of population control and that the coronavirus is not real. 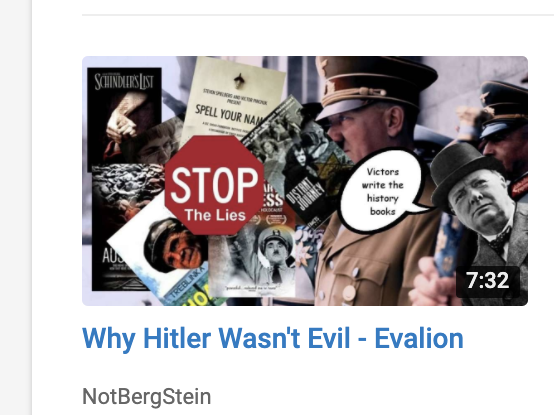 WorldTruthVideos, a new site with a relatively small following, is also a hotbed of conspiracy theories and anti-Black racism. 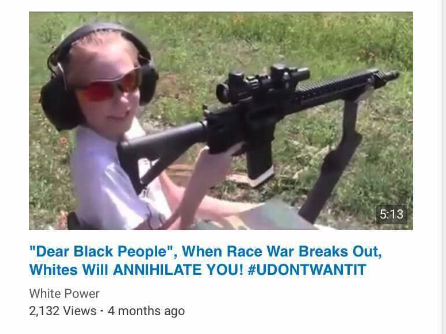 One video, which was published four months ago, threatens to “annihilate” Black people when the “race war” breaks out. The rest of the website is littered with uses of the N-word and images of lynching.

“It is the Wild West on these websites where anything goes,” said Dr. Ben Horne.

Sanctuary for the far-right

Horne told Insider: “There isn’t anything indicating that this isn’t a long-term trend. The biggest barrier to entry is if these platforms have server space.”

Parler’s CEO has said that the app may never go back online after Amazon removed it from its web-hosting service for violating its terms and conditions.

BitChute, however, uses Epik, a web hosting company that is famously hospitable to controversial websites.


Read more:
Parler reportedly spent $US300,000 a month on Amazon’s cloud before it got banned, and it’s a sign that it won’t be so easy for the far-right social app to come back online.

The web hosting company was described as a “safe haven for the extreme right” by Vice magazine. It has historically not responded to reports of illegal activity on its websites, according to WIRED.

Epik’s reputation as a far-right online sanctuary has resulted in Parler joining Epik, according to Newsweek.

The consequences of de-platforming and the rise of ‘splinter’ websites

While some have celebrated the de-platforming of the far-right by Big Tech, the splintering into websites like BitChute, BrandNewTube, and WorldTruthVideos present new challenges.

“Pushing extremists off mainstream platforms decreases the number of people that they can radicalize,” Dr. Andre Oboler told Insider. “But on the other hand, these new splinter websites give their audience an echo chamber where there isn’t any opposition, discussion, or debate.”

He continued: “We need to make sure that these new platforms, who refuse to moderate content that crosses into terrorism, are cut off by their suppliers or held accountable by their relevant governments.”

Oboler then explained why, after the insurrection at the Capitol, this action is needed urgently: “America has woken up to find out that when freedom of speech crosses a line, it has real-world consequences.”