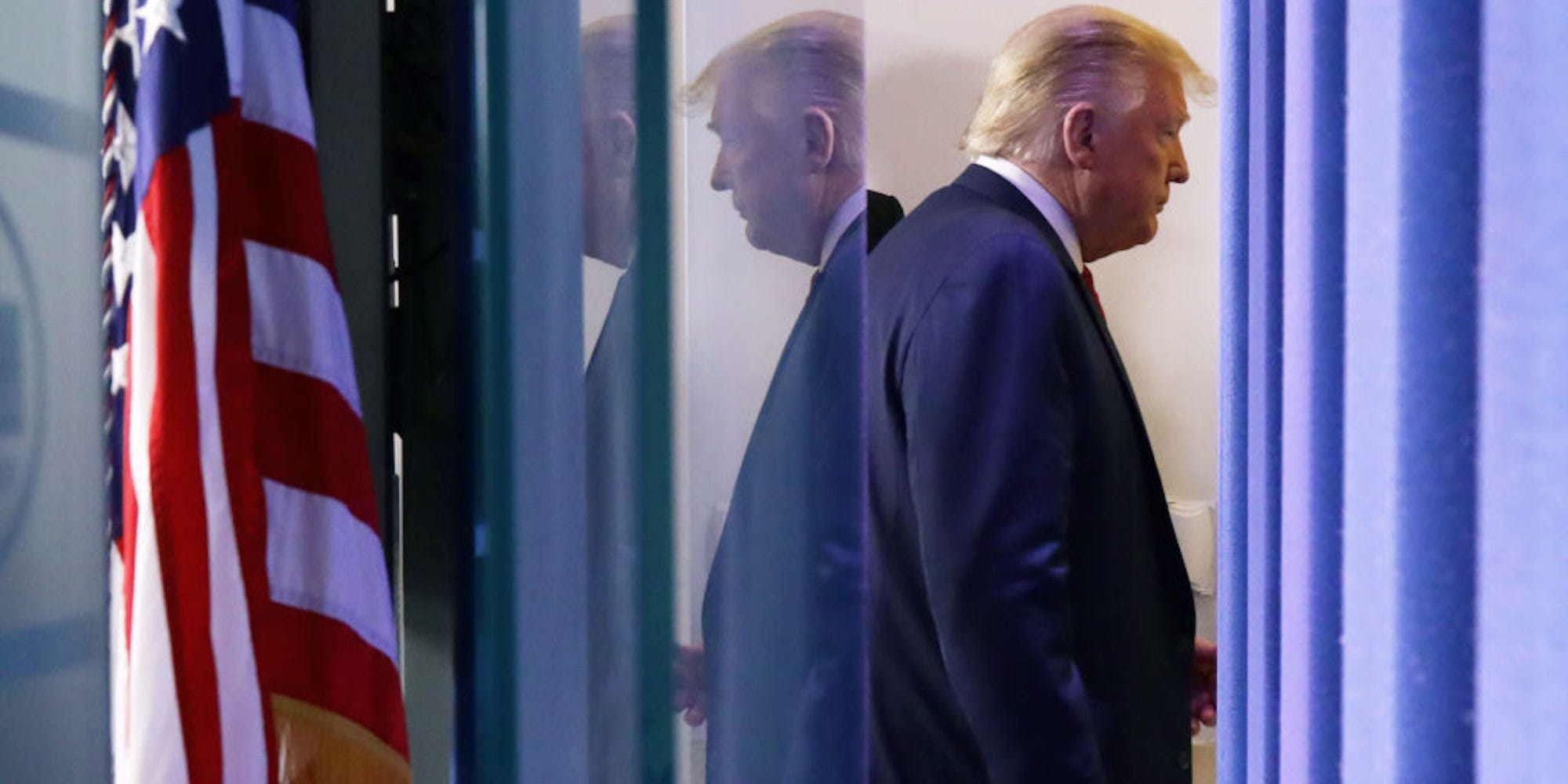 Alex Wong/Getty ImagesPresident Donald Trump leaves the briefing room after he made a statement at the White House on May 22, 2020 in Washington, DC

In one message shared by the president, John Stahl, a conservative who gathered only 3% of the vote in his bid for election to California’s 52nd House district in 2012, called former Democratic presidential candidate Hillary Clinton a “skank.”

The president just retweeted someone calling the first woman nominee of either major political party in the US “a skank” a few hours after another Scarborough murder allegation on the weekend the country closes in on 100K coronavirus deaths. pic.twitter.com/5H2E63kWOn

Like Trump, Stahl is fond of referring to political opponents with insulting nicknames, a review of his Twitter feed reveals.

In another messages shared by Trump, Stahl aimed insulting jibes at House Speaker Nancy Pelosi and Stacey Abrams, who narrowly lost the mid-term race for the governor’s office in Georgia, and is a leading contender to be nominated Joe Biden’s running mate on the Democratic presidential ticket.

Pelosi last week referred to Trump as “morbidly obese” after he admitted to taking hydroxychloroquine, to ward off the coronavirus, which has been shown to cause heart problems.

But some critics have warned that Democratic leaders should not stoop to the name-calling that Trump has long indulged in, amid debate on how best to counter the president’s insults and personal attacks.

With Trump under increasing pressure for his administration’s faltering response to the coronavirus pandemic – which has now killed more than 100,000 Americans – he has doubled down on the personal insults, smears and conspiracy theories about opponents that distinguished his 2016 campaign.

The president has a long record of making demeaning and sexist comments about women, and his presidential candidacy featured the release of the infamous Access Hollywood tapes in 2016, where he boasted of groping women.

But some observers have noted that the president’s incendiary comments and provocations are now getting significantly less attention than they once attracted, as America battles its worst public health crisis in decades.

The president in response to allegations of sexism has pointed to his record of promoting women to senior positions in his administration and businesses.

Some analysts believe that Trump’s use of divisive rhetoric could cost him votes from women in November’s election.

Polls have consistently shown a huge gender gap in how men and women view Trump, with a Gallup survey in March finding that while 49% of men approve of Trump, only 36% of women do.

And recent surveys show his support among one of the key demographics who helped propel him to victory in 2016, white working-class women, may be slipping. Many view him as impulsive and divisive, according to a report by McClatchy last November.

Republican advisers have warned the president that his low standing am0ng white suburban women has gotten worse during the coronavirus crisis, and presents a significant problem for his chances of reelection, reported theDaily Beast in April.