Trump hasn't said a word for weeks about the record-breaking fires ravaging California, Oregon, and Washington — all Democratic strongholds 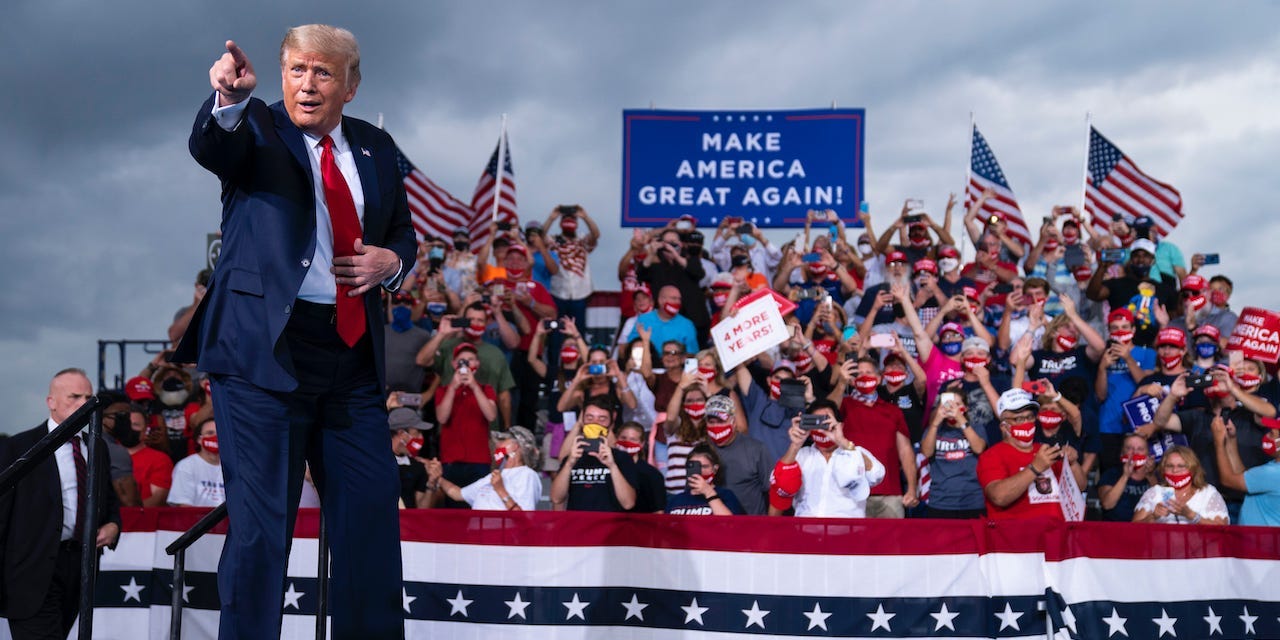 But he hasn’t said a word for weeks â€” on Twitter or at his regular campaign rallies â€” about the deadly, record-breaking wildfires ravaging California, Oregon, and Washington, and other Western states.

California is experiencing its worst fires on record. It’s only the beginning of fire season and more than 3 million acres have already burned â€” breaking the previous record of 1.67 million acres in 2018. Hundreds of thousands of people across the West have been forced to evacuate, thousands of homes have been lost, and millions more people are blanketed in toxic smoke as states run out of resources to battle the blazes. At least 15 people have been killed by the fires in California, Oregon, and Washington.

The last public comment the president made about the fires was during a scripted press conference nearly three weeks ago when he announced he’d approved California’s request for a major disaster declaration and sent federal resources to aid the state.

Three days before that, Trump attacked California, misleadingly blaming the state’s forest management for its fires. He repeated his false argument that the fires could be prevented by “cleaning” forests of flammable brush and threatened to withhold federal assistance.

He went on, “Maybe we’re just going to have to make them pay for it because they don’t listen to us.”

Trump’s claims about fire prevention â€” which he also made amid fires in 2018 and 2019 â€” are misleading at best.

California’s fires could hardly be contained by clearing wood and debris. Scientists say record heat and drought in, in part a result of climate change, are major factors contributing to the intensity of the fires, which are burning a variety of landscapes.

On Thursday, White House spokesman Judd Deere announced the president had calledCalifornia Gov. Gavin Newsom “to express his condolences for the loss of life & reiterate the Administration’s full support.”

“The Federal government continues to support our western neighbours who are battling raging wildfires in a locally-executed, state-managed, and federally-supported emergency response,” Deere said in a statement to Business Insider on Friday. “President Trump is closely monitoring and continues to urge individual emergency preparedness and citizens in impacted areas to listen to the warnings of State and local officials.”

He added that a presidential visit to affected areas “would not be wise as it would divert key first responder resources away from the fire fight.”

It’s unclear why the president is largely silent on the fires. But it could have something to do with the fact that the most affected states are Democratic strongholds. He’s also refused to address climate change, which he’s repeatedly called a “hoax.”

“He told us to stop giving money to people whose houses had burned down because he was so rageful that people in the state of California didn’t support him,” Taylor said in an ad for Democratic presidential nominee Joe Biden.

Newsom has repeatedly condemned Trump’s response to his state’s fires over the last few years. During his video appearance at the Democratic National Convention last month, Newsom slammed the president for threatening “to defund our efforts on wildfire suppression because he says we haven’t raked enough leaves” in 2018.

But Newsom recently insisted he has a “strong personal relationship” with both Trump and Vice President Mike Pence and said he’s grateful that the administration has “responded favourably in addressing the emergency needs of this state” nearly every time he’s asked for assistance.

You don’t believe in climate change. You are excused from this conversation. https://t.co/PSt8N39Er5

“Raking leaves is as effective at combatting the climate crisis as your phone’s spellcheck is at fixing your tweets,” she tweeted at the president. “@GavinNewsom is doing his job. Maybe you should try it.”

Pence reiterated the White House’s official comments when asked about the ongoing disaster during a Fox News interview on Thursday.

“Look, my daughter and son-in-law live in California,” Pence said. “Our hearts go out to all of those enduring or threatened by these fires and I want to assure everyone that we’re going to make sure that those courageous firefighters, that homeowners and businesses have the full support of the federal government.”

Biden has tied the fires to climate change and called it an “existential threat” in tweets this week.

“The images coming out of California, Oregon, Washington, and other Western states are truly horrifying,” Biden tweeted on Thursday. “If you’re in an impacted area, please heed the warnings from your local authorities and stay safe. Jill and I are keeping you all in our prayers.”

We have to get President Trump out of the White House and treat this crisis like the existential threat that it is. pic.twitter.com/NXzkpaRVsY