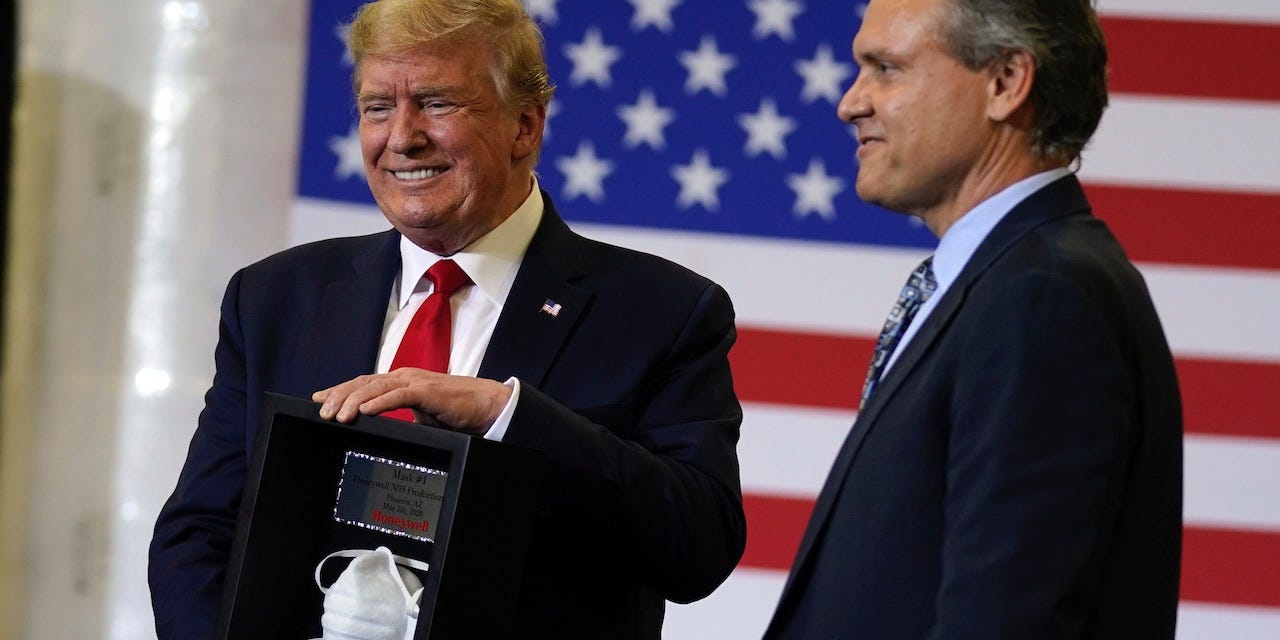 President Donald Trump shared a tweet on Thursday that argued the mandated use of face masks to control the spread of the coronavirus represents a “culture of silence, slavery, and social death.”

The argument against masks was made by a right-wing columnist in The Federalist, a conservative online publication, and claimed that mandating the safety measure was “anti-American” and signalled “indefinite government expansion.”

“Mandatory masks are a critical predicate conditioning us to accept abuses of our liberty,” columnist Molly McCann wrote in the Wednesday piece.

McCann said masks weren’t effective in limiting the spread of the virus and that the government recommended Americans not wear masks in the first weeks of the public-health crisis. But she failed to mention that masks were initially in short supply in the US and officials didn’t want to encourage Americans to buy up the critical protective gear and deprive health workers of necessary it.

Trump retweeted Smith’s message to his 80 million followers and said, “So many different viewpoints!”

Studies have shown that surgical face masks slow the spread of COVID-19. And there is well-documented evidence that even homemade cloth masks help reduce the spread of particles expelled through the nose and mouth and decrease the risk of infecting others. Officials in countries that have better controlled their coronavirus outbreaks say universal mask wearing has helped in that effort.

In April, the Centres for Disease Control and Prevention issued new guidance recommending that all Americans wear some form of cloth face mask in public places where social distancing is difficult. Many governors have mandated the use of face coverings in public places, including public transportation.

Some have gone further. Virginia Gov. Ralph Northam announced that all of his state’s residents must wear a face covering in indoor public places beginning on May 29. (Masks aren’t required for kids under 10 or those with health conditions, and people don’t need to wear them while eating or exercising.)

But many conservatives, led by Trump, have refused to follow that guidance and argue that masks are unnecessary and a violation of their civil liberties. Trump, pitting himself against public-health experts and lawmakers, has helped churn up a cultural and political clash over the safety measure.

So many different viewpoints! https://t.co/DCesPbJu5M