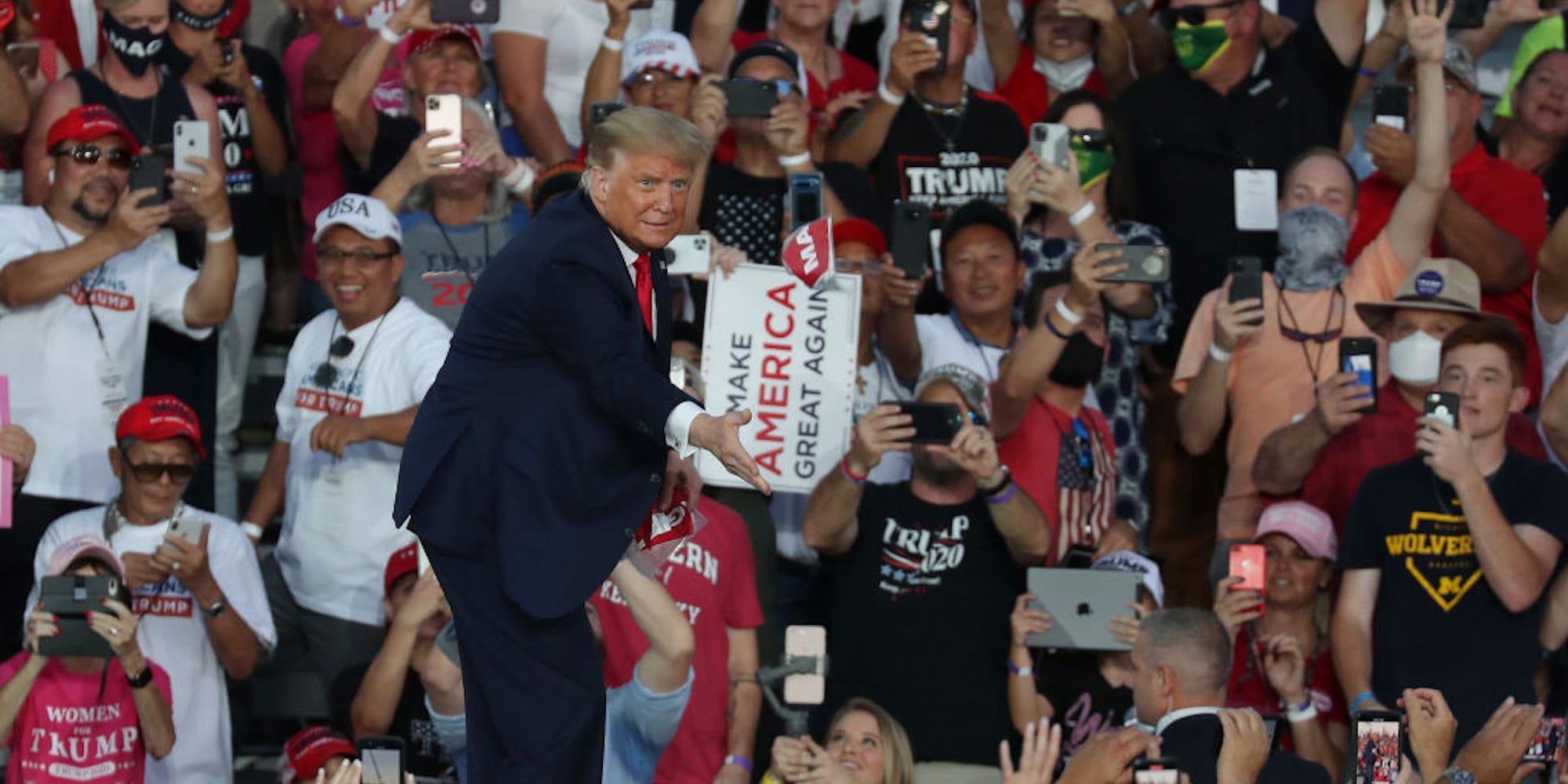 Joe Raedle/Getty ImagesPresident Donald Trump tossing an item into the crowd at a rally in Sanford, Florida — his first since being diagnosed with COVID-19.

President Donald Trump said he wanted to “kiss everyone” in the audience as he returned to the campaign trail at a packed Florida rally on Monday night.

Trump told supporters he felt “so powerful,” a week after his release from Walter Reed National Military Medical Centre, where he was treated for COVID-19.

The event was held outside, though few supporters were photographed wearing masks and most were packed closely together, in violation of social-distancing guidelines.

“I went through it,” Trump said. “Now they say I’m immune. I feel so powerful I’ll walk into that audience.”

(Trump’s claim of immunity is not supported by science.)

He continued: “I’ll walk in there, I’ll kiss everyone in that audience. I’ll kiss the guys and the beautiful women and the â€” I’ll just give you a big fat kiss.”

Trump’s appearance at the rally came hours after his lead physician, Dr. Sean Conley, announced that Trump had tested negative for the coronavirus on two consecutive days and was no longer infectious.

Dr. Conley just put out a new statement, a master class in the art of medical deception.
The "no longer evidence of actively replicating virus" would take culturing the virus and a BSL-3 specialized lab.
And reduced viral load ≠ non infectious. pic.twitter.com/TP8sEULhu2

It was the first time the president’s test results for the virus had been revealed since his announcement early October 2 that he tested positive.

Under Centres for Disease Control and Prevention guidelines, those who test positive are urged to isolate for 10 days. Instead, Trump moved from the White House to the hospital and back again, and took a much-criticised car ride to see supporters, though he did take some measures to distance himself from people.

In his memo, Conley did not say when the negative tests had been taken.

The test Conley said had been used to establish whether the president was infected â€” the Abbott BinaxNOW test â€” was given emergency clearance by the Food and Drug Administration to be used “within the first seven days of the onset of symptoms.”

The tests, which produce a result rapidly, are found to more frequently misdiagnose than the PCR tests, in which test results are established in a laboratory, according to the MIT Technology Review.

Conley said the tests were taken “in context with additional clinical and laboratory data.”

The White House earlier refused several times to disclose when Trump had last tested negative for the disease. This would have revealed how many people Trump might have exposed to the disease when infected.

Dr. Anthony Fauci, a key member of the White House coronavirus task force, on Monday warned in an interview with CNN that holding mass rallies was “asking for trouble” as cases again surged in many states.