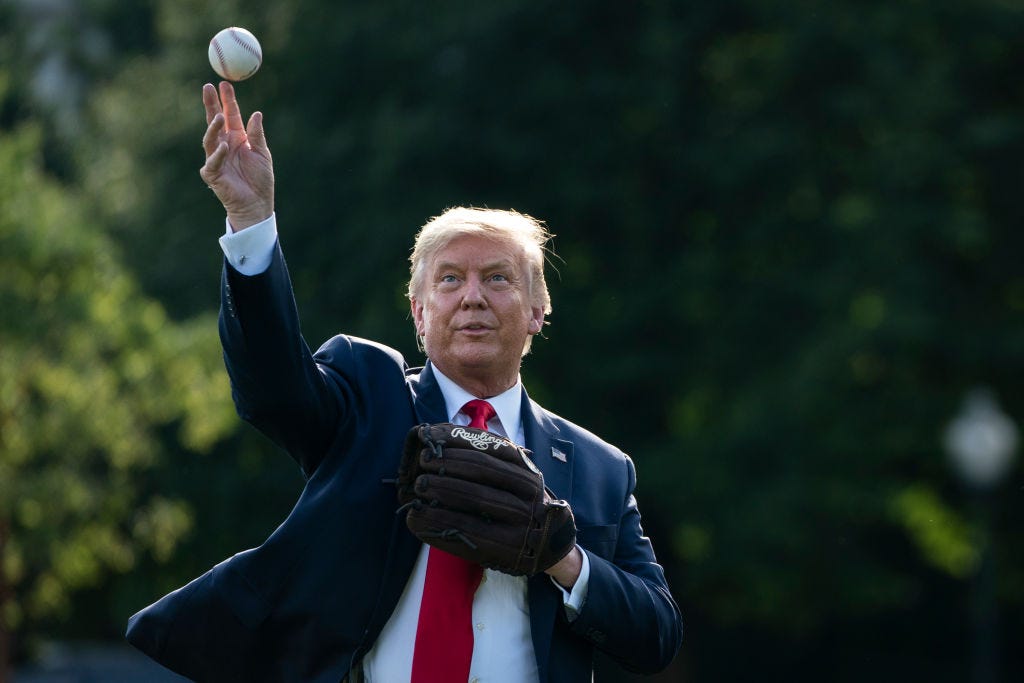 Drew Angerer/Getty ImagesPresident Donald Trump throws a baseball on the South Lawn of the White House on July 23, 2020 in Washington, DC.

President Donald Trump on Monday mocked Dr. Anthony Fauci’s baseball skills and said the nation’s leading infectious disease expert should no longer wear a mask with the Washington Nationals’ logo that he’s been frequently pictured in.

“Tony should stop wearing the Washington Nationals’ Mask for two reasons. Number one, it is not up to the high standards that he should be exposing,” Trump tweeted. “Number two, it keeps reminding me that Tony threw out perhaps the worst first pitch in the history of Baseball!”

The post references Fauci’s ceremonial pitch at the Washington Nationals and New York Yankees opening game in July for the 2020 Major League Baseball season. Fauci, a longtime Nationals fan, was invited by the team because he’s been “a true champion for our country during the COVID-19 pandemic and throughout his distinguished career,” its statement read.

The president’s latest attack comes hours after he ranted about the US’ top public health official during a call with campaign staff, reportedly calling him a “disaster” and downplaying concerns about the coronavirus while infection and death rates surge in dozens of states.

“People are tired of hearing Fauci and all these idiots,” Trump said on the call, according to multiple reports.

In recent days, the president has expressed his growing frustration with Fauci, a member of the White House coronavirus task force who has served as director of the National Institute of Allergy and Infectious Diseases since 1984. At a campaign rally last week, Trump accused Fauci of being a Democrat, though he is not registered with either party.

On Sunday, Fauci said in an interview with CBS’ “60 Minutes” that he was not surprised Trump had contracted COVID-19, given his regular flouting of public health guidelines, such as mask-wearing. The health expert also spoke about his concerns over the president’s use of his image in a recent campaign video.

At the time of the baseball pitch, Trump signalled his annoyance by stating that he was also scheduled to throw a pitch at a Yankees game in August. The announcement surprised both the New York baseball team and White House staff, who said they had no knowledge of such an event, which eventually never made it on the calendar, The New York Times reported.

Trump also made sure in Monday’s tweet to criticise Fauci’s “bad arm.” And a Washington Post data reporter showed that Fauci’s curveball could be ranked as one of the worst in history.

According to exhaustive research previously conducted by The Washington Post, the "worst first pitch" comment *may* be true. Fauci's would be somewhere in the neighborhood of Carly Rae Jepsen and 50 Cent https://t.co/ZcJ5wS77ET https://t.co/CsM3vnI33i pic.twitter.com/5nwpyJReCp

So far, Trump is the only president who has not thrown a ceremonial pitch while in office since the tradition was established in 1910. Yet he had done so before his election, and shared a clip of the scene on Monday along with the caption: “A perfect strike for the American people!”