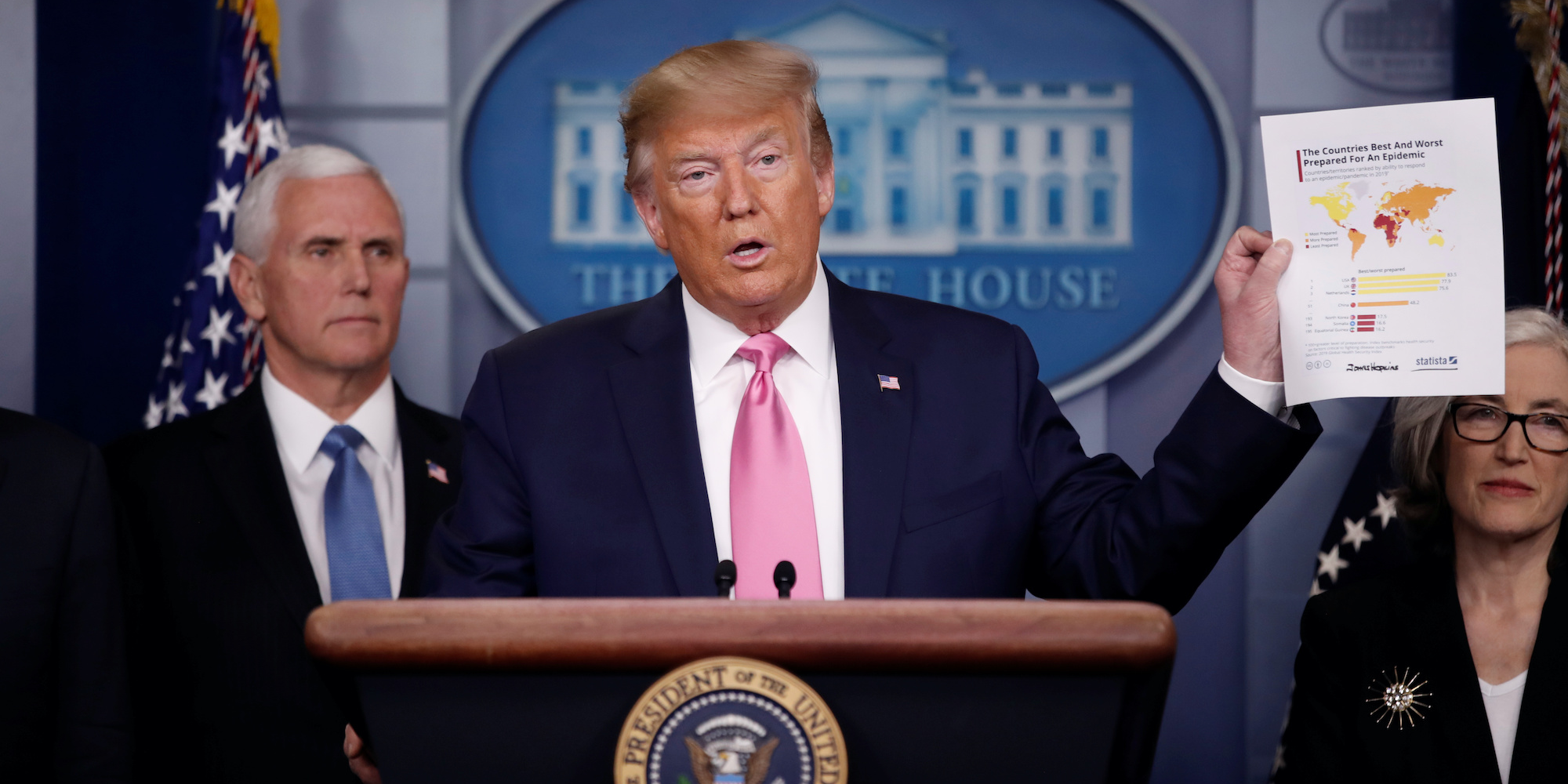 As American public health officials sound the alarm about the potential for a coronavirus epidemic in the US, President Donald Trump is insisting that there’s nothing to worry about and that warnings about a potential pandemic are a “deep state” hoax perpetrated by his political opponents.

On top of that, the president has appointed loyalists to head up a White House task force to respond to a potential outbreak in the US, and the White House has instructed some public health officials not to discuss any more matters related to the virus with the public without prior clearance.

Meanwhile, Fox News and right-wing commentators are assailing public health officials and experts critical of the administration’s virus response and the media who cover it, a pressure tactic used by state-run media under authoritarian regimes.

In all, experts told Insider, the president and his allies’ response to a potential pandemic has all the hallmarks of an authoritarian regime and could lead to dire consequences for the public in the event of an epidemic within the US. 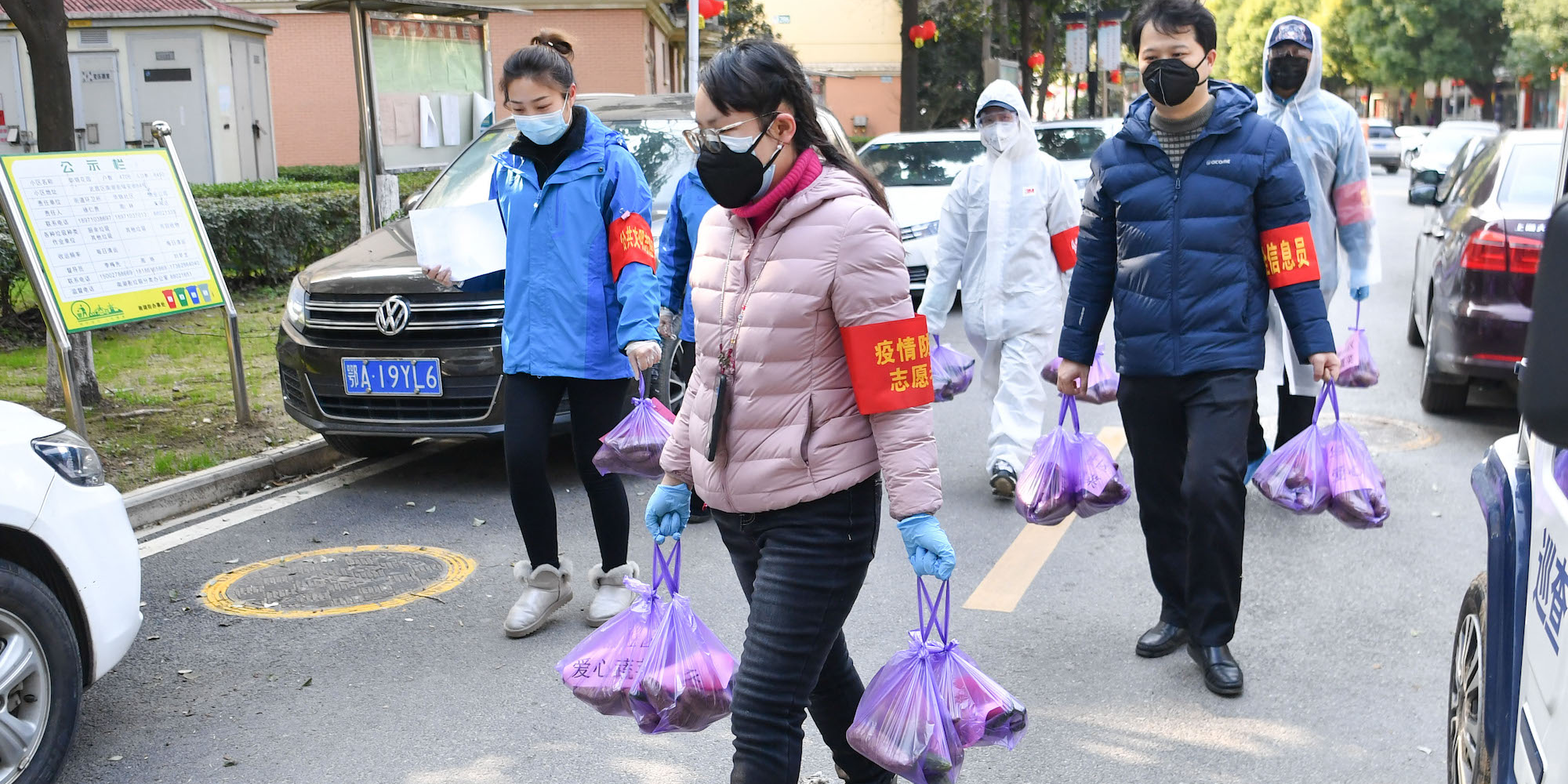 Photo by Cheng Min/Xinhua via Getty ImagesVolunteers deliver vegetables to residents of Huajin community in Wuchang District of Wuhan, central China’s Hubei Province, Feb. 23, 2020. More than 10,000 people in Wuhan have applied for a volunteer project, shortly after its kick-off on Sunday morning. Authorities announced the project of recruiting volunteers to buy and deliver groceries and other essentials to local residents, as it is difficult to buy daily necessity for some residents after the lockdown of the city.

The death toll from the coronavirus outbreak has reached 2,858, with more than 83,000 people infected, as of Thursday night. China has seen a drop-off in its rate of new cases, but the virus seems to be gaining momentum in other parts of the world.

As of Thursday, the coronavirus has spread to every province and region in China as well as at least 51 other countries. At least 64 people have died outside of mainland China.

The unprecedented spread of the coronavirus is a massive test of Chinese President Xi Jinping’s authoritarian system in China and the surveillance state he’s built up over the years. Senior government officials have carried out efforts to silence doctors and local officials in Wuhan – the epicentre of the crisis – from getting information out to the public about what they believed was a SARS-like disease outbreak.

“In China and Iran, both experiencing major outbreaks, early action has been undermined by efforts to halt and control free flow of information,” which has limited the public’s understanding and willingness to “share vital information with officials,” said Matthew Kavanagh, an assistant professor of global health at Georgetown University.

China’s efforts to control messaging about the virus points to the fact that the country is more concerned with social and economic stability, as well as the image of Chinese President Xi Jinping’s communist party, said Stephen Hess, a professor of political science at Transylvania University who is an expert on authoritarianism.

Medical experts in China have also been barred from having frank discussions with the public about the risks of the disease, while government officials take over that responsibility instead.

That’s why public health experts were alarmed when Trump bypassed scientists and instead put Vice President Mike Pence – a loyalist with a spotty record of confronting health crises as a governor – in charge of controlling messaging on the spread of the virus.

On Thursday, Dr. Anthony Fauci, the head of the National Institute of Allergy and Infectious Disease, reportedly told Pence that day that the “virus has adapted extremely well to human species” and appears to have a higher mortality rate than the flu virus.

“We are dealing with a serious virus,” Fauci said.

After that, The New York Times reported that Fauci told associates the White House instructed him not to say anything else without further clearance. And on Friday, Fauci told lawmakers during a congressional briefing that he “was not muzzled” by Pence’s office but that he was told not to do a series of planned Sunday show interviews.

“Even Alex Azar,” the secretary of Health and Human Services, “who was in charge of the White House task force on this – the president was concerned he was being overly alarmist by warning people the disease was likely to come to the US,” Hess said. “So that’s part of the motivation of putting Pence in charge, to control messaging and silence medical experts.”

Since taking over the White House’s task force, Pence has also stacked it with top economic advisers like Larry Kudlow and Treasury Secretary Steve Mnuchin.

“These are not people who have anything to do with health or who have a background in infectious disease,” Hess added. “It’s interesting that you would have these people on the task force, and it raises questions about what the primary motivation is.”

On Thursday, The Times and The Washington Post also detailed an official complaint from a HHS whistleblower who alleges that they were threatened with firing after reporting concerns about the way the department was training its employees to treat American evacuees from China and other hotbeds for the virus.

According to the reports, the individual, who is a senior official based in Washington, DC, claims the US sent health officials to process evacuees at two bases in California without proper training or protective gear. The first instance of “community spread” of the virus was documented at one of those bases earlier this week.

Ruth Ben-Ghiat, a historian at New York University, pointed to Trump’s attempt to control messaging and silence public health experts and said it “smacks of the methods of an authoritarian government rather than a democracy that operates on the principles of transparency for the public good.”

Trump’s behaviour prior to coronavirus has also left the US ill-prepared to handle a public health challenge of this magnitude, experts warn.

Ariana Berengaut, who oversaw messaging and communications strategy for key USAID initiatives during the Ebola outbreak under the Obama administration, told Insider that Trump has corroded the comparative advantages democracies typically have over authoritarian systems in approaching public health crises to “profound effect.”

“The US is about to go through a very challenging time, where the hollowing out that Trump has been doing, eroding the democratic guardrails and strengths of this country, are going to be clear,” Berenguat said.

The White House has no credibility, Berengaut added, and the public has no reason to believe the administration’s statements on coronavirus with Pence in control of messaging.

She also pointed to the Trump administration’s repeated decision to cut funding for pandemic preparedness and global health security.

“These absolute failures of leadership to protect the American people are glaring,” Berengaut said. 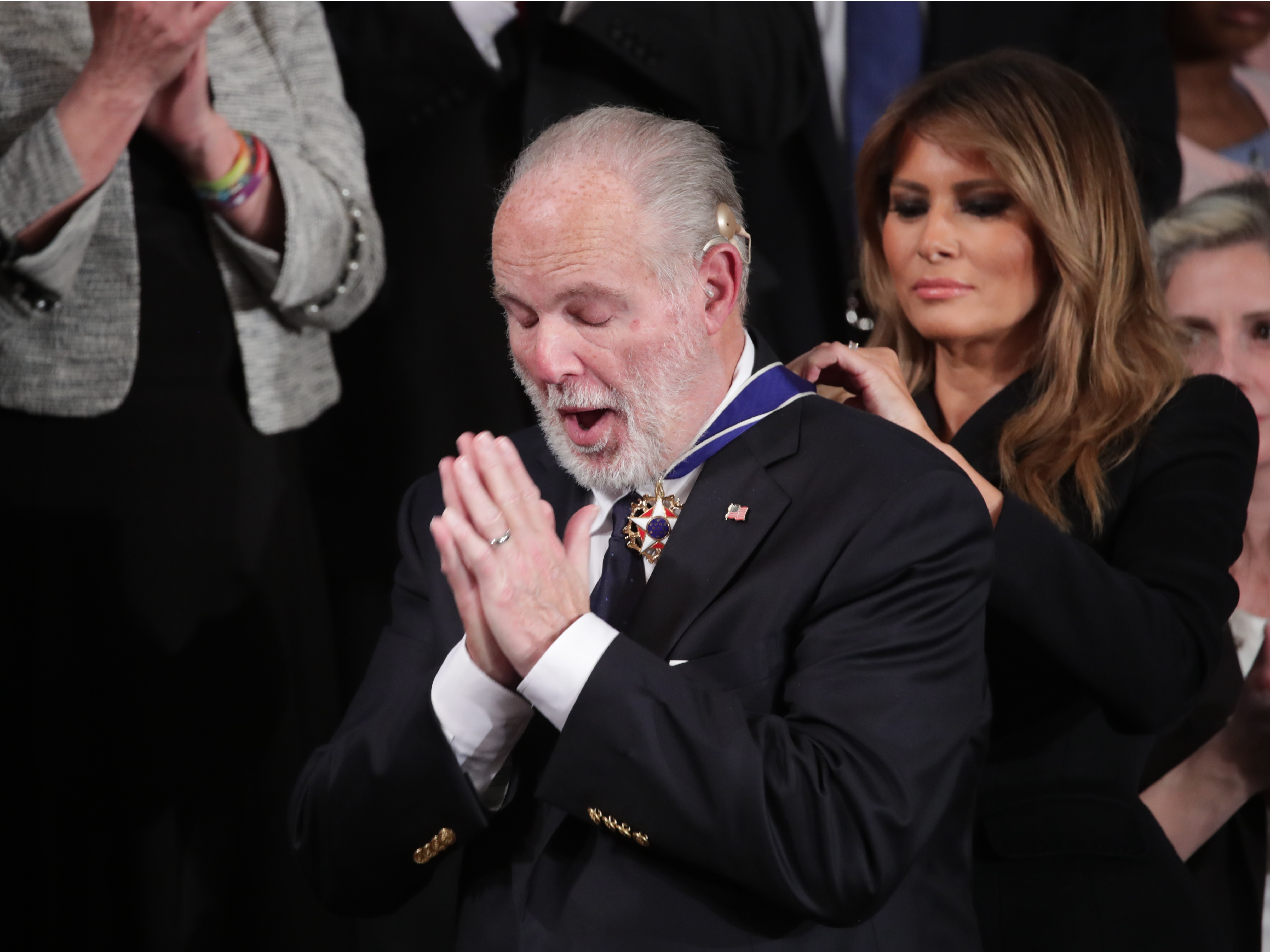 Then there’s the right-wing media, which often acts as a Trump defender whose talking points echo those of the White House.

The conservative radio and TV hosts Rush Limbaugh and Laura Ingraham have both spread conspiracy theories suggesting the coronavirus is the same as the “common cold” and that Democratic lawmakers are hyping up the risks to hurt Trump.

“They are trying to use this coronavirus to scare the hell out of everybody in their madcap hopes of finding something that will get rid of Donald Trump,” Limbaugh said. “It’s exactly like the panic and fearmongering you heard for two years over Russia meddling in and stealing the election.”

“Democrats and their media cronies have decided to weaponize fear and also weaponised suffering to improve their chances against Trump in November,” she said during her Wednesday night program. “The facts don’t matter to the Trump haters.”

The right-wing media is amplifying the agenda of the administration in a cloak of patriotism while trying to shame and silence voices that are critical of it, said Hess, who noted this is a hallmark in authoritarian countries.

“There’s this effort here to craft the truth about the disease for political purposes, and certainly partisan media is operating in a similar way to how state media functions in places like China,” Hess said.

In China and Iran, the governments’ censorship enables regimes to manipulate statistics and restrict people’s access to raw numbers. But in the US, official statistics are far less prone to manipulation.

The US stock market is one sign of falling confidence. Indeed, the Dow Jones is at the tail end of its worst week since the 2008 financial crisis as it headed into the seventh day of massive sell-offs amid coronavirus fears.

“The president’s effort to control the messaging and put Pence in control didn’t ease investors’ fears,” Hess said. “We see the markets continuing to plummet even after that, it’s almost like they voted against his claims because there’s a lack of confidence in what the president’s response is.”

In the end, Hess said, “the truth will come out one way or another.”