Trump has been making life hard for Ford since 2016. His reluctance to wear a mask for a plant visit this week is just the latest example. 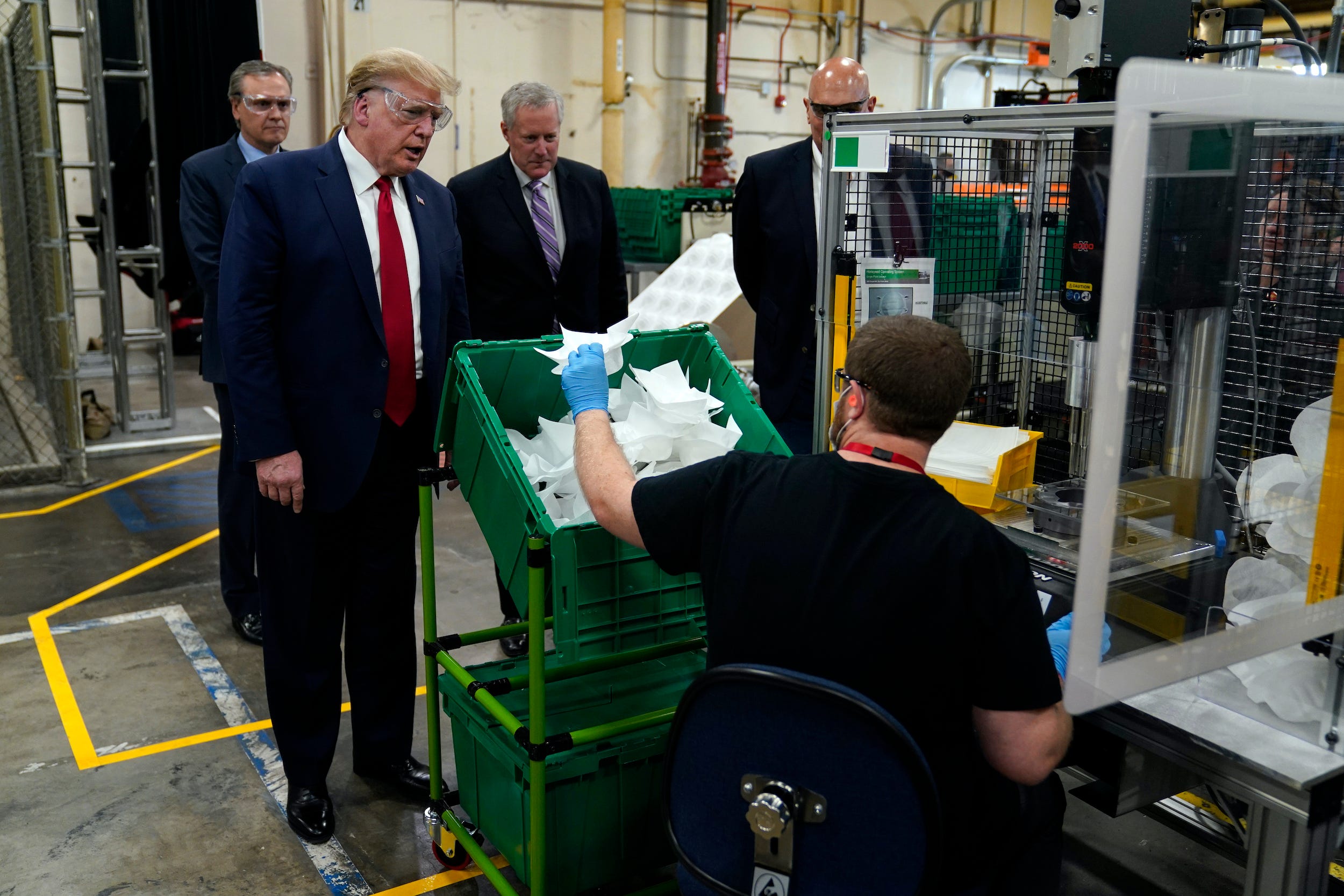 Will he wear a mask? Or will he skip it, as he’s done for previous photo ops?

That was the main question that immediately arose when President Donald Trump and Ford said the chief executive would visit the carmaker’s Rawsonville factory in Ypsilanti, Michigan, this week.Ford and GE Healthcare partnered to manufacture ventilators after the coronavirus pandemic worsened in March and Ford idled global vehicle production.

A volunteer workforce has been staffing the Rawsonville plant, and Ford has been applying a range of post-COVID-19 measures to ensure safety, including temperature screenings, wellness evaluations, masks, gloves, face shields, special wristwatches to enforce social distancing, and frequent cleanings. So far, Ford hasn’t had a positive coronavirus test at the facility.

According to the Michigan governor’s office, nobody nonessential is supposed to be touring the plant, but it seems that everyone is going to look the other way for the president and his entourage.

Trump obviously isn’t going to commit to mask wearing. “I haven’t even thought of it,” he said at the White House, according to published reports.

“It depends. In certain areas I would, in certain areas I don’t. But I will certainly look at it. It depends on what situation. Am I standing right next to everybody, or am I spread out? And also you look, is something a hospital? Is it a ward? What is it exactly? I’m going to a plant. So we’ll see. Where it’s appropriate I would do it certainly.”

Ford had already telegraphed that it wants Trump to mask up, but I wouldn’t count on it. And as of Wednesday, the carmaker appears not to wish to tangle with the president on the issue. FordFord has been manufacturing PPE in addition to ventilators.

Trump has long been clueless about the US auto industry, which he sees as symbolic and politically useful, given his base of disgruntled working-class voters in swing states where General Motors, Ford, and Fiat Chrysler Automobiles have plants. The complicated, multinational nature of the 21st-century car business is irrelevant to him, something that he proved on the campaign trail when he attacked Ford’s plans to build a new factory in Mexico. It didn’t matter that such a factory would have enabled the company to focus on more profitable, fast-selling pickups and SUVs in the US.

Before this pandemic, the industry had settled into a sort of useful détente with Trump. Make no mistake – the Detroit Big Three liked their corporate tax cut. They were also welcoming of a rollback of Obama-era fuel-economy regulations, although the move by the Trump administration has split Detroit’s biggest rivals, with Ford siding with California’s tougher stance while GM has gone along with the new standard. (What’s unclear is whether California will get to keep its longstanding waiver to the rules, a matter that’s going to be decided in the court.)

The leaders of the Big Three, given their experience restarting in China after shutdowns that preceded the US, know exactly what they need to do in their plants to protect workers. In China, everything that Ford has now piloted at Rawsonville has worked, so the last thing the company really needs is an unmasked Trump show swaggering into the plant and trying to use the normalization of a manufacturing operation to signal to supporters that all is well and the economy should rapidly reopen this summer to solve Trump’s coronavirus problem by the November election.

Trump and Ford have been to this dance before 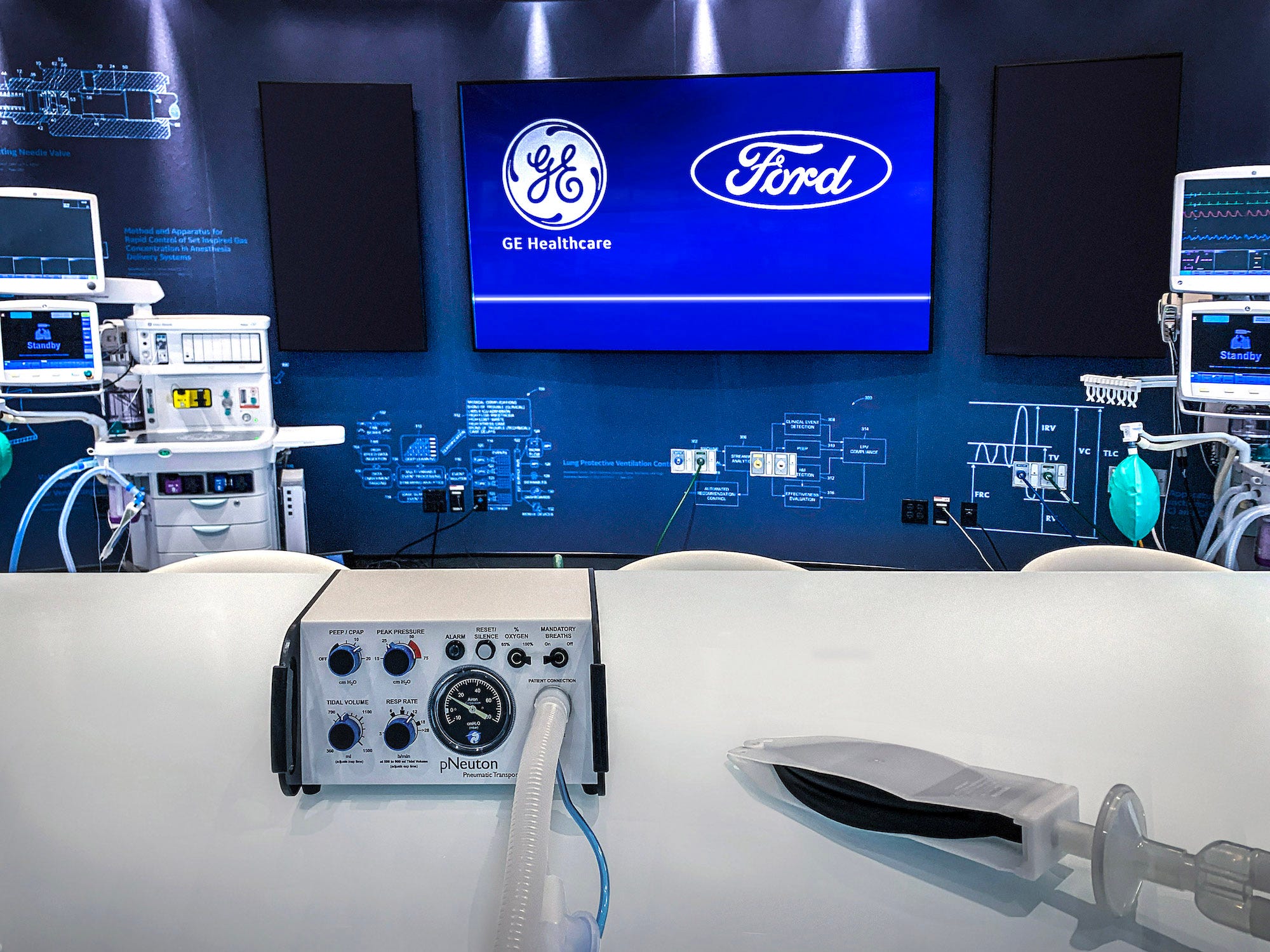 FordThe ventilator that Ford is making.

There is an outside chance that Bill Ford, great-grandson of Henry Ford and the carmaker’s chairman, picks up the phone and begs the president to wear a mask, just to demonstrate the appropriate level of support for workers who risked their health to deal with the country’s ventilator shortage, which was ultimately the Trump administration’s fault.

But that could cost Trump too much. Heading into June, the US economy and president’s reelection chances are at a critical juncture. An aggressive restart could somewhat revive the Main Street economy, eliminating the liability of a stock market that has shrugged off historic unemployment and highlighting Trump’s reliance on Wall Street and corporate America.

Yet again, the Ford Motor Co., nearing its 117th birthday, finds itself smack in the middle of a Trump dustup, unsure of what’s going to happen on Thursday and surrendering to the fallout. It should be different this time around. But it probably won’t be.