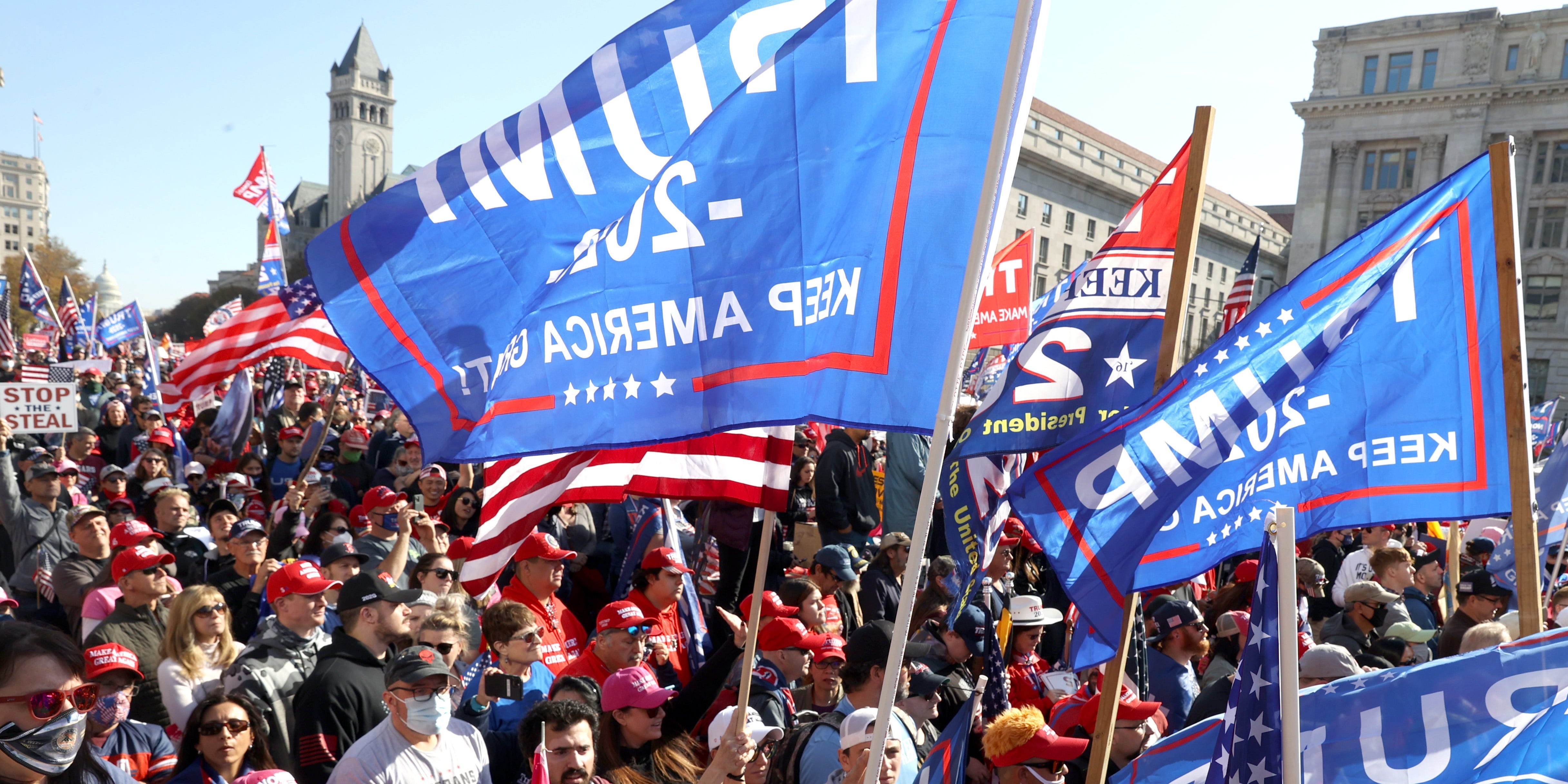 Tasos Katopodis/Getty ImagesPeople participate in the “Million MAGA March” from Freedom Plaza to the Supreme Court, on November 14, 2020 in Washington, DC.

Crowds of President Donald Trump’s supporters rallied in Washington, DC, Saturday to back his baseless claims that the election was stolen on Saturday.

Democratic presidential nominee Joe Biden defeated Trump and became president-elect after winning20 electoral votes from Pennsylvania, Insider and Decision Desk HQ projected last week. However, the president has not yet conceded and has repeatedly floated baseless claims of voter fraud.

The president’s supporters have rallied behind his claims and protested the results of the election, with many organising “stop the steal” demonstrations.

Saturday’s rally in DC attracted thousands of supporters, including conservative speakers and members of the extremist far-right group “Proud Boys,” according to The Washington Post. Some demonstrators gathered at Freedom Plaza a block from the White House as crowds marched down nearby Pennsylvania Avenue.

The Proud Boys arrived at the Supreme Court rally, as police scrambled to keep them back. After I took this, officers cleared the entire area on the other side of the fence opposite where Proud Boys and supporters had gathered. #DCProtests pic.twitter.com/X4YFjQ5lj0

AMAZING! Can hear you all from the West Wing Colonnade. A beautiful day in Washington, D.C. THANK YOU, PATRIOTS!! #MAGA???????????? pic.twitter.com/RJJ8bvYlfr

McEnany claimed “more than one million” protesters were present, contradicting reports from the Post and Fox News that the march attracted thousands of supporters.

More than one MILLION marchers for President @realDonaldTrump descend on the swamp in support.

Several videos posted on social media showed the president wave to supporters as he drove by the rally in a motorcade Saturday morning.

Later that afternoon, Trump wrote above a picture of the crowd tweeted by Scavino that the rally was evidence “people are not going to stand for having this Election stolen,” further amplifying his baseless claims of voter fraud.

USA Today reporter Christal Hayes wrote on Twitter that some counter-protesters were present at the rally as well.

Though Biden’s campaign has activated its transition team and reportedly identified top picks for key Cabinet roles, they cannot yet begin a formal transition until the General Services Administration has formally determined the “apparent successful candidate” in the election, the Associated Press previously reported.