Trump is pushing to reopen schools, which he claims are closed for political reasons and not to curb the coronavirus' spread

JIM WATSON / AFP) (Photo by JIM WATSON/AFP via Getty ImagesPresident Donald Trump at a roundtable discussion in the East Room of the White House on Tuesday on school reopenings.

President Donald Trump has pushed back at states considering keeping schools closed in the fall, describing such a move as “political” and saying it goes against the will of parents and students.

During White House discussions on Tuesday on how to safely reopen America’s schools, Trump insisted that everyone was in favour of plans to send children back to school in September, despite the alarming rise in the number of new coronavirus cases across the US.

Trump touted a declining number of coronavirus deaths, higher rates of testing, and a resurgence of new jobs as indications that US schools should reopen.

Still, experts have warned that the novel coronavirus’ death rate is likely to rise again as the number of new cases continues to rise. And while young people are less likely to get seriously ill or die from the disease caused by the new coronavirus, infections appear to be spreading quickly through younger generations.

“What we want to do is we want to get our schools open,” Trump said. “We want to get them open quickly, beautifully, in the fall. And the – as you know, this is a disease that’s a horrible disease, but young people do extraordinarily well.”

Trump added that some state governors might be seizing on the opportunity to keep schools closed as a “political statement” rather than as a way meant to prevent the spread of COVID-19.

“We don’t want people to make political statements or do it for political reasons. They think it’s going to be good for them politically, so they keep the schools closed. No way,” he said. “So we’re very much going to put pressure on governors and everybody else to open the schools, to get them open.”

Trump has also recently claimed that some Americans are wearing masks as a political statement to express their disapproval of him, despite evidence suggesting that face coverings are an effective way to reduce the virus’ transmission.

Schools across the US transitioned to virtual learning in response to the pandemic earlier this year. Some states have said they will reopen in September, some with staggered class times and limited capacity. Florida’s Department of Education issued an emergency order Monday requiring schools to reopen in August, despite the state’s worrying rise in cases. 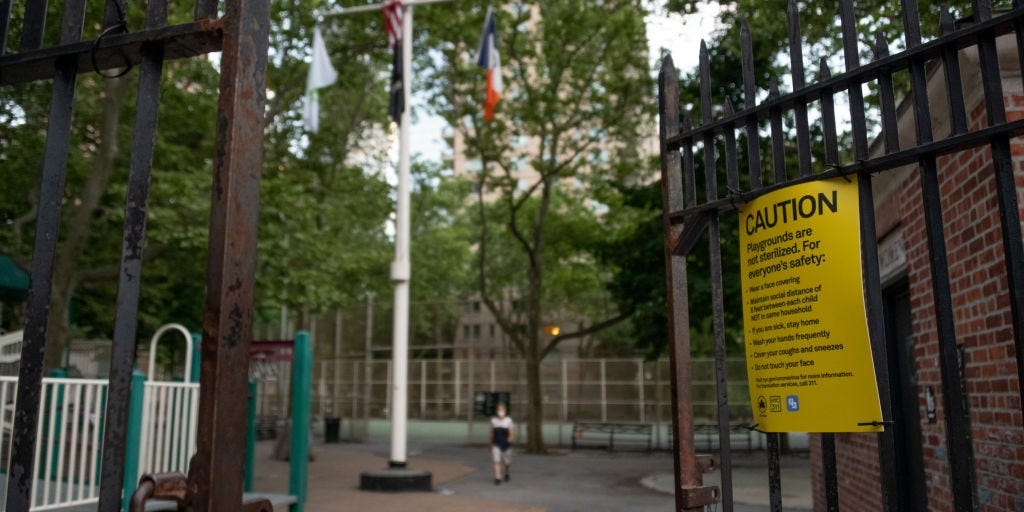 Alexi Rosenfeld/Getty ImagesA caution sign with instructions on the entrance to a playground in New York on June 23.

Trump in his remarks praised Florida’s governor, Ron DeSantis, saying he was doing a “terrific job.” Florida is one of the hot spots in the US with a surge of cases.

Vice President Mike Pence also pushed governors to reopen their schools during a call with local leaders Tuesday, arguing that keeping schools closed had negative impacts on learning and mental health along with the economy.

Betsy DeVos, the secretary of education, also told governors on the same call that schools “must be fully operational” and criticised school districts as underserving students through remote-learning initiatives.

As of Tuesday, the US Centres for Disease Control and Prevention recorded 2.9 million cases and more than 130,000 deaths in the US – both the most of any other country.