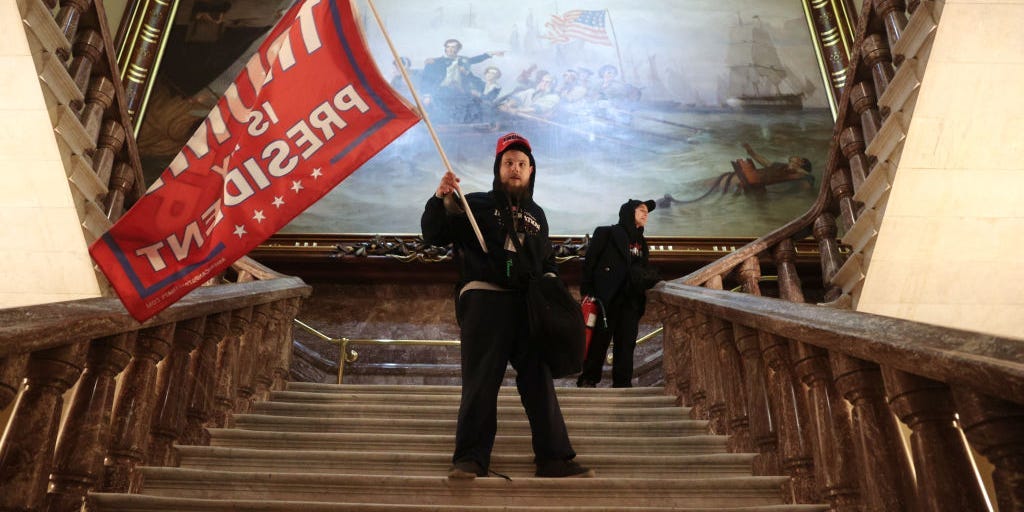 Win McNamee/Getty ImagesA protester holds a Trump flag inside the US Capitol Building near the Senate Chamber on January 06, 2021

President Donald Trump on Wednesday riled his supporters up in a speech filled with lies about the election before they stormed the US Capitol in a stunning act of insurrection the likes of which the US has not seen in the modern era.

Meanwhile, Trump, the self-declared “LAW AND ORDER” president, retreated to the White House after provoking his supporters to violence and destruction. His remarks started a fire that consumed Capitol Hill and then he walked away to tweet.

The riots at the Capitol building prompted Congress to delay the certification of the Electoral College vote, and saw lawmakers â€” and Vice President Mike Pence â€” evacuated from the premises.

Trump supporters made it into the building, taking selfies and entering the House chamber.

After attacking Pence in a tweet for not having the “courage” to overturn the election result, the president in subsequent tweets called on his supporters to remain calm and avoid violence. But the situation had already spiraled out of control by that point, and Trump showed no signs of taking more substantive actions to quell the insurrection.

During his speech, which took place near the White House, Trump falsely said that President-elect Joe Biden would be an “illegitimate” leader. “We will never give up, we will never concede. You don’t concede when there’s theft involved,” Trump said, offering no evidence to validate his incendiary, baseless assertions.

“We’re going to walk down to the Capitol. And we’re going to cheer on our brave senators and congressmen and women, and we’re probably not going to be cheering so much for some of them,” Trump said to his supporters.

“Because you’ll never take back our country with weakness,” he added. “You have to show strength, and you have to be strong.”

Trump closes with this: "We're going to walk down Pennsylvania Ave … and we're going to [try] to give our Republicans — the weak ones because the strong ones don't need any of our help — we're to try and get them kind of pride and boldness they need to take back our country" pic.twitter.com/dzGgoXD8FQ

But Trump did not join his supporters. He sat back and watched the pandemonium that he incited consume the nation’s capital.

“This is absolutely utterly despicable,” Republican Rep. Adam Kinzinger of Illinois, an Air Force veteran, said on CNN in response to the events.

“Anywhere else around the globe we would call this a coup attempt,” Kinzinger added.

Indeed, what happened in DC on Wednesday amounted to an attempted coup, or a violent overthrow of government and the US Constitution and law, which sets up the electoral certification as a last act formalising the will of voters. The US government routinely issues forceful denunciations of attempted coups when they occur abroad.

The disturbing scenes on Wednesday halted the democratic process, putting the country in a state of political limbo. Trump made it abundantly clear this is precisely what he wanted to happen.

Trump eventually called on his supporters to “go home” in a video posted to Twitter, in which he continued to pour fuel on the fire by repeating his false claim that the election was “stolen” from him.