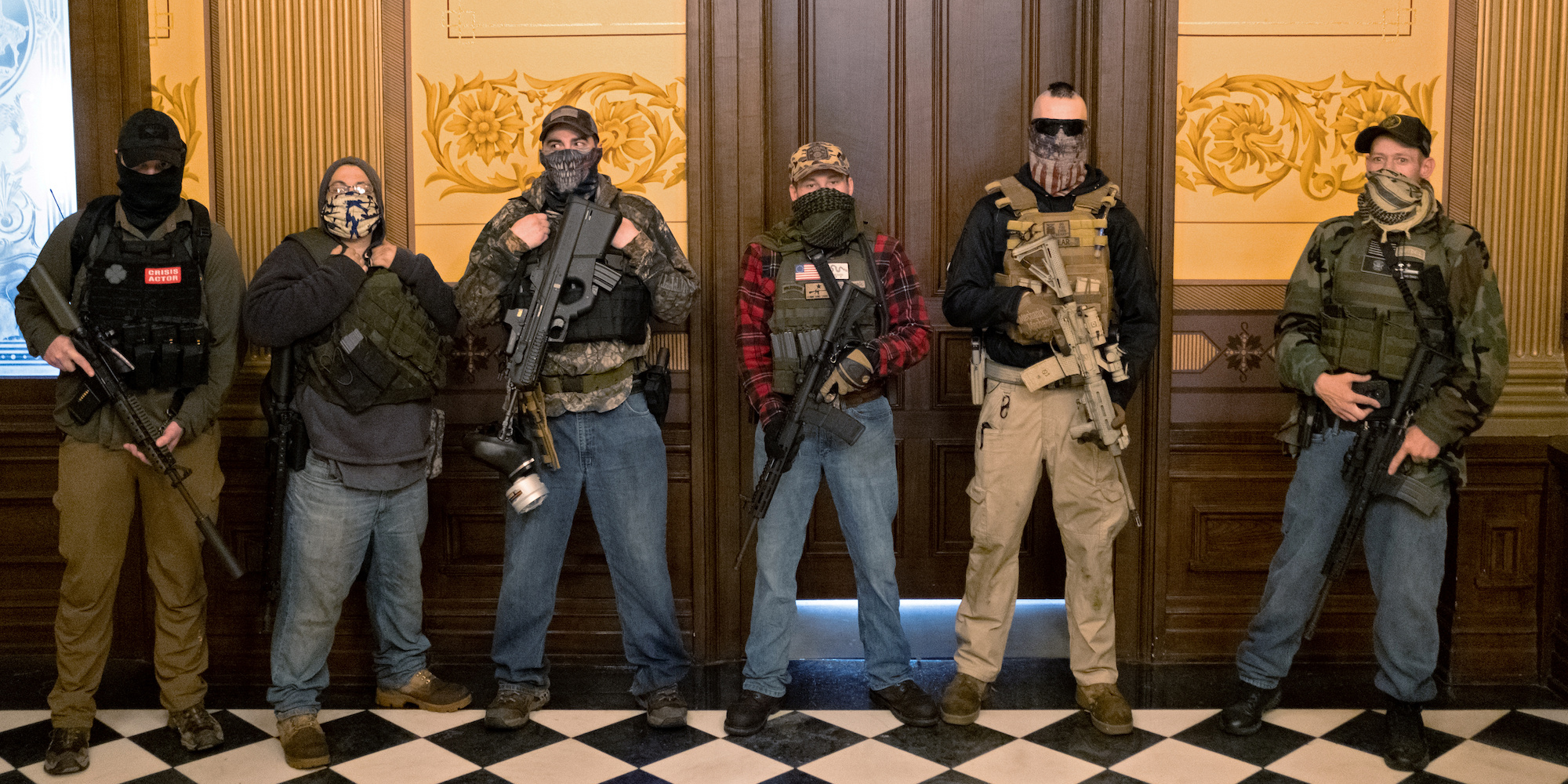 Seth Herald/ReutersA militia group with no political affiliation from Michigan stands in front of the governor’s office after protesters occupied the Capitol in Lansing on Thursday during a vote on extending Gov. Gretchen Whitmer’s emergency declaration and stay-at-home order in response to the coronavirus outbreak.

In a tweet on Friday morning, President Donald Trump described protesters in Michigan as “very good people” and suggested that the governor should strike a deal with them.

On Thursday, hundreds of protesters – many of them carrying guns – descended on the Michigan Capitol to oppose Gov. Gretchen Whitmer’s extension of the state’s stay-at-home order by another two weeks, to May 15.

“The Governor of Michigan should give a little, and put out the fire,” Trump wrote. “These are very good people, but they are angry. They want their lives back again, safely! See them, talk to them, make a deal.”

It is unclear what kind of a deal Trump was referring to. While Whitmer extended the order, telling citizens to stay home and keeping nonessential businesses closed, she also relaxed some of the restrictions in the original order.

Michigan residents are still required to follow social-distancing guidelines but are now allowed to travel between their main and second homes, go out boating, and play golf.

Michigan, one of the states hit hardest by the COVID-19 pandemic, is not close to meeting the Trump administration’s own guidelines for reopening economies and lifting stay-at-home orders, one of which is experiencing 14 days of declining positive cases.

As of Thursday, Michigan health officials had reported more than 41,000 COVID-19 cases in the state and 3,789 deaths, with 980 new cases and 119 new deaths reported on Wednesday.

Also on Thursday, Whitmer issued a new executive order extending Michigan’s state of emergency for 28 days. The Republican-led Michigan House of Representatives had declined her request to extend the declaration that was expiring, and it authorised a lawsuit challenging her emergency authority.

Whitmer’s stay-at-home order, now extended to May 15, and emergency order, extended to May 28, keep “places of accommodation” like restaurants, bars, movie theatres, and gyms from providing in-person services, while still allowing restaurants to offer take-out and delivery.

Protesters have demonstrated against stay-at-home orders at capitols in dozens of states. But Thursday’s protests in Michigan were the starkest example yet of protesters actually entering a capitol while the legislature was in session – and bringing weapons with them.

Trump has previously expressed support for people protesting lockdown orders in multiple states, calling to “LIBERATE” Michigan, Virginia, and Minnesota in a series of tweets on April 17.

Some protesters also carried signs referring to Whitmer as a “tyrant” and others even comparing her to Hitler.

Members of a militia group stand near the doors to the chamber in the Michigan state capitol before the vote on the extension of Governor Gretchen Whitmer's stay-at-home order. More images of Americans protesting coronavirus restrictions: https://t.co/outazANWyS ???? @Seth_Herald pic.twitter.com/uYGUpHUkoL

As state Rep. Mari Manoogian and the news outlet MLive have explained, Capitol rules prohibit people from bringing protest signs into the building over fears that the sticks that often prop them up could scratch the paint on the walls.

Michigan is an open-carry state, however, and there are no rules barring people from bringing guns into the Capitol.

“It’s always been on the books – even before the last constitutional convention – the right to open carry in Michigan,” Sgt. Jeffrey Held of the Michigan State Police told MLive.

“We just worry about damaging the walls, because on the decorative paint, a sign turning the wrong way or even a rifle can gouge the thing,” Steve Benkovsky, the Capitol facilities manager, told the outlet.

“Until one of the legislators comes up and says let’s make this a weapon-free zone, or they put in some stipulation like you can’t bring long rifles in here but you can wear sidearms, I’ve got to live with it,” Benkovsky added. “It’s not a fun thing though. It’s tough.”

While the protests and backlash against Whitmer’s aggressive measures to mitigate the spread of COVID-19 have garnered a significant amount of attention, polling has found that Michiganders are largely supportive of Whitmer and her administration’s handling of the crisis.

An exhaustive nationwide survey of over 22,000 Americans in all 50 states conducted by a team of researchers from Harvard, Northeastern, and Rutgers published on Thursday found that among a sample of 555 Michiganders, 68% said they thought their state government was “reacting about right” to the crisis, while 24% said they thought it was overreacting. The poll had a margin of error of plus or minus 4 percentage points.

Another poll released on April 20 from the pro-business Detroit Regional Chamber and the Glengariff Group found that 57% of Michiganders approved of Whitmer’s handling of the crisis, compared with 37% who disapproved, giving her a net approval rating of 20 percentage points.