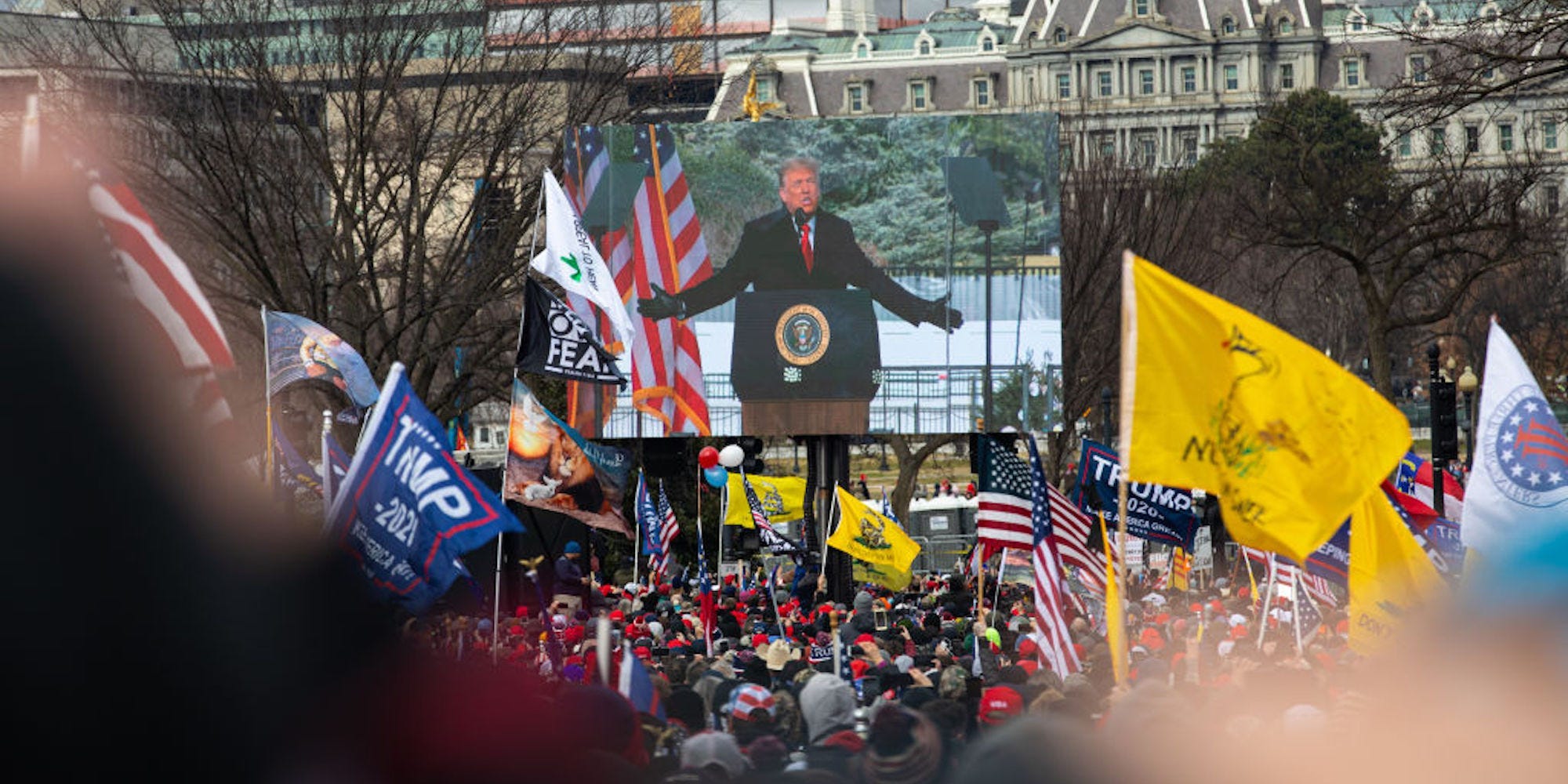 Getty ImagesTrump addresses supporters in Washington DC on January 6, 2021, ahead of a march on the US Capitol which evolved into an armed attack.

The statement was an apparent climb-down after his supporters attacked the US Capitol and forced lawmakers to temporarily abandon proceedings to certify the results of the election Biden won.

The statement was issued at 3:49 a.m. local time, just after Congress concluded the process of certifying Biden’s victory.

The statement was released by White House social media director Dan Scavino. At the time Trump was unable to post from his own account, having been banned by Twitter for earlier posts that the network said risked worsening the violence.

Statement by President Donald J. Trump on the Electoral Certification:

“Even though I totally disagree with the outcome of the election, and the facts bear me out, nevertheless there will be an orderly transition on January 20th. I have always said we would continue our…

Trump said: “Even though I totally disagree with the outcome of the election, and the facts bear me out, nevertheless there will be an orderly transition on January 20th.”

“I have always said we would continue our fight to ensure that only legal votes were counted. While this represents the end of the greatest first term in presidential history, it’s only the beginning of our fight to Make America Great Again!”

The statement marks a shift in tone in the wake of Wednesday’s violence, that has left four people dead, including a Trump supporter who was fatally shot inside the Capitol building.

Trump continues in the new statement to baselessly allege that the election was stolen from him as a result of fraud, the same conspiracy theory that fuelled Wednesday’s riot.

But it is the first time he has openly committed to a peaceful transfer of power after Biden’s victory, having previously refused to commit to one of the cornerstones of American democracy by making the pledge. 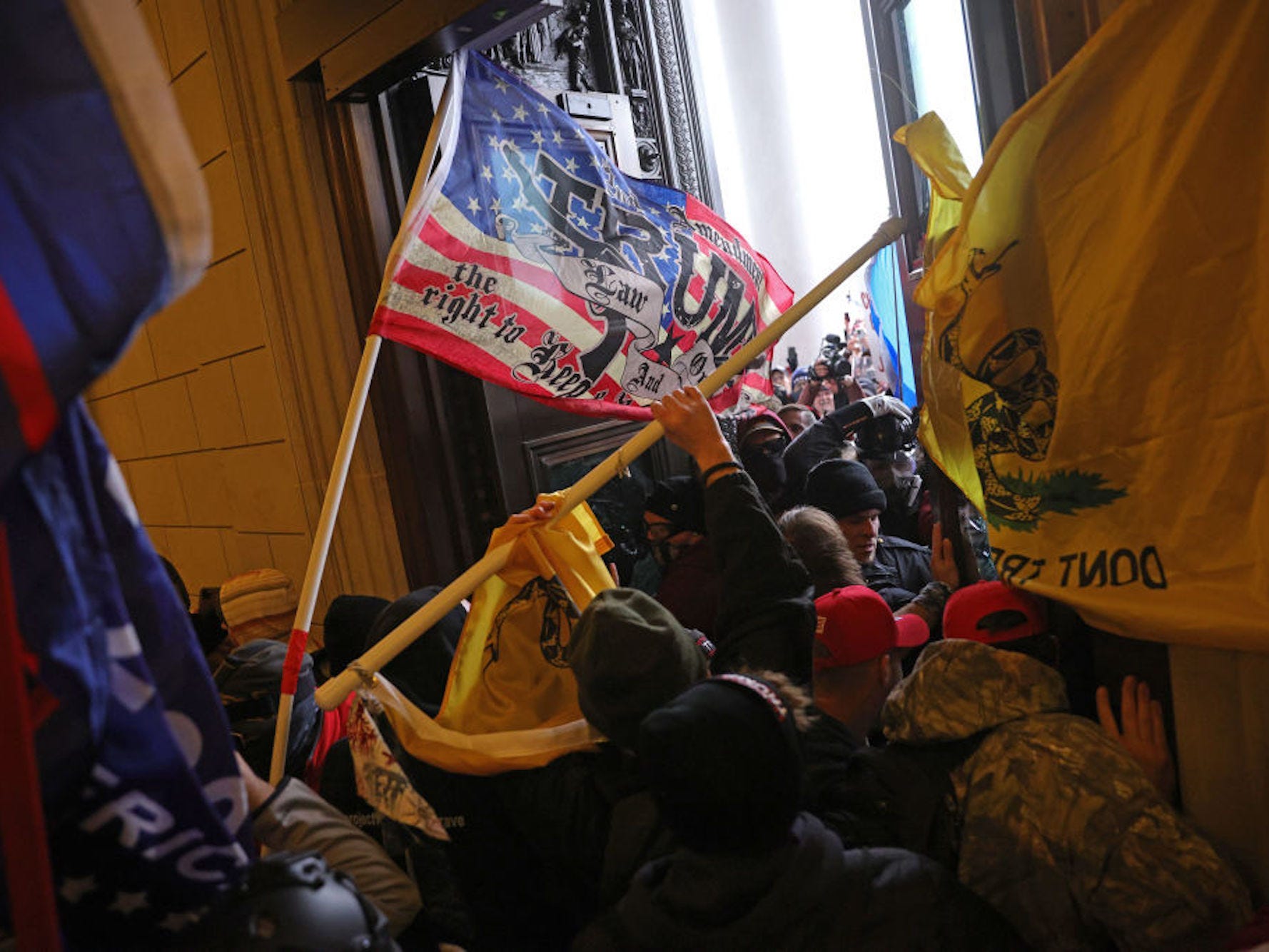 Trump on Wednesday had addressed a crowd of supporters in Washington DC who had gathered to protest against the certification of Biden’s win as it was conducted by lawmakers in the US Capitol.

In a speech, he alleged the election was being stolen from him and told supporters to “walk down to the Capitol” and that “you will never take back our country with weakness.”

Supporters then attacked the Capitol, clashing with police and breaking through police lines to enter. This prompted the evacuation of lawmakers who had gathered to certify Biden’s win.

Once inside, supporters ransacked offices and breached the Senate chamber itself, some wearing far-right insignia and carrying Confederate flags.

Biden had urged Trump to address the nation and condemn the violence as it unfolded Wednesday, and Trump released a short, ambiguous video.

The president called for peace but also repeated the baseless election fraud conspiracy theories and declared his “love” for the rioters.

After again repeating the election fraud conspiracies in a succession of tweets in which he did not condemn the rioters, his account was locked by Twitter, which said he was inciting further violence. Facebook imposed a similar ban.

After rioters were cleared from the building, lawmakers in the early morning returned and certified Biden’s win.

According to reports, some members of Trump’s cabinet are discussing invoking the 25th Amendment to remove Trump from office before Biden’s inauguration in a fortnight.