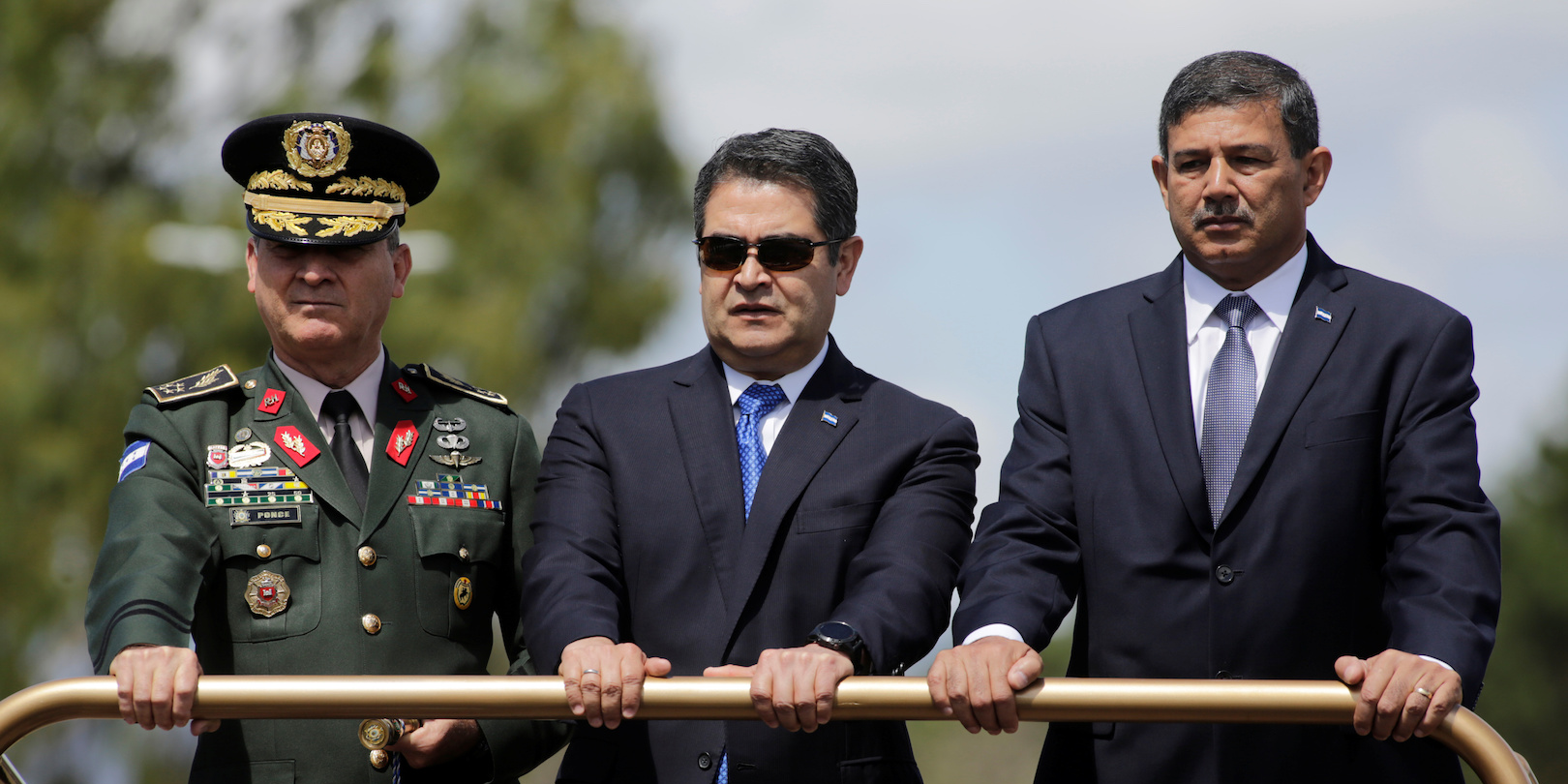 Despite allegations that both presidents have dipped their hands deep into the well of criminality and international drug trafficking, only one has been championed as one of the US’s most formidable allies in Latin America.

Honduras and Venezuela both play extremely crucial roles in the drug trade. The former as a transshipment point for US-bound cocaine shipments – and now also potentially as a cocaine producer – and the latter as a departure point for aircraft stuffed with Colombian cocaine, though less so in recent years. 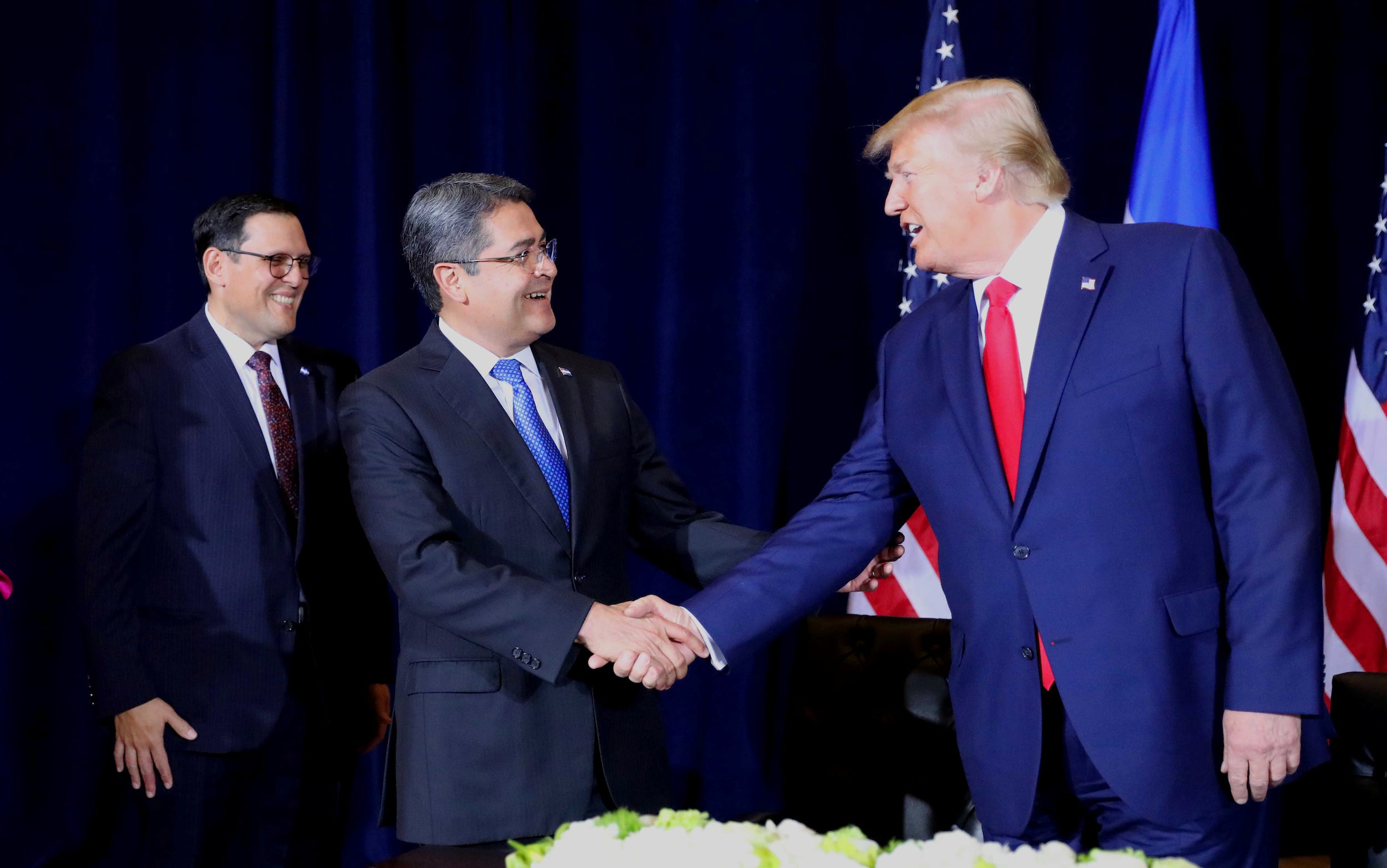 Presidency Honduras/HandoutHernandez with Trump at the signing of an immigration agreement, in New York, September 25, 2019.

But while the US has gone on the offensive in an effort to remove Maduro from office, indicting him and a number of his key associates on “narco-terrorism” charges in March 2020, US officials have cozied up to Hernández, brokering controversial asylum agreements with him,posing for photographs alongside him during military parades, and claiming his administration is a “reliable partner” in the fight against organised crime.

The evidence suggests otherwise. Hernández’s apparent ties to the criminal world were put on stark display during the 2019 trial of his brother, former congressman Juan Antonio “Tony” Hernández. Tony was convicted of leveraging Juan Orlando’s ascent through Honduran politics to run a sophisticated international drug-trafficking ring for more than a decade.

During the trial, stories emerged of drug traffickers like Devis Rivera Maradiaga of the powerful Cachiros clan working with Tony and apparently relying on his brother’s connections to the highest levels of political power to facilitate their drug trafficking operations, as well as how the now jailed former kingpin Joaquín Guzmán Loera, aka “El Chapo,” allegedly delivered a $US1 million bribe to Tony to support his brother’s 2013 presidential campaign in exchange for protecting the Sinaloa Cartel’s use of the country to traffic drugs. 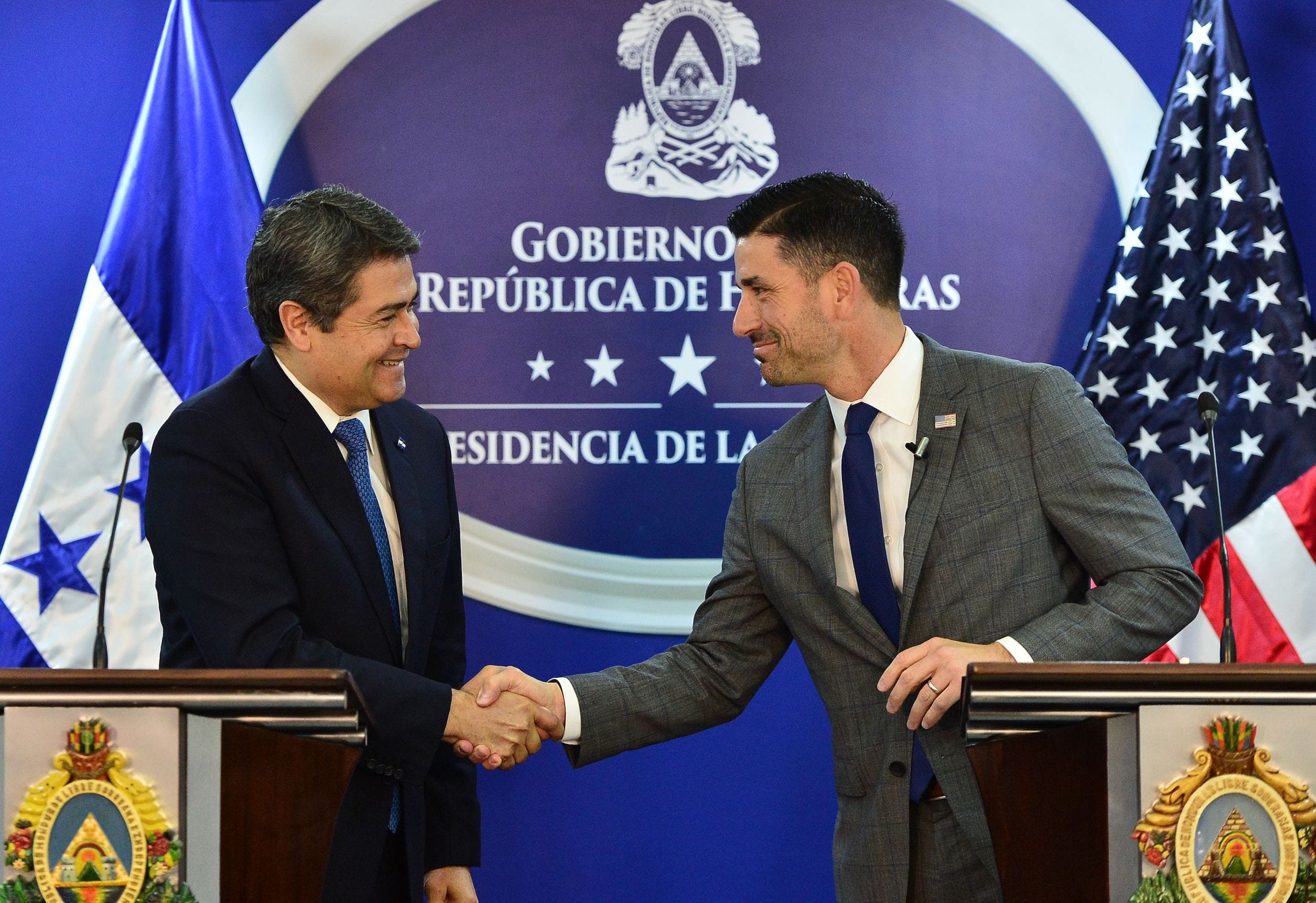 The president has consistently denied such claims, calling them “absurd and ridiculous.” But the accusations don’t end there. To make matters worse for Hernández, since his brother’s trial ended, US authorities have arrested a number of traffickers linked to Tony’s network.

Honduran drug trafficker Geovanny Daniel Fuentes Ramírez was arrested in March 2020. Prosecutors allege that Tony and Juan Orlando protected a drug lab nestled along a strategic stretch of Honduras’ Caribbean coast that was run by Fuentes and able to produce between 300 and 500 kilograms of cocaine a month.

Two Guatemalan drug traffickers arrested in June 2020, Otto and Ronald Salguero, were identified by former El Paraíso mayor Alexander Ardón, a key witness in the case against Tony, as being present during a meeting at Ardón’s home when El Chapo allegedly delivered to Tony the million-dollar cash bribe intended for the president.

But long before this information came out in court and related charging documents, the US was well aware of Hernández’s shady ties, despite acting oblivious to the allegations. 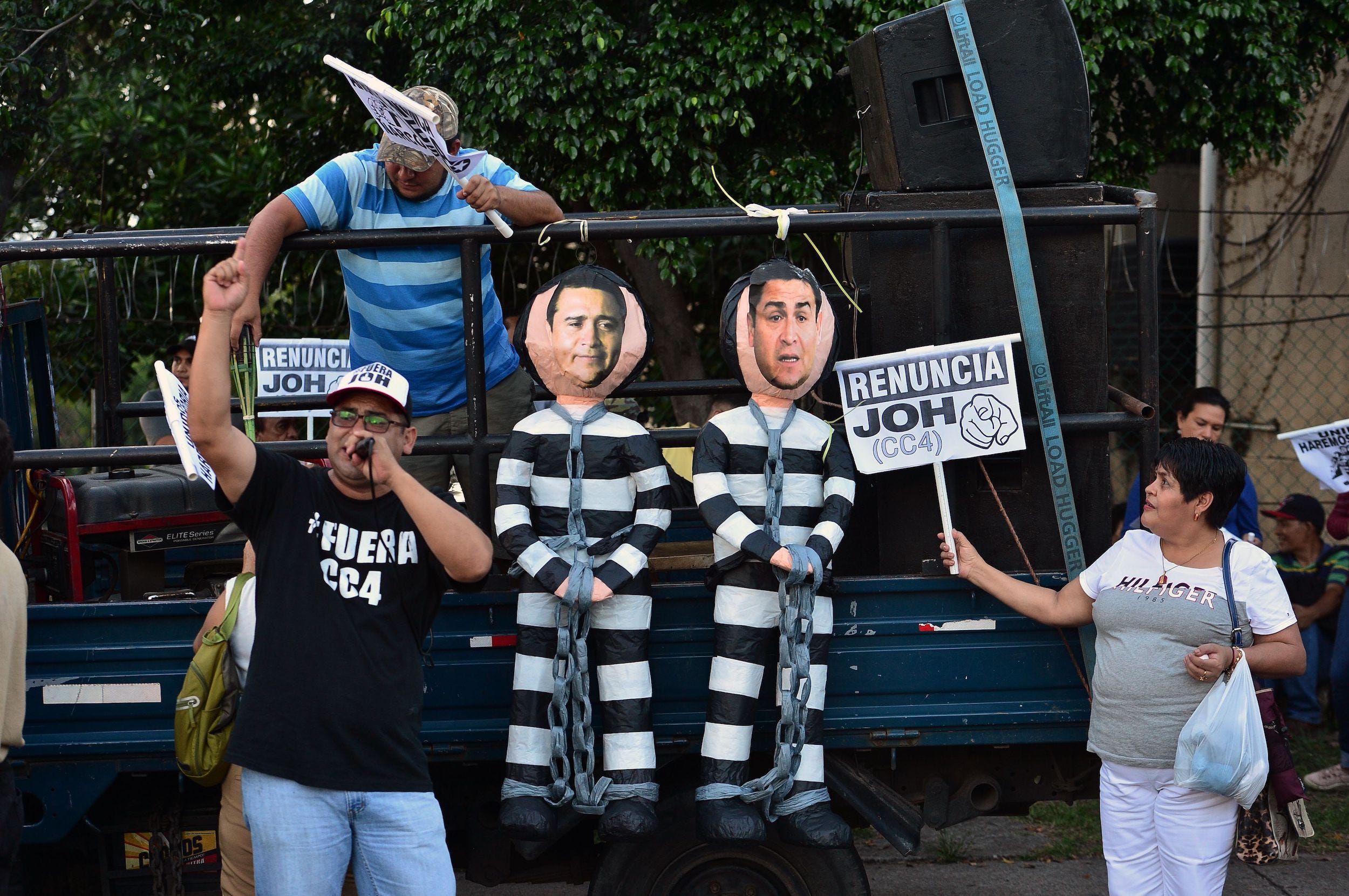 ORLANDO SIERRA/AFP via Getty ImagesOpposition supporters demonstrate against Hernandez (JOH) with dummies depicting him as a prisoner, in Tegucigalpa, October 25, 2019.

In 2015, for example, he admitted that companies linked to a massive multimillion-dollar corruption scandal had in part funded his successful 2013 bid for the presidency. It didn’t matter.

Years later, in 2017, Hernández upended a constitutional ban on reelection to run for president again. He eventually declared victory, with the US government’s blessing, despite a number of irregularities, including accusations of voter fraud, which prompted calls for new elections.

Nonetheless, consecutive US governments, and President Donald Trump most recently, have looked the other way. Shortly after Tony’s drug-trafficking conviction last year, Trump praised Hernández for “working with the United States very closely” and for his help “stopping drugs at a level that has never happened.”

In Venezuela, Maduro hasn’t been as lucky. The US has applied constant pressure through harsh sanctions from the US Treasury Department’s Office of Foreign Assets Control (OFAC) against a growing list of individuals, in addition to indicting several of Maduro’s key allies on a range of criminal charges and officially recognising Juan Guaidó as the rightful leader of the South American nation. 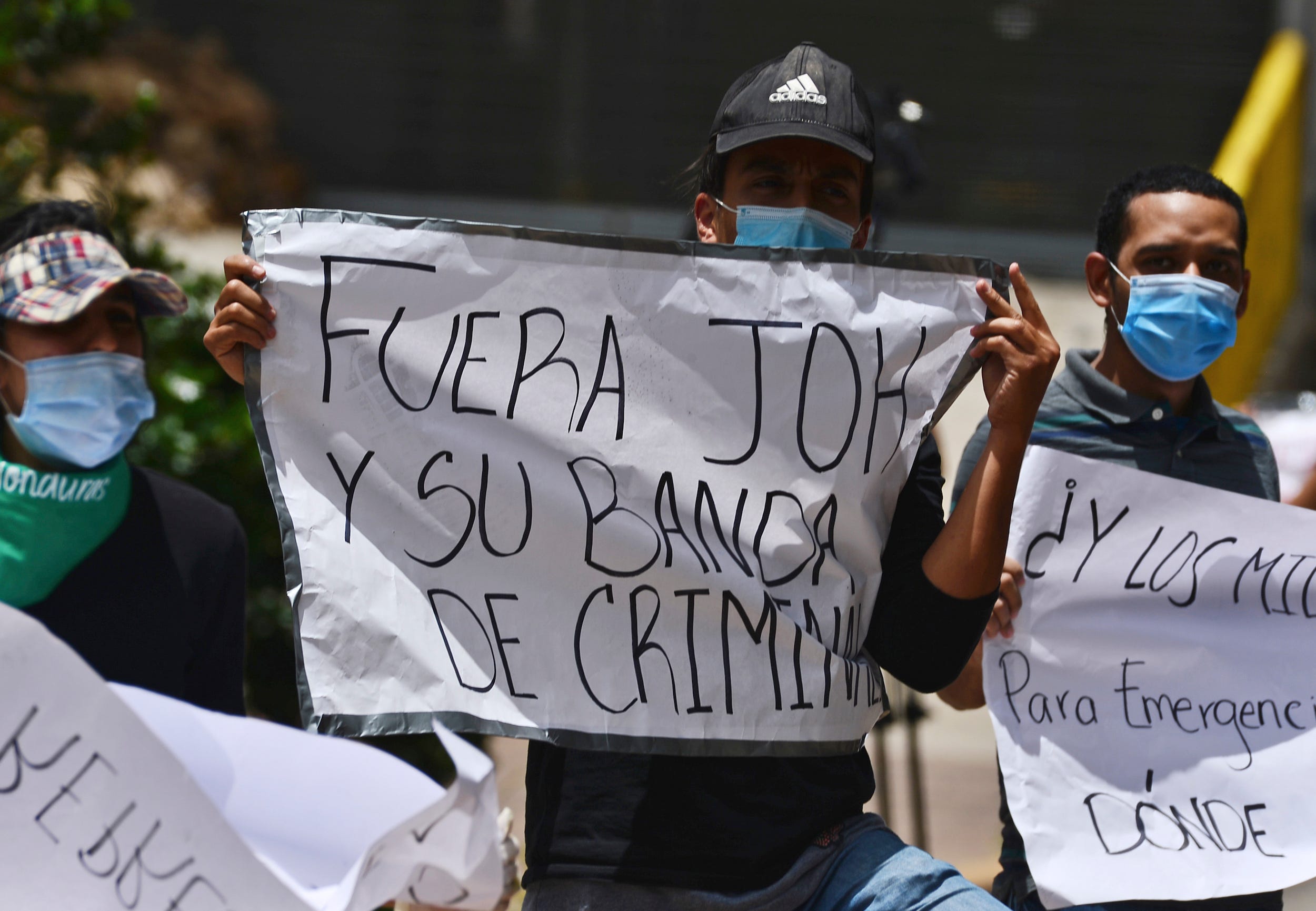 This isn’t to say that Maduro deserves any special treatment. The embattled leader has helped plunge Venezuela into vast economic, social, and political crises, pushing millions of desperate families to flee across the region in search of stability and better opportunities.

But the contrast between the US’s interactions with Hernández and with Maduro raises serious questions about who the US government is willing to do business with.

Maduro has tried and failed to champion the leftist ideals of a Bolivarian revolution pushed by his late predecessor, Hugo Chávez – also a US foe.

But in Honduras, Hernández has consistently bowed to US pressure, embracing neo-liberal economic reforms and other initiatives that followed the US-backed 2009 coup d’état, which ousted then-democratically elected President Manuel Zelaya and ushered in three consecutive right-wing National Party administrations.

For now, Hernández has presidential immunity and is untouchable. But when he leaves office in 2022, US prosecutors seem to have plenty of evidence and witnesses willing to testify if they want to indict him.

Parker Asmann is a journalist who writes about human rights, security policy, and organised crime across Latin America and the Caribbean.