'Explosions of bullshit': Trump repeatedly lied to his supporters about the election in a raucous speech outside the White House 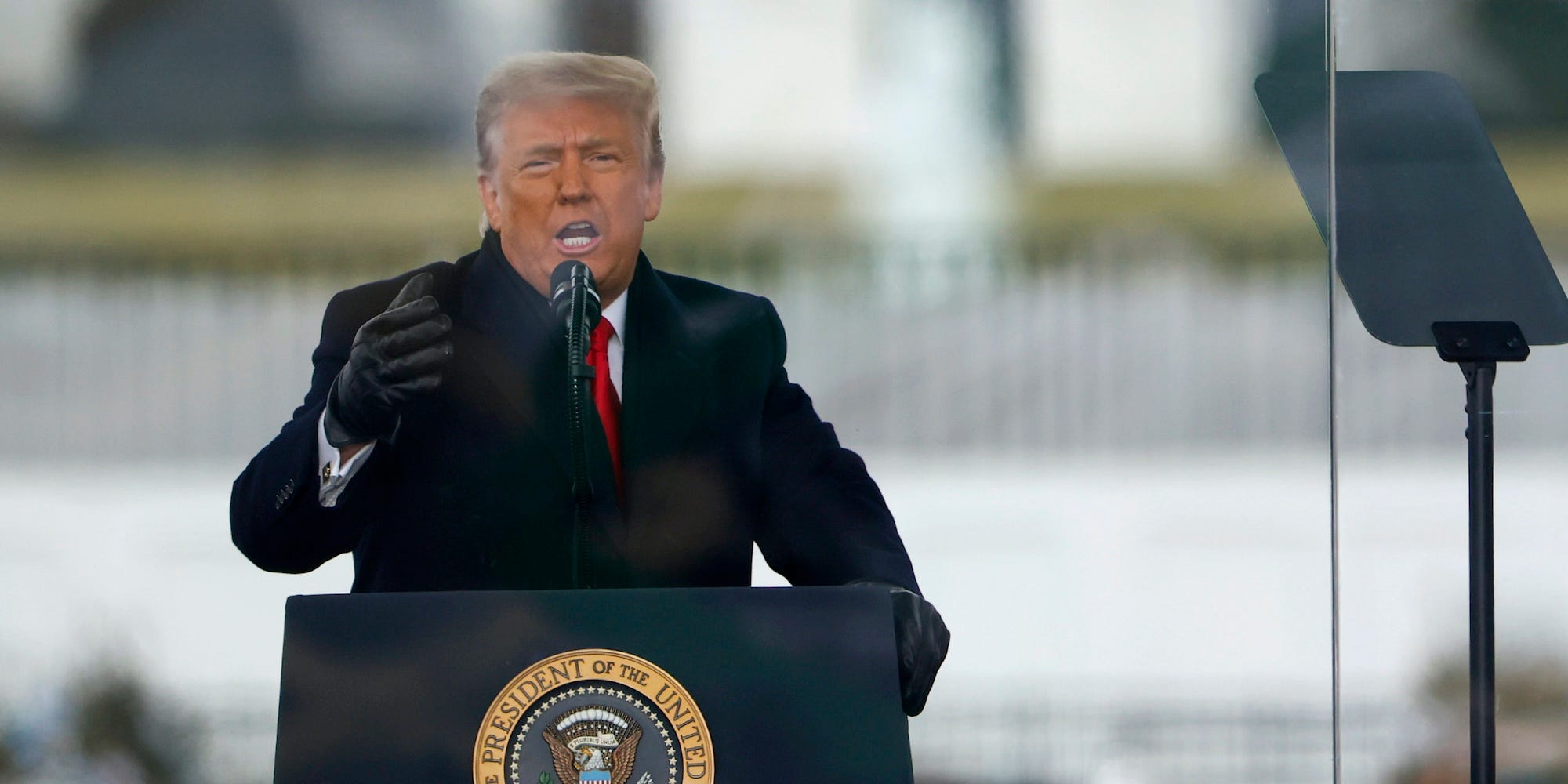 Tasos Katopodis/Getty ImagesPresident Donald Trump speaks at the ‘Stop The Steal’ Rally on January 06, 2021 in Washington, DC. Trump supporters gathered in the nation’s capital today to protest the ratification of President-elect Joe Biden’s Electoral College victory over President Trump in the 2020 election.

With thousands of protesters flooding the streets of the nation’s capital, President Donald Trump delivered a speech in the Ellipse outside the White House on Wednesday.

The president’s speech was a masterclass in demagoguery. He repeatedly lied to thousands of his supporters who travelled to Washington, DC, to protest the final step in certifying the 2020 election result and President-elect Joe Biden’s victory.

“If Mike Pence does the right thing, we win the election … He has the absolute right to do it,” Trump said, repeating the false assertion that the vice president can singlehandedly overturn the result of the presidential race.

Trump referred to the counting of ballots in the 2020 election as “explosions of bullshit,” prompting laughter and cheers from the crowd.

“We will never give up, we will never concede. You don’t concede when there’s theft involved,” Trump said, though there’s no evidence to substantiate his allegations. Trump at another point also falsely suggested that Biden will be an “illegitimate” president.

The president’s rambling remarks on Wednesday were utterly at odds with reality. “We won the election and won it by a landslide,” Trump, who lost to Biden by more than 7 million votes, falsely stated.

The president repeatedly claimed to have evidence he won the election, but never actually presented any credible information to back up his erroneous assertions. He pushed a slew of previously debunked claims, such as suggesting there were more ballots than voters in certain states and that “thousands” of dead people voted.

Trump describes the counting of votes as "explosions of bullshit." His fans respond by chanting, "bull-shit!" pic.twitter.com/ggc7VQNkQw

The president also used the speech as an opportunity to praise Republicans who’ve enabled his effort to disenfranchise millions of voters, and decry those who’ve refused to sign on.

“Brian Kemp, vote him the hell out of office,” Trump said of the Republican governor of Georgia.

Trump trailed off onto other subjects at various points during his remarks, including the border wall and the president-elect’s son, Hunter Biden, in a speech that marked one of the most desperate moments in the president’s futile effort to cling to power.

Though Trump suggested more than once that he would march to Capitol Hill with his supporters, he returned to the White House after his speech. Meanwhile, the president’s supporters clashed with police and tried to storm the Capitol building, as multiple buildings on the Hill were evacuated.

The speech came shortly before Congress was set to certify the Electoral College vote, which a number of GOP lawmakers in both chambers have vowed to challenge.

There were weekslong concerns about what might unfold in Washington, DC, on January 6, with the Proud Boys, a far-right extremist group, planning a rally and Trump continuing his anti-democratic fight to stay in power.

With roughly two weeks left in office, Trump still has not conceded to Biden. The president has baselessly contended that he lost due to mass voter fraud. There’s no evidence backing up Trump’s unfounded assertions, and the president and his GOP allies have won none of their dozens of election-related lawsuits.

The president has taken an increasingly authoritarian tone in his final days as he’s pushed for the outcome of the 2020 election to be overturned, and many Republican lawmakers have enabled his attacks on American democracy.

During an extraordinary phone call on Saturday, Trump pressured Georgia’s Secretary of State Brad Raffensperger to “find” 11,780 votes in order to flip the election in his favour. The call sparked outrage among Democrats and the limited number of Republicans in Washington, DC, willing to openly oppose Trump.

Meanwhile, Trump has thrown Pence under the bus by falsely claiming he can unilaterally overturn the election result when Congress meets to certify the Electoral College vote. In doing so, Trump has made Pence a scapegoat for his election loss.

As Trump was still speaking on Wednesday, Pence released a statement that signalled he would not adhere to the president’s wishes during the certification of the Electoral College vote.

“It is my considered judgment that my oath to support and defend the Constitution constrains me from claiming unilateral authority to determine which electoral votes should be counted and which should not,” Pence said.

On the eve of the Electoral College certification, Democrats won a major victory in the Georgia Senate runoff. Democratic candidates Raphael Warnock and Jon Ossoff defeated Republican incumbent Sens. Kelly Loeffler and David Perdue respectively, giving Democrats a majority in the Senate for the first time in six years.

Trump has effectively torched the GOP in his short but chaotic tenure, with the party losing the House, Senate, and White House under his leadership. But Wednesday’s events in Washington, DC, reveal Trump’s enduring influence and serve as a reminder of his popularity with millions of voters nationwide, in spite of his tumultuous presidency.