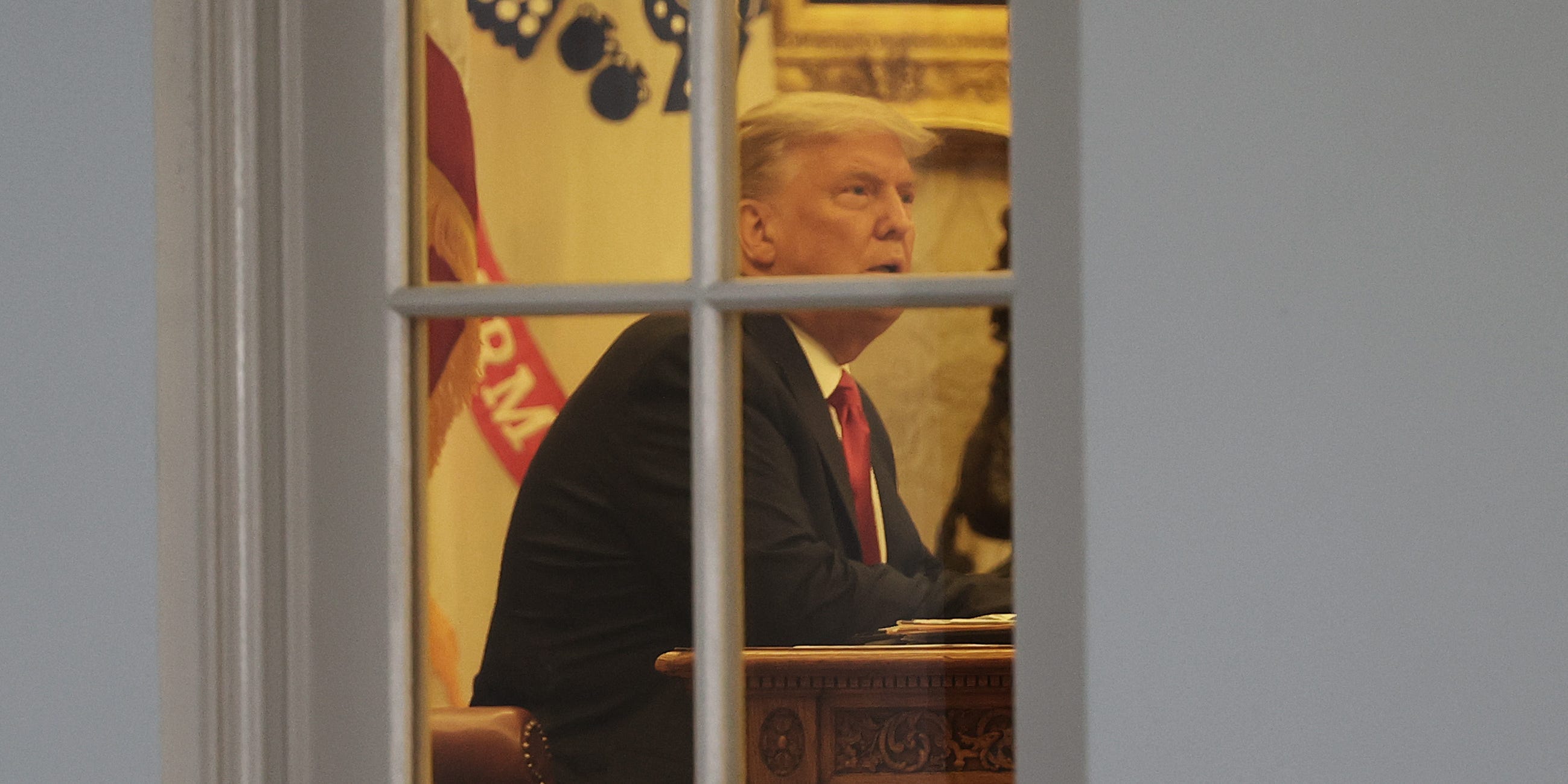 Tasos Katopodis/Getty ImagesPresident Donald Trump sits in the oval Office after speaking about Operation Warp Speed in the Rose Garden on November 13, 2020.

Alongside disputing the 2020 election results and refusing to concede to President-elect Joe Biden two weeks after losing, President Donald Trump has resumed firing senior officials in rapid succession on Twitter.

In what appears to be a post-election purge of anyone the president deems disloyal, at least 12 people have been sacked or have resigned from the Trump administration since November 3. Most of them worked in national security, and critics worry that the shakeup and any further actions by Trump may pose risks to the federal government during an uncertain transition period.

The president’s most recent dismissal was cybersecurity chief Chris Krebs, who’d been responsible for overseeing election security and repeatedly challenged Trump’s unfounded claims that the race was stolen from him due to voter fraud. Trump booted the director of DHS’s Cybersecurity and Infrastructure Security Agency via Twitter on Tuesday, which sparked outrage from Democratic lawmakers who applauded Krebs for protecting the election process in a bipartisan way. Republicans, too, frowned at the decision, in a rare pushback against Trump.

Still, Trump’s GOP allies have largely avoided commenting on his refusal to admit defeat, even though every network called the race for Biden nearly two weeks ago. Instead, they have pushed for Trump’s legal battles to be allowed to play out. So far, the president has won zero out of the nearly two dozen lawsuits filed in an effort to overturn the results. Trump has sent his campaign staff to do the on-the-ground work battling the election, while he’s resorted to airing out his grievances online.

Biden, in the meantime, has pressed along with his transition team, despite the Trump administration’s efforts to block them. The president-elect recently announced members of his incoming administration, including chief of staff Ron Klain, and several other White House appointees.

Here are the officials that have left their Trump-appointed positions since the election:

Trump fired Chris Krebs, director of CISA, after the agency released a statement that called the 2020 election “the most secure in American history.” Krebs reacted to his departure in a tweet: “Honoured to serve. We did it right.”

John McEntee, director of the White House Presidential Personnel Office, requested resignation letters fromBryan Ware, assistant director for cybersecurity at CISA and Valerie Boyd, assistant secretary for international affairs at DHS. The Washington Post reported that the administration pushed out the two officials as part of an effort to remove anyone who hasn’t been sufficiently loyal to the president.

A slew of top Pentagon officials left their posts, just one day after Trump fired Defence Secretary Mark Esper. That list included his chief of staff Jen Stewart, deputy chief of staff Alexis Ross, Undersecretary of Defence for intelligence and security Joseph Kernan, and acting Undersecretary of Defence for policy James Anderson. They have been replaced by a crew of Trump loyalists. Anderson previously clashed with the White House when it tried to hire controversial figures, Politico reported, yet he did not clarify reasons for leaving in his resignation letter.

Trump fired Defence Secretary Mark Esper on Twitter and replaced him with National Counterterrorism Centre Director Christopher Miller. The president did not say why he made the move, yet for months there had been talks to remove the top Pentagon official, who opposed Trump’s decision to deploy active-duty troops to quell national protests over racial injustice.

Lisa Gordon-Hagerty, head of the National Nuclear Security Administration, which is responsible for safeguarding the nation’s nuclear weapons, resigned. Defence News reported that her decision likely occurred because of nearly a year’s worth of clashes with Trump’s Energy Secretary Dan Brouillette.

Bonnie Click, deputy administrator of US Agency for International Development,was also forced out. The White House sent her a letter that she needed to resign by 5 p.m. otherwise she’d be terminated without cause, sources told CNN. She had no intentions to leave, yet that evening the agency announced her replacement.