All the Trump officials who have voted by mail 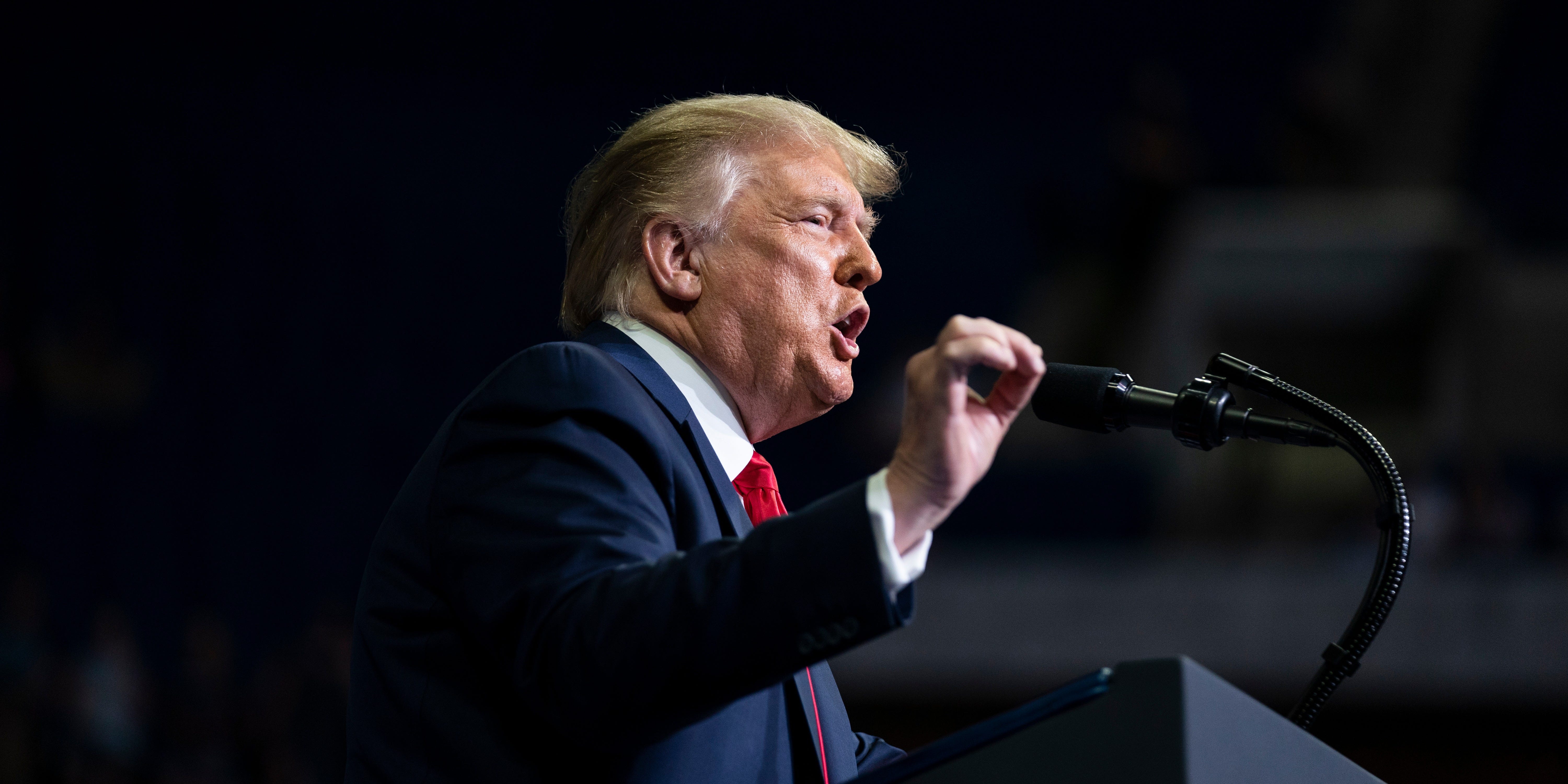 President Donald Trump is ramping up his crusade against states’ efforts to make voting by mail more accessible, but nearly two dozen members of Trump’s family, administration, and campaign officials in his orbit have voted or tried to vote with mail ballots in the past decade.

In June, Insider’s Tom LoBianco reported that Vice President Mike Pence and Second Lady Karen Pence are still registered to vote at the Indiana Governor’s mansion, where they haven’t lived in nearly four years, and just recently voted absentee in Indiana’s presidential primary election this spring. (While unusual, a legal expert told Insider that the Pences continuing to vote in Indiana is not illegal or fraudulent).

Tom Bonier, a veteran Democratic strategist and political data analyst who frequently works with state-level voter files and databases of voter information, told Insider that he identified several officials who have cast mail-in ballots over the past decade, some of which he included in a lengthy April Twitter thread.

As of now, seven states and the District of Columbia are set to send every voter a mail-in ballot for November’s election, and 35 more states will allow voters to request a mail-in ballot without an excuse, according to a Washington Post analysis.

In recent months, Trump has falsely claimed that an expansion of absentee and mail-in voting will lead to fraud and corruption (in reality, rates of absentee ballot fraud are very low), that expanding mail-in voting hurts Republicans (it confers no partisan advantage to either side), and raised baseless conspiracy theories that children in California will go around stealing ballots out of mailboxes and forging them, that postal workers will steal ballots, and that foreign countries will mail counterfeit ballots to voters and election offices.

In response to critical coverage of Trump’s remarks on absentee and vote by mail, some administration and campaign advisors have tried to distinguish between “legitimate absentee voting” for people away from their homes, which they see as a valid excuse, and a system of states pre-emptively sending a ballot to everyone, which they claim to see as increasing the chances of fraud.

Trump, however, often does not distinguish between the two in his remarks and, in sweeping terms, has demonized the entire concept of mail-in ballots, including threatening to cut federal funding to Michigan over the state’s top election official Jocelyn Benson moving to send every registered voter an absentee ballot application.

The sheer number of Trump advisors and campaign officials who have taken availed themselves of absentee and mail-in voting across several states over the past decade undercuts Trump’s own argument that mail-in ballots are fundamentally vulnerable to fraud and corruption, and has led critics to accuse Trump of hypocrisy.

Here are the Trump family members, administration and campaign officials, and other staffers in Trump’s orbit who have been reported to have recently voted absentee or mail: Trump voted absentee in 2018 in New York, where he lived at the time and was registered to vote at his former Manhattan residence in Trump Tower.

Trump also voted by mail this March in his new home state of Florida, where he is now registered to vote in Palm Beach County. Florida allows any voter to cast a mail-in ballot without an excuse and has comparatively high levels of mail-in voting compared to other states.

The South Florida Sun-Sentinel reported that a Trump representative picked up Trump’s ballot about a week before the election and returned it to the Palm Beach County Elections Office the day before the primary. 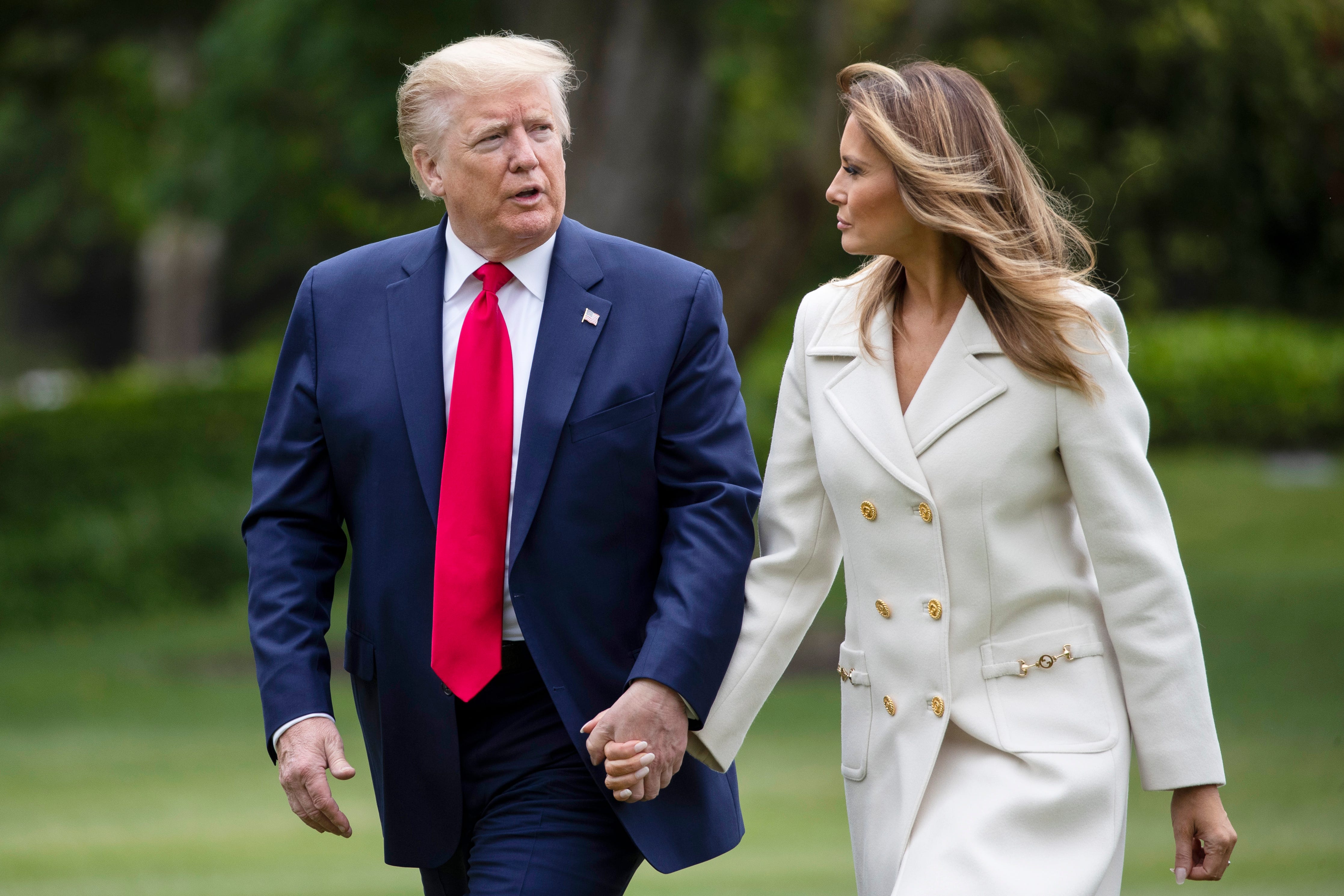 Associated PressFILE – In this May 25, 2020 photo, President Donald Trump, accompanied by first lady Melania Trump, walks as they return on Marine One on the South Lawn of the White House in Washington, after returning from Fort McHenry National Monument and Historic Shrine, in Baltimore, for a Memorial Day ceremony. (AP Photo/Alex Brandon)

Like Trump, the First Lady also cast a mail-in ballot in Florida’s Republican primary this March.

The New York Daily News reported that she also tried to vote absentee in New York City’s 2017 mayoral election, but her vote wasn’t counted because she failed to properly sign the envelope containing her ballot.

Ivanka Trump and Jared Kushner tried to vote absentee in 2017 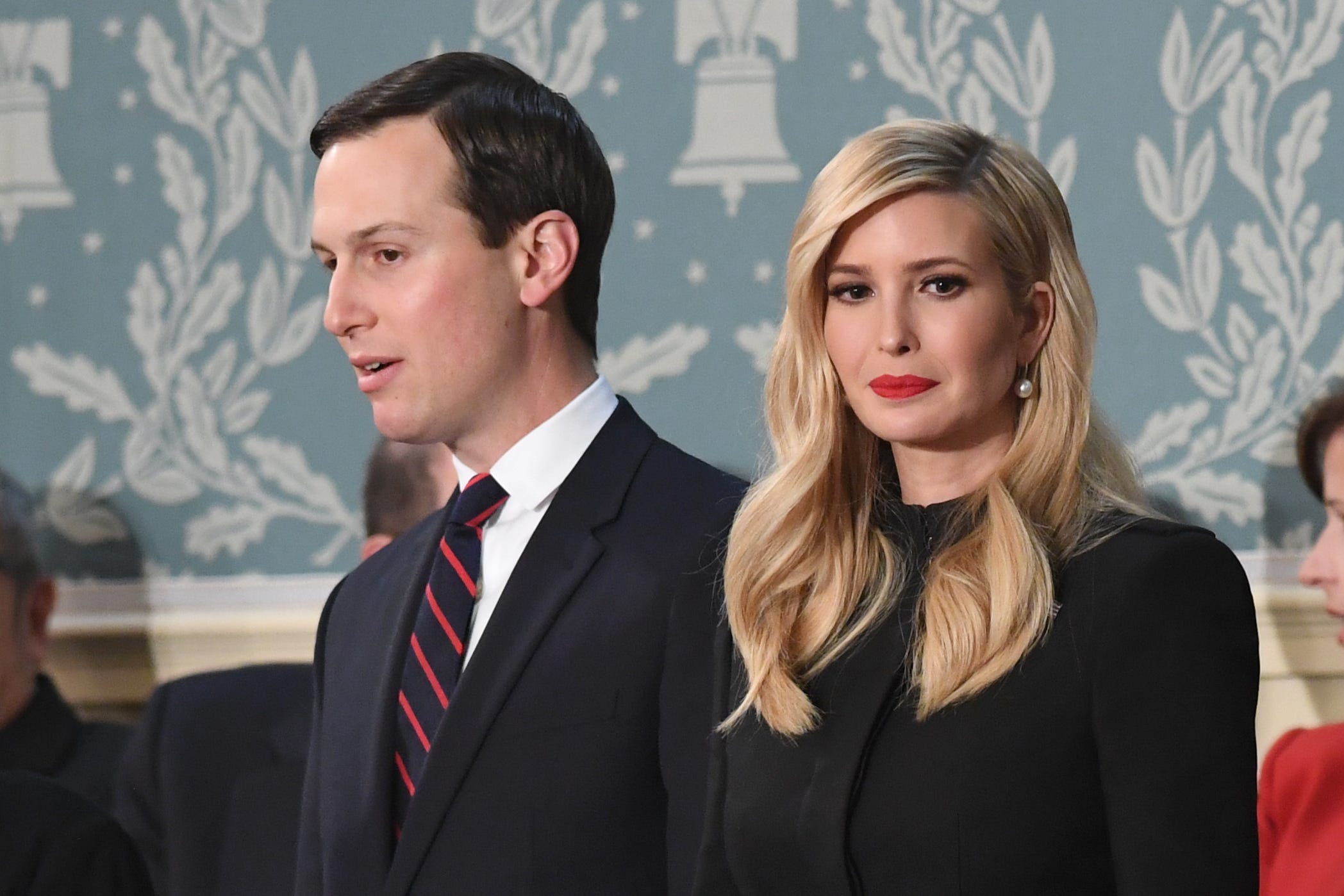 Ivanka, however, mailed her absentee ballot in too late for it to be properly counted, the city’s Board of Elections told the Daily News.

And while Kushner requested an absentee ballot for that election, he failed to send it in.

In 2017, the Washington Post reported that Kushner was simultaneously registered to vote in both New York and New Jersey. 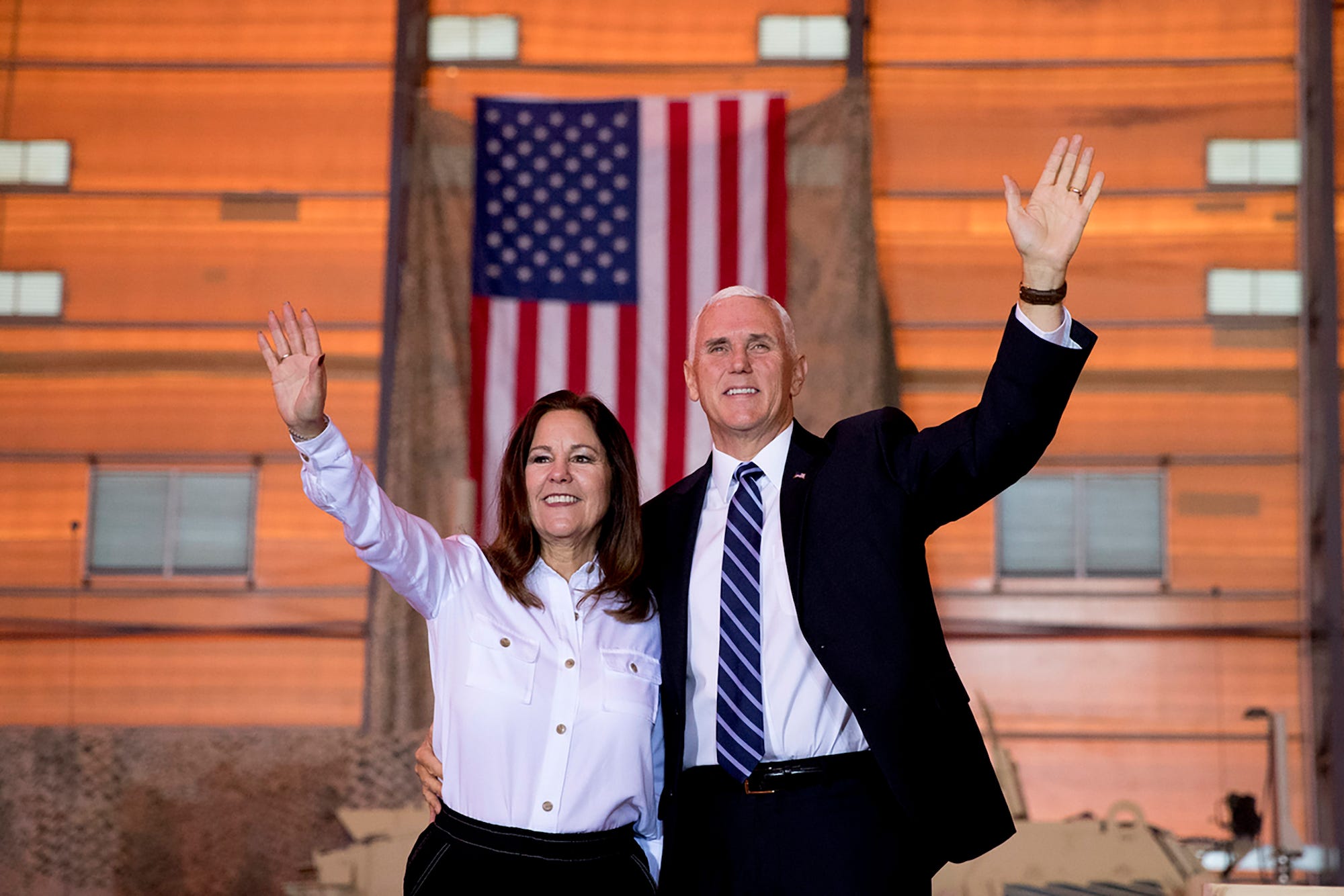 Associated Press/Andrew HarnikVice President Mike Pence and his wife Karen Pence wave as they take the stage to speak to troops at Al Asad Air Base, Iraq, Saturday, Nov. 23, 2019.

The Pences are still registered to vote at their old address, the Indiana Governor’s Mansion, which they haven’t lived in for almost four years.

Both the Vice President and Second Lady cast absentee ballots at that address in the 2018 primary and general elections and in the Indiana 2020 primary elections this spring, Insider’s Tom LoBianco reported. 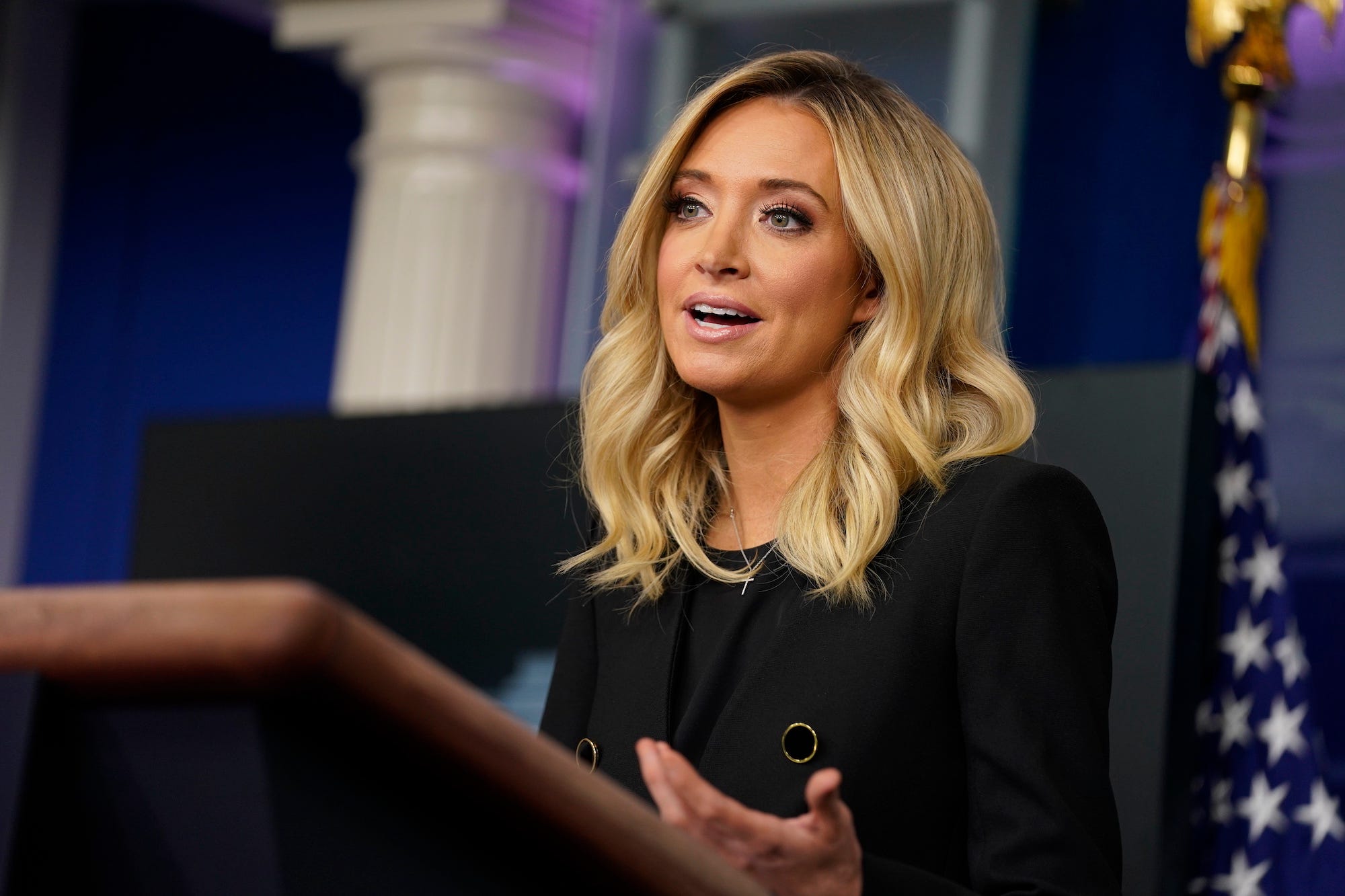 Evan Vucci/APWhite House press secretary Kayleigh McEnany speaks during a press briefing at the White House, Friday, May 1, 2020, in Washington.

McEnany has voted by mail in Florida at least 11 times over the last decade, the Tampa Bay Times reported.

In a statement to the paper, McEnany said of her voting history: “Absentee voting has the word absent in it for a reason. It means you’re absent from the jurisdiction or unable to vote in person.”

Florida, however, does not use the term “absentee” to describe their vote-by-mail program and allows anyone to vote by mail without an excuse, whether they are out of state or not.

“Vote-by-mail refers to voting a ballot received by mail or picked up by or for a voter instead of going to the polls to vote during early voting period or Election Day,” the Florida Elections Division says on its website. “Except on Election Day, no excuse is needed to vote a vote-by-mail ballot.” Parscale cast an absentee ballot to vote in the 2018 general election in Texas, CBS News reported. He told CBS that he also tried to vote absentee in the 2016 presidential election, but didn’t get his ballot in time. 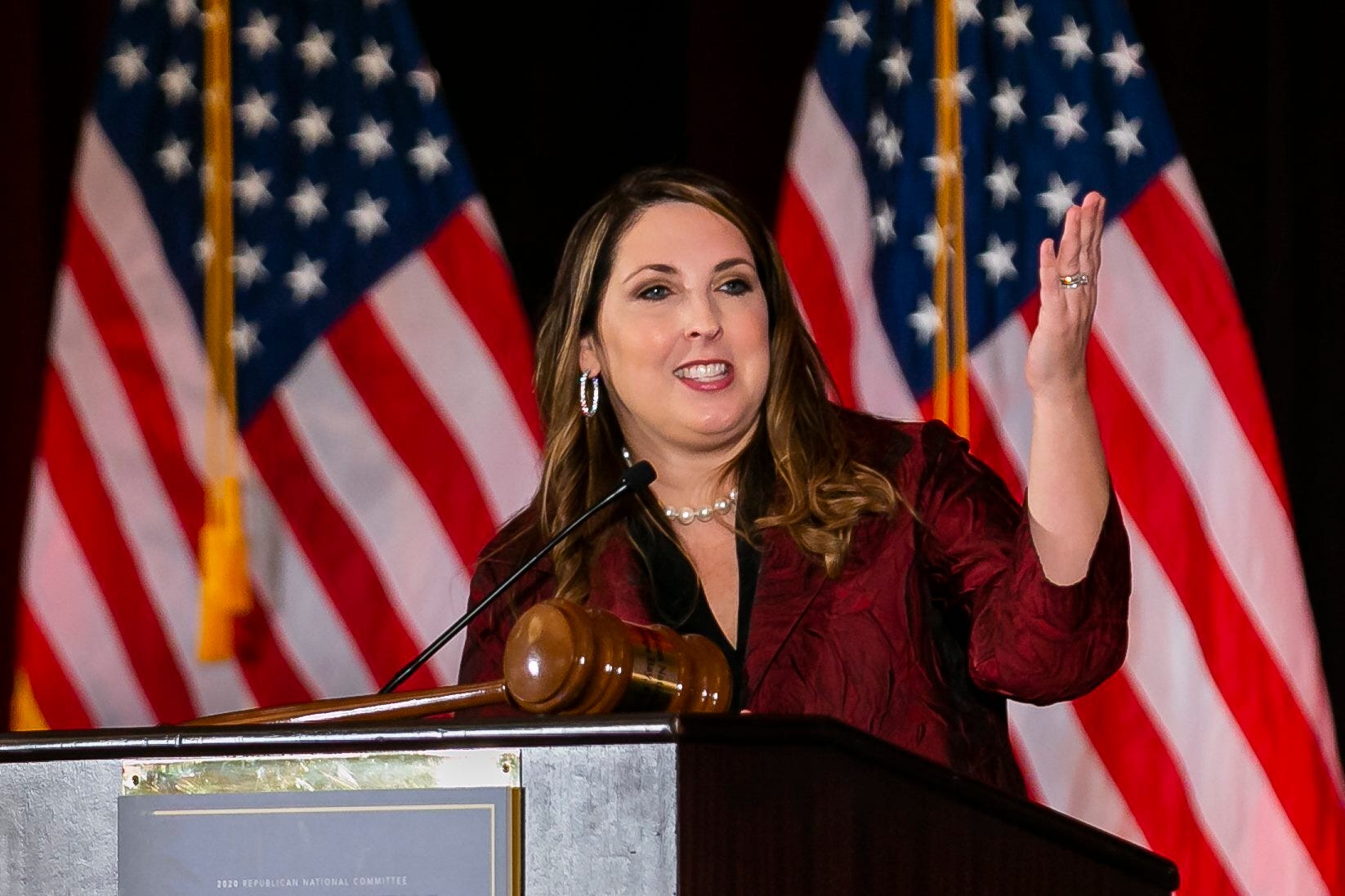 McDaniel is on the list of permanent absentee voters who receive an absentee ballot request form for every election in her home state of Michigan, the Daily Beast reported, citing public records.

McDaniel, a frequent and vocal critic of wide-scale vote by mail programs, voted absentee in 2016, 2017, 2018, and most recently in the 2020 primary elections. In 2018, Michigan voters passed a ballot initiative allowing But CNN reported in mid-July that she herself has voted by mail in 2012, 2013, and 2014 in Colorado, which has conducted its elections almost entirely by mail since 2014. 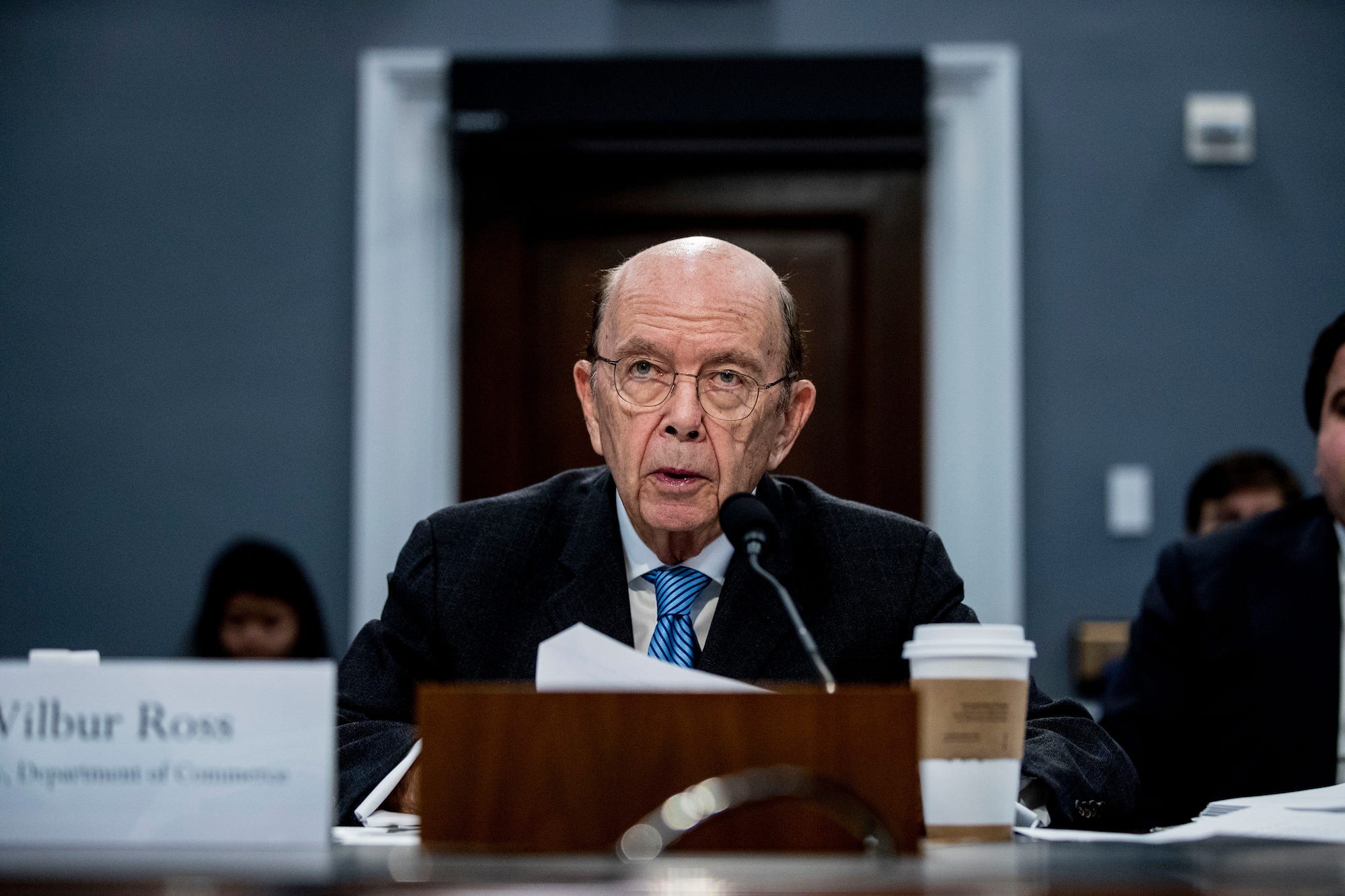 Ross has frequently voted by mail in Florida, according to Politico. He has either cast a mail-in ballot or voted early at least 15 times over the past 15 years, most recently in the state’s March 2020 primary. 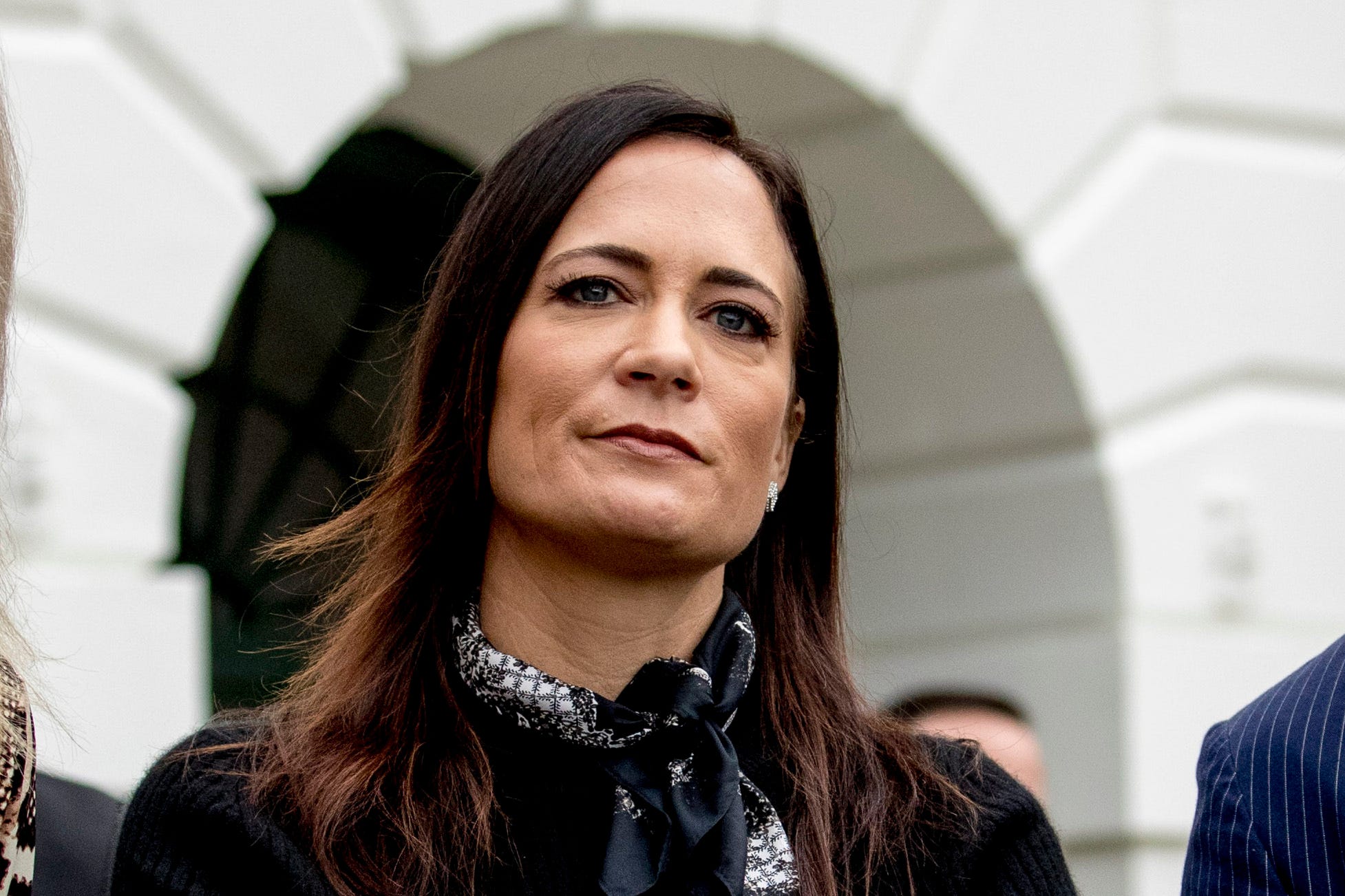 Bonier told Insider public records show that Grisham voted by mail in the 2016 presidential election in her home state of Arizona, which allows any voter to cast a mail-in ballot without an excuse. 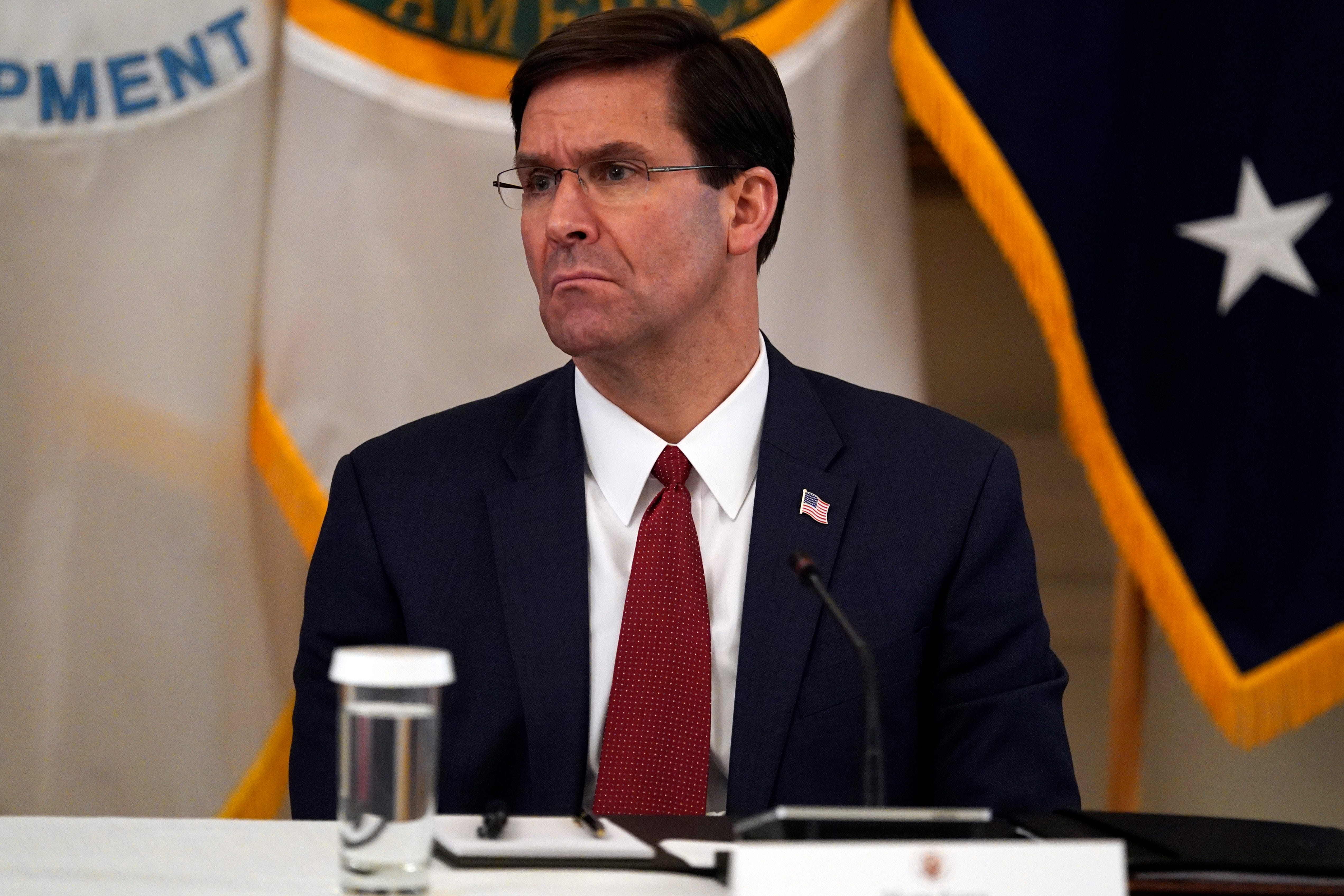 Associated PressDefence Secretary Mark Esper listens during a Cabinet Meeting with President Donald Trump in the East Room of the White House, Tuesday, May 19, 2020, in Washington. (AP Photo/Evan Vucci)

Esper, who worked as a top lobbyist at defence contractor Raytheon before joining the Trump administration, voted absentee in Virginia in 2008, 2012, and 2016, Bonier told Insider.

Virginia allows any voter to cast an absentee ballot without an excuse and to elect to vote by mail permanently. 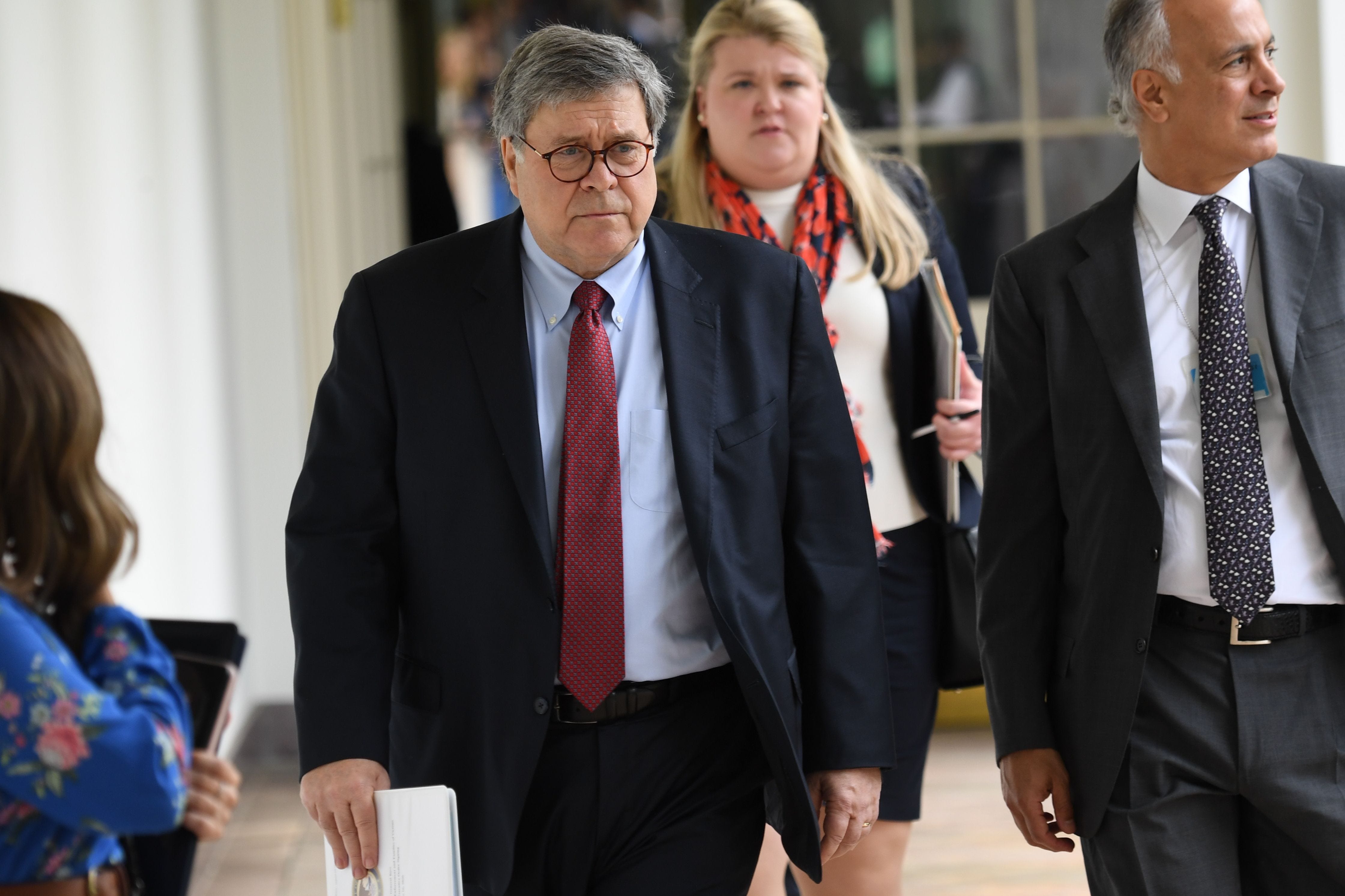 SAUL LOEB/AFP via Getty ImagesUS Attorney General William Barr arrives for the event where US President Donald Trump signs an executive order on police reform, in the Rose Garden of the White House in Washington, DC, on June 16, 2020.

Barr, also a resident of Virginia, voted absentee in the 2012 and 2019 elections, the Washington Post reported. 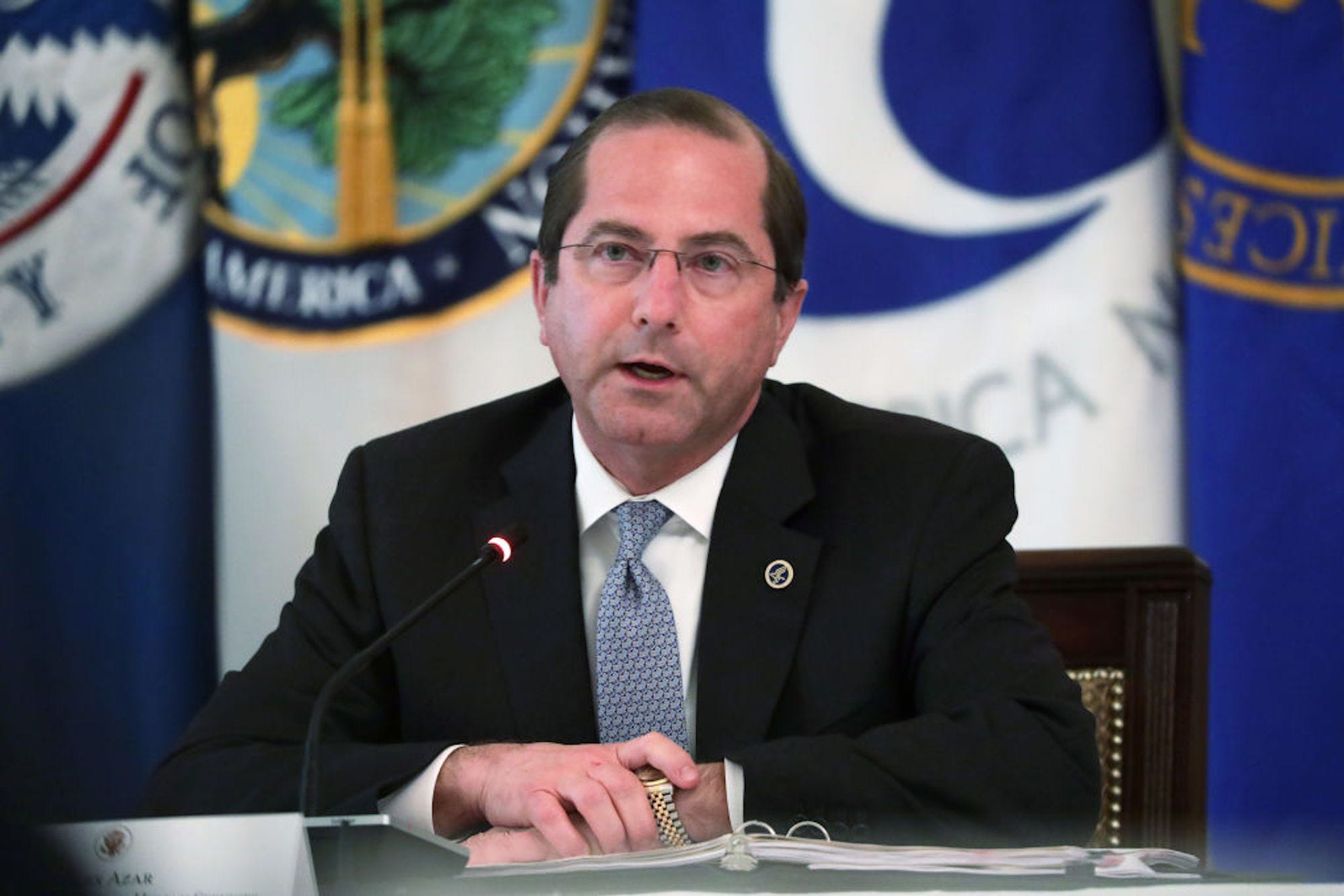 Alex Wong/Getty ImagesSecretary of Health and Human Services Alex Azar speaks during a cabinet meeting in the East Room of the White House on May 19, 2020

Like the Pences, Azar also voted absentee in his home state of Indiana in 2018. 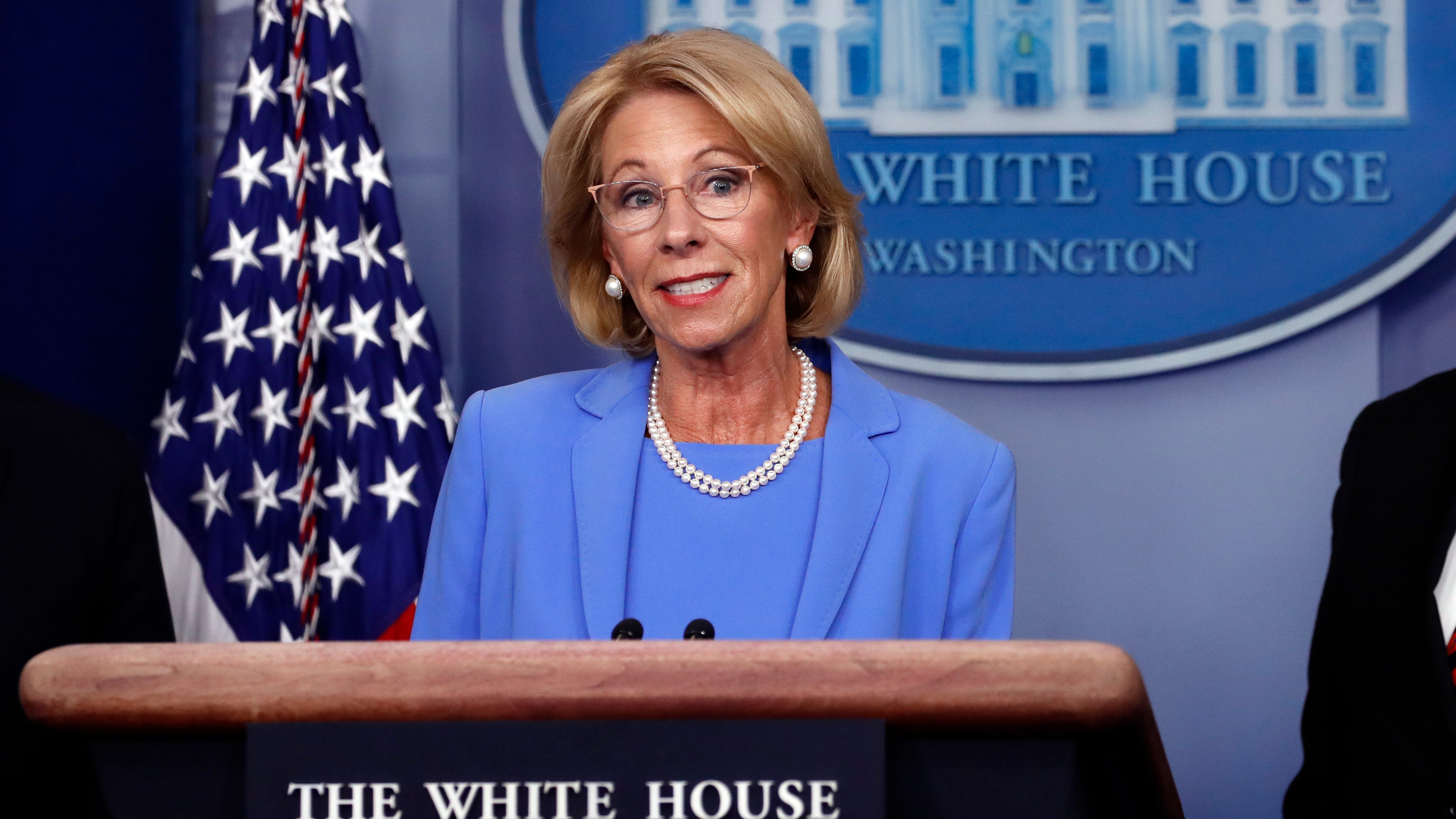 Like McDaniel of the RNC, DeVos is also on Michigan’s permanent absentee list and has voted absentee in the state “in all but three elections over the past decade,” the Associated Press reported. Ayers, Pence’s former chief of staff, has voted absentee in Georgia since 2014, the Associated Press reported. Georgia allows any voter to cast an absentee ballot without an excuse. 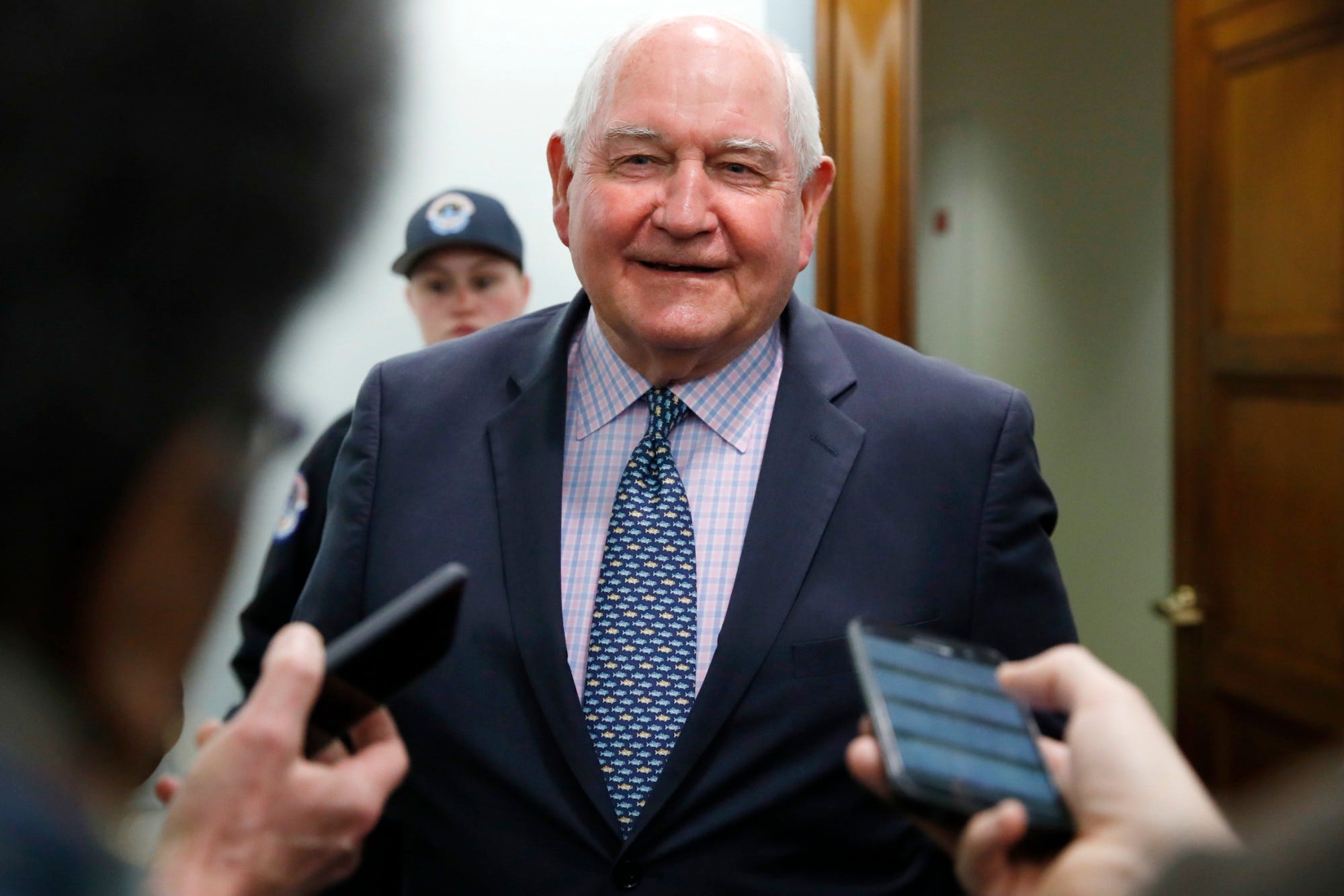 Perdue, the former governor of Georgia, signed into law a bill that allows all Georgia voters to cast an absentee ballot without an excuse back in 2006. He’s voted absentee himself in every election since then, Bonier told Insider, citing public records. Conway, a New Jersey native, voted by mail in the state’s Bergen County in the 2018 midterm elections, the Huffington Post reported.

New Jersey allows any voter to cast a mail-in ballot without an excuse and allows voters to elect to vote by mail permanently.