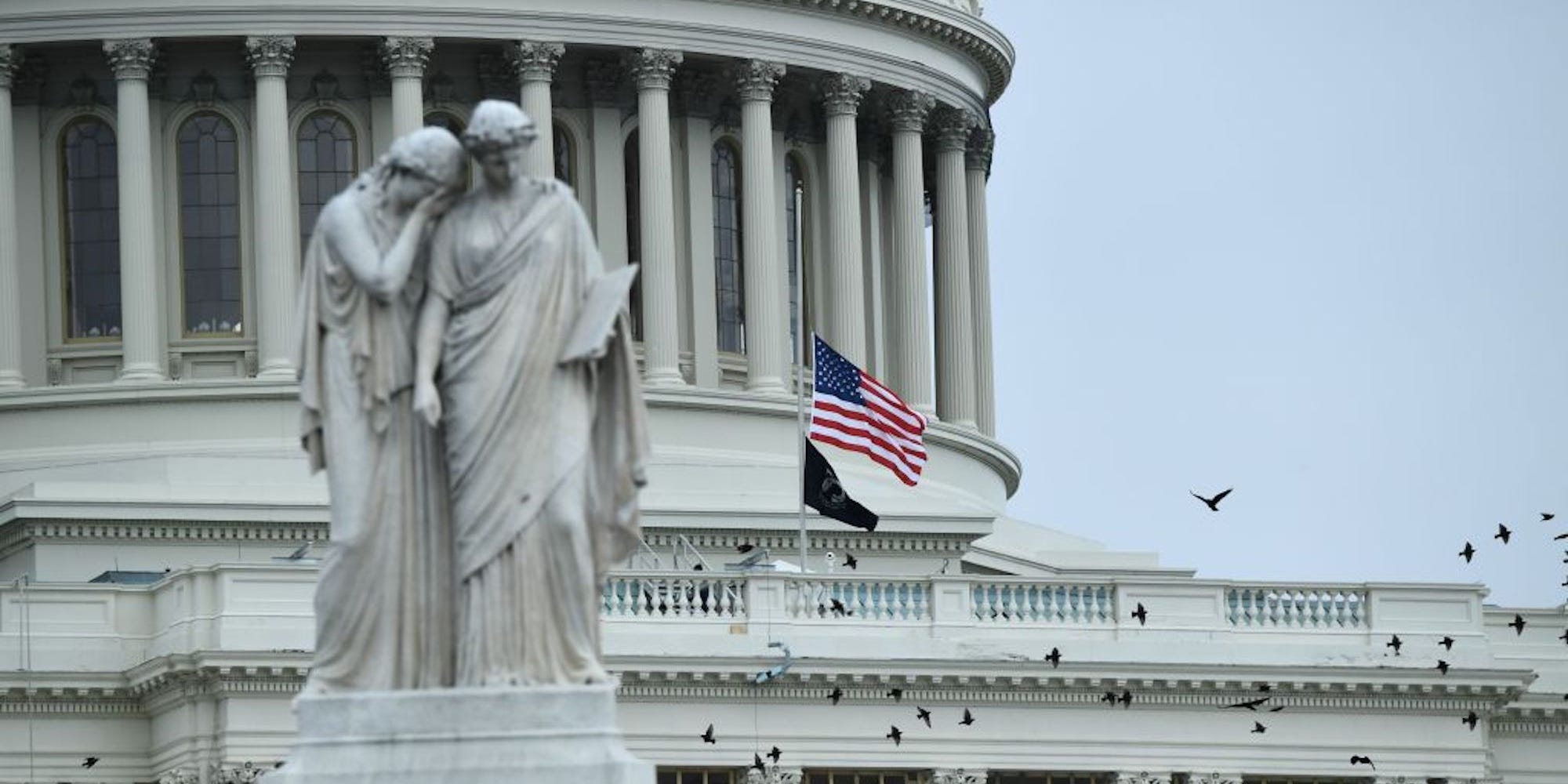 BRENDAN SMIALOWSKI/AFP via Getty ImagesFlags at the US Capitol fly at half-mast to honour US Capitol Police Officer Brian Sicknick, on January 8, 2021, in Washington, DC.

President Donald Trump has not ordered flags to be flown at half-mast over federal government buildings in honour of Brian D. Sicknick, the police officer killed in the storming of the Capitol on Wednesday.

An aide to Vice President Mike Pence told The New York Times that while Pence has contacted Sicknick’s family to offer his condolences, Trump has not contacted them.

Flags over the US Capitol were flown at half-mast in honour of Sicknick Saturday, while the White House did not lower its flag.

For unexplained reasons, the White House did not lower flags to half-staff today in honor of the Capitol Police officer, Brian Sicknick, who died last night from injuries he sustained while on duty responding to the pro-Trump mob. The Capitol did lower flags today.

The White House did not immediately reply to a request for comment on why flags at the executive mansion were not lowered.

The last time Capitol Police officers were killed in the line of duty was in 1998 when a gunman killed two officers in the Capitol after bursting through security barriers. President Bill Clinton after the killings ordered flags to be lowered at the White House and other executive buildings in honour of the officers, reported the Associated Press.

Trump had made his support for law enforcement one of the cornerstones of his reelection campaign last year.

The Capitol Police announced Sicknick’s death on Thursday, which in a statement said he “was injured while physically engaging with protesters” as they swarmed the US Capitol.

“He returned to his division office and collapsed. He was taken to a local hospital where he succumbed to his injuries,” said police.

Law enforcement sources have told media outlets, including the Associated Press, that Sicknick was killed from brain injuries after being struck on the head by a fire extinguisher by a rioter.

A tribute in lights to honor U.S. Capitol Police Officer Brian Sicknick who died from injuries sustained defending against those who stormed the Capitol Building. His tragic death reminds us that cops will sacrifice it all to keep us safe. #NeverForgetpic.twitter.com/E7ApX6ZYED

Before the riot, Trump addressed the protesters, who had gathered to support his baseless allegations that the election had been stolen from him as a result of mass fraud.

The president told them they would have to “fight much harder” and urged them to march on the Capitol, where lawmakers were certifying President-elect Joe Biden’s victory.

In the Capitol’s resulting violence, a Trump supporter, Ashli Babbit, was fatally shot by a police officer and three people died in medical emergencies.

On Thursday, police and law enforcement officers from several agencies lined the streets of Washington DC to pay tribute to Sicknick, only the fourth Capitol Police officer in its history to die in the course of duty. Lawmakers, including Senate Majority Mitch McConnell, have paid tribute to Sicknick.

Many of the protesters on Wednesday directed their fury at Pence, who had refused to comply with Trump’s demands and find a way to block the certification of Biden’s win.