Trump needs to find a better nickname for Biden, and fast.

“I would put on my old uniform and go to war all over again to protect the right of Tucker Carlson and Donald Trump to say offensive things on TV and Twitter.” – Sen. Tammy Duckworth, responding in The New York Times to Carlson and Trump’s attacks on her patriotism. 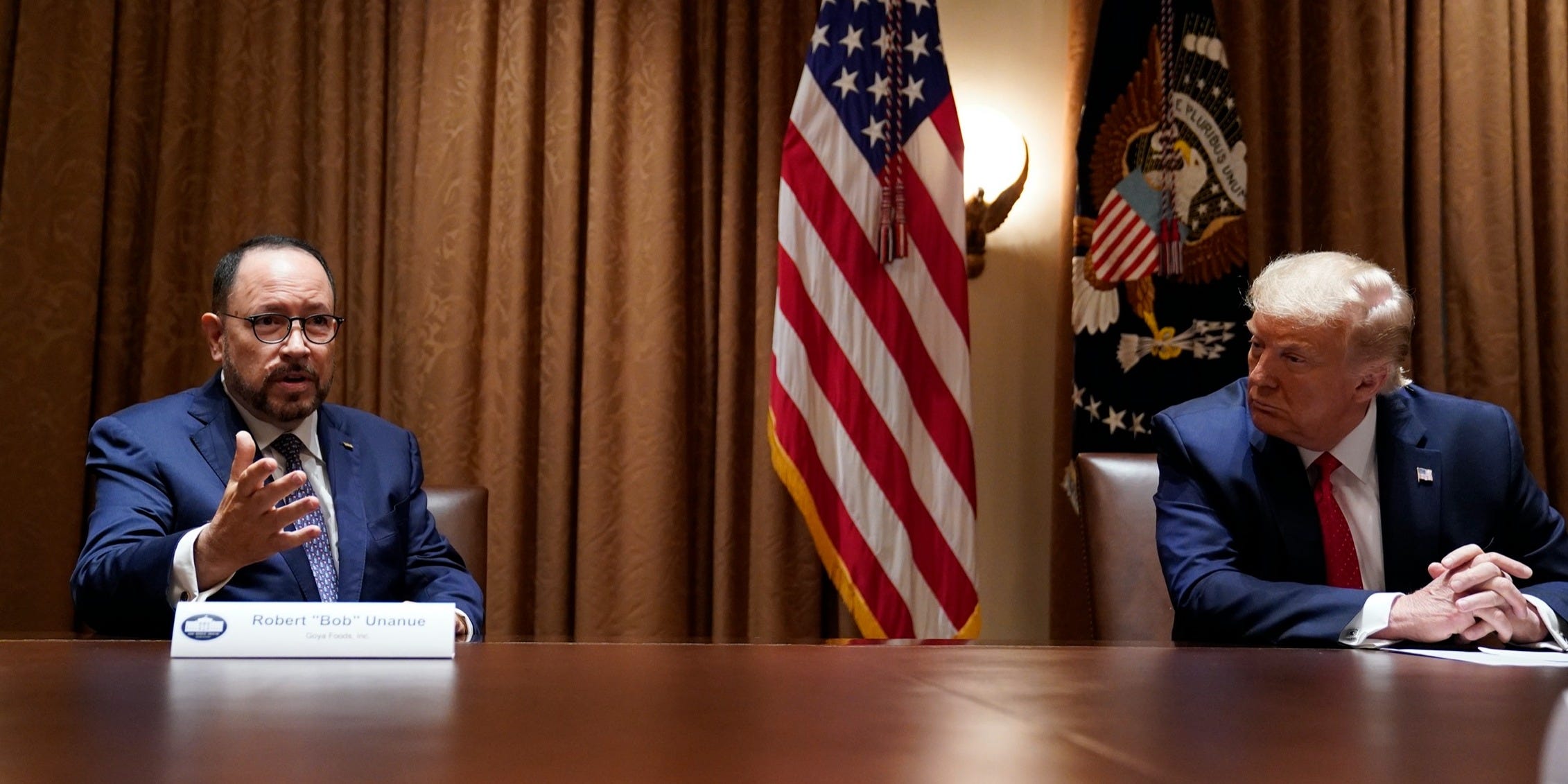 Death tolls are rising in key states.Caseloads continue to rise at alarming rates especially in the South and West, and now deaths are also climbing in Texas, Arizona, and Florida, among other states. Nearly 60% of Americans say we’ve opened too quickly.

Goya Foods is facing boycott threats afterRobert Unanue says US is “truly blessed” to have Trump as president. Unanue’s grandparents founded Goya, the largest Hispanic-owned food company in the US. Julian Castro and Rep. Alexandria Ocasio-Cortez are among those condemning his statement.

The Hagia Sophia will become a mosque again.The glorious, 1,500-year-old building was a cathedral for 1,000 years, then a mosque for 500 years before it became a museum in 1935. Turkish President Erdogan, a devout Muslim, pushed to end its secular status. Meanwhile, Notre Dame Cathedral will be rebuilt exactly as it was before the fire – no modern spire! 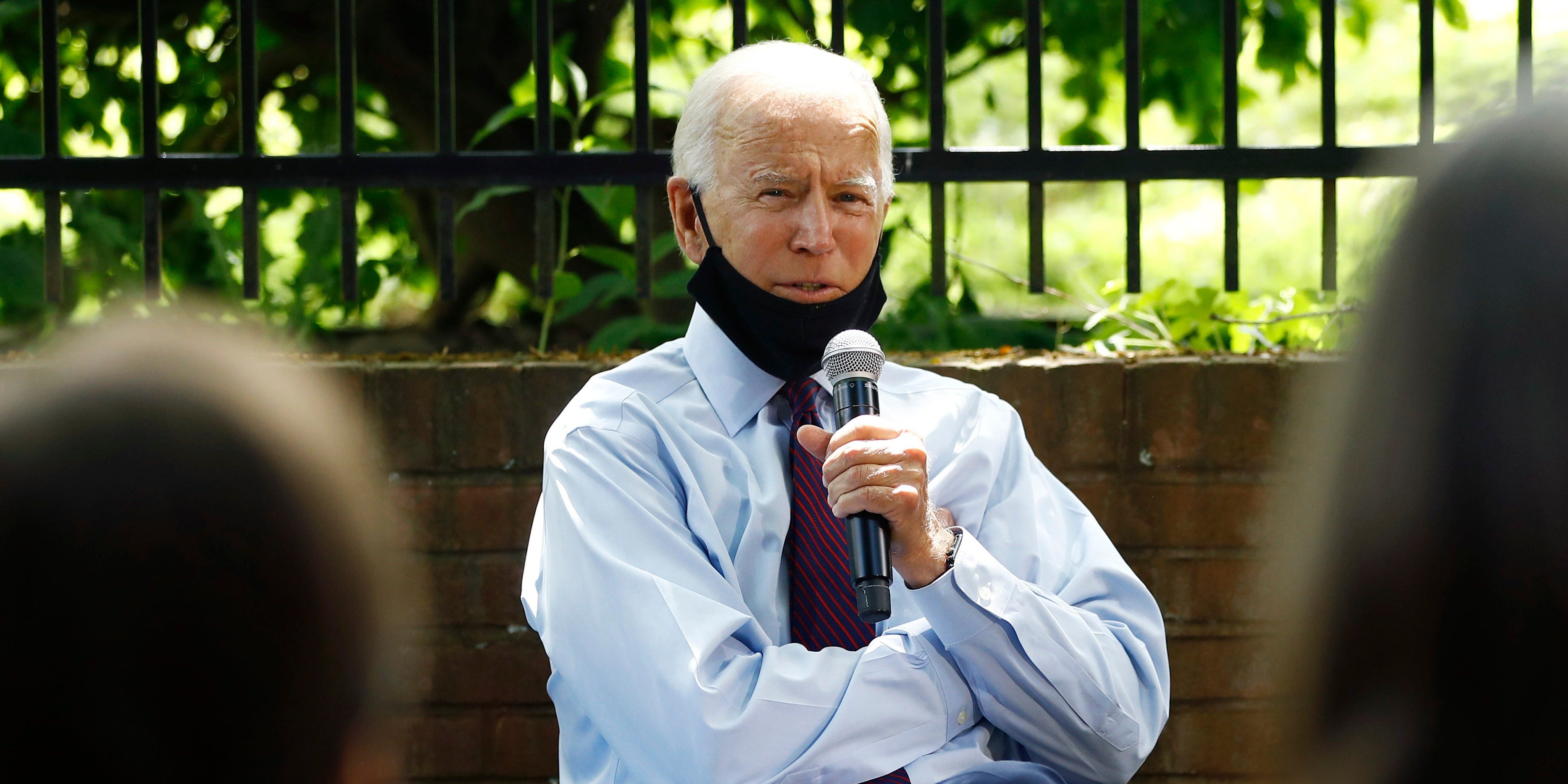 Associated PressFILE – In this June 25, 2020, file photo, Democratic presidential candidate former Vice President Joe Biden, centre, speaks to Stacie Ritter, right, and her son, Jan, during a meeting with families who have benefited from the Affordable Care Act in Lancaster, Pa. Biden is hoping to capture Florida and other pivotal states by pushing Latino turnout rates higher than when Hillary Clinton lost to Donald Trump in 2016. (AP Photo/Matt Slocum, File)


Trump needs to find a better nickname for Biden

According to news reports, Joe Biden is a elderly man who lives in a Delaware basement. We’ve heard that Biden was once Vice President of the United States and a US senator. Apparently, he is the presumptive Democratic nominee for president.

The Trump campaign confronts a huge problem: Americans don’t have strong opinions about Joe Biden, don’t seem to want to have strong opinions about him, and aren’t paying much attention to what Republicans are saying about him. The greatest taunter in American politics, Trump swept to power by naming and degrading his opponents. (This list of Trump-coined nicknames may be his greatest accomplishment.) Americans don’t like Trump, but he made us dislike his rivals more, especially Low-energy Jeb Bush and Crooked Hillary Clinton.

Biden has so far eluded Trump’s dagger, partly by hibernating as Trump flounders through the pandemic, and partly by being a nondescript old guy. Only 28% of Americans have a strongly unfavourable view of Biden, an amazingly tiny number in this environment. And he’s way, way less unpopular than Hillary Clinton was this time four years ago. She had a minus-22 net favorability rating, while Biden is just minus-1. (Trump is minus-31!)

Trump just can’t figure out how to smear Biden because, as a boring white man, he just doesn’t set off Trump or Trump’s supporters the way Barack Obama or Hillary Clinton did. Trump has tried depicting Biden as “creepy,” but that’s not working, even with his own people. He’s tried harder to make “Sleepy Joe” stick, but that also isn’t grabbing voters. If anything, Sleepy Joe sounds like a relief. If only we had a president who was sleeping, and who didn’t wake up at 5:30 am to tweet and watch Fox.

The economy is sinking. The pandemic is raging. Trash-talking represents Trump’s best opportunity to win in November, which means he needs to figure out how to demonize Biden and fast.

As Republican consultant Nelson Warfield told The New York Times: “I made my first negative ad starring Hillary Clinton in 1992 and I kept doing ads criticising her across the next 24 years. And I was by no means alone. Republicans have months to do to Biden what Republicans had over two decades to do to Hillary.” –DP

Now, it’s no secret that the former vice president has never been the most eloquent speaker, and he is 77 years old. But Biden has also spoken of a lifelong struggle with stuttering, and his campaign released a summary of his most recent medical exam in December which described him as “healthy” and vigorous.”

The president, for his part, was roundly mocked last month for being unable to articulate a single ambition he wants to pursue in a second term during a Fox News town hall hosted by Sean Hannity, arguably Trump’s most prominent media sycophant.

Once again on Fox News last night, following a 70-second supercut of Biden verbal gaffes, Hannity asked Trump if he thought the Biden campaign was trying to get the candidate to back out of a debate for fear that he’d be embarrassed.

“He hasn’t taken any cognitive test, because he couldn’t pass one,” Trump said. “I actually took one when I, very recently, when I was, you know, the radical left was saying ‘is he all there, is he all there,’ and I proved I was all there because I aced it. I aced the test. And he should take the same exact test.” – Anthony Fisher 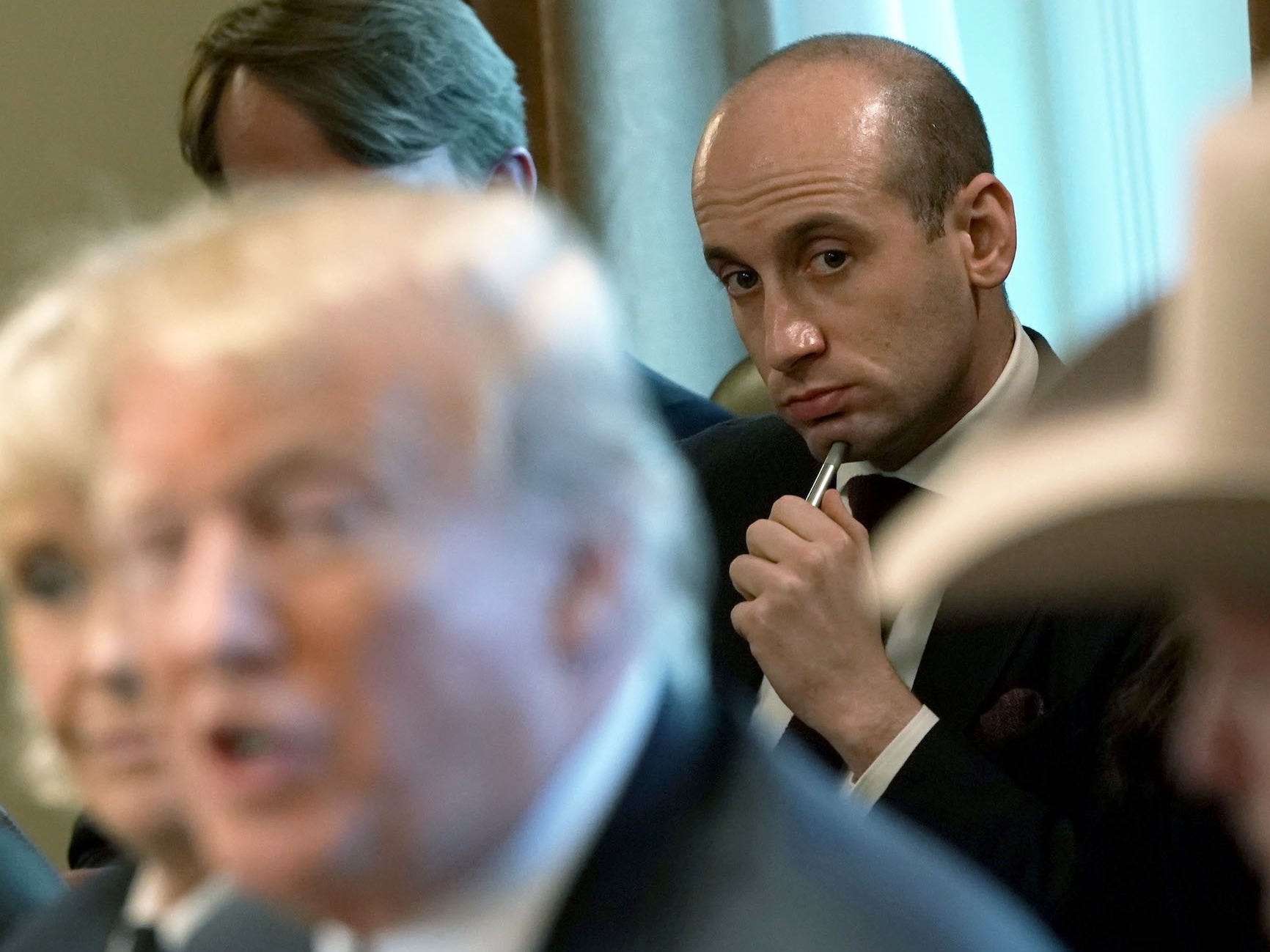 Another perverse attack on legal immigrants

This administration, so incompetent in controlling the pandemic, is proving diabolically capable at restricting immigration. The Washington Post reports that USCIS has massively scaled back printing of essential papers that legal immigrants need, notably green cards. Citing budget constraints, USCIS has cancelled work at one of its two contract printers and reduced production at the other, leaving legal residents in a state of undocumented limbo.

Also this week, the Voice of America, under a new Trump-allied CEO, decided not to renew visas for foreign nationals who work there. And the administration continues its efforts to expel international students who attend colleges that have adopted online classes to get through the pandemic.

These policies and many other Trump anti-immigrant efforts betray the administration’s fundamental lack of confidence in America. The Stephen Millerized White House believes that immigrants are coming to steal from us, and take our money and ideas back to their home countries. International students are here to exploit our system and heist our intellectual property for China. Foreign reporters are here to subvert VOA. The White House sees immigrants as spies and fifth columnists fundamentally loyal to a foreign nation, rather than dreamers galvanised by the American promise. Historically, international students often stay here and become the most productive, creative workers in the economy. Foreign reporters become inspired here, and become evangelists for American values.

For all its America Firstism, the Trump White House doesn’t trust America enough to believe that it can inspire this generation of students and green card holders. – DP

Biden’s ‘Buy American’ plan is good, but it needs teeth

On Thursday, presumptive Democratic presidential nominee Joe Biden made a speech outlining a plan to revive the middle class in Scranton, Pennsylvania. In it, he promised to invest in manufacturing and tech (outside Silicon Valley); reverse the Trump tax cuts; support shareholder capitalism; and get corporations to pay their fair share of taxes.

This is all very good, but it’s going to need teeth, and the biggest tooth is antitrust enforcement.

In part, a renewed focus on antitrust will be necessary to preserve the small and medium sized enterprises (SMEs) that survived the pandemic. When it’s over the SMEs that survived will likely need more help than their corporate counterparts, putting them at risk for consolidation. That means the government will have to keep a watchful eye on markets to ensure that little guys aren’t swallowed by the big ones.

Then there’s the task of cleaning up consolidation in our current markets. Even before the pandemic (and increasingly after the financial crisis), the US was becoming a country of bigger and bigger companies using their power to destroy competition and limit consumer choice. We see that in tech, agriculture, media, telecommunications, and healthcare.

We need to update and enforce antitrust regulations that were left to wither after their relevance was questioned starting in the 1970s. Back then, legal scholars started to argue that antitrust should be defined by how corporate consolidation impacts price and only price, not competition in general. Four decades later and we now have an economy of companies too powerful to regulate and too big to compete with. Just ask any company that’s tried to go head to head with Facebook.

It’s time to change the game by going back to basics. Back in 1890, Sen. John Sherman – for whom our Sherman Antitrust legislation is named – famously declared: “If we will not endure a king as a political power, we should not endure a king over the production, transportation, and sale of any of the necessaries of life.” He’s still right 130 years later. – Linette Lopez 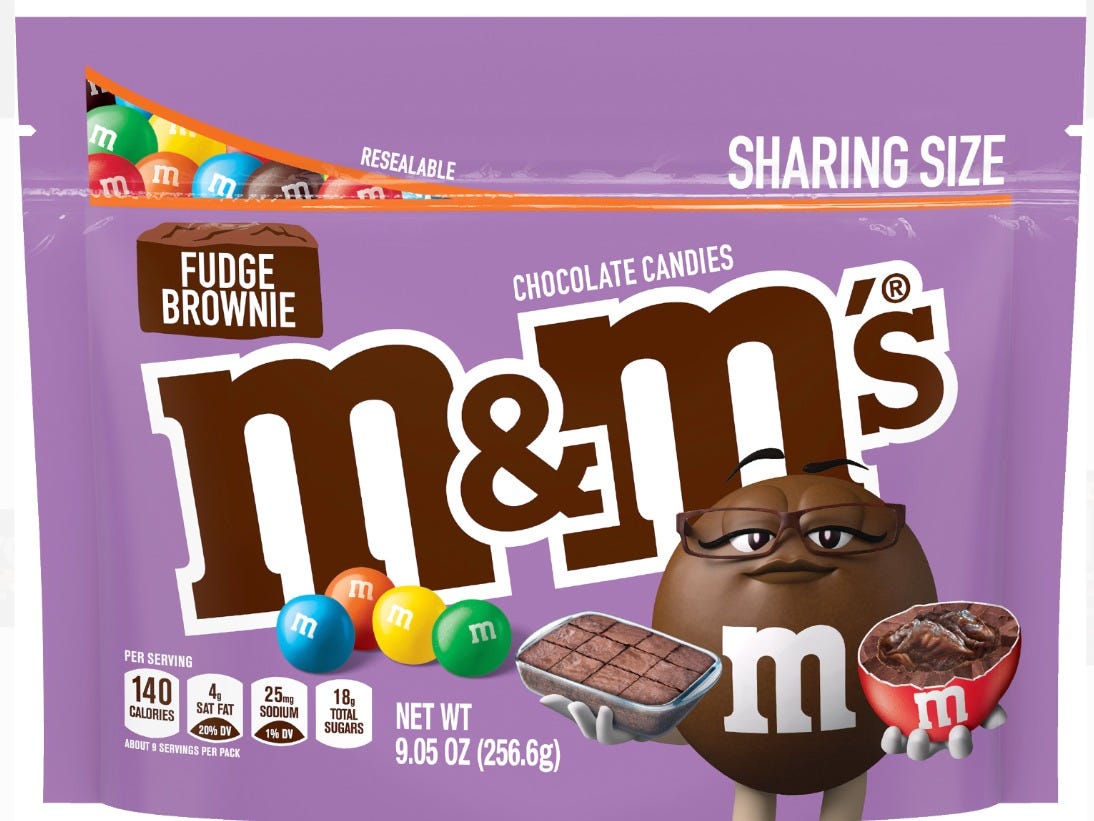 Mars Wrigley launched a new M&M flavour, fudge brownie, during the pandemic. The company’s president explains how they pulled it off. 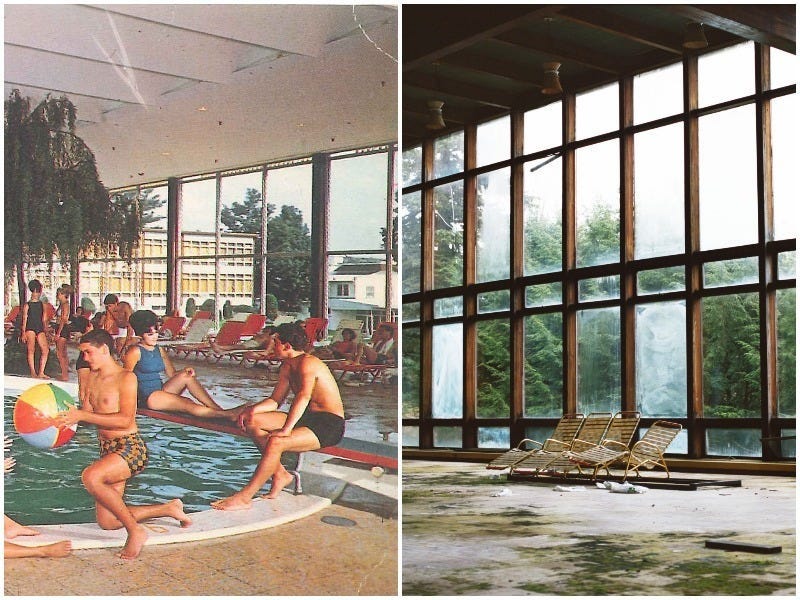 “Everything in this world is shut down … The only thing that is open is NOTHING.” Making the rounds on Instagram: an extremely darling four-year-old ranting about the pandemic.

California police conclude Robert Fuller died by suicide. The Black man was found hanging from a tree on June 10, prompting protests and demand for an investigation.

McConnell floated $US40,000 cutoff for next wave of stimulus checks. Republicans want to narrow the number of people receiving the government aid. The McConnell cutoff would exclude 20 million households covered by the first round of checks, which went to individuals with incomes up to $US75,000.