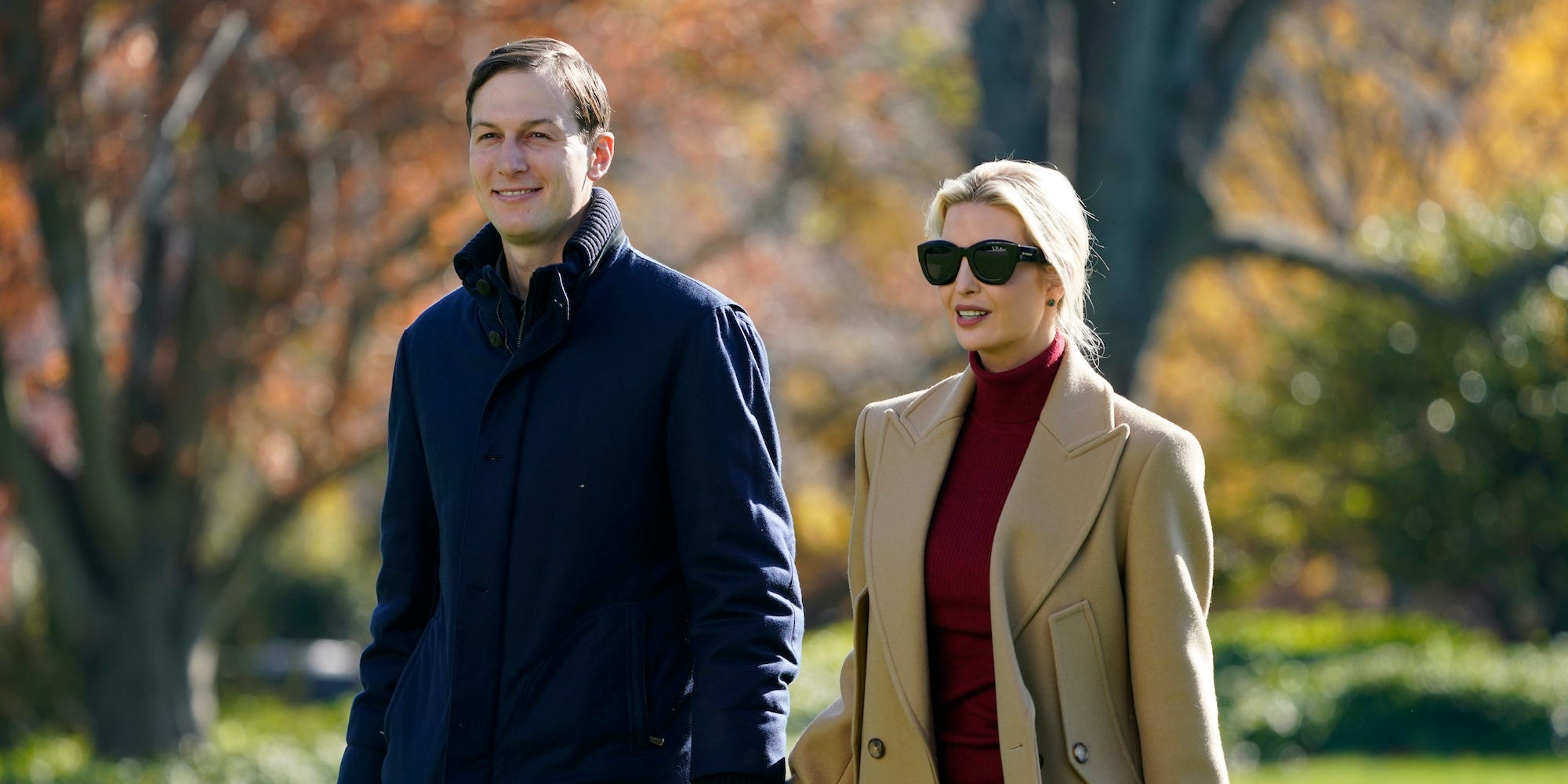 Patrick Semansky/APPresident Donald Trump’s White House Senior Adviser Jared Kushner and Ivanka Trump, the daughter of President Trump, walk on the South Lawn of the White House in Washington, Sunday, Nov. 29, 2020, after stepping off Marine One after returning from Camp David.

Ivanka Trump and Jared Kushner didn’t allow Secret Service agents assigned to their detail to use any of the six bathrooms in their 5,000-square-foot mansion in Washington, DC, so the agents resorted to using port-a-potties, store restrooms, and even the facilities in the homes of Vice President Mike Pence and former President Barack Obama, The Washington Post reported on Thursday.

Ivanka and Kushner, President Donald Trump’s daughter and son-in-law who served as White House advisors, live in DC’s affluent neighbourhood of Kalorama in Northwest Washington, which also is home to Amazon founder Jeff Bezos, Obama, and other well-known names.

The Secret Service eventually came to a more permanent and comfortable solution for the agents â€” on the taxpayer’s dime. The Post reported that taxpayers have spent a whopping $US144,000 since September 2017 â€” around $US3,000 a month â€” on a basement studio apartment near the Kushner residence with a bathroom for agents to use.


Read more:
Trump’s Secret Service detail could be subpoenaed to testify against him in criminal proceedings and former agents are stressed about it

White House spokesman Judd Deere denied that the Kushners prohibited Secret Service agents from using the bathrooms in their home, stating, “It was only after a decision by the [Secret Service] was made that their detail sought other accommodations.”

Multiple sources told the Post, however, that “the bathrooms inside the Trump/Kushnerhome were declared off-limits to the people protecting themfrom the beginning.”

“It’s the first time I ever heard of a Secret Service detail having to go to these extremes to find a bathroom,” one law enforcement official told the Post.

The Post reported that agents occasionally went to a garage on the Obama’s nearby Kalorama property that the Obamas’ detail had set up as a “command post” for their own use. But that solution turned out to be short-lived after an agent on the Kushners’ detail “left an unpleasant mess in the Obama bathroom at some point before the fall of 2017,” resulting in the Kushner/Trump agents being barred from coming back.

At some times, they also drove about a mile away to a Secret Service command post at the Naval Observatory, where the Pences live, to use the bathrooms there. At others, they relied on the goodwill of the Kushners’ neighbours and had to use porta-potties out on the street.

Take a tour of Miami’s exclusive, high-security ‘Billionaire Bunker,’ where Ivanka Trump and Jared Kushner just dropped $US30 million on an empty lot

After some agents knocked on the door of the Kushners’ neighbour Kay Kendall, chairwoman of the D.C. Commission on the Arts and Humanities, to use her bathroom and shower, she had the idea to rent out the basement apartment in a rental property she owned across the street to the government for the agents.

“They sort of came in with the attitude, like, ‘We are royalty,'” the Kushners’ former neighbour Dianne Bruce told the Post. “When they put the porta-potty right outside on the footpath we weren’t allowed to walk on, that was when people in the neighbourhood said, ‘That’s really not acceptable.'”

The Kushners are looking to move on to their next chapter after the tumultuous Trump presidency. Recently, a moving truck was spotted outside of their Kalorama home, and the couple has reportedly spent $US32 million on a waterfront property in Indian Creek Village in Miami, a private island dubbed the “Billionaire Bunker” with its own police force and marine patrol, who presumably have their own bathrooms to use.