Trump is normalizing the possibility of violence in the 2020 election 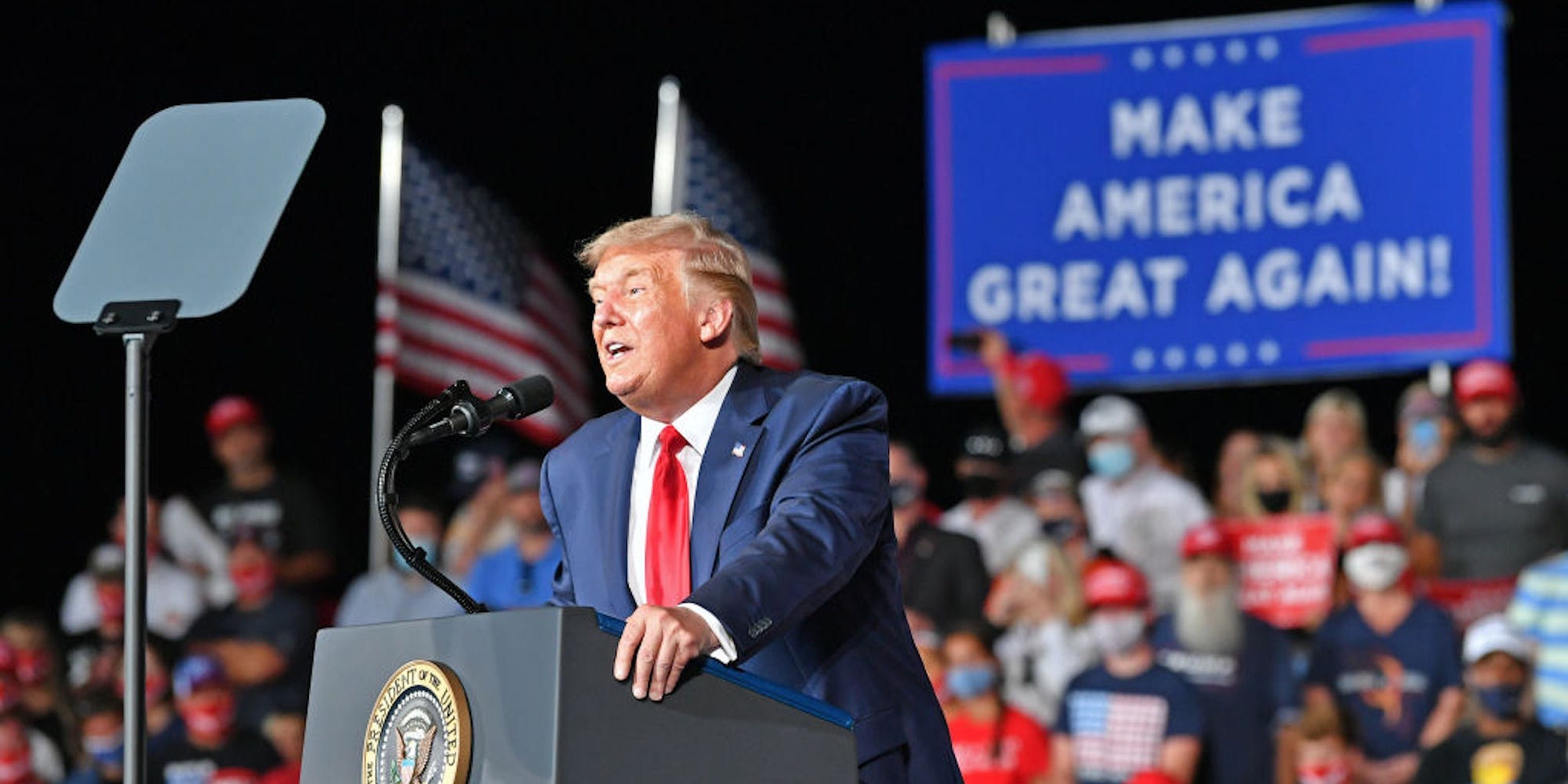 Hundreds of armed right-wingers, including skinheads and self-proclaimed militias, travelled to the battlefield in Gettysburg, Pennsylvania, on July 4 to confront antifa protesters burning American flags.

But when they got to the historic battlefield, there were no antifa members to be found. The gun-toting counterprotesters who descended upon Gettysburg to confront antifa, and use force if necessary, had been duped by an online hoax.

What happened on Independence Day showed how easy it is to leverage fear of antifa â€” a loosely affiliated group of left-wing anti-fascist activists with no leader â€” and create the potential for violence in the process.

Now, months later, President Donald Trump and his allies are tapping into the same angry, fearful sentiments ahead of Election Day and normalizing the possibility of violence surrounding the 2020 election.

In an interview with the Fox News host Jeanine Pirro on Saturday, Trump even hinted he would invoke the Insurrection Act to violently crack down on any post-election rioting and suggested to Pirro he would deploy federal forces “very quickly” if necessary. It’s part of a concerted strategy from Trump to build up the narrative that the nation will break down in factional violence if he isn’t reelected.

For months, Trump has been hitting his supporters with a constant barrage of unfounded racist warnings about a group he terms “ANTIFA THUGS” invading suburbs across the US if former Vice President Joe Biden wins the presidential election.

Despite Trump’s efforts to paint antifa as a major threat, there’s scant evidence to back that up. Antifa is not an organised group and has not been designated a terrorist organisation by the federal government.

But painting antifa as a visceral threat has become a central piece of Trump’s “law-and-order” messaging. Trump has attempted to turn the Black Lives Matter movement and its affiliated groups into a monolith, portraying them as anti-American anarchists determined to tear the country apart. 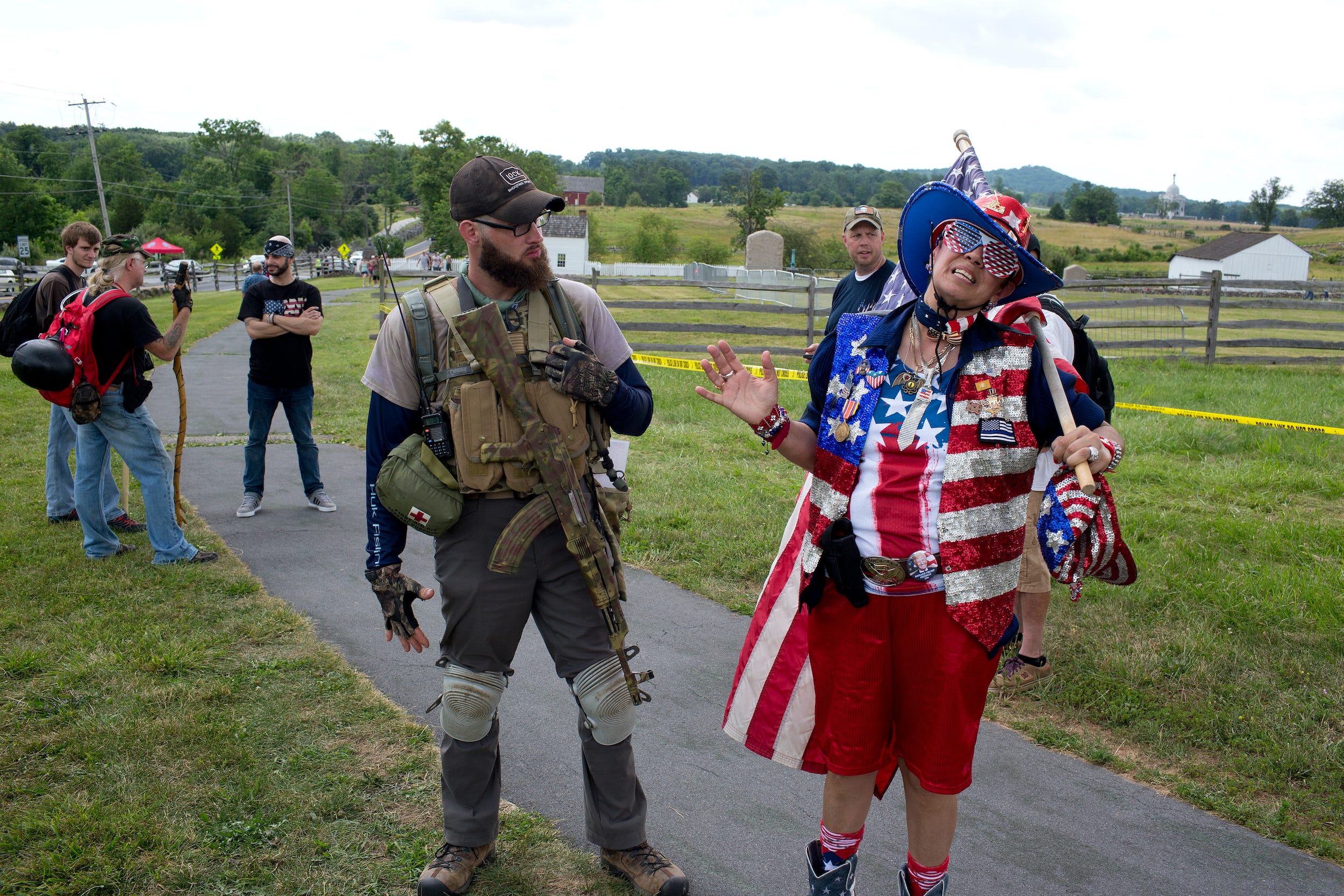 Andrew Lichtenstein/ Corbis via Getty ImagesVarious alt-right groups at the Gettysburg battlefield to defend it from a rumoured confederate-flag burning on July 1, 2017. The rumour turned out to be false.

Last month, a caravan of Trump supporters drove into Portland, Oregon, to confront Black Lives Matter protesters who’ve been engaged in perhaps the most sustained demonstrations the country has seen this year.

There were reports of caravan members firing paintballs and using pepper spray on the protesters. Aaron “Jay” Danielson, who was affiliated with the right-wing group Patriot Prayer, was ultimately shot and killed amid the clashes.

It was evident that the presence of the Trump supporters in the city exacerbated the situation. But instead of calling for calm and condemning violence on all sides, Trump praised his supporters as “GREAT PATRIOTS,” while decrying the anti-racism protesters.

During his interview with Pirro over the weekend, Trump applauded police for fatally shooting Michael Forest Reinoehl, an antifa supporter who was suspected of killing Danielson. Police shot Reinoehl without warning or attempting to arrest him first, according to a witness, and he did not appear to be armed.

But Trump praised the actions of the officers.

“This guy was a violent criminal, and the US Marshals killed him. And I’ll tell you something â€” that’s the way it has to be. There has to be retribution,” Trump said to Pirro.

Trump on a purported antifa sympathizer who allegedly killed someone in Portland being killed by federal forces: "This guy was a violent criminal, and the US Marshals killed him. And I'll tell you something — that's the way it has to be. There has to be retribution." pic.twitter.com/WfIP9b37sA

Trump was widely criticised in June, including by former Defence Secretary James Mattis, after law enforcement tear-gassed peaceful protesters outside the White House to clear a path for the president to take a photo at a nearby church.

Conservative pundits have embraced Rittenhouse, who went to Kenosha wielding a firearm as a self-styled militia member, as a paragon of self-defence. Adopting this dubious narrative, the president in late August suggested Rittenhouse would have been “killed” had he not opened fire.

“He was trying to get away from them, I guess, it looks like,” Trump said of Rittenhouse. “I guess he was in very big trouble. He probably would have been killed.”

Amid all this, Trump has perpetuated the unfounded assertion that mail-in voting will lead to widespread voter fraud. In Washington, Democrats have repeatedly called for expanded access to mail-in voting because of concerns over the coronavirus pandemic.

Trump, who is behind Biden in the national polls, has repeatedly suggested without evidence this would lead to a rigged election. The president is actively attempting to undermine the legitimacy of the election and setting the stage to reject the results if he ultimately loses.

“The Democrats are trying to rig this election because it’s the only way they are going to win,” Trump told supporters at a rally in Nevada on Saturday. 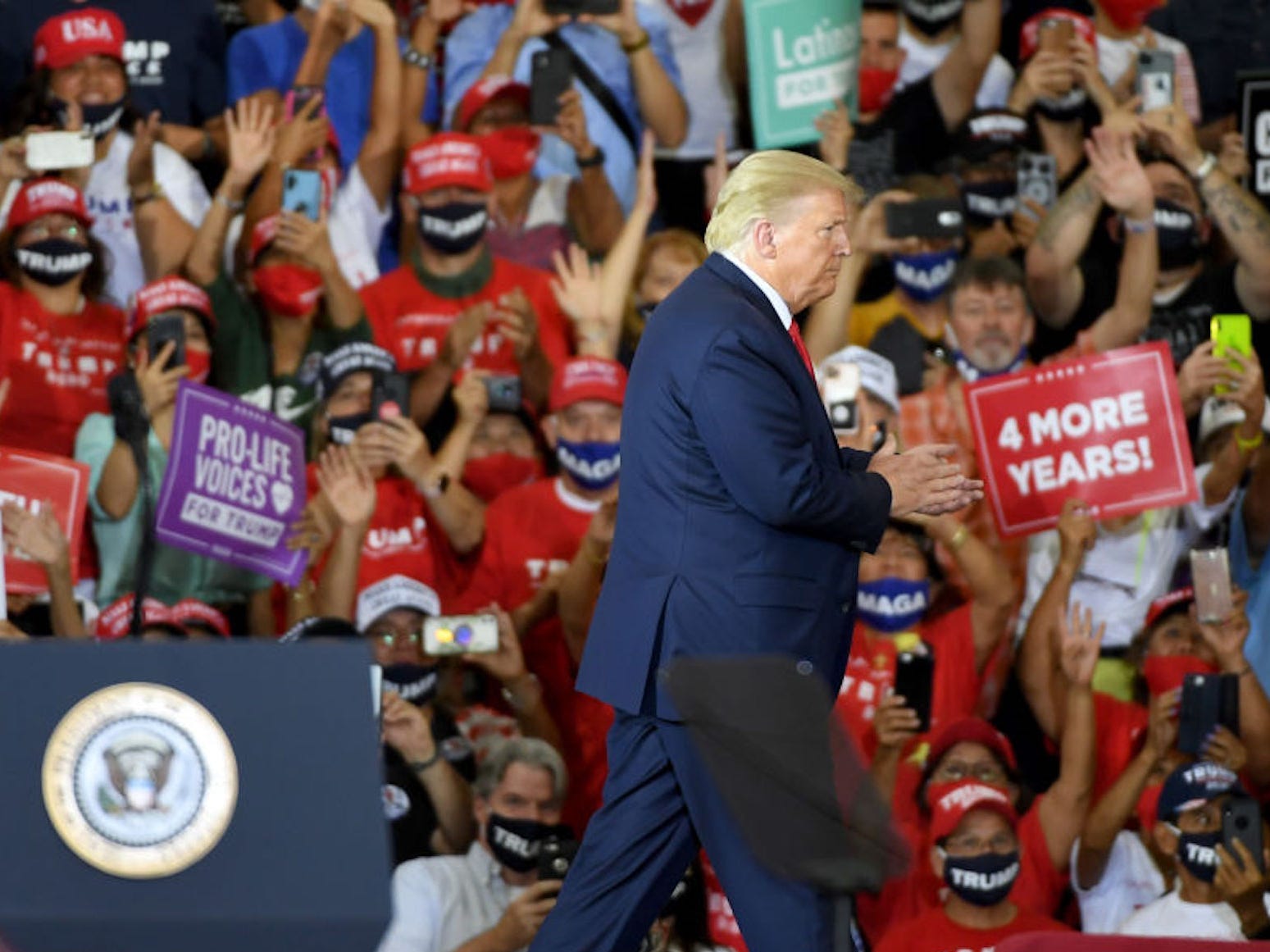 Ethan Miller/Getty ImagesTrump leaves the stage after speaking at a campaign event at Xtreme Manufacturing on September 13 in Henderson, Nevada.

Voter fraud in the US is extremely rare, and voting experts have maintained that mail-in voting is extremely safe and secure. Not to mention, Trump has voted by mail in recent elections and will vote as an absentee (virtually the same thing) in November.

But as Trump pushes this unsubstantiated narrative about mail-in voting, his allies are urging him to take extreme measures if things don’t go the president’s way on November 3.

Roger Stone, Trump’s longtime friend and adviser, last week called into the conspiracy-theory site InfoWars and condoned Trump employing “martial law” to stay in office and detain prominent Democratic figures, including the Clintons, if he loses.

The paranoid rhetoric and conspiracy theories regarding the election are also coming from other members of the Trump administration.

In his speech at the Republican National Convention, Vice President Mike Pence said to voters: “You will not be safe in Joe Biden’s America.”

And Michael Caputo, a Department of Health and Human Services spokesperson, recently went on a 26-minute rant on Facebook in which he issued warnings of an armed insurrection by left-wing groups after the election.

“There are hit squads being trained all over this country,” Caputo said in his rant, first reported by The New York Times.

“When Donald Trump refuses to stand down at the inauguration, the shooting will begin,” he added. “If you carry guns, buy ammunition, ladies and gentlemen, because it’s going to be hard to get.”

Caputo, who also worked on Trump’s 2016 campaign, on Wednesday announced he was taking 60 days of medical leave.

‘The potential for violent conflict is high’

For months, experts have expressed serious concern that Trump’s relentless disinformation campaign has fostered a tumultuous political climate that could easily spark violence on and after Election Day.

“There is already significant chatter about the possibility for a Civil War and armed civil unrest in the event Trump loses his reelection bid, but single-actor and small-cell violent acts would be more likely,” J.J. MacNab, a fellow at the George Washington University’s Program on Extremism, told members of the US House Homeland Security Subcommittee on Intelligence and Counterterrorism in July.

The Transition Integrity Project, a bipartisan organisation founded last year, brought together a group of more than 100 experts in June to simulate what might transpire after November 3.

In a report summarizing the conclusions drawn from the exercises, the group said: “Voting fraud is virtually non-existent, but Trump lies about it to create a narrative designed to politically mobilize his base and to create the basis for contesting the results should he lose. The potential for violent conflict is high, particularly since Trump encourages his supporters to take up arms.”

The report also stressed that Trump would likely put his self-preservation ahead of a peaceful transfer of power, should Biden win in November.

“A landslide for Joe Biden resulted in a relatively orderly transfer of power. Every other scenario we looked at involved street-level violence and political crisis,” Rosa Brooks, a law professor at Georgetown University and cofounder of the Transition Integrity Project, said of the group’s findings in The Washington Post.

The former UK ambassador in Washington Kim Darroch told The Guardian the US felt “very volatile” and that there appeared to be a “genuine risk” of post-election violence.

“All of us have watched Portland and Kenosha, and it feels like a genuine risk. That 17-year-old who shot the demonstrators and the reaction in alt-right circles is really scary,” Darroch said. “Whoever wins, you just hope that people will accept the result and take it calmly, though I couldn’t say I’m certain that will be the case.”