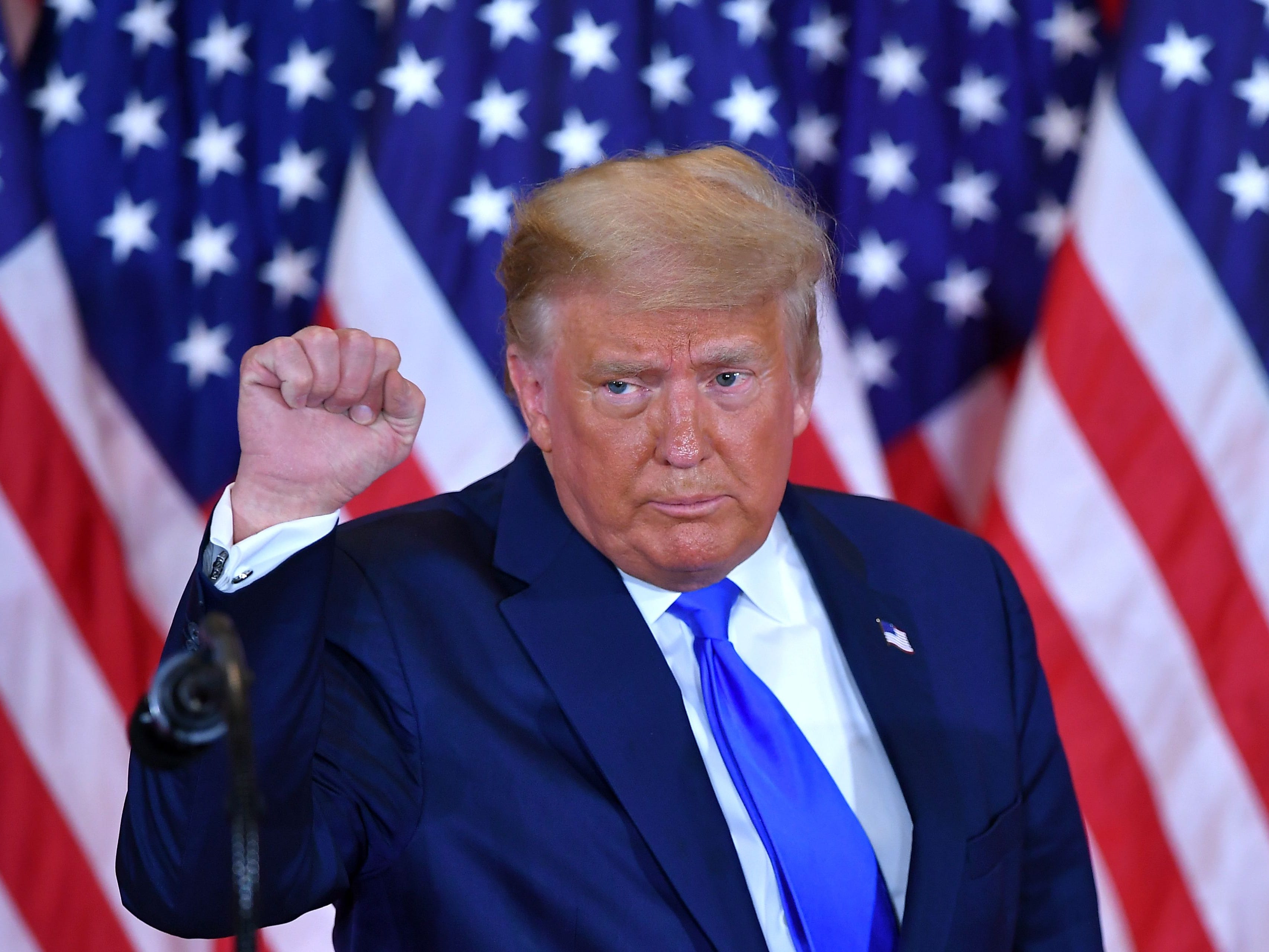 While President Donald Trump wages a political war to declare himself the rightful winner of the 2020 presidential election, his lawyers … aren’t doing that.

On Twitter, Trump has called for election officials to discount hundreds of thousands of legally cast votes, an argument he premises on the false claim that Republican election observers were not permitted to do their jobs.

“Nobody wants to report that Pennsylvania and Michigan didn’t allow our Poll Watchers and/or Vote Observers to Watch or Observe,” he tweeted on Wednesday. “This is responsible for hundreds of thousands of votes that should not be allowed to count. Therefore, I easily win both states. Report the News!”

(In fact, Republican election observers did observe ballot counting in both states.)

As Trump has tried to convince the public that votes should not be counted, he hasn’t made the same claim in court.

His campaign has filed federal lawsuits in both states, each running into the hundreds of pages. In both lawsuits, the Trump campaign seeks rulings that would stop Pennsylvania and Michigan from certifying their electoral votes, which President-elect Joe Biden is projected to win.

The lawsuits allege other problems about the electoral process. They claim that Republican observers were not able to stand close enough to election workers because of coronavirus restrictions, that voter rolls are outdated, and that mail ballots were unfairly processed differently from in-person ballots.

Because of all these alleged irregularities, they argue, the states should delay certifying their votes.

But in none of those hundreds of pages does the Trump campaign argue that votes should be thrown out.

It’s part of a pattern

This has come up a lot with Trump’s claims about the presidential election.

As much as he says that the election was unfair, and that its results should be invalidated, and that he was the actual winner, his lawyers have not actually made these arguments in front of judges, who have the power to make rulings based on election laws.

For example, Trump said in a tweet on November 5 that “all of the recent Biden claimed States will be legally challenged by us for Voter Fraud and State Election Fraud.”

But of the five lawsuits his campaign had filed at that time, zero alleged voter fraud.

In the federal lawsuit in Pennsylvania he filed days later, his campaign alleged that voter fraud might have happened in two counties, both of which overwhelmingly voted for him. The lawsuit also challenged the validity of only 14,000 votes in the state; as of Friday, Biden was ahead in the state by about 60,000 votes,according to Decision Desk HQ data published by Insider. 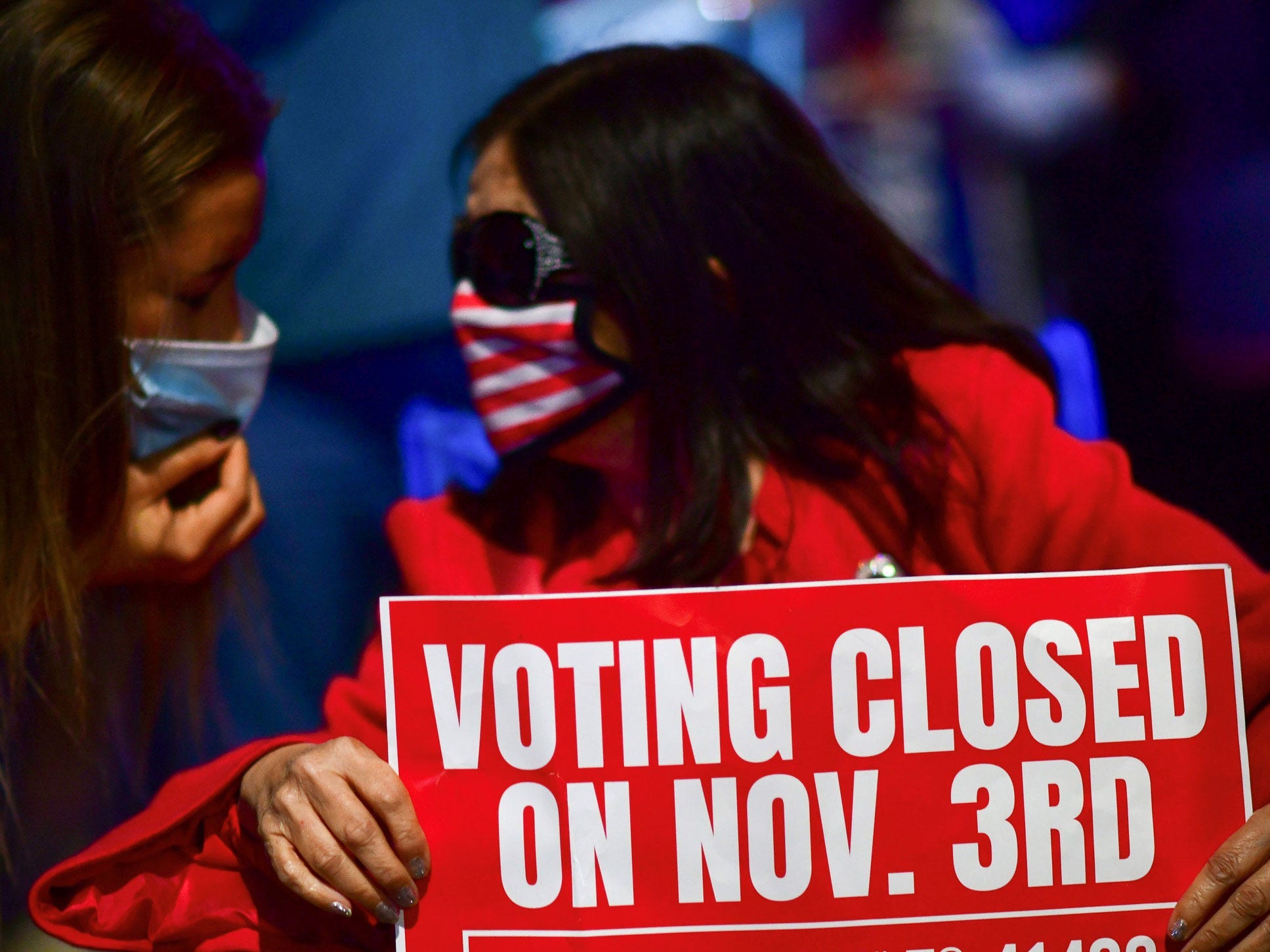 REUTERS/Mark MakelaA Trump supporter holds a sign during a protest outside the Philadelphia Convention Centre on November 5.

In the Michigan lawsuit, the campaign argued that the way the state executed its voting laws might have opened the door to voter fraud and election fraud, but it did not bring forth an actual example of such fraud happening, and none of the affidavits from election watchers alleged any instances of fraud.

On Tuesday, Trump tweeted a misleading opinion piece from the right-wing outlet The Federalist titled “I Was In Philadelphia Watching Fraud Happen. Here’s How It Went Down.” None of the behaviour described in the article is fraud. He tweeted, “Those hundreds of thousands of votes should not be allowed.”

On Tuesday, a judge asked a lawyer for the Trump campaign in another Pennsylvania case, point-blank, whether it had anything to do with fraud.

“To my knowledge at present, no,” he responded.

Rudy Giuliani, Trump’s personal lawyer, has also floated explosive claims about the election process. He said on Twitter that the Trump campaign would be suing to “invalidate hundreds of thousands of fraudulent ballots” in Michigan, with affidavits to back it up.

But the Michigan lawsuits did no such thing. They did not make claims about fraudulent ballots, and they did not ask the court to invalidate any votes.

Many of the affidavits, from Republican election watchers, were preoccupied with social-distancing measures.

They also made irrelevant claims, such as that some workers wore Black Lives Matter apparel, or that they were physically large, or that more military ballots than expected were votes for Biden. 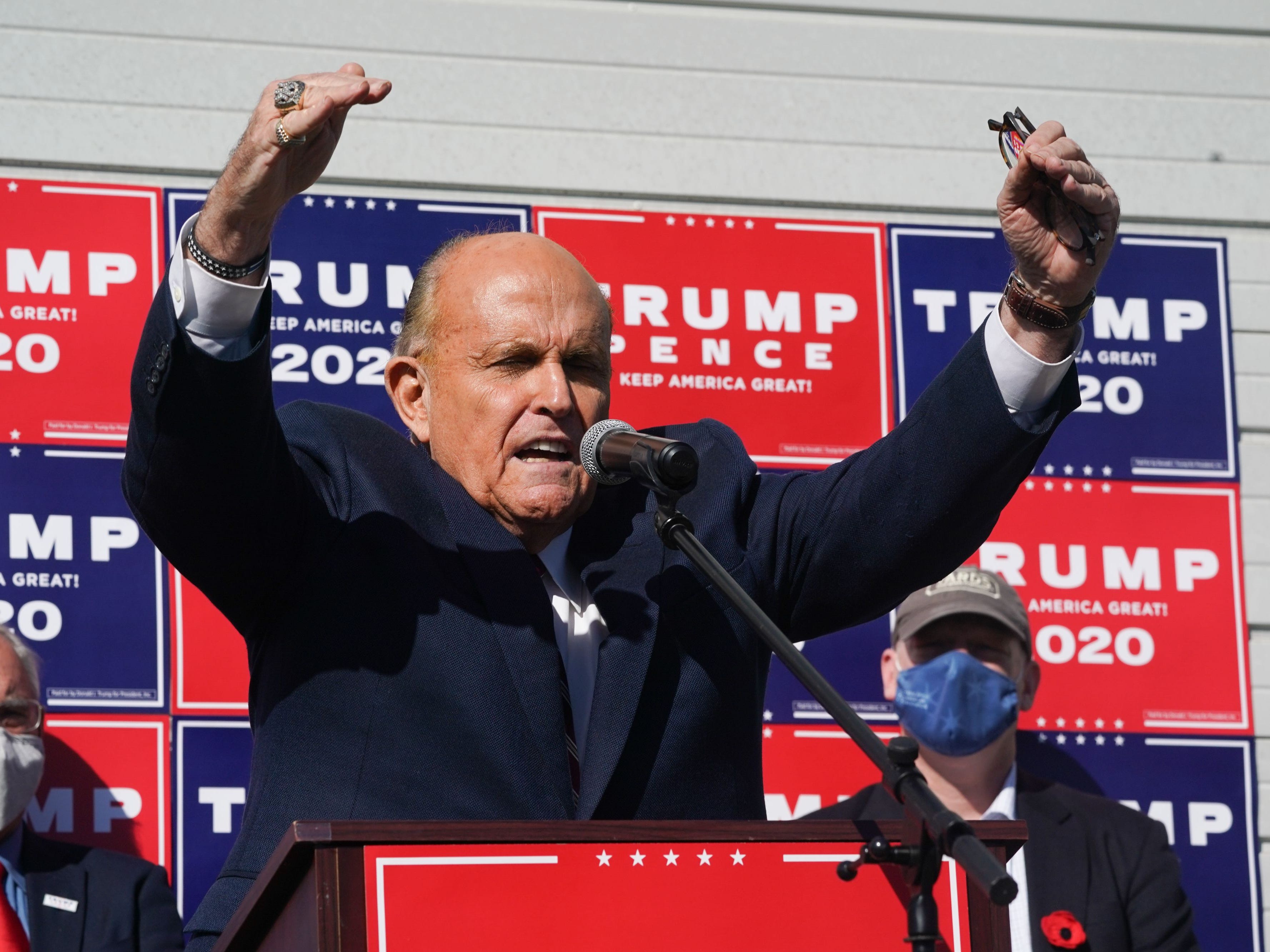 BRYAN R. SMITH/AFP via Getty ImagesRudy Giuliani, an attorney for the president, at a news conference in the parking lot of a landscaping company in Philadelphia on Saturday.

The Trump campaign’s method of gathering evidence to back up its lawsuits has also gotten it into trouble.

In Arizona, it presented hundreds of declarations from people who filled out a form online claiming to have witnessed irregularities. On Thursday, a judge struck them from the record.

Trump has also rejected the result of the 2016 presidential election, falsely claiming that millions of people voted illegally. While Trump clinched the victory by winning the Electoral College, he lost the popular vote to the Democratic nominee, Hillary Clinton, by nearly 3 million votes.

The president hasn’t disparaged the results of other races that Republicans won this year that took place on the same ballots he claims are rife with fraud. Other Republican officials â€” many of whom haven’t acknowledged Biden’s win, like House Minority Leader Kevin McCarthy â€” have crowed about the Democrats’ eroding majority in the House of Representatives. Ronna McDaniel, the head of the Republican National Committee, deleted a tweet suggesting that Vice President-elect Kamala Harris would lead the Senate, an apparent acknowledgment of Biden’s victory.

In his speech early on November 4 where he falsely declared he had been elected to a second term, Trump said he would be “going to the Supreme Court.”

His campaign has filed a motion to intervene in an existing Supreme Court case over voting in Pennsylvania. That case doesn’t have anything to do with electoral or voting fraud â€” it’s over whether votes that were cast by mail by Election Day but arrived at ballot-processing centres later should be allowed to count.

The Supreme Court doesn’t seem eager to intervene in the election, Michael Dorf, a constitutional-law professor at Cornell Law School, told Bloomberg News. It hasn’t required Democrats to file a brief until November 25, two days after Pennsylvania is due to certify its votes.

“I suspect that Chief Justice Roberts and most of his colleagues are hoping that events in the political realm render the matters moot,” Dorf said.

Even if Trump successfully joins the Supreme Court case and Republicans win it, it wouldn’t be enough to stop a Biden presidency.

Pennsylvania’s secretary of state has estimated that only 10,000 ballots cast by mail arrived after Election Day. Even if every single one of those votes were for Biden, they wouldn’t be enough for Trump to overtake the 60,000-vote margin in the commonwealth.

And that’s just one state. 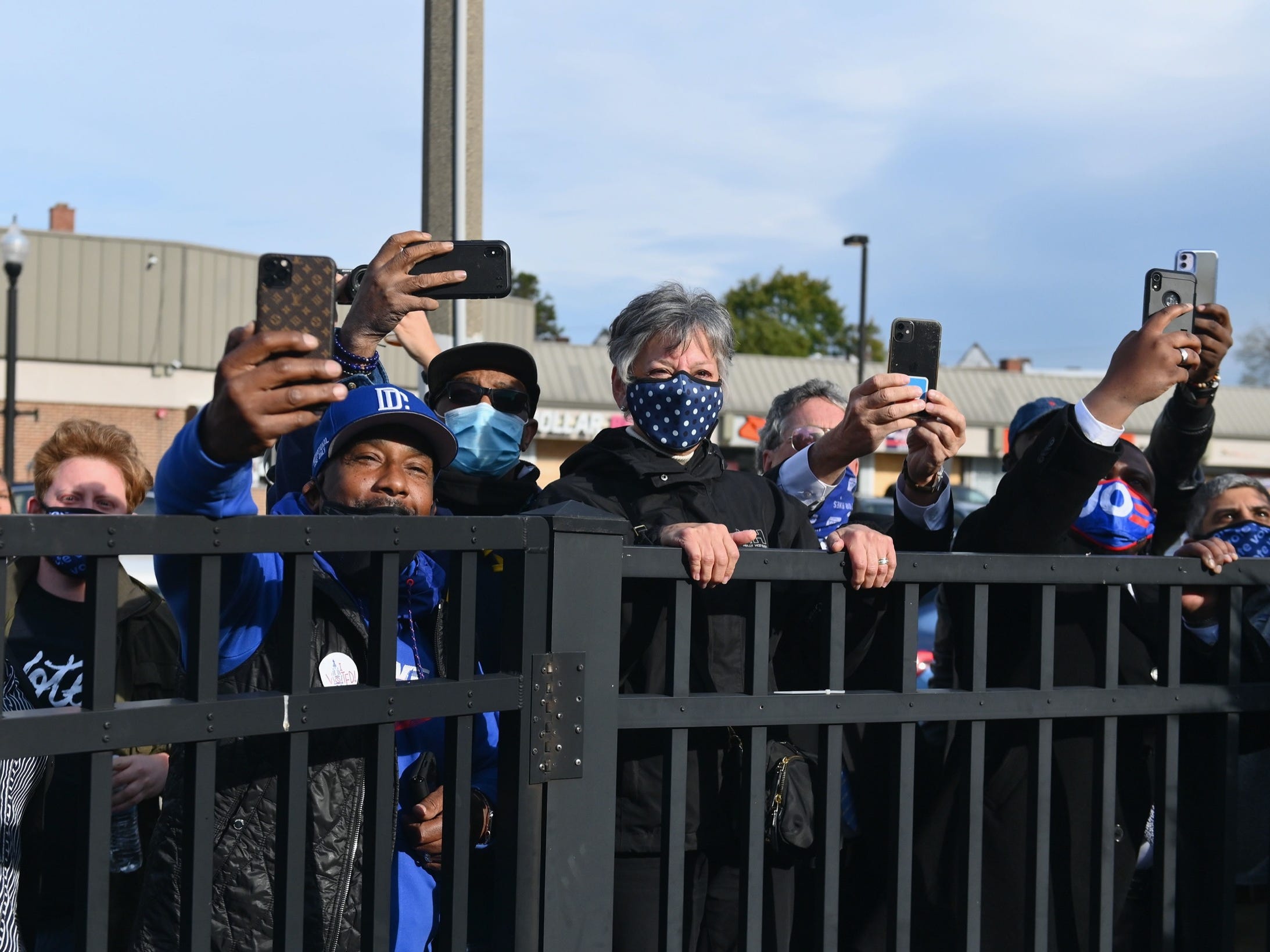 While Trump may be within his rights to ask for certification to be slowed or for some ballots to be recounted, there’s no legal basis to actually throw any votes out, Justin Levitt, a professor at Loyola Law School and a former Justice Department official who oversaw voting-rights cases, told Insider.

“You can’t throw out an election because you just guess that there might have been wrongdoing maybe, particularly when there’s no other reason to suspect any misconduct,” Levitt said, adding: “There are lots of safeguards beyond third-party observers to make sure election officials do their job. It does not follow that every procedural glitch means that you invalidate the election or toss out legitimate ballots.”

As the Trump campaign continues its litigation, it is also continuing to raise money â€” though much of it is going to the RNC and a new Trump-controlled PAC rather than a legal-defence fund.

The Trump campaign sent an email to supporters on Thursday with the subject line “Proof of Election FRAUD.”

It did not contain any proof of fraud. It did not even mention fraud. All it included was a request for more money.