Trump, who has implied that John McCain and John Dingell might be in hell, says he hopes Roger Ailes is in heaven and watching Fox News 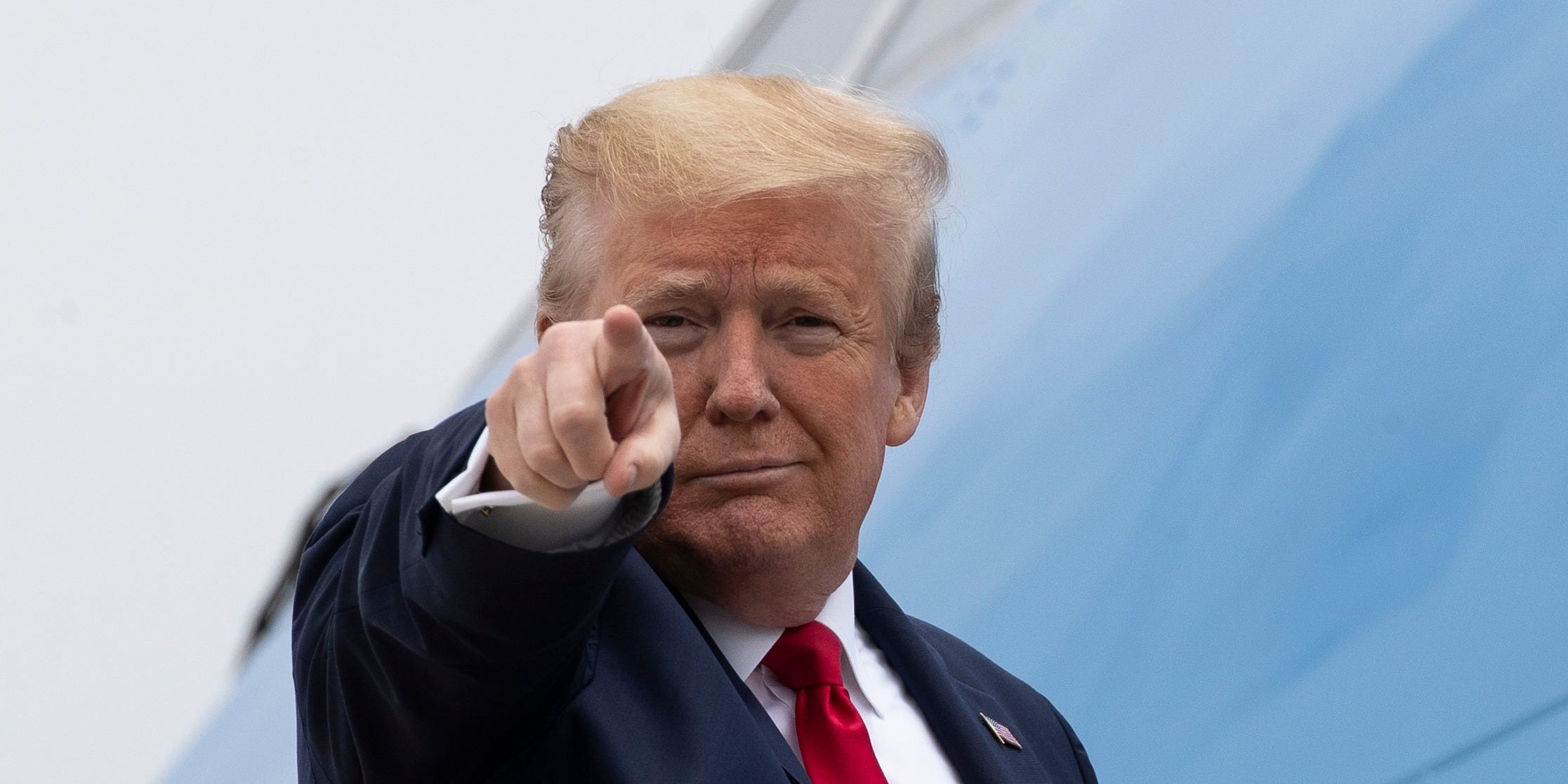 Associated PressPresident Donald Trump points while boarding Air Force One as he departs Thursday, May 21, 2020, at Andrews Air Force Base, Md. Trump will visit a Ypsilanti, Mich., Ford plant that has been converted to making personal protection and medical equipment. (AP Photo/Alex Brandon)

President Donald Trump tweeted on Friday that he hopes disgraced Fox News executive Roger Ailes “is looking down and watching what has happened to this once beautiful creation!” from Heaven.

In recent days, Trump has ramped up his attacks on Fox, his once-favourite network for not being sufficiently supportive and complimentary of him and his administration, specifically targeting hosts and contributors including Juan Williams, Chris Hahn, Donna Brazile, and Neil Cavuto.

On Friday, Trump continued his complaints about Fox by railing against the latest Fox News poll, which showed his Democratic opponent, former VP Joe Biden, leading him by eight percentage points nationwide and outperforming Trump among independents, senior voters over the age of 65, and voters who say

The poll, which surveyed over 1,200 registered voters from May 17-20, also found that while registered voters trust Trump slightly more than Biden on the economy, they trust Biden more than Trump to do a better job of handling the US’ relations with China, the coronavirus crisis, and the issue of healthcare.

Ailes, the once all-powerful chairman and CEO of Fox News who shaped the network into a powerhouse of conservative media, resigned from the network in disgrace in 2016 after nearly two-dozen women publicly accused him of sexual assault and harassment, and died the following year at the age of 77.

Trump has expressed twice on Twitter that he “misses” Ailes and believes he is heaven, but has previously insinuated that former Sen. John McCain of Arizona and former Rep. John Dingell of Michigan, two long-serving members of Congress and war heroes, are in hell.

At a speech before the Freedom and Faith Coalition in June of 2019, Trump attacked senators who voted against the 2017 effort to repeal the Affordable Care Act. In one of the most famous final votes of his career before his death in 2018, McCain crucially voted against a Republican push, heavily backed by Trump, to repeal the Obama-era healthcare legislation.

“We needed 60 votes, and we had 51 votes,” Trump said. “And sometimes, you know, we had a little hard time with a couple of them, right? Fortunately, they’re gone now. They have gone on to greener pastures – or perhaps far less green pastures. But they’re gone. They’re gone, Bill. I’m very happy they’re gone.”

Some commentators noted that Trump could have been also referring to other former members of Congress who criticised him, like former Sens. Jeff Flake and Bob Corker. But given the fact that Flake and Corker voted in favour of the ACA repeal and Trump’s long history of publicly attacking McCain and his family (like complaining that they didn’t properly thank him for McCain’s state funeral), it’s very likely he was including McCain in those are “fortunately” gone now.

Trump also went after Dingell, a Michigan Democrat and the longest-serving member of Congress in US history, during a December 2019 rally in Battle Creek, Michigan.Dingell’s widow, Rep. Debbie Dingell, has represented her late husband’s seat in the House since his retirement in 2015.

“I didn’t give [John] the B treatment, I didn’t give him the C or the D – I could’ve – I gave him the A+ treatment,” Trump said of his decision to lower flags to half-mast in recognition of Dingell’s February 2019 death.

“I said: ‘That’s ok, don’t worry about it.’ Maybe he’s looking up, I don’t know,” Trump added to audible boos and groans from the audience before saying, “But let’s assume he’s looking down.”