'I don't take responsibility': Trump says he's not to blame for persistent delays in coronavirus testing from the CDC 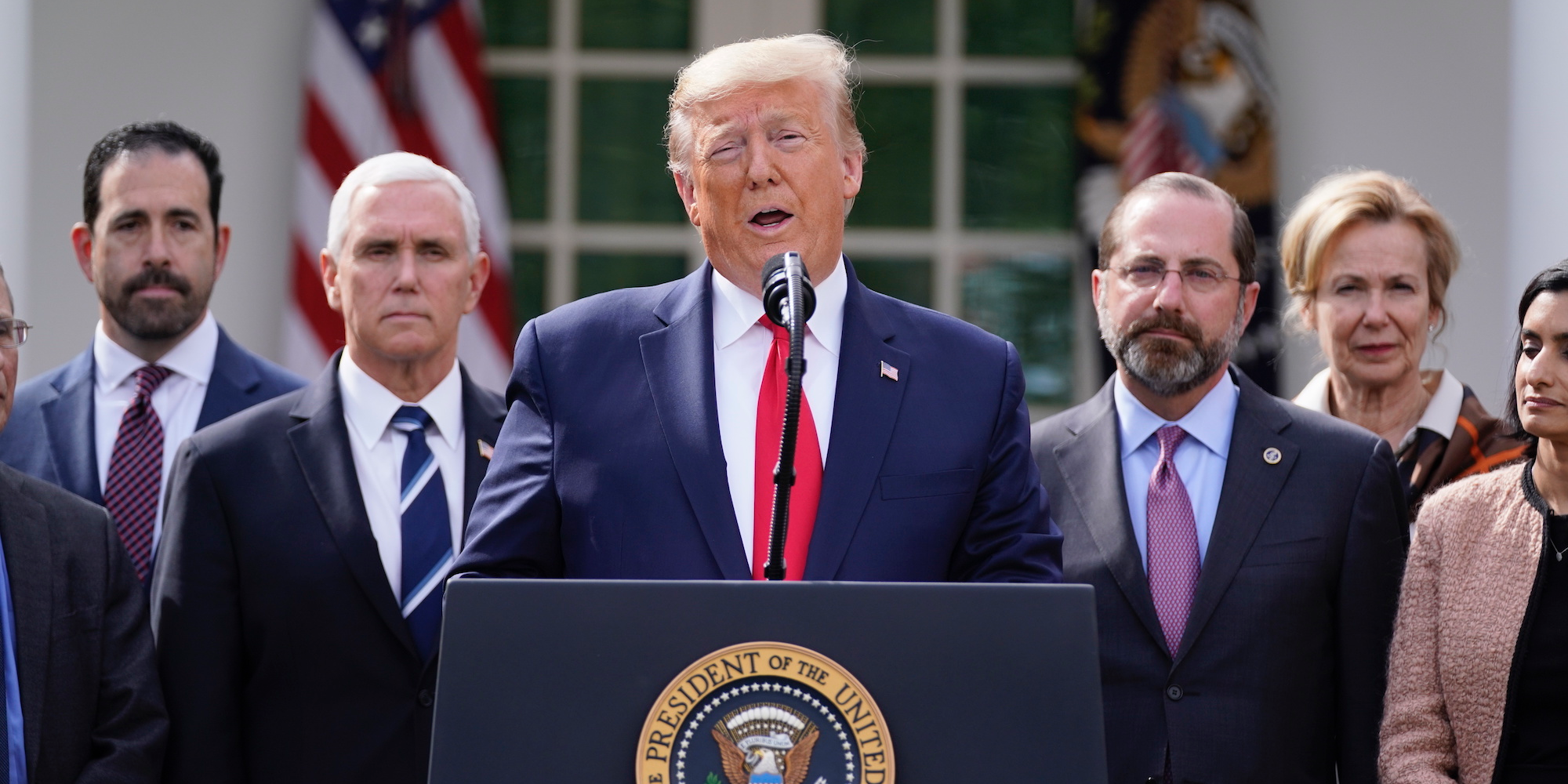 AP Photo/Evan VucciPresident Donald Trump at a news conference about the coronavirus on March 13.

After President Donald Trump declared a national emergency during a press conference on Friday, he declined to take responsibility for the US’s persistent delays in administering tests for COVID-19, the disease caused by the novel coronavirus.

The US was far slower to produce test kits through the Centres for Disease Control and Prevention than other countries, creating ongoing delays in getting the tests to state-level public-health authorities and healthcare providers.

There are over 1,800 confirmed COVID-19 cases in the US, including 41 deaths. At the press conference, Trump followed nearly 20 states in declaring a state of emergency over the coronavirus outbreak.

Not only has the US tested far fewer of its citizens per capita than other developed countries, but doctors and patients have also expressed frustration at US patients not meeting the CDC guidelines for testing or being able to get a test despite showing symptoms consistent with COVID-19.

The lag in testing has hampered the ability of state and local government authorities, healthcare providers, and regular Americans to fully capture the extent of the virus’ spread, which adversely affects authorities’ abilities to manage the situation and take appropriate action.

In a Thursday appearance before Congress, the nation’s top infectious-disease expert, Anthony Fauci, the director of the National Institute of Allergy and Infectious Diseases, said: “The system is not really geared to what we need right now – what you are asking for … that is a failing. It is a failing. Let’s admit it.”

In the news conference on Friday, NBC News White House correspondent Kristen Welker asked: “Dr. Fauci said earlier this week that the lag in testing was, in fact, a failing. Do you take responsibility for that, and when can you guarantee that every American who needs a test has a test?”

“Yeah, I don’t take responsibility at all because we were given a set of circumstances, and we were given rules, regulations, and specifications from a different time that wasn’t meant for this kind of an event with the kind of numbers that we’re talking about,” Trump said.

Trump says "I don't take responsibility at all" when asked about the delay in coronavirus tests pic.twitter.com/rJYEo7Gfpu

Later in the press conference, PBS NewsHour White House correspondent Yamiche Alcindor continued to press Trump on his own personal responsibility in the situation, particularly his decision to eliminate the National Security Council’s global-health unit, which oversaw in part the White House’s response to pandemics.

In Wednesday testimony before the House Oversight and Government Reform Committee, Fauci said it “would be nice” if the global-health unit were still there, adding “we worked quite well with them.”

Trump called Alcindor’s inquiry “a nasty question” and said he didn’t know about the office’s closing, adding, “What we’ve done is we’ve … saved thousands of lives with the quick closing. And when you say me – I didn’t do it. We have a group of people. I could perhaps ask Tony about that because I don’t know anything about it.”

Trump is asked if he takes responsibility for closing the White House pandemic office in 2018 — a move former officials say has weakened the coronavirus response.

"I just think it's a nasty question," he says, claiming he doesn't "know anything about it" https://t.co/FIAmzRAAku pic.twitter.com/V3PjHkgANp

Despite CDC advisory, President Trump could not stop shaking people’s hands during his coronavirus address