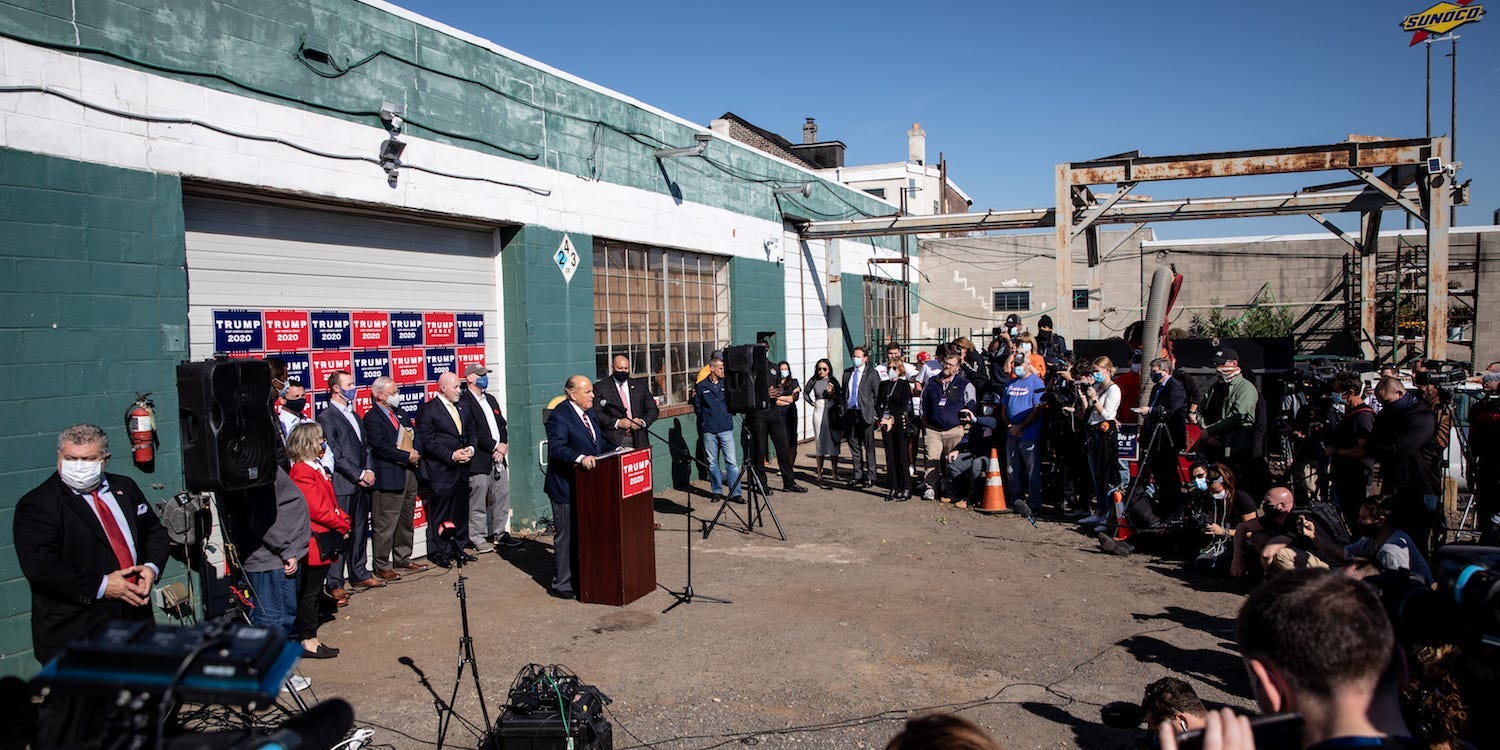 Chris McGrath/Getty ImagesAttorney for the President, Rudy Giuliani speaks to the media at a press conference held in the back parking lot of landscaping company on November 7, 2020 in Philadelphia, Pennsylvania.

It feels like years ago now, but back in May, two former US Special Forces members, along with 60 Venezuelan mercenaries, attempted to kidnap dictatorial Venezuelan President NicolÃ¡s Maduro and inspire a coup to overthrow his government.

The anti-Maduro squad planned the raid for months, but a series of mind-numbingly stupid miscues prevented them from even stepping foot in Maduro’s compound. They were eventually captured by local fishermen.

In a constellation of dumb miscues, there was one particularly head-scratching mistake. Silvercorp, the private security firm that backed the coup attempt, was inexplicably live-Tweeting the beginning of the attack.

Besides the fact that “strikeforce incursion” sounds like the subtitle for a Call of Duty game, one could not even begin to wrap their head around how dumb this was. You don’t have to study at West Point to know that a secret coup attempt requires an element of…secrecy.

Thankfully for those involved in this colossal failure, it may only rank as the second-most embarrassing attempt at seizing power this year. Despite President-elect Joe Biden’s commanding electoral and popular vote margins, sitting President Donald Trump is refusing to concede and attempting to throw out the legitimate results of the election.

At the behest of the country’s chief angry man, his lawyers â€” most notably former New York City Mayor Rudy Giuliani â€” are trying to overturn the results by undermining the vote-counting process and forcing delays anywhere they can. Much like the attempted coup in Venezuela, there are a lot of dumb things happening right now.

There has been some debate about whether Trump’s actions qualify as a “coup d’etat,’ or the removal of an existing government. While Joe Biden’s administration is still attempting to transition, it’s clear that Trump is trying to stop the whole process. Harvard Law Professor Charles Fried told the Boston Globe that “if it succeeded, it would be a coup.”

Giuliani has consistently argued â€” through tangents, lies, and thinly-veiled racism â€” that a large portion of the votes against Trump shouldn’t count. They aren’t interested in the Democratic process because it’s a process that doesn’t allow them a path to victory. This is an attempted coup, regardless of how inept it is.

One of the hallmarks of Trump’s attempted coup has been the nonsensical press conference. First there was the November 7 presser that was held in the lot of a landscaping company in Philadelphia. Trump’s team meant to book the luxury Four Seasons hotel to formally launch their voter-fraud case into the public eye, and Trump even Tweeted as much.

Somehow, a mistake was made, and the crew ended up at a different “Four Seasons,” Four Seasons: Total Landscaping, a gardening business in north Philly. This is an image that serves as a perfect visual parallel for the proponents of this coup. They started off with a whimper, broadcasting their election conspiracy theories from a small landscaping business located in between a crematorium and a sex shop. 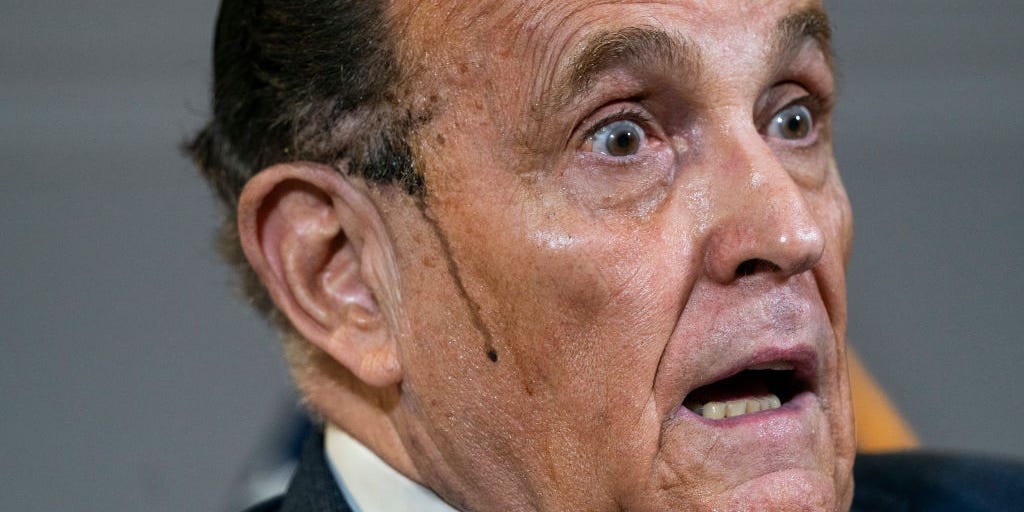 Then there was the scene we saw on Thursday, when Rudy’s profuse perspiration caused his hair dye to drip down the sides of his face.

The malfunction says nothing about the merit of his argument, but provides us with an apt analogy for the absurdity of this legal team’s larger goal. Reporters asking for evidence of Trump’s claims were met with misdirects and vitriol, illustrating that Rudy and his team will (quite literally) melt under even the most basic forms of journalistic pressure. This is the look of someone who is definitely not operating in good faith.

Rudy was followed up by another of Trump’s zany lawyers, Jenna Ellis. Never mind that Ellis called Trump an “idiot” in 2016, because now she’s here to defend him. She scolded reporters for complaining that the conference contained little evidence, saying that they didn’t “understand the legal process at all.” Yes, reporters would do well to understand the legal process as much as Trump’s team, who during the same conference referred to a scene from the movie“My Cousin Vinny” to make a point.

All the president’s men

Even more damaging to this coup’s already laughable reputation is the fact that its existence is making things more difficult for the party that ostensibly supports it.

Faced with a new president-elect, Republicans are rejecting reality and playing cute with Trump’s wild conspiracy theories. Instead of moving forward with a routine transition, most GOP lawmakers are refusing to do the bare minimum and acknowledge Biden rightfully won the election. And this has consequences: 70% of Republicans now believe that the election was rigged.

According to reporting by Politico, many prominent Republicans are afraid to even acknowledge Biden out of fear of appearing as traitors to Trump. The fear of recognising the win is hamstringing their efforts to prepare to oppose Biden’s appointments and agenda. The obsession with voter fraud and refusal to accept the results has left many of the party’s operatives in limbo. It’s hard to promote your post-election agenda when you are discouraged from acknowledging that there is a post-election in the first place. Even down-ballot Republican candidates are taking Trump’s lead by refusing to concede their races, leaving the party at large in a bit of disarray.

Perhaps the most embarrassing aspect of all is the fact that in the courts, Trump’s challenges are producing the exact opposite effect he’d like.

It is from a kind of grey area that Trump keeps pushing his voter-fraud message into oblivion. The claim can exist as long as it is not scrutinised, because once it is scrutinised, the game is over. However, by pushing for recounts and opposing certifications, Trump’s legal team is accidentally confirming the result of the election, because, again, there was no widespread voter fraud in the first place.

The cases are so lousy that even Trump’s hand-picked Supreme Court nominees don’t want anything to do with them. The Supreme Court has so far ignored an attempt by the Trump campaign in intervene in a case involving mail-in ballots in Pennsylvania. Michael Dorf, a constitutional-law professor at Cornell Law School, told Business Insider’s Jacob Shamsian that the delay â€” despite the state’s impending vote certification deadline â€” likely means that the Court wants nothing to do with Trump’s shenanigans.

It’s hard to predict what Trump will do in his waning hours of defeat. Pundit and talk show host Bill Maher has been adamant that Trump will not willingly leave the White House, and President Obama even joked that the Navy Seals may have to drag him out.

It’s clear that all of this is happening because Trump views his electoral loss as an embarrassment, but the embarrassment of the loss itself pales in comparison to the attempt to overturn it. However it ends â€” and it will end soon â€” this will go down as the saddest attempt at a coup in American history.