2 days before Trump and Melania tested positive for COVID-19, the Trump family broke venue rules and went mask-less at the presidential debate 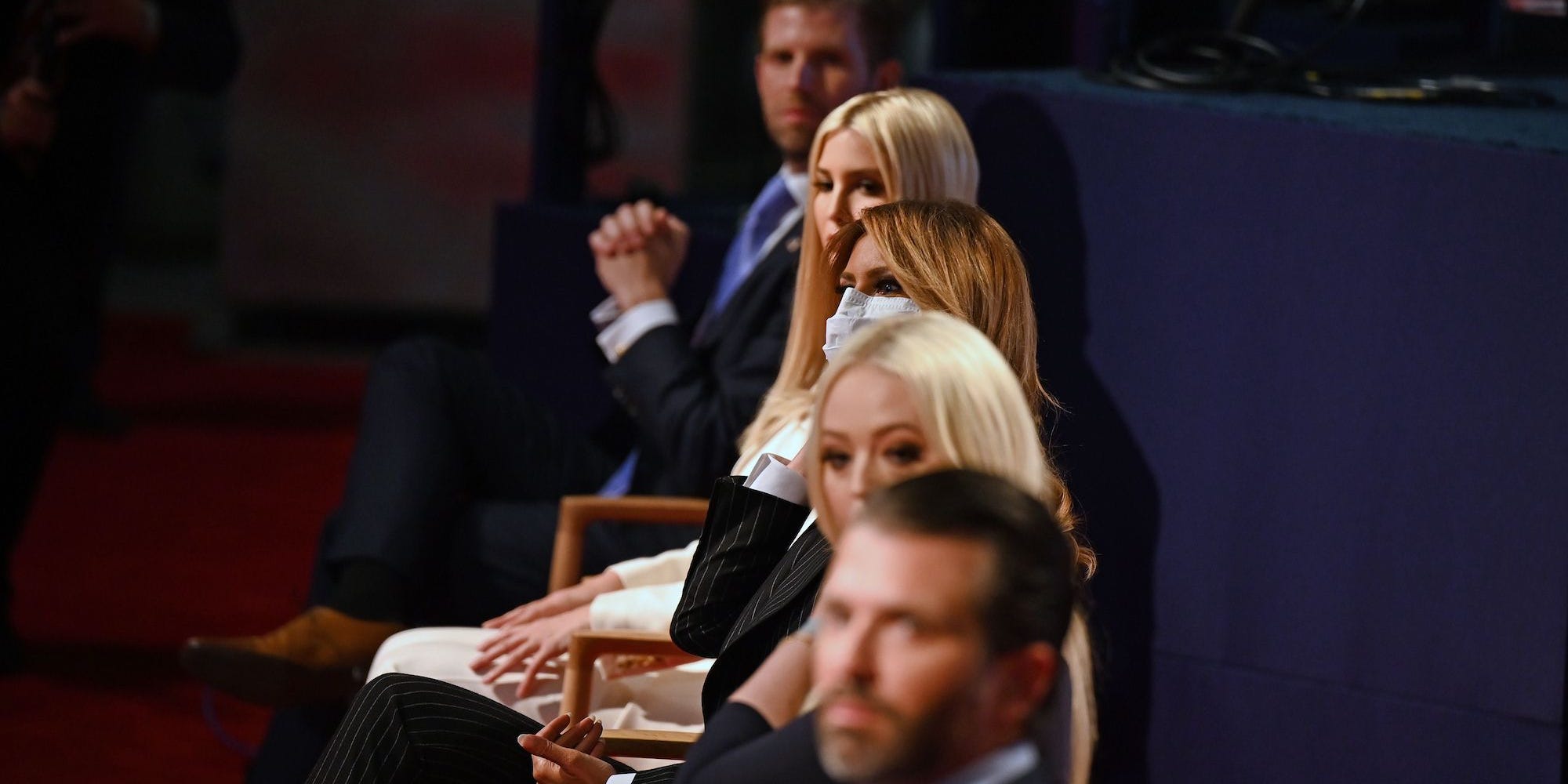 The presidential debate, held in Cleveland, Ohio, had multiple COVID-19 precautions, including setting seats far apart to adhere to social distancing guidelines, requiring attendees to wear masks, testing attendees, and asking Trump and Biden to refrain from shaking hands prior to starting the debate. In violation of these rules, multiple attendees, including some from Trump’s inner circle, removed their masks.

At the debate, Ivanka, Donald Jr., Eric, and Tiffany Trump wore masks while walking into the auditorium, but removed them when they sat down in the front row. In addition, first lady Melania Trump was pictured wearing one while sitting with them. But Tyler Pager, a Bloomberg News political reporter at the event, said she removed her mask after she sat down.

The President’s infection has sparked myriad concerns, from economic stability, to a potential spread of COVID-19 among the government’s top officials, to impacts on the presidential election, which is just 32 days away. The announcement also caps a long and contentious discourse about mask-wearing, which President Trump has repeatedly derided.

Trump mocked Biden for wearing masks during Tuesday’s debate. “I don’t wear face masks like him,” Trump said. “Every time you see him he’s got a mask. He could be speaking 200 feet away … and he shows up with the biggest mask I’ve ever seen.” 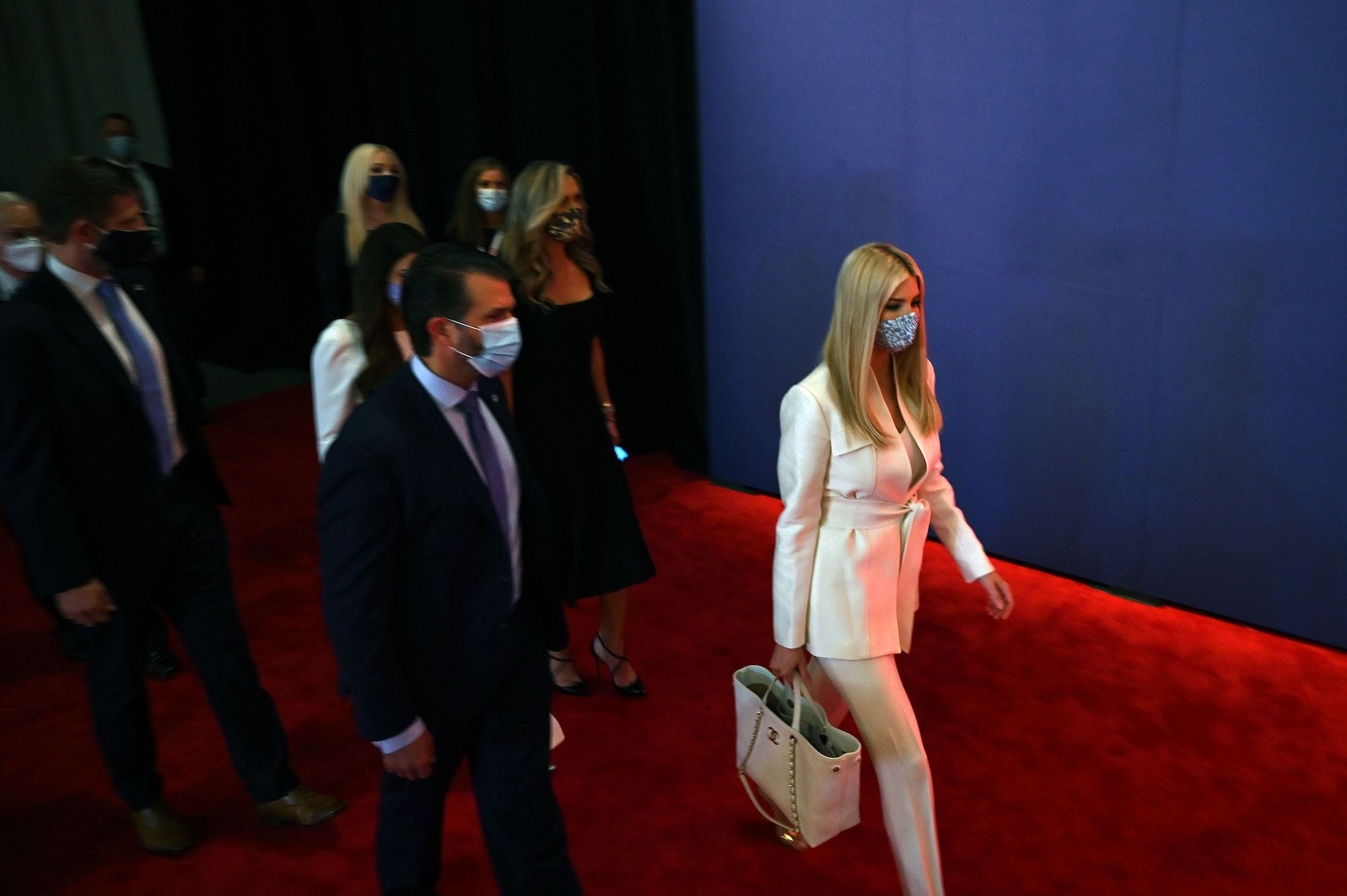 NBC News reported that a Cleveland Clinic doctor tried to approach the Trump children to ask them to wear masks as they entered the venue but that she ultimately couldn’t get to them.

Pager also said a doctor at the event told him that unmasked audience members on Trump’s side of the room refused to take a mask when offered one.

A Cleveland Clinic doctor with masks just walked up to a number of unmasked members of the audience on Trump’s side of the room and asked them to put on masks. She told me they refused to take one and wear them. https://t.co/rNUFjLfUEf

NBC News also reported that some members of the Trump administration who were there were not wearing masks.

Peter Eyre, a senior adviser for the Commission on Presidential Debates, told Cleveland’s WJW news station before the event: “There are things we’re doing differently this year that we haven’t done before because of COVID-19. That includes a variety of testing, social distancing, mask wearing and obviously reducing the total number of people who will be involved.”

People who were there to support Biden appeared to wear masks while seated, The Daily Beast reported.

This photo shows people on that side of the room wearing masks and Eric Trump not wearing one: 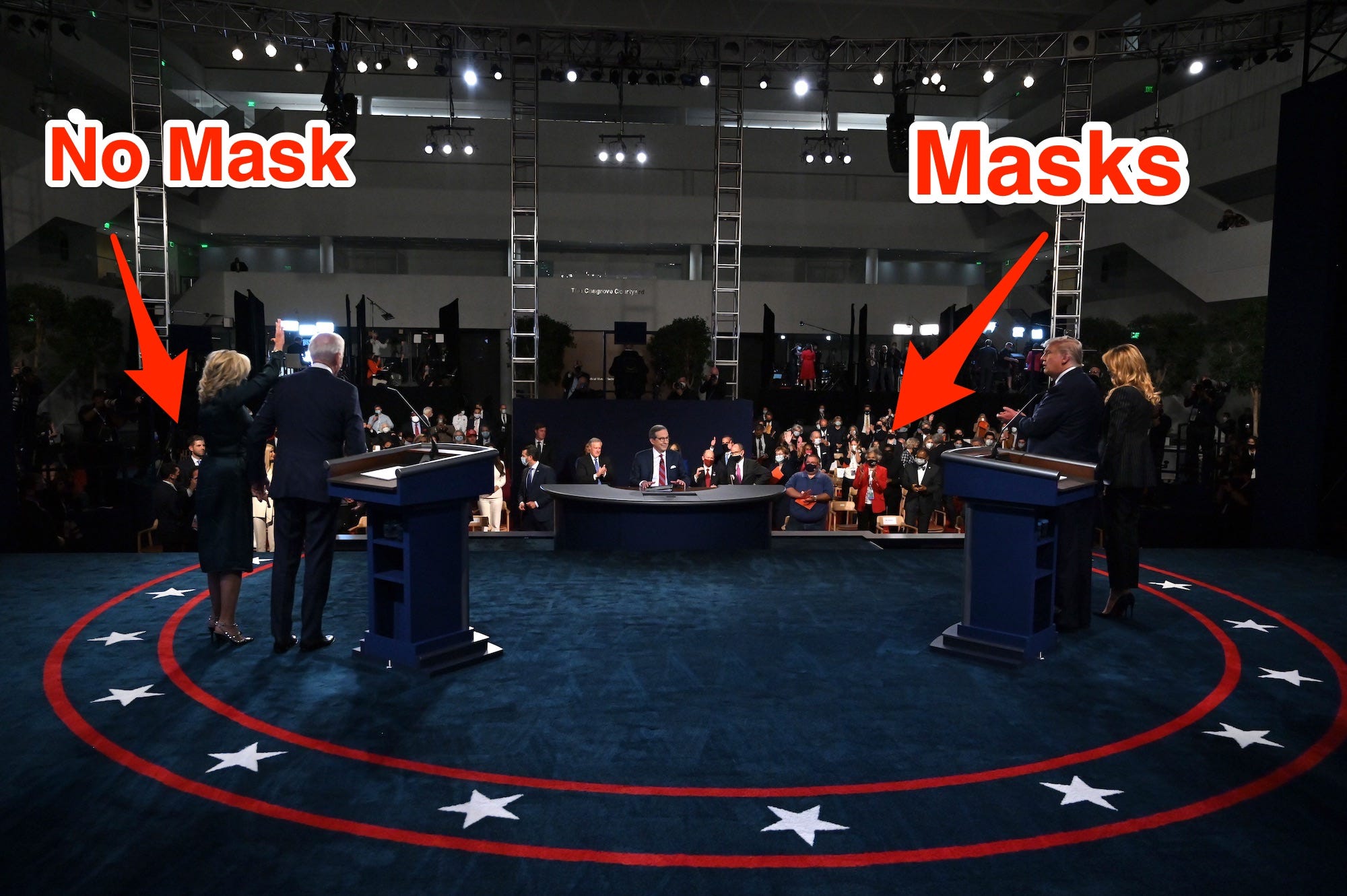 Olivier Douliery-Pool/Getty Images/Business InsiderMany supporters of Joe Biden wore masks during the debate. Eric Trump, the only Trump child visible in this photo, isn’t wearing one.

Biden’s wife, Jill Biden, wore a mask to greet her husband on stage after the debate, while Melania Trump did not.

Donald Trump Jr. told the Fox News host Sean Hannity after the debate that he had been tested for the virus and joked that he would face backlash for not wearing a mask unless he clarified that.

Eyre had said before the debate that all audience members would be screened for the virus. There was no suggestion that testing negative was a reason not to wear a mask.

Photos from Trump’s indoor campaign rallies have shown many attendees not social distancing or wearing masks.

More than 200,000 people in the US have died from the coronavirus, according to data from Johns Hopkins University. The US has the highest coronavirus death toll in the world.