Now that President Trump is banned from Twitter, it appears the rest of his family may have abandoned the platform, too 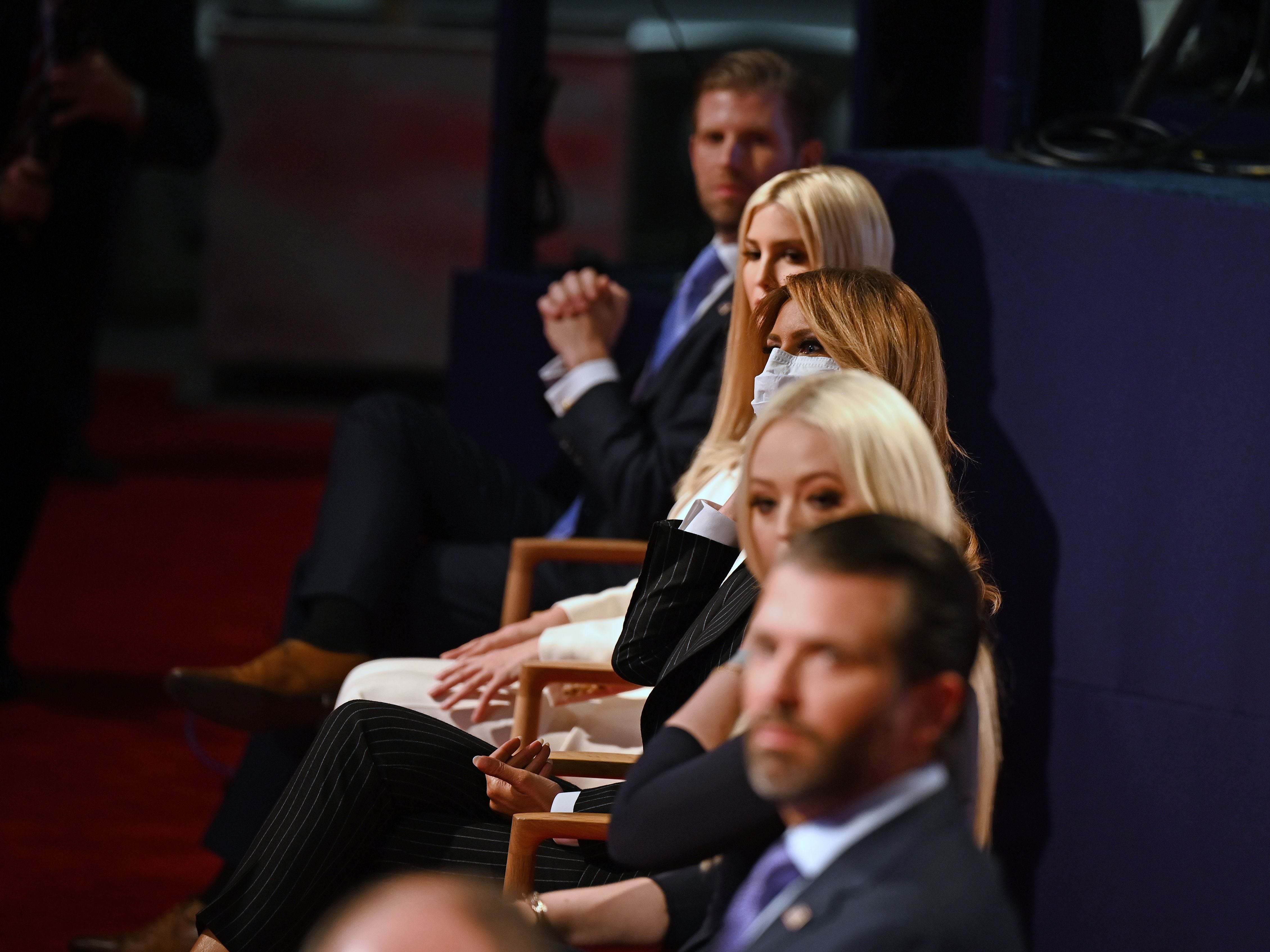 President Donald Trump’s personal account was permanently banned from Twitter on Friday, after weeks of back and forth between the president and the social media giant.

The president’s account was initially suspended on Wednesday during the insurrection at the Capitol Building, during which Twitter removed several tweets on the grounds that they were inciting violence. Additional tweets on Friday led to the president’s permanent removal, along with that of the Trump campaign’s Twitter account.

“After close review of recent Tweets from the @realDonaldTrump account and the context around them we have permanently suspended the account due to the risk of further incitement of violence,”Twitter said in a statement. “In the context of horrific events this week, we made it clear on Wednesday that additional violations of the Twitter Rules would potentially result in this very course of action.”

Trump’s inability to access the platform he’s relied so heavily upon during his presidency led to someone joking that he had simply created a new account under the name John Barron, a probably-fictitious Trump “press secretary” during the 1980s who often leaked favourable gossip about Trump to local tabloids.

Hello I am brand new to Twitter, what are you guys up to

Trump reportedly went “ballistic” after discovering the ban, but thus far, it appears he hasn’t turned to his family for social media help.

Last week Ivanka tweeted a message in which she referred to the mob at the Capitol as “American Patriots.” 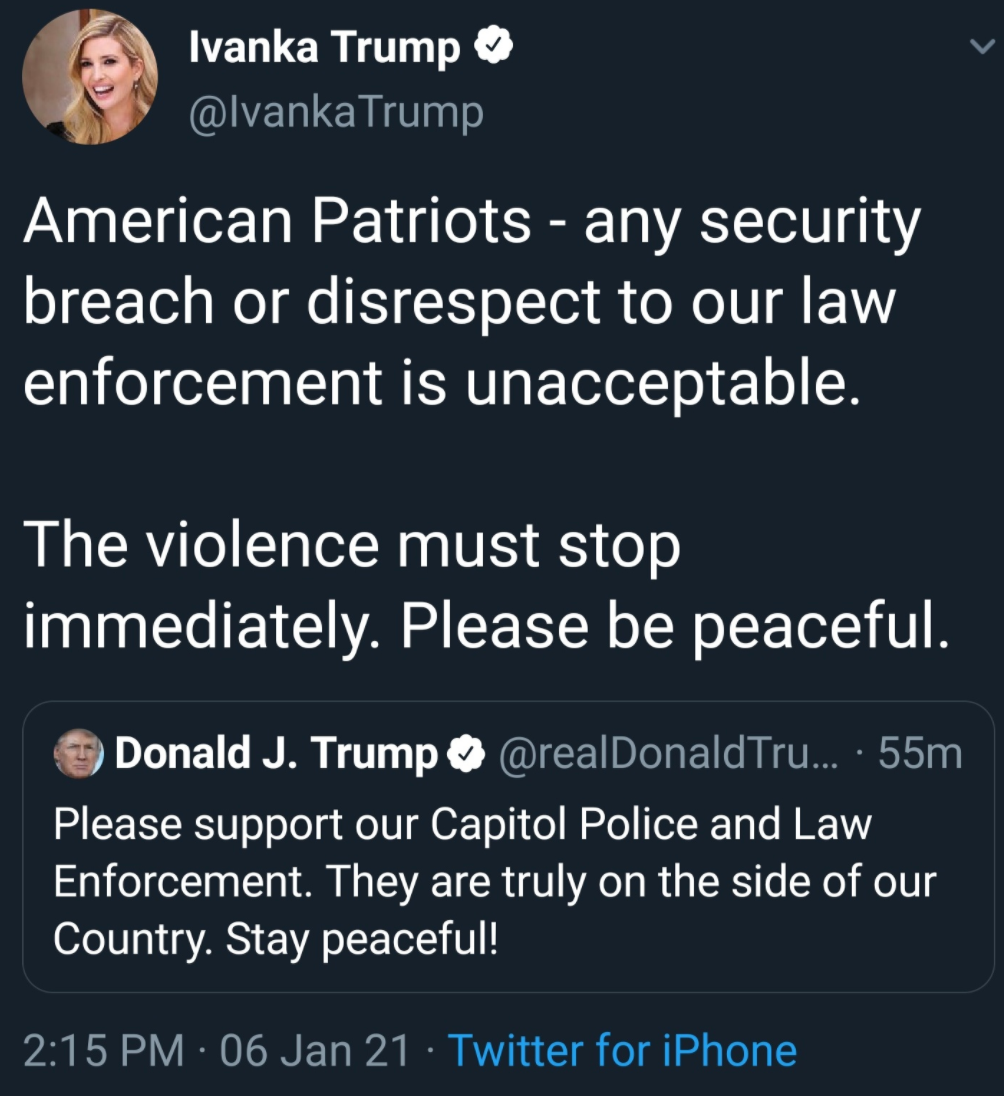 But when asked whether calling the insurrectionists “American Patriots” amounted to tacit approval of their actions, she deleted the tweet and responded: “No. Peaceful protest is patriotic. Violence is unacceptable and must be condemned in the strongest terms.”

In the afternoon of January 6, as Congress was undergoing a siege at the Capitol, Eric Trump tweeted an image of himself being serenaded by protesters who attended his father’s “Save America March.”

Never thought I would have 150,000 people sing me happy birthday on the National Mall in Washington D.C! pic.twitter.com/XXNW9p6wTQ

He then followed up that tweet with one published an hour later at 3:45PM: “We are the party of Law & Order – prosecute anyone who crosses that line to the fullest extent of the law.

Only Donald Trump Jr. has been a steady presence on Twitter over the last several days, using his account to retweet former “Saturday Night Live” comedian Rob Schneider, tweet about transgender women, and tweet and retweet concerns of censorship from conservative circles.

Trump Jr. spoke at his father’s “Save America March” on Wednesday, and said of Republicans who refused to challenge the election, “if you’re going to be a zero and not a hero, we’re coming for you.”

He’s also used the platform to launch his own website â€” which he’s framing as an alternative way to keep in touch with him, although it’s clear he’s still active on Twitter; he’s posted nearly three dozen times since January 6, the bulk of which are about President Trump’s Twitter ban violating free speech laws, even though it does not.

First Lady Melania Trump, on the other hand, seems to have avoided much of last week’s strife, both online and in person. While the siege of the Capitol building was taking place, Melania was reportedly overseeing a photoshoot of rugs.

FLOTUS hasn’t tweeted since January 1, when she wished her followers a happy new year and offered: “May 2021 be filled with the blessings of joy, good health & peace throughout the year!”