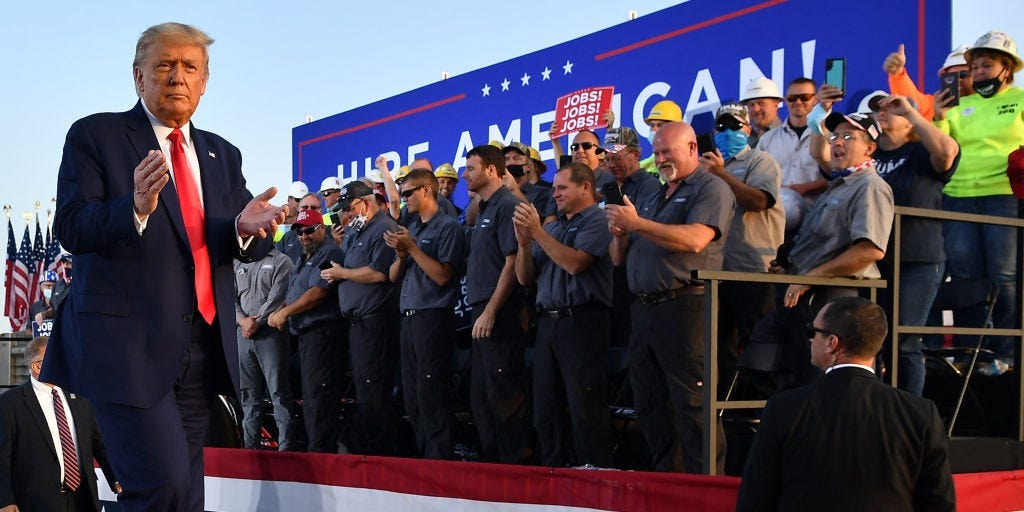 “This is a major fraud on our nation,” Trump added, with no evidence to support his assertion.

Trump also said he’d go to the Supreme Court, though it’s not clear why or what legal basis there is for the move.

Notably, Vice President Mike Pence did not echo Trump, saying instead that “We are on the road to victory.”

Votes had yet to be counted and certified in multiple states as of Wednesday morning, and legally every state still had time to do so.

#BREAKING: President Trump declares victory, says he'll go to the Supreme Court: "This is an embarrassment to our country. We were getting ready to win this election. Frankly, we did win this election." #ElectionNight

NOTE: Trump has NOT been declared the victor in the election. pic.twitter.com/OH8ZkfDMuJ

In the US, Americans don’t directly elect the president. Instead, states appoint a number of electors equal to the number of representatives they have in Congress to the Electoral College, a system that was devised in the 18th century by the founders of the United States.

This year, states must certify their results by December 8, also known as the “safe harbour” deadline. On December 14, electors are set to convene in all 50 states and the District of Columbia to formally cast their votes for president and vice president.

Not long after Trump’s statement, the Biden campaign responded by accusing him of “a naked effort to take away the democratic rights of American citizens.”

Biden’s campaign manager, Jen O’Malley Dillon, said in a statement: “The president’s statement tonight about trying to shut down the counting of duly cast ballots was outrageous, unprecedented, and incorrect.”

Dillon said that if Trump did indeed try to dispute any votes in court, that the Biden campaign would fight the attempts in court.

Trump’s announcement early Wednesday came after months during which he cast doubt on the integrity of the election process and claimed without evidence that an increase in mail-in voting prompted by the COVID-19 pandemic would lead to widespread voter fraud and a “rigged” election outcome.

More recently, the president maintained that the results of this year’s election should be decided on election night, even though results are never finalised that way. It’s a normal part of the electoral process for ballots to be counted days or even weeks after voters go to the polls, though news organisations often make projections sooner.

Read more: How Kimberly Guilfoyle, the ‘human Venus flytrap,’ has groomed boyfriend Donald Trump Jr. into a political powerhouse and turned herself into a conservative star

As Business Insider previously reported, it was unlikely that the American public would be left hanging for days on end. Of the 10 main battleground states, seven â€” Arizona, Florida, Georgia, Iowa, Ohio, North Carolina, and Texas â€” allow election officials to start processing and counting ballots on or before Election Day.

Trump’s move to prematurely declare himself the winner of the election was not particularly surprising, as he repeatedly refused to commit to a peaceful transfer of power, saying in September: “Well, we’ll have to see what happens. Get rid of the ballots and we’ll have a very peaceful â€” there won’t be a transfer, frankly, there’ll be a continuation.”

On the weekend before Election Day, Axios reported that Trump had privately described plans to declare victory on election night if it appeared that he was “ahead.”

“I think it’s terrible that we can’t know the results of an election the night of the election,” Trump added, once again ignoring the fact full, finalised results are never available on election night.