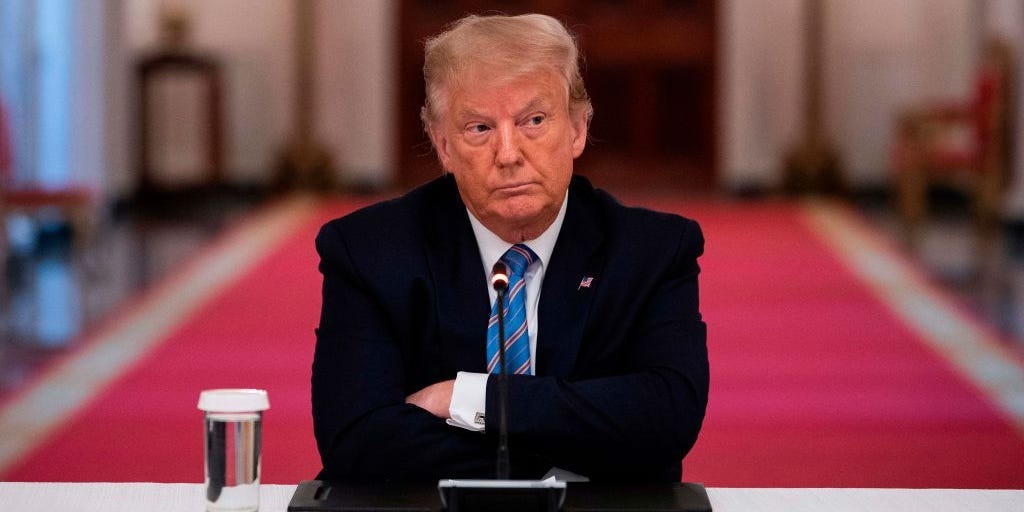 Photo by JIM WATSON/AFP via Getty ImagesPresident Donald Trump at a roundtable discussion at the White House on July 7 on reopening schools.

President Donald Trump on Thursday evening denied having ever called Sen. John McCain of Arizona a “loser,” despite having previously tweeted out a news article that described him doing exactly that.

Trump and his senior officials on Thursday attempted to deflect the blowback from an article published in The Atlantic that quoted several unnamed sources who said the president had made disparaging remarks about US service members â€” including those who died in battle and those who went on to become notable politicians.

The Atlantic’s sources said Trump referred to McCain and President George H.W. Bush, two former US Navy fighter pilots, as “losers” for being shot down in battle.

The Atlantic also reported that Trump was angry when McCain received half-staff flag honours after dying of brain cancer in 2018. Trump was said to have told his staff of McCain: “We’re not going to support that loser’s funeral.”

Trump tweeted a response to the claims made in The Atlantic. He acknowledged that he “was never a big fan” of McCain and that he “disagreed with him on many things.” Still, he said, he “never called John a loser.”

But Trump did describe McCain as a loser, citing his capture by enemy forces.

“I like people who weren’t captured,” Trump said at an Iowa summit during his presidential campaign in 2015, adding, “I don’t like losers.”

On July 18, 2015, Trump also tweeted a link to a political blog that quoted him at the same event.

“Via @fitsnews: ‘Donald Trump: John McCain is ‘A Loser,'” Trump said in a tweet with a link to the blog.

Trump also denied having disparaged US service members who were killed during World War I. The Atlantic reported that after calling off a 2018 trip to the Aisne-Marne American Cemetery near Paris, Trump told senior staffers that the cemetery was “filled with losers” and that US Marines who died in the Battle of Belleau Wood were “suckers.”

Trump told reporters Thursday that The Atlantic’s sources were “lowlifes.”

“I would be willing to swear on anything that I never said that about our fallen heroes,” he said. “There is nobody that respects them more. So, I just think it’s a horrible, horrible thing.”

The White House chief of staff, Mark Meadows, said on Thursday that the president denied the allegations made in the report “in very emphatic terms,” adding that, “He was more offended by them.”

Following The Atlantic’s report, The Washington Post also reported that Trump frequently disparaged veterans and troops missing in action, also calling them “losers.” Citing a former senior administration official, The Post reported that Trump told senior advisers he didn’t understand why the military so valued finding missing troops. He said if they were captured, they deserved what they got, one source told The Post.